Seniors Are Filling Their Prescriptions - At a Pot Shop

The 55-and-older crowd is now the fastest-growing demographic of pot users in the country. Between 2013 and 2014, the number increased from 2.8 million to 4.3 million.

In California, where medical marijuana is legal, seniors are learning how to fill their prescriptions – at a pot shop. They want to know the highs and the lows of marijuana use for the aches and pains of growing old, reports CBS News correspondent Barry Petersen.

Eva Aguillara, 80, uses it to help with mobility.

"Every medication has a risk. I've made my choice," she said.

Seniors account for only 14 percent of the nation's population, but they use more than 30 percent of all prescription drugs including some highly-addictive painkillers. So pot is fast becoming a pill alternative. Marijuana use is up 53 percent with the 55-and-over crowd.

Harborside in Oakland is one of California's largest medical dispensaries. Owner Steve DeAngelo wants more seniors to make the switch.

"There's an ironic, almost tragic phenomenon, which is that seniors, who are one of the groups who can most benefit from use of cannabis, are the single group which remains most opposed to reforming cannabis laws," DeAngelo said.

That opposition started when seniors were just juniors, kids growing up with movies like "Reefer Madness" and government anti-drug campaigns.

It's still illegal under federal law, but now almost half of Americans live in a state where medical or recreational pot is legal.

Leland Rucker lives in Colorado, where two years ago, pot went on sale for recreational use. Rucker has been using it since the '70s.

"It's been a really positive thing in my life. As a writer, it's the best way— being stoned is a good way to work," Rucker said.

Research is now showing marijuana can be helpful.

Dr. Igor Grant has a rare federal grant to study the potential benefits of pot.

"It's certainly true that cannabis and THC have a much better safety profile than the opioid drugs... and are less physiologically addicting. So they're safer. That doesn't mean they're completely safe. ... Nothing is completely safe. There is no panacea here," Grant said.

Like the times, minds are changing. This year marijuana use is expected to appear on the ballot in at least a dozen states.

Certainly not anyone we know. 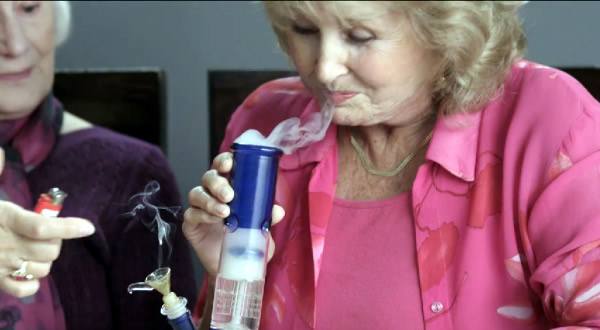 C
Seniors Are Filling Their Prescriptions - At a Pot Shop