I'm using the same large wardrobe box but no fan or filter for me. Just holes up and down the sides for airflow.
I don't know how you guys are getting a slow dry using an exhaust fan. Last harvest I dried in my little veg tent with an 11w duct fan I use as an exhaust and it dried them out too fast in 4 days, even at 45-55rh. I like to shoot for 6 to 7 days minimum before I jar.
Thanks to the OP because this is where I found out about the box years back.

my type of bulding

This is what I will be doing. writing things to buy list

Freezy said:
Here's a question - can I do a closed loop system that circulates air in from the bottom of the box, then out of the top into a box full of boveda packs (or maybe desicate packs at the beginning) and then back inot the bottom of the drying box?
Click to expand...

Freezy, sorry for the late reply and hopefully everything worked out OK for you, but I would recommend AGAINST recirculating the air. The objective is to REPLACE the air in the box with fresh air to avoid the buds getting moldy. I hope you were able to avoid this!
F

A lot of these boxes are pretty great. I was going to build one myself but due to time constraint I just ended up using my 4 x 8 veg tent to dry and it worked mint. Saved a lot of time and it was very easy. I used a 6" inline fan sucking from outside the tent and blowing through an old carbon filter (just so it wasn't blowing any dust into the tent). I just ran a bunch of strings across the tent and hung from those. To limit the airflow I zipped up the whole tent except for one vent I left open on the opposite side of the fan. Humidity stayed right around 55% and I got a nice even dry. They hung for almost 6 days and if you use the bovedas and glass mason jars you can almost set it and forget it minus a 15 minute burp here and there. I'm sure you could use smaller tents too so considering the cost of a small tent on amazon its almost worth it to just buy one of those and hook up a weak inline fan.

Regardless, the creativity and ingenuity here is mint! I was told, after talking about building one of these boxes out of cardboard, that cardboard and dehumidifiers etc actually are not great for the terp content but that's just hearsay don't take that as fact.

Mr. Krip I just have a habit of over complicating things lol. I did not do anything I said I was going to a few months ago.
New Sealed Room - New Strains - New CXB3590 Lights - Organic, Super Soil, DIY COB Setup
R

Great set up.
How is the smell when drying?
Should I try and vent to outside?
Cheers
Rookie16

Rookie16 said:
Great set up.
How is the smell when drying?
Should I try and vent to outside?
Cheers
Rookie16
Click to expand...

The smell depends on the strain, of course, but as I've pointed out, this drying box is has odor "control" and not odor "elimination". If you want to eliminate odors, you'll likely need a carbon scrubber. I many cases, the dry box alone conceals the smell enough that even walking into the room, it's not noticeable, but I wouldn't want to "bet the farm" on it!

Thanks for the reply.

blazes garden of weeden getting orgasmic with organics -complete

Blazinjones said:
Wen u say hav the exhaust stronger then ur intake do u mean the holes for the exhaust jus b bigger than the slits for the intakes
Click to expand...

I'm not sure specifically which quote you're referring to, but it's likely I was referring to creating negative pressure. To do this, you simply need to be exhausting the air quicker than it's coming in. So, if you use a fan for exhaust, you just need a passive intake small enough to create that negative pressure.

For example, if you look at my grow tent when zipped up, you'll see the sides sucked in. That's the "negative pressure". The "bottleneck" is the intake.

When you have this negative pressure, all of the air is forced through the carbon scrubber (which is connected to the exhaust fan), so all odor is eliminated.

If you used the fan for intake instead of exhaust (or, had a stronger intake fan than exhaust fan), the sides of the tent would bulge out, creating positive pressure (like blowing up a balling with a pinhole - Air goes in faster than it goes out!). This means some of the NON-filtered air would be forced through the seams and other openings (cable ports, etc.) in the tent causing odor in the room.

Let me know if that didn't answer your question!

Might be way premature but I am going yo get some cardboard to fix this today!! ( my seeds haven't surfaced yet lol)

I did a Krip style DIY bud drying and 48 hour darkness box with ventilation. I repurposed a blower fan from a monitor heater that no longer works. 12000 btu AC box.


Carbon filter before I installed the fan. Will that keep out enough light or should I add some ducting? 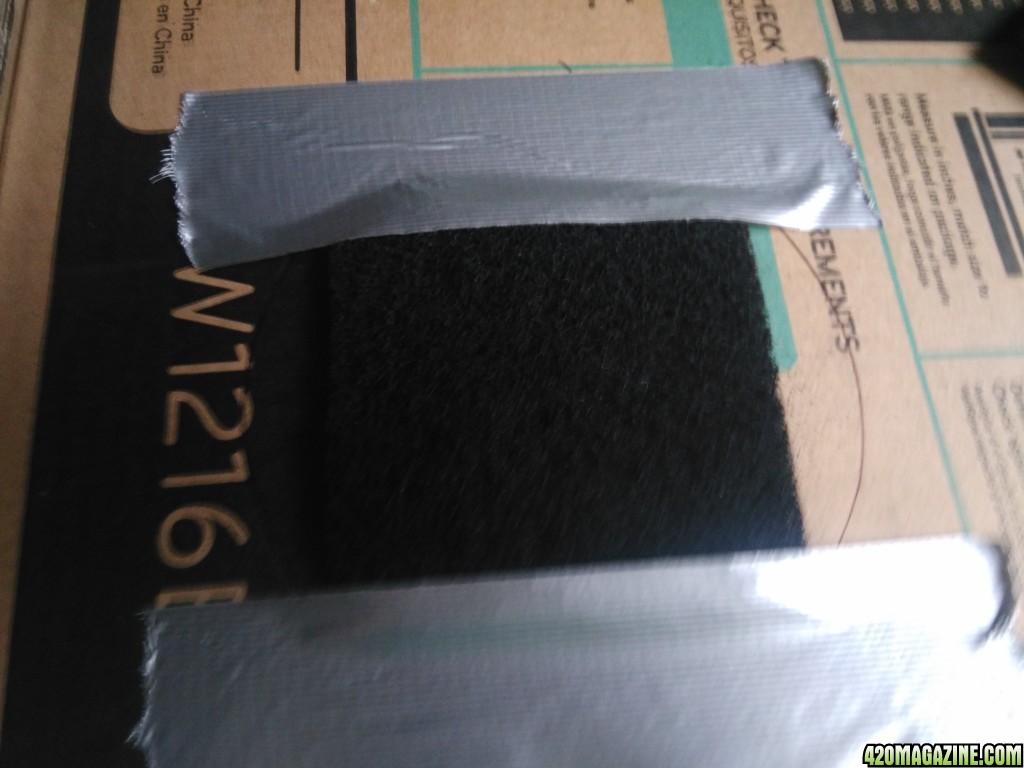 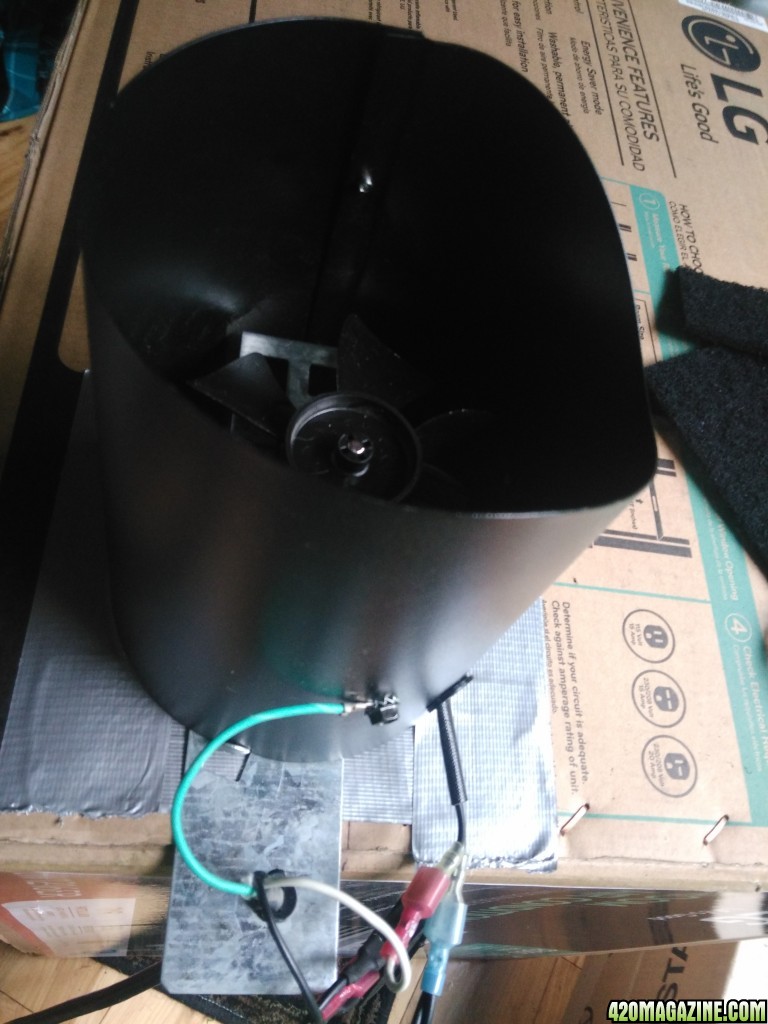 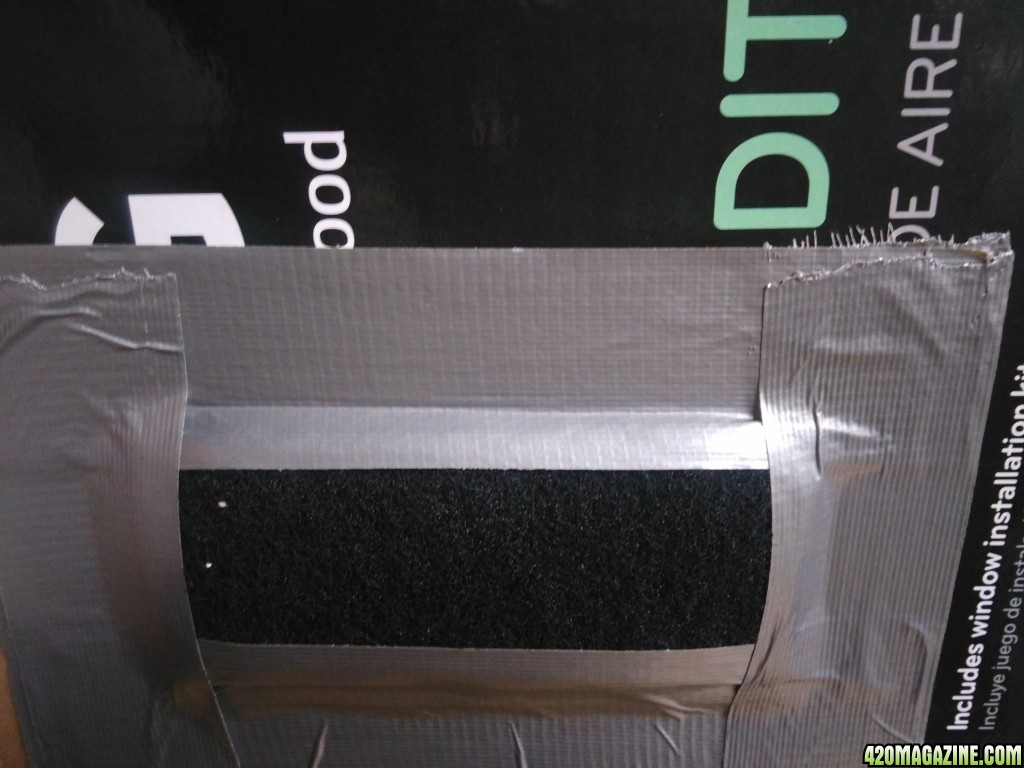 Time to get some buds in there. 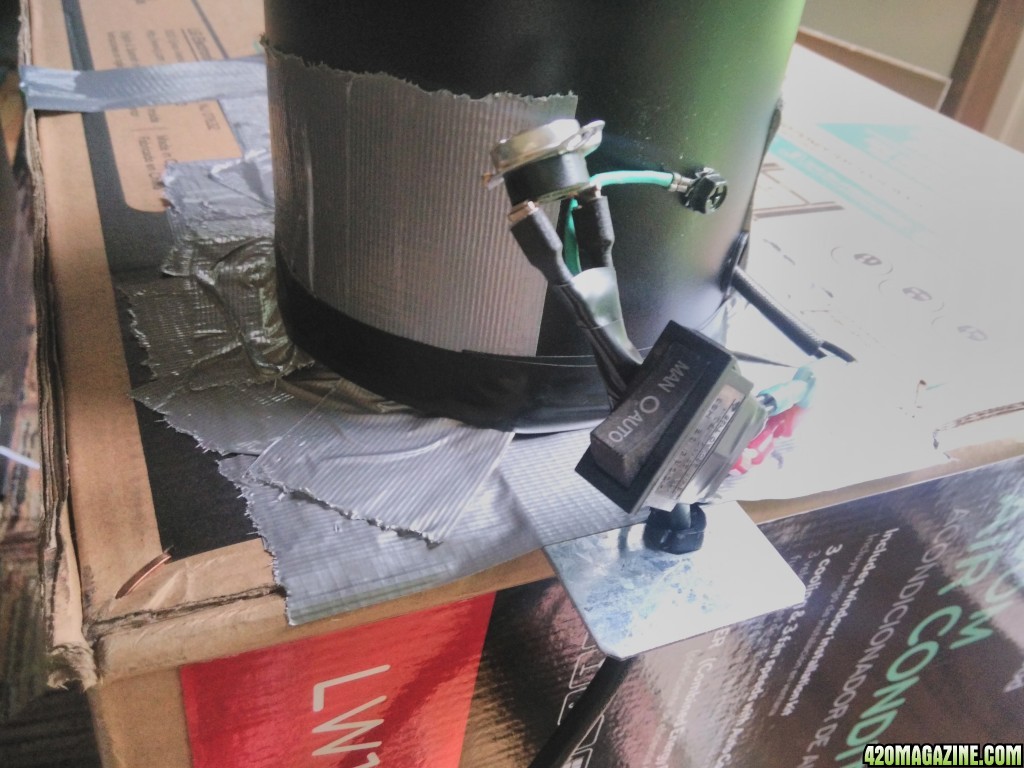 420 Staff
Nice work! You don't need total darkness on the drying box, so it should be fine!

i actually had a spare u-haul box left over from work and i was planning on using it just like you did.

however, i hadn't figured out the odour control part of the equation yet!

so thank you so much for your great idea/post.

I did a Krip style DIY bud drying and 48 hour darkness box with ventilation. I repurposed a blower fan from a monitor heater that no longer works. 12000 btu AC box.


Carbon filter before I installed the fan. Will that keep out enough light or should I add some ducting?

Time to get some buds in there.

That is an awesome solution. I was wondering how I could do this outside of the grow tent.
K

Leaving the box outside good idea or bad???

Kingblizz said:
Leaving the box outside good idea or bad???
Click to expand...

I would call it "risky" rather than "bad". You would need to protect from rain, bugs, rodents, high winds, THEFT, etc. and still be able to somewhat control the environmentals.
K

Mr. Krip said:
I would call it "risky" rather than "bad". You would need to protect from rain, bugs, rodents, high winds, THEFT, etc. and still be able to somewhat control the environmentals.
Click to expand...

Oh man this sucks...just trying tp figure out not stinking up my house lol...thanks for all the help

Kingblizz said:
Oh man this sucks...just trying tp figure out not stinking up my house lol...thanks for all the help
Click to expand...

The dry box was effective at controlling odors. It didn't totally eliminate them, but unless you were sitting in the same room as the box, you couldn't smell anything anywhere in the house. The odor from the box wasn't a strong MMJ smell, but more of a dank smell of evaporation (if that makes sense!).

Multi Tent Scrub Box How To: multiple tents with one fan and one carbon filter