How To Clone A Cannabis Plant

420 Staff
Ok guys lets do some cloning. There is tons of info about this subject already but people will always ask for more info. I think the reason for this is because most people are afraid to cut their plant. They are not fragile. Pruning and cutting usually will increase bud production. It doesn't really hurt the mother plant, the only real stressful part is on the cutting itself. Cloning is the most traumatic experience a clipping via clone will endure. You are forcing a clipping to transform into a growing plant. We are making a stem that was growing leaves to all of the sudden grow roots and undergo severe changes to survive. Because of this you should take more cuttings than you need. Don't worry, it gets easier.

Cloning. MJ plants can reproduce sexually or asexually. Seeds are from reproducing sexually while clones are propagated asexually. To be technical cloning is taking cells from the plant (for growers that means cuttings) and promoting its growth to become a plant all its own.
Before we start Lets talk a little about the good points and the bad points to cloning.

Good points are as followed. It reduces the the time to having a mature plant. You don't need high power lights to start clones, florescents work very well for cloning.Since clones are genetic copies of thier mothers all clones will be the same sex. Taking a clone and flowering it will tell you what sex your soon to be mother is. Since clones are genetic copies, they grow at the same rate so other techniques like SOG (Sea of green) or SGROG (screen of green). The older the mother is the easier it is to induce flowering.

Here are the bad points. Clones grow slower than a F1 hybrid will because of the lost of its hybrid vigor. This also means a F1 can grow about 25% bigger than a clone. You have to start with a good mother because all the characteristics of the mother, the clones will have the same. Clones are less disease and pest resistant because of the trauma a clone has to undergo to become a plant. You need at least two different growing areas, one for veg and clones, the other for flowering. Some plants are very diffacult to clone or its just not possible. Like certain unstable hybrids, Sativa with early flowering properties, or the Ruderalis with autoflowering properties like the Lowrider.

Preperations for cloning. Clones develop a stronger and faster root system when they have a high carbohydrate and and low nitogen concentration. Flush your plants one week prior to taking cuttings and feed only water for that week. Just don't drown your plants. Since I do hydro it makes it a ot easier, just change the water in the res every other day for a week. Reverse folier feeding will also help leech nitrogen from the leaves. Just fill spray bottle with water and mist your mother heavily eryday once for three to five days. Hormone content is different in different parts of the plants. The bottom of the plant has more hormones in it so the lower branches tend to root better and faster than towards the top of the plant. There are many cloning compounds out there but I prefer the gel. It coats evenly and sticks to the plant well. Which ever you use just read the instructions and make sure its for use with edible plants.

Now its time to get ready. Clean and disinfect your work areas and tools. Always use sharp scissors or a razor and clean with alcohol. Have everything ready and within easy reach like rockwool, scissors humidity dome ect.

Cloning, step by step.grab a firm branch and cut at a 45 degree angle and take a cutting about two to four inches in length. To not damage the bottom of the cutting. Trim off the lower leaves and node points. Then place cuttings in water. A embolism is a air bubble that can get trapped in the stem and kill the clone, this is the reason to soak cuttings in water until your ready to put in grow medium. Make sure the ph is between five and six. Do not fertilize the clones. 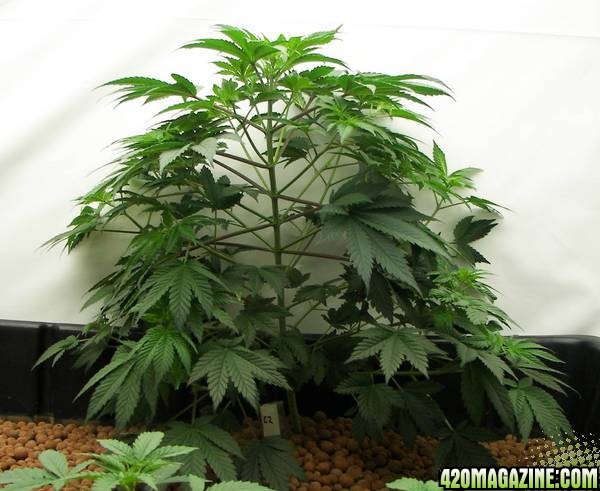 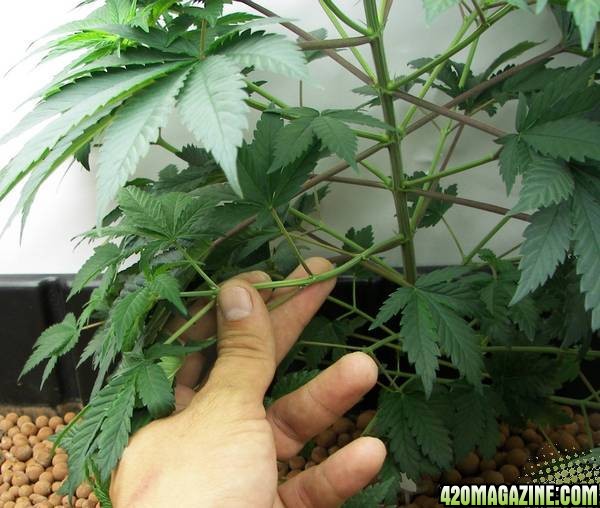 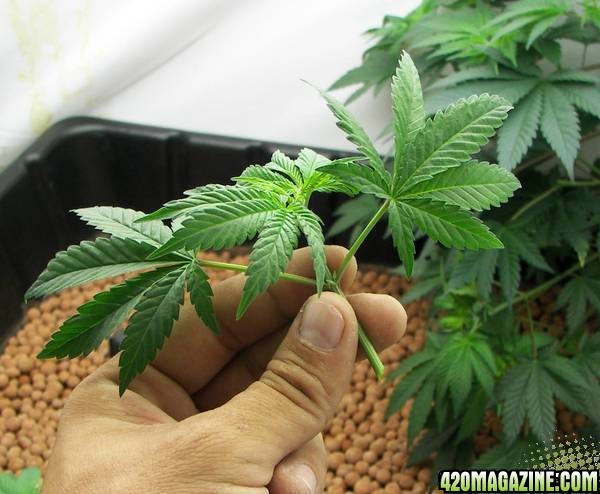 Same cutting but removed the lower leaves and node points. 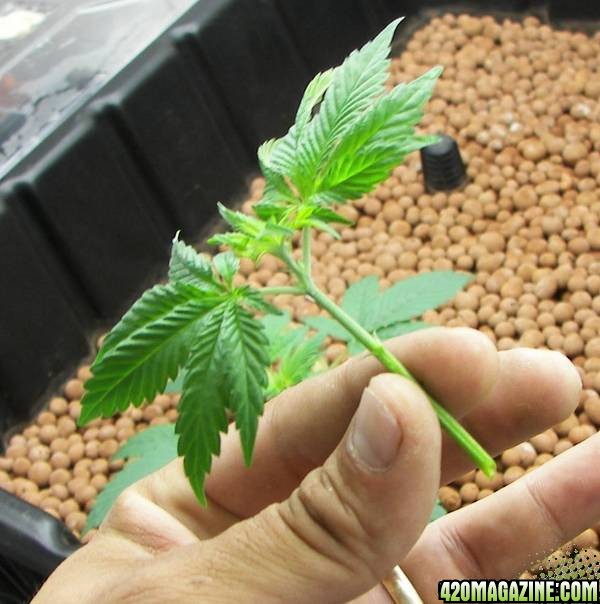 Split the end to create more surface area for roots. I chose this method because is causes a stronger root system. Only draw back is it takes more time to root. 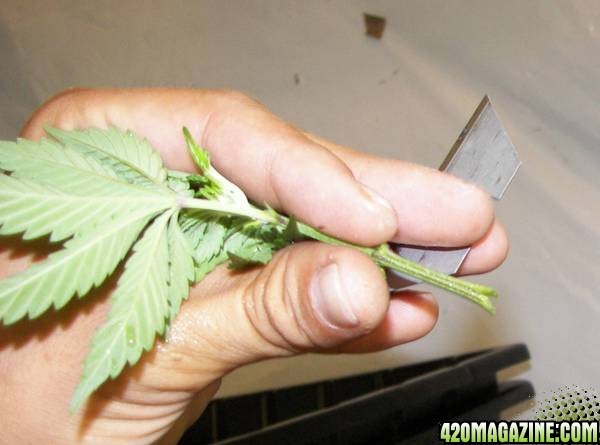 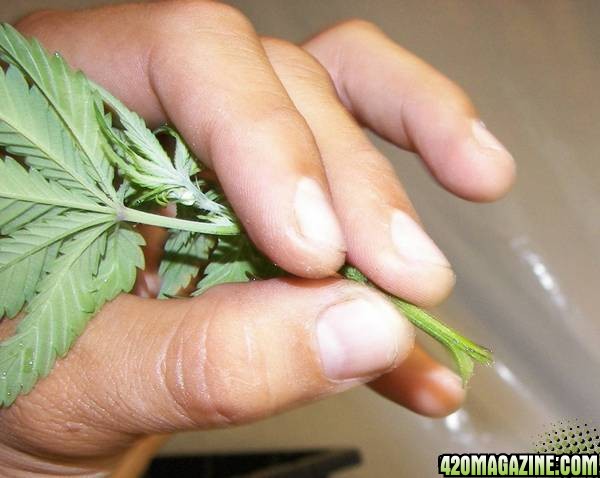 Dip end in cloning gel. I hope my rooting hormone still works. It is old and has turned into a liquid. 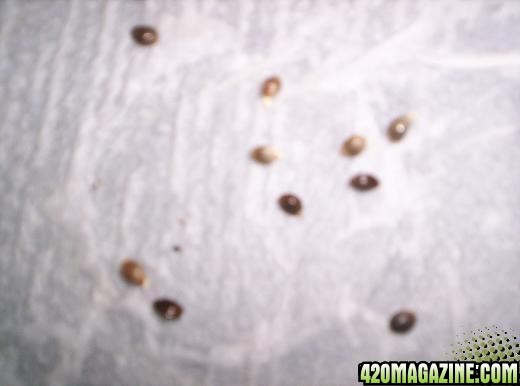 Put clipping in rockwool or whatever growing medium. Make sure its very moist and that you press or fill your medium around the hole to keep air away from the rooting area 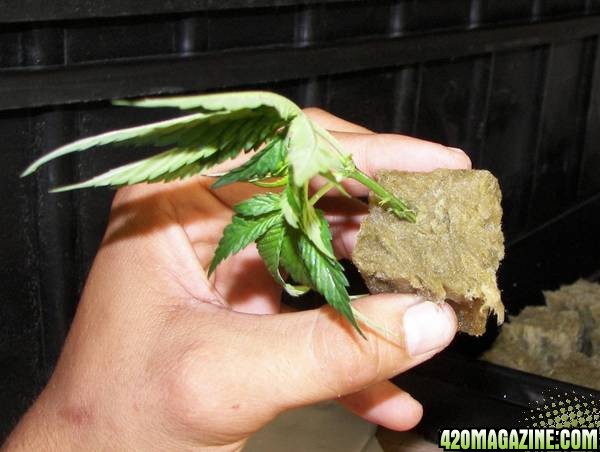 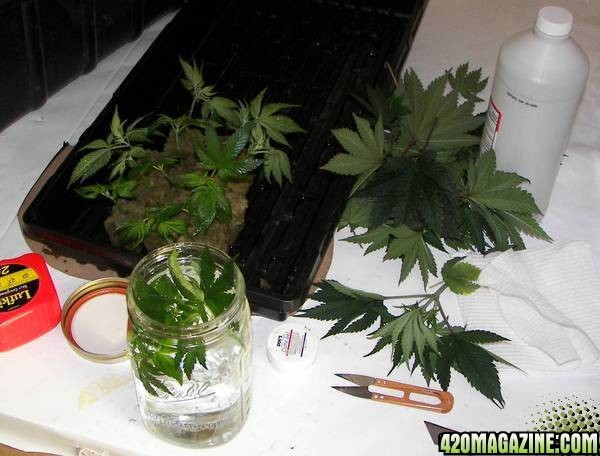 I like to spray the dome to give a humidity boost. 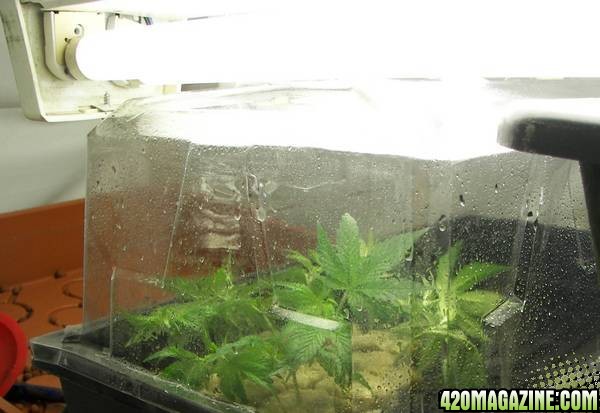 In about two weeks I should have some clones.

Pic of mother chronic after final pruning and topping. 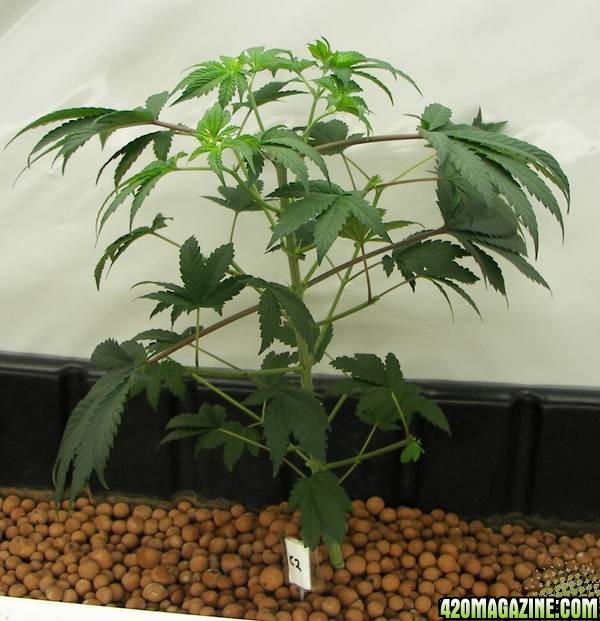 I've always had problems cloning this should help thanks

Is it necessary to remove the lower leaves and node points I neglected to do so because I didn't want to shock the clipping even more..
Everything I post Is Entirely Fictional and all pictures posted were found on the internet​

Here Is A Link To My Fictional Grow

Very nice write up thanks.
K

After they grow roots, How long do you gotta wait to start flowering?
My first grow white widow

klep420 said:
After they grow roots, How long do you gotta wait to start flowering?
Click to expand...


It's up to you some people have grows on here where they grow 12/12 right from the start.
Everything I post Is Entirely Fictional and all pictures posted were found on the internet​

Here Is A Link To My Fictional Grow

Thanks
My first grow white widow

With the cloner, following the same processes outlined by the 420 founder, we let them settle for usually 48 hours and then put the light on them. We are converting mediums right now and just started the first set from cloner to soil, instead of rockwool and pebbles. With the information from this forum, we may convert from cloner to peat soon. We do not use the dome though.

thanks i'll give it a go
I

Finally, a walk thru wit pictures...

THis is a great step by step tutorial and exaclty how i do it too, but i do add an extra step, i clip the tips of all of the leaves of the clones, i have been told and saw my caregiver do this. this makes the clones root faster as it sends a hormone down the stem faster producing roots.Has anyone heard of this ? it seems to work for me..
tintala's Gallery of Ganja
:rasta:

what is the name of the cloning gel you used?

tintala said:
THis is a great step by step tutorial and exaclty how i do it too, but i do add an extra step, i clip the tips of all of the leaves of the clones, i have been told and saw my caregiver do this. this makes the clones root faster as it sends a hormone down the stem faster producing roots.Has anyone heard of this ? it seems to work for me..
Click to expand...

The hormones don't go anywhere. They are already there. They are stored in the cambium layer of the stem and to help a clone with rooting it's best to scrape some of the outer bark/layer off of the bottom of the stem to expose more of the cambium layer.
Clipping of the leaves stops the plant from transpiring (sweating) so much. A clone can only uptake so much solution. if it's sweating out more than it can take in it will wilt, dry out and die. Transpiration is a normal part of life for plants. With clones you want the cutting to spend more of it's energy forming roots than trying to grow leaf or transpiring so you clip it's leaves which keeps the plant from having the ability to sweat/transpire a lot. Another way to slow transpiration is to keep the cuttings into a high humidity dome. The humidity keeps the leaves moist so they don't have to transpire their own moisture.
Last edited: Apr 26, 2009
420 Magazine-Grow Support

Lightly scrape the skin aroung split stem to expose more of the cambium layer.
The cambium layer is where the plant generates roots.
Click to expand...

Racefan thanks so much for posting this invaluable info!!!! now I know exactly what i did wrong. +rep for u
A

great talk thro sticky ... the use of pics is of great benefit ... cheers , perhaps a mention of cutting the final 45 degree cut is best done under water, preventing o2 bubbles....that and daily or every other day spray too keep the humidity high.

a great section for newbies, and those that need a quick refresher ... thanx sticky...nd the advice about lightin for clones...top drawer, a great bit of advice to those not aware, blue light is the one for cuttings,seedlins, etc....the orange flowerin bulb induces ( for me anyway) the plants sex, so for clones and cuttings etc i have seperate area with energy efficient bulbs. they r big nd bulky but cheap to buy nd run....top tip sticky

How do you clone