I found another journal/diary site before I found this one so I was a little more active there than here. Since I have been doing more research I have found this site and community better than the other site so I have mostly migrated here. I figured I would move my journal here.

I am about 3 months in give or take a couple weeks. I have 4(maybe 3 - 6, I stopped counting) weeks from there I will post here and a couple pictures I have posted in different threads here but for consolidation purposes I will post here.

I am growing CBD Mango Haze from CBD Crew and GG4 from Ethos. The GG4 is for my nephew for his birthday. We talked to extent to figure out if this was a project he was willing to undertake, if he was interested, what strain he watned etc. He seems a little defeated because one of his died (we poped two each) and one of mine is like three times the size of his though it's definitely growing.

I made a lot of mistakes that I hopefully have learned from for my next grows. I waited to long to transplant in the beginning, I overwatered and I am probably missing a few. So I think for my next grow I will start in one gallon pots as they are easy to transplant and fill the bottom 1/4 to half with the nutrient rich dirt they will be transplanted into when ready and use a lighter airy seedling dirt for the top. Plus one gallon seems like it will allow the plant to be better established for the transplant if I am only looking to do it once. Though I may use a smaller pot 1/4 - 1/2 gallon/ 4 - 6 inch diameter as the seedling dirt will only go badif it sits a long time which it will. Filling it a 1/3 - 2/3 with nutrient rich dirt. Still only transplanting once is my plan.

This is my first grow... 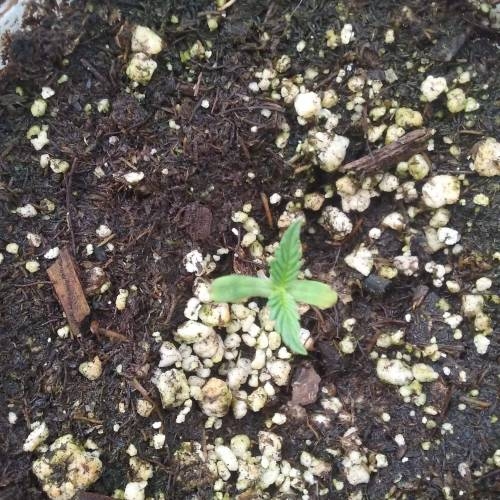 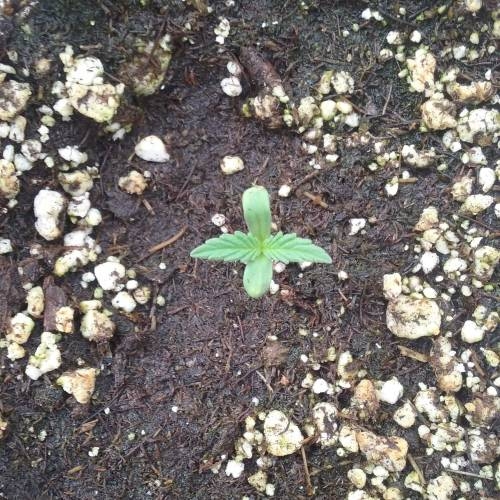 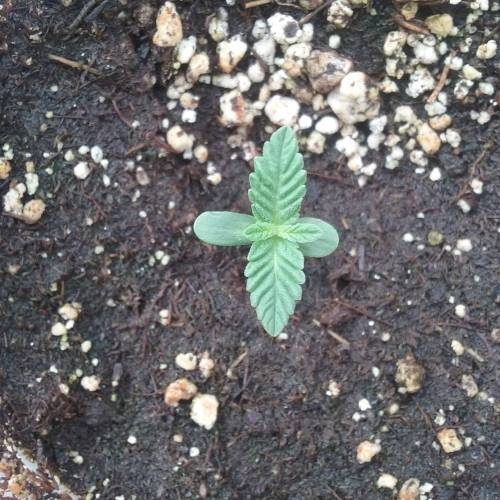 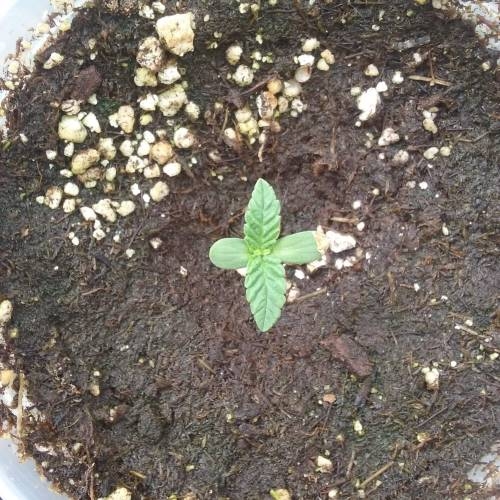 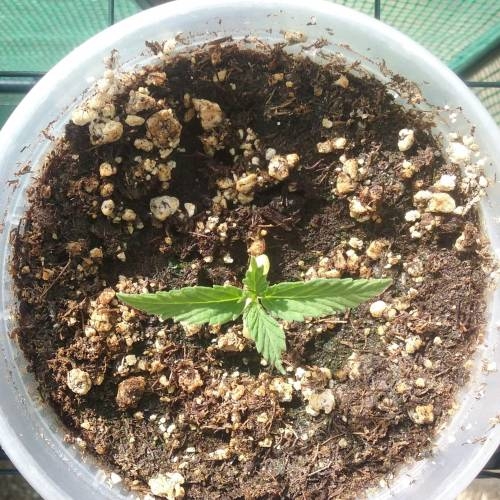 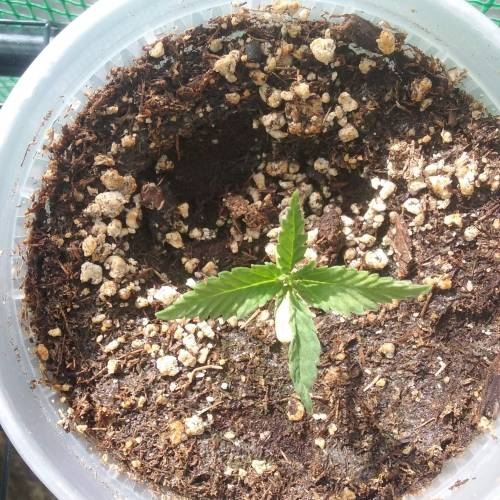 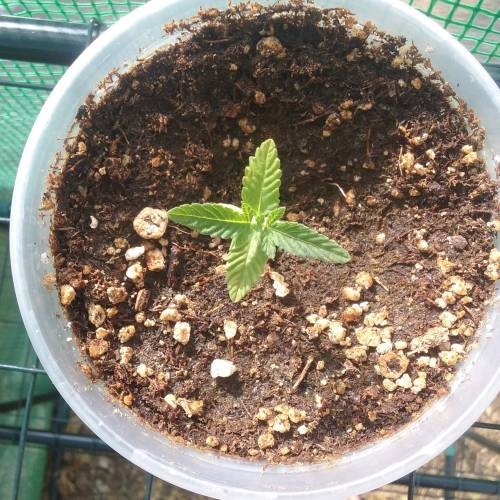 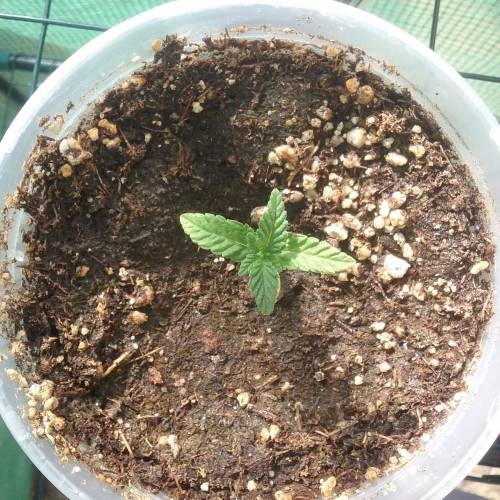 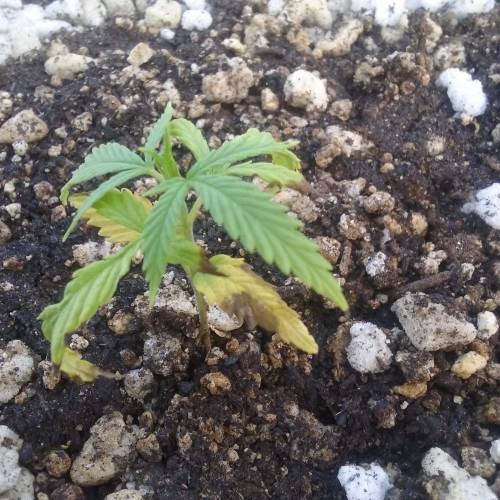 CBD MH 1
Not sure what caused the yellowing of the leaves. They ended up dying so I cut them off. 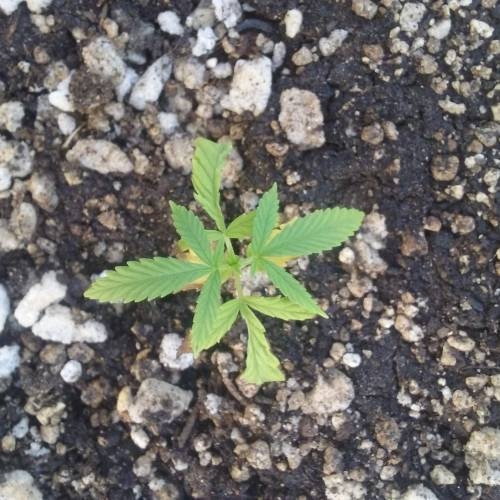 CBD MH 2
The lower leaves are dying and pointing down. I was told this is due to over watering. I only watered when the container was super light but I was heavy handed with it.

Contiuation of week three with GG4 and I will add my photos that I have posted on here in a couple threads for consolidation/simplicity. 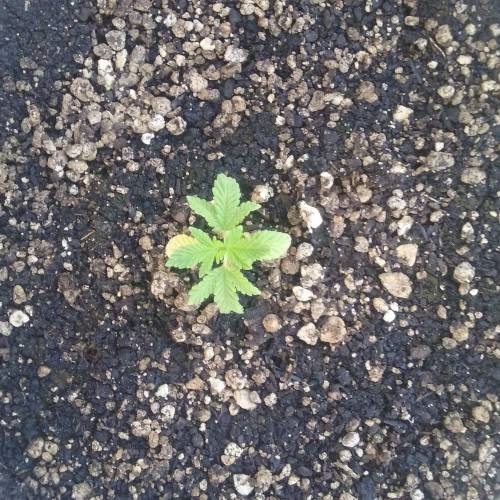 GG4 1
Yellowing leaves and all are curled pointing down. 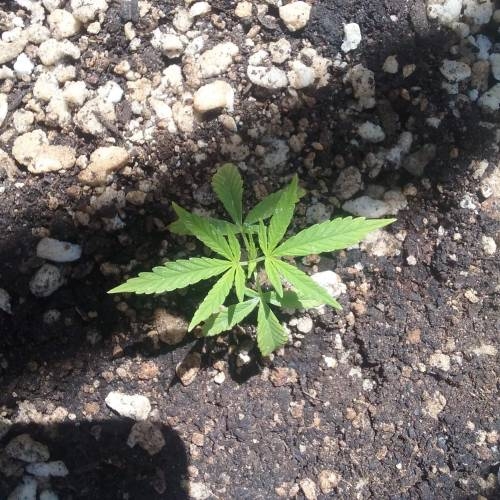 CBD MH 1
Node two or three Idr is curled and pointing down. 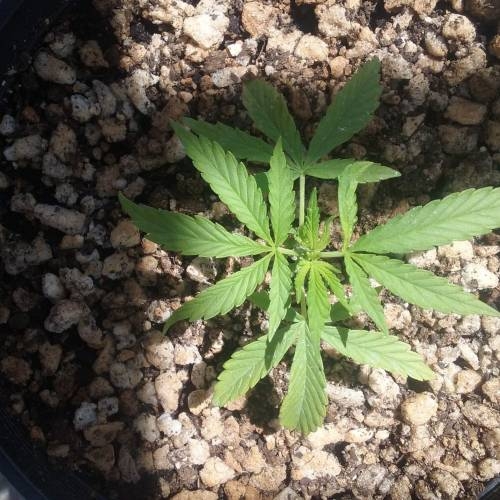 CBD MH 2
Node two or three is curled and pointing down. Tips are brown, this eventually spread throughout the leaf and started working it's way up.

I transplanted one plant about four days before I transplanted the other. I am pretty sure it was this one. Whatever was causing the leaves to die slowed down but still took another node or two. It has more or less stopped at this point but it is still happening. 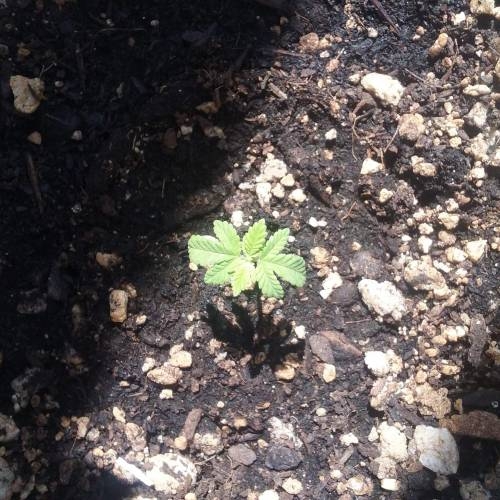 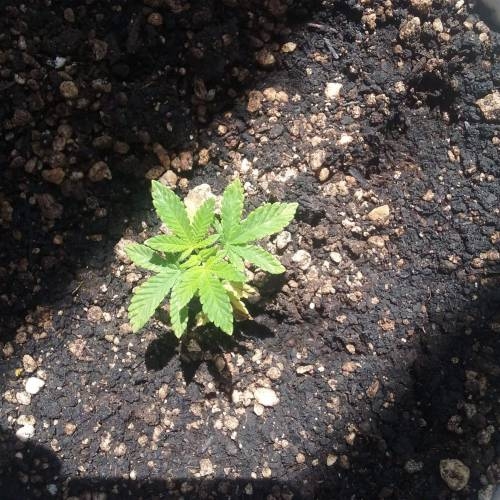 I stopped being so active about posting because they were growing slow af and not much changes in veg so the next pictures are weeks seven and eight gve or take, as I said I stopped counting. 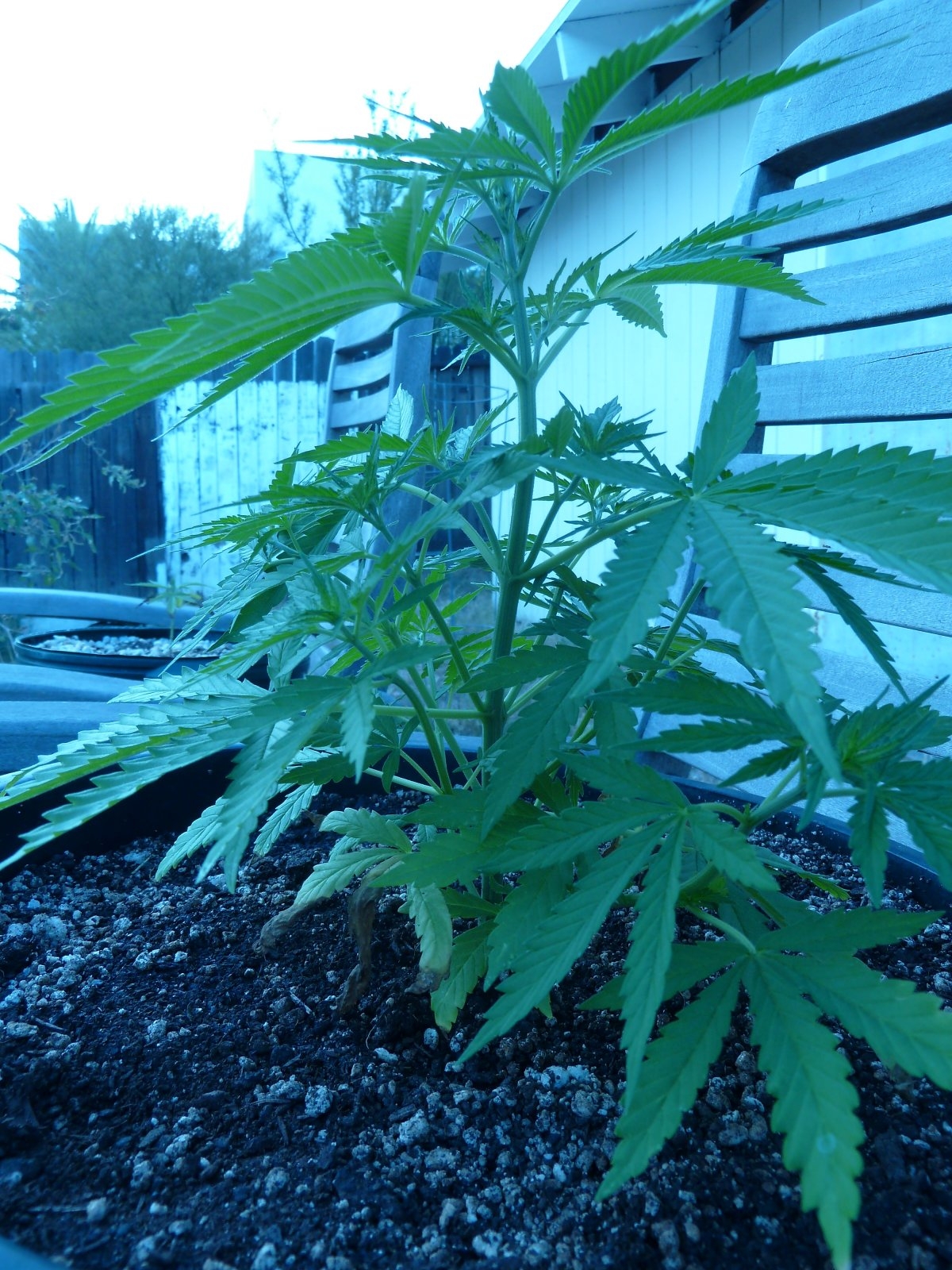 CBD MH from August second. As you see those bottom leaves... I have sense removed them. 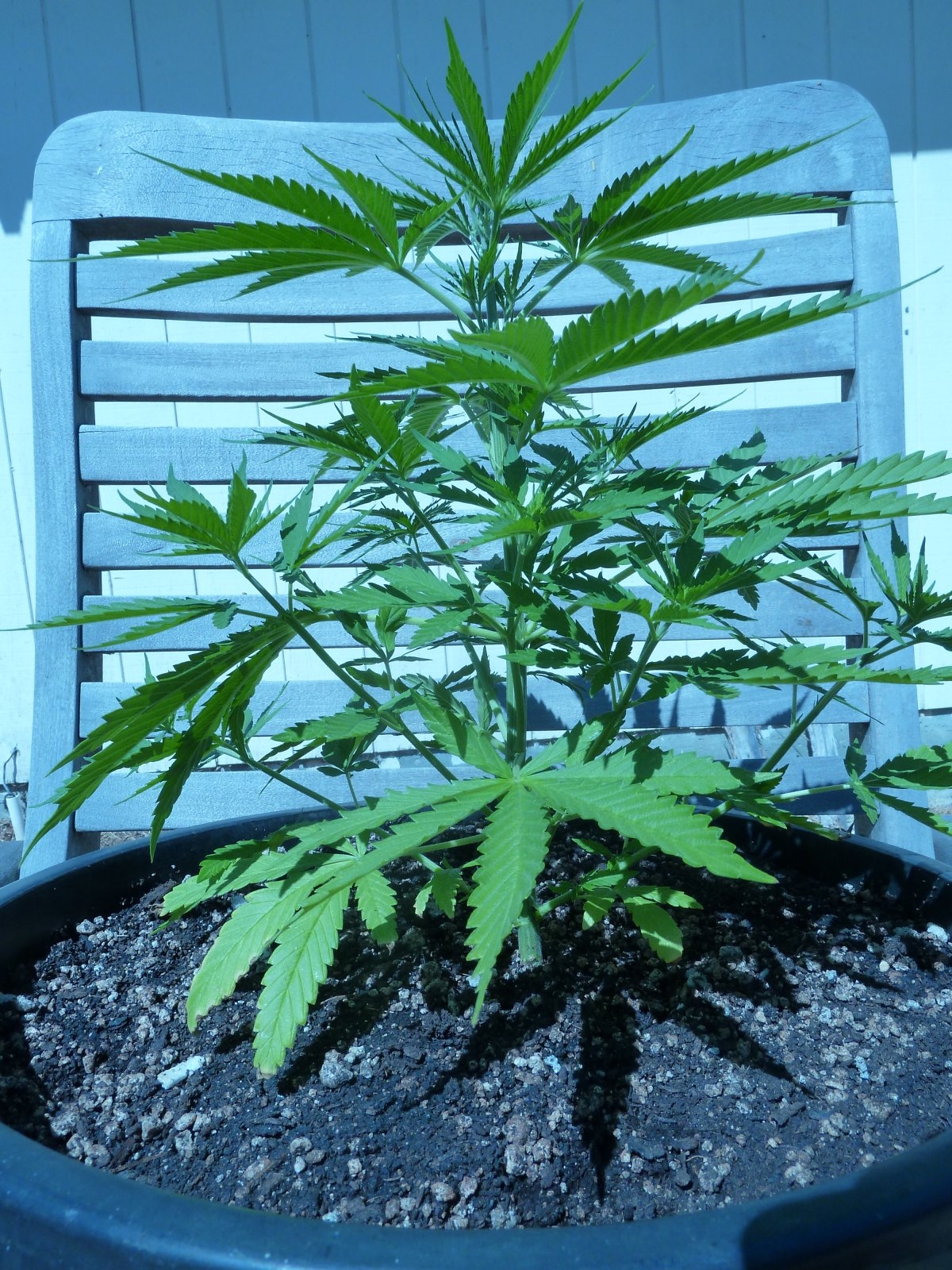 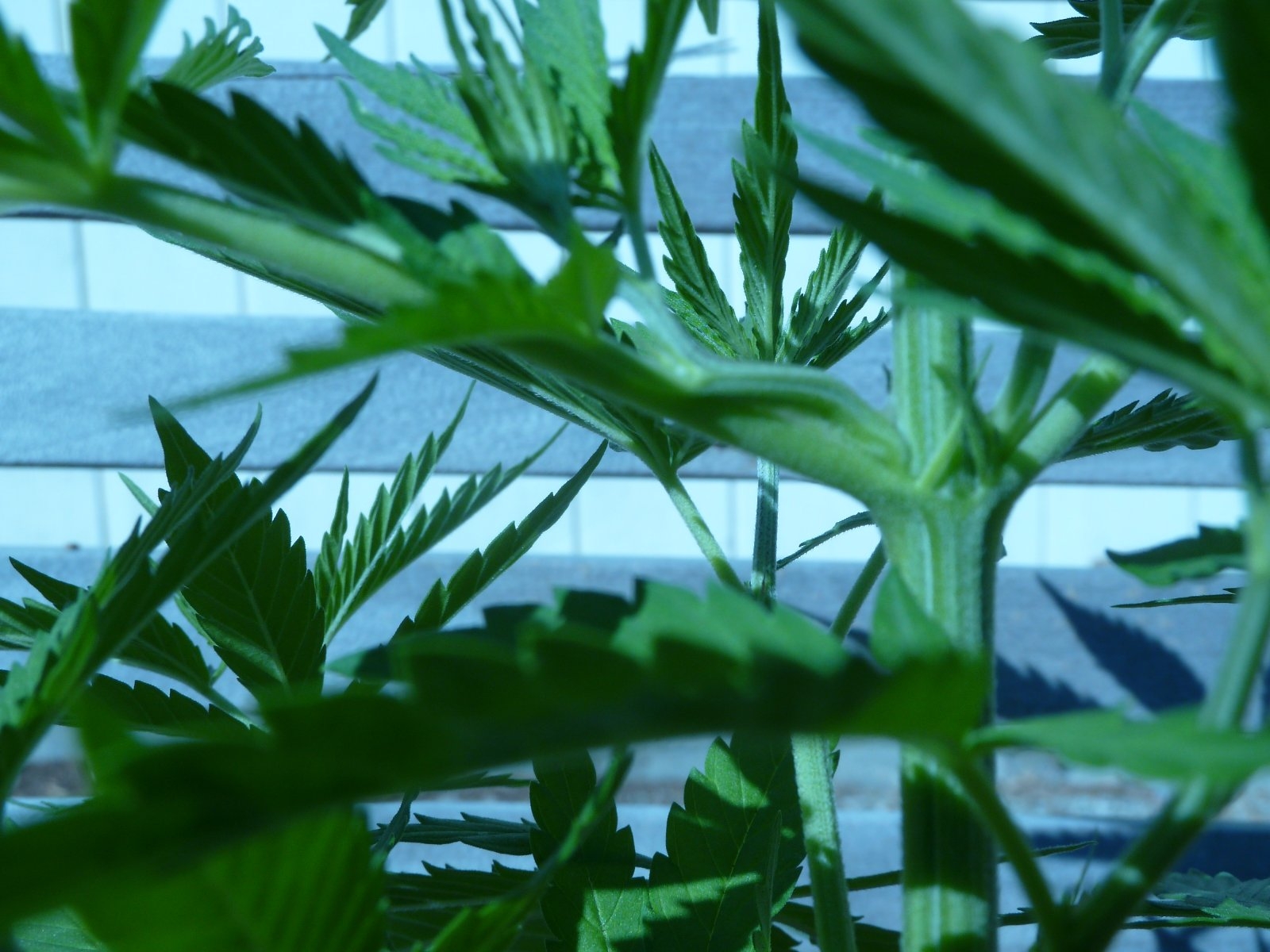 A little deformation that has sense broken the build up of cells that weren't letting it grow as diagonal growth. I have some deformed leaves too. 4,6 and 8 fingers vs 5, 7 and 9. Being as the plant as a whole is healthy I am not to worried about them. 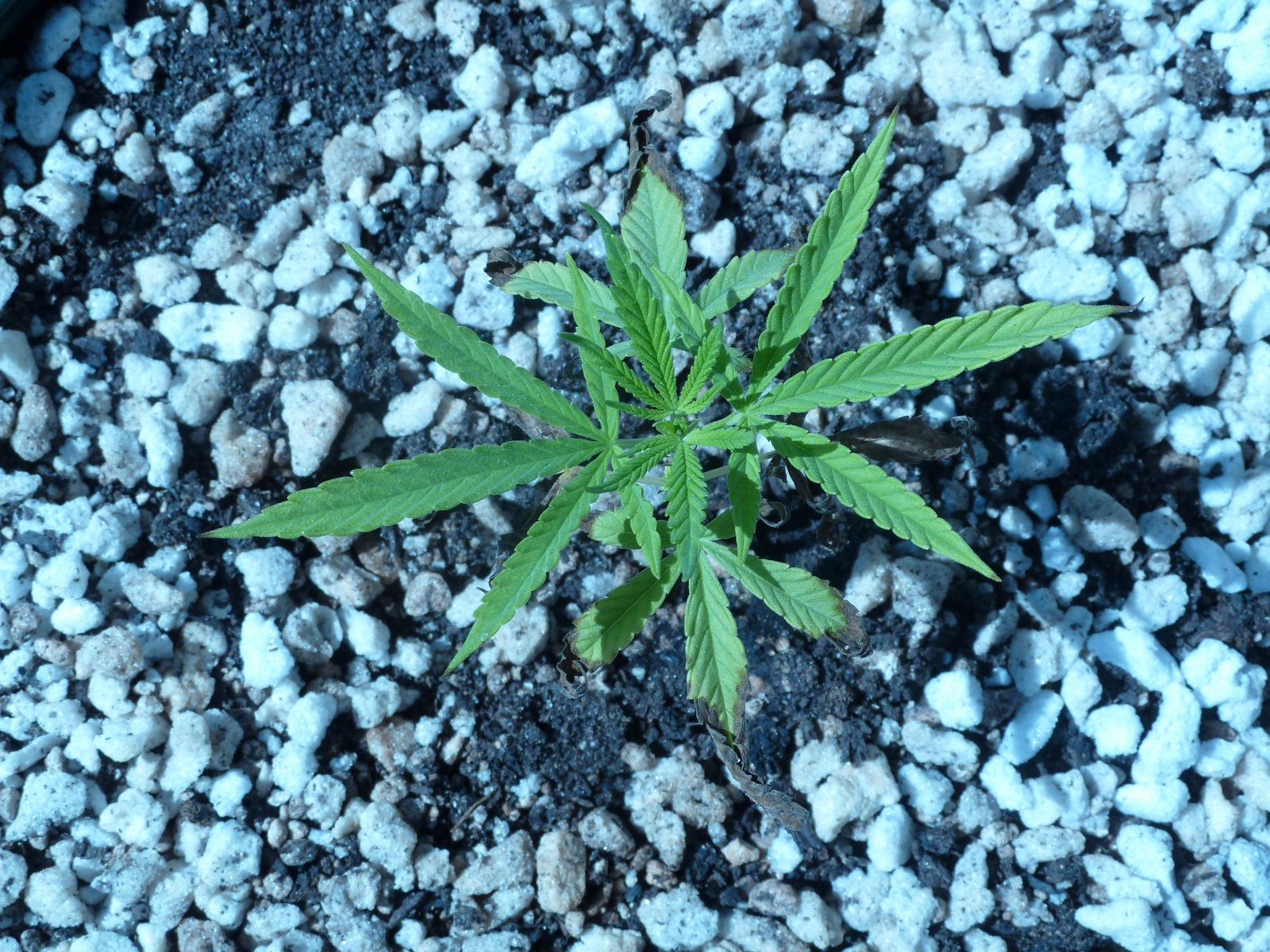 CBD MH 2 - top view
This is the cbd mango haze that is growing slow af but the stem has thickened, it's taller and the nodes are starting to grow.

This next picture is a side view of the second cbd mango haze. 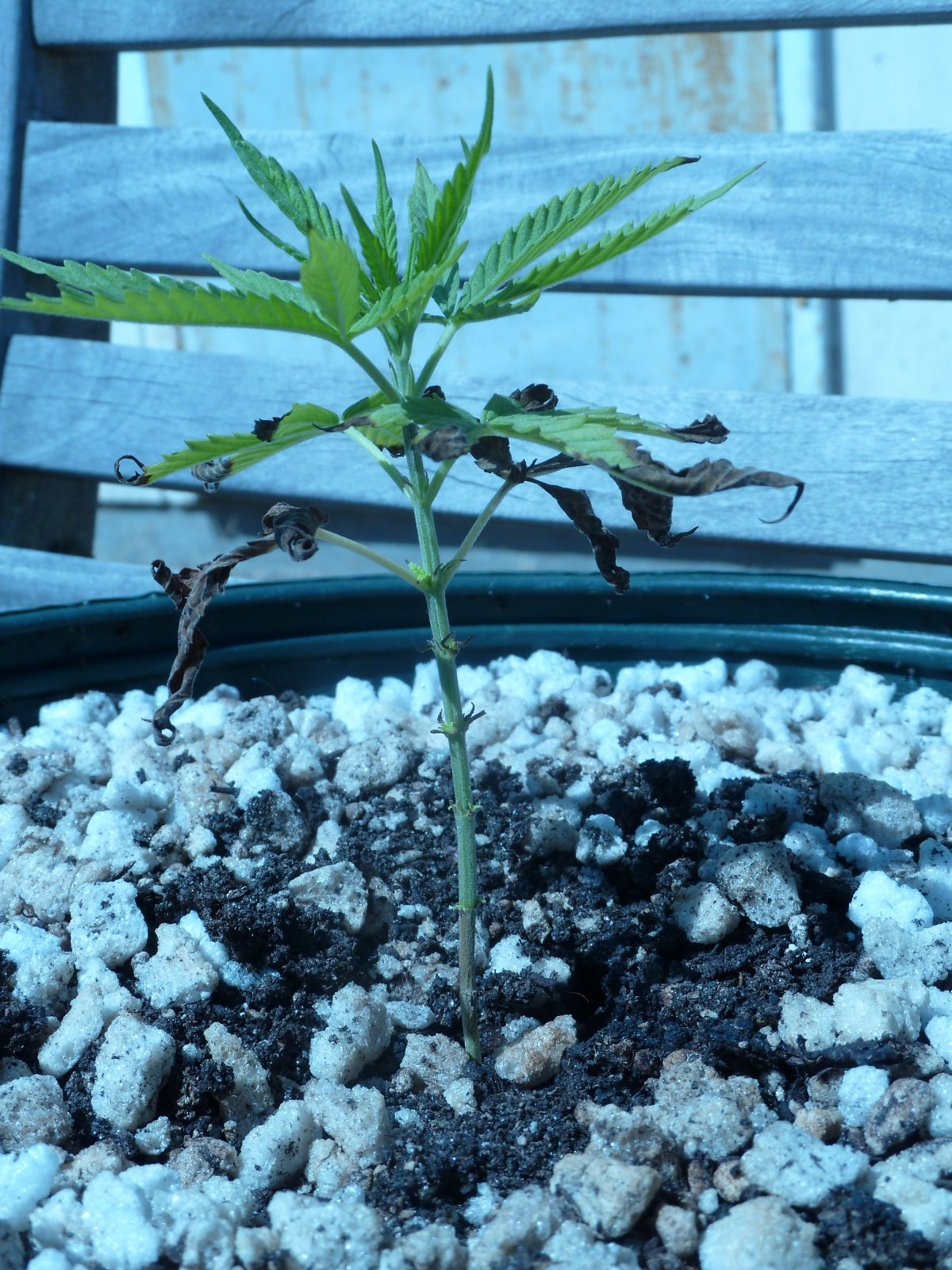 CBD MH - side view
As you can see the leaves on node four or five(I can't tell in the picture if the very bottom is the sun leaves or the first set of true leaves, I am thinking sun leaves so I am calling it node four) are dead and it is going to node five. I plan on transplanting this as soon as I figure out the best way because I want to remove the dead leaves and bury it at leasst up to the first set of dead ones if not the second for support and root purposes.

I am not sure what is causing this but I am thinking in this pot it may be to much peralite thus not enough water. When I transplant I am not adding peralite. 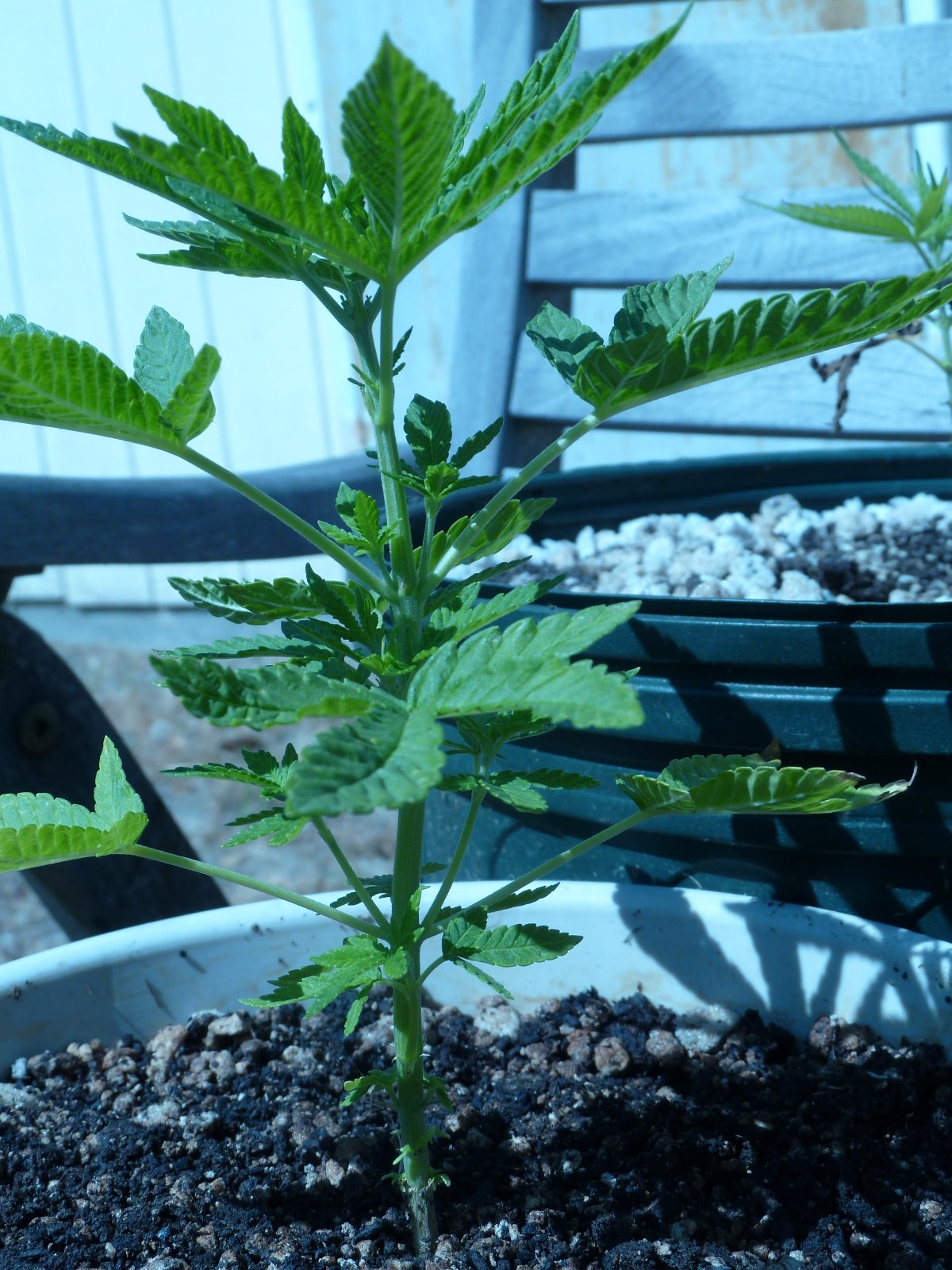 GG4
The survivng GG4. It is growing slow but it is clearly growing now. Not as tall or bushy as I would like but I am glad it has started to do something. I lost two or three nodes on this due to them having the same issue as the others and you can kind of see the residual on the first set of fan leaves. 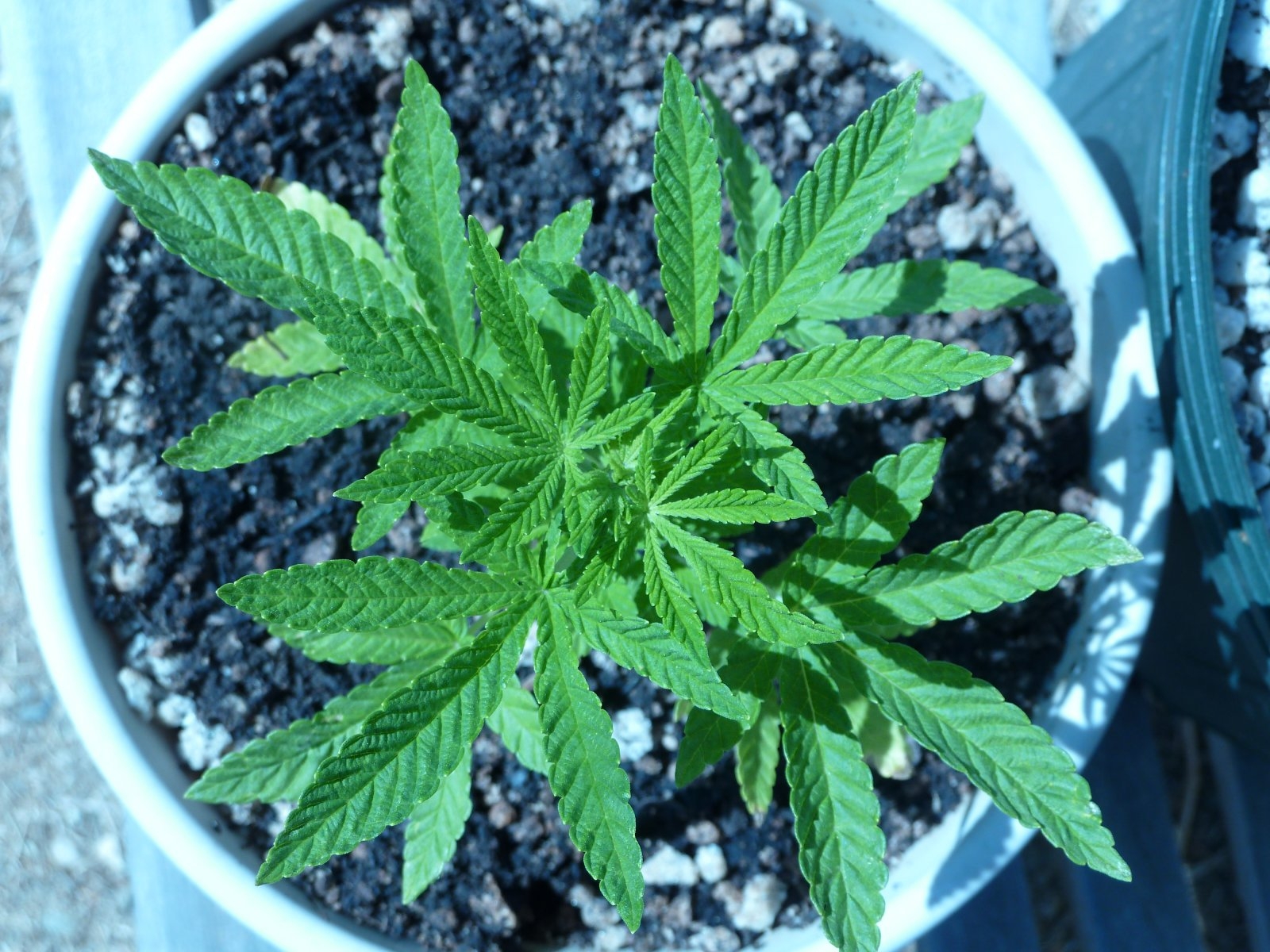 So these are the pictures I have right now. I probably won't be to active through out veg unless I have a question about something that I feel needs to be seen. So until flower...
Journal time!
Cr8grow’s Soil Girl Scout Cookies Grow Journal, 2019
The Proper Way To Water A Potted Plant
The Bonsai Sultan Method: Typological Breeding In Little Space
Plant Abuse Chart
Cannabis Plant and Pest Problem Solver: Pictorial
Grandpa Likes To Squeeze Stuff: Solventless Extracts, Rosin, Pressed Here!
Dutchman’s Pheno Hunt!
Dutchman’s Eternal Frost Factory
The Quadsquad Thread, A Community For Quadlining
E

Pennywise said:
You made a good choice coming over here.
Click to expand...

Yeah I remember you saying that so it gave me encouragement not to be to down about it. These were really lets just throw some seeds in dirt and see what happens but even w/o much of an expectation when they look bad it affects the mind set about the whole thing.

Back on one of your threads I mentioned some culitivars that may have the narcotic effect. Monster Pebbles is another. It's Grandaddy Purple x Critical x Somango.It looks like the breeder may have just taken Critical Mass and bred to a bunch of strains for yeild purposes. GDP and Somango seem like worthy indicas though.
Journal time!
Cr8grow’s Soil Girl Scout Cookies Grow Journal, 2019
The Proper Way To Water A Potted Plant
The Bonsai Sultan Method: Typological Breeding In Little Space
Plant Abuse Chart
Cannabis Plant and Pest Problem Solver: Pictorial
Grandpa Likes To Squeeze Stuff: Solventless Extracts, Rosin, Pressed Here!
Dutchman’s Pheno Hunt!
Dutchman’s Eternal Frost Factory
The Quadsquad Thread, A Community For Quadlining
E

Is there an @mod that will get their attention or how do I do it?
Journal time!
Cr8grow’s Soil Girl Scout Cookies Grow Journal, 2019
The Proper Way To Water A Potted Plant
The Bonsai Sultan Method: Typological Breeding In Little Space
Plant Abuse Chart
Cannabis Plant and Pest Problem Solver: Pictorial
Grandpa Likes To Squeeze Stuff: Solventless Extracts, Rosin, Pressed Here!
Dutchman’s Pheno Hunt!
Dutchman’s Eternal Frost Factory
The Quadsquad Thread, A Community For Quadlining

Enjoying said:
Is there an @mod that will get their attention or how do I do it?
Click to expand...

I see it was taken care of

I'll have to go back threw and read it

420 Staff
This has been moved to Journals in Progress.

My thoughts for when I run things in a tent are start in one gallon pots and when I am about to flip to flower transplant to five gallon pots.

I would like to quadline and LST, these seem to go hand in hand(though you can LST with out topping). My thoughts to achieve this are get the plant completly quadlined in the one gallon(not having to tie things down anymore)so I can just transplant into the five and flip. This would mean the plants play well with me and eachother so timing works out though if I have a straggler I would probably just flip depending on just how far behind it is and give it extra attention.

I am writing this for anyone who has thoughts or experience doinng something along these lines. Either one works for me as thoughts can lead to more ideas and help figure things out, and experience is helpful because it's been done and guidance can be given.

I've never quadlined. But my system is similar to yours, I veg in #1's then up pot at flip. Usually #3's or #5's. Been doing it for awhile. My veg tent is small. So that system is perfect for me