Welcome to my 7th journal on 420mag! We are starting out at the beginning of flower period as they were veg'ed in a closet under 230 watts of HOT5's.

This is going to be a high quality meds grow of a multi-cup winner, Kosher Kush. I grew this a while back and with awesome results for quality. There should be no qualms in anyone if you're thinking about this strain.

She's mainly indica, but has some decent stretch.

Originally I was going to try main-lining these girls but I dropped the seeds to late. As a result they've been topped only once. And because I started them late they also didnt get any real defoliation in veg to speak of. I would have hit them hard after two more toppings had I gone the main-lining route. I've already germinated some Holy Grail Kush for next grow so maybe those will get that routine.

These girls have been fed Blue Planet Nutrients two part, with BPN Vita Blue, and Liquid Seaweed during veg, along with Hygrozyme, Cal-mag, and Fox Farms BushDoctor microbe brew.

Now in transition, they are being fed all of above plus BPN Liquid Blue. In 2-3 days I'll take them off transition, change the res and eliminate the BushDoctor from the routine. But for the most part I feed at basically 100% of BPN schedule.

These gals are under 14hrs on, 10hrs off, light schedule right from the start. They were vegged using GLR and in 5 days they are already showing pistils and transitioning right into flower very fast. Stretch is already going fast & hard. I've already super cropped these gals some. Eventually they will get only 9hrs lights on. Probably around week 5 of flower.

They are not as bushy as previous, because of the main-line topping and not getting to defoliation, I'm sure. But bending will help.

A 4" exhaust fan pulls air out through a carbon filter to help move air and keep the smell clean from neighbors.

I'll try to do updates at least twice a week. But I've been pretty busy lately too. 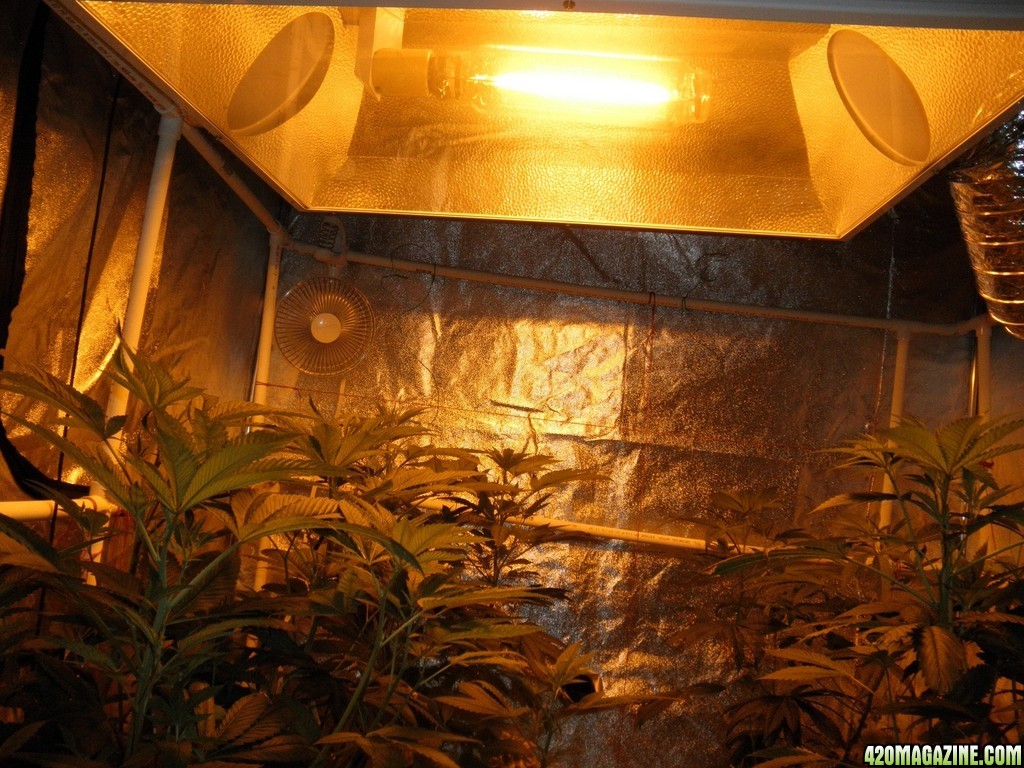 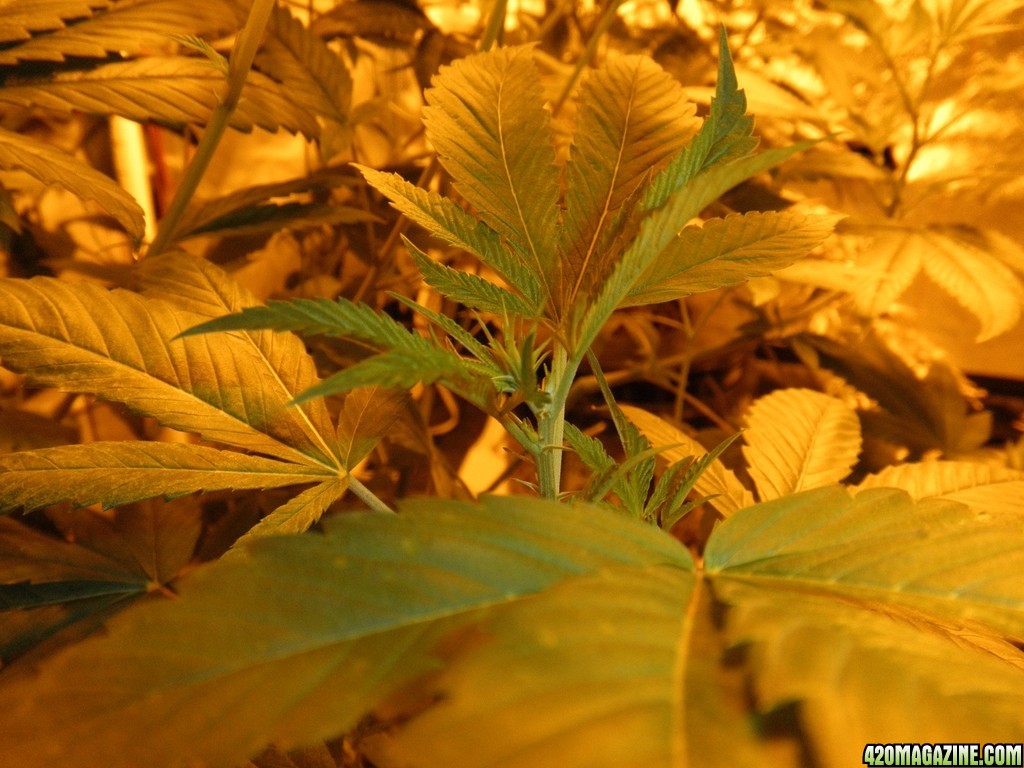 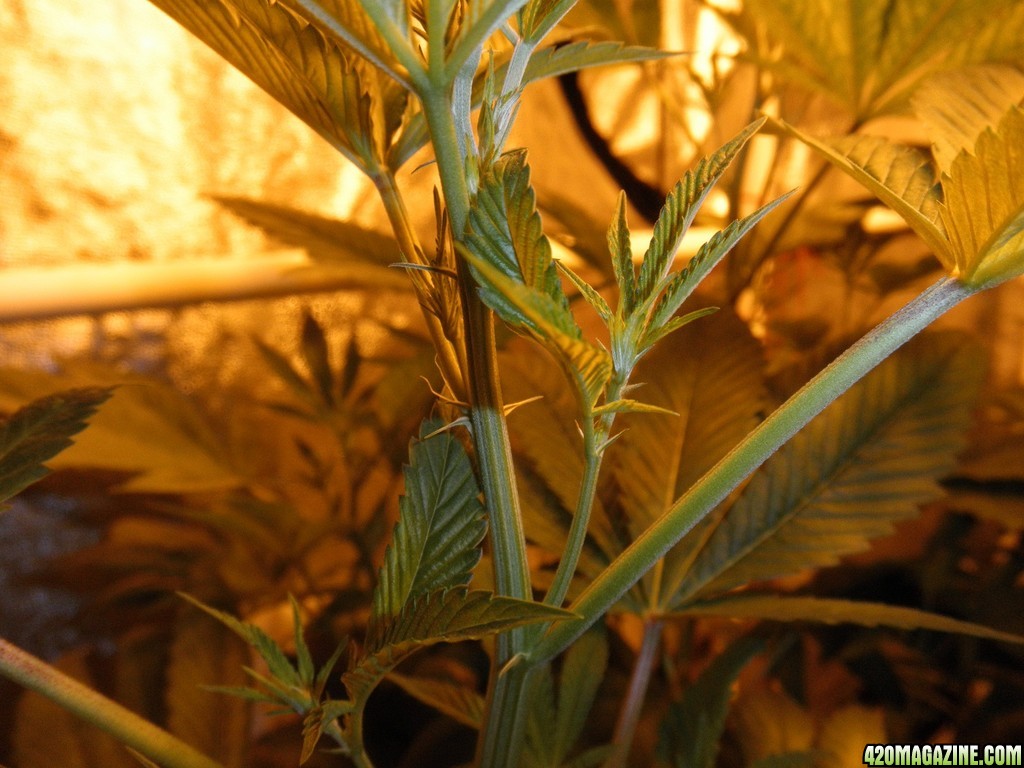 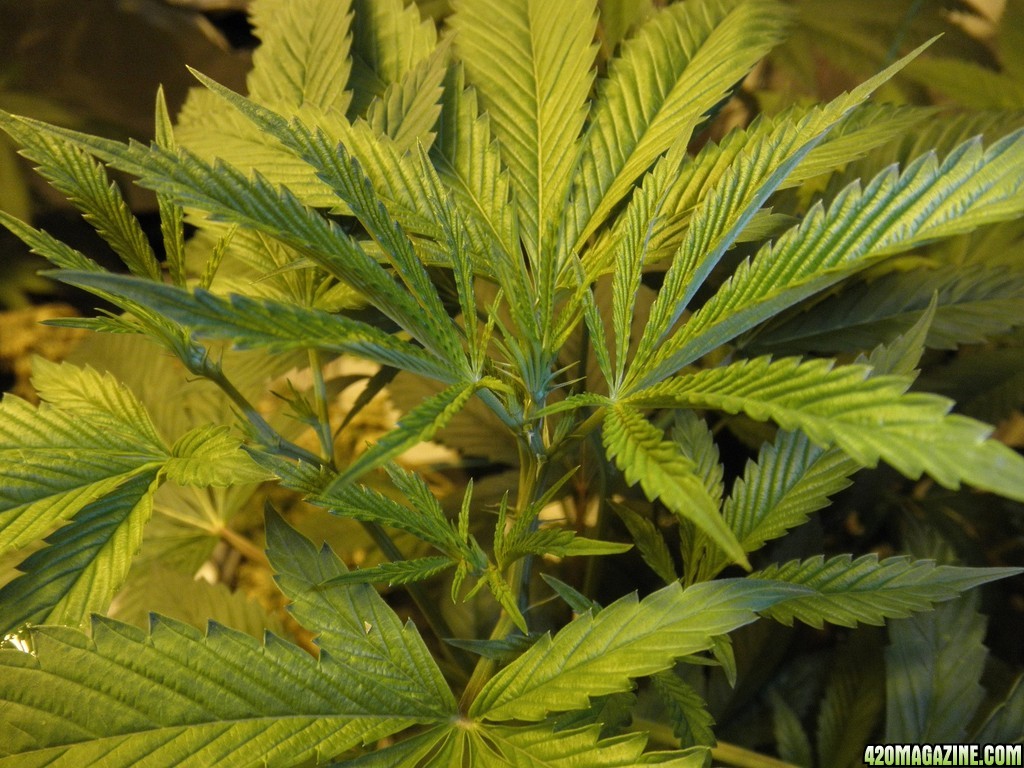 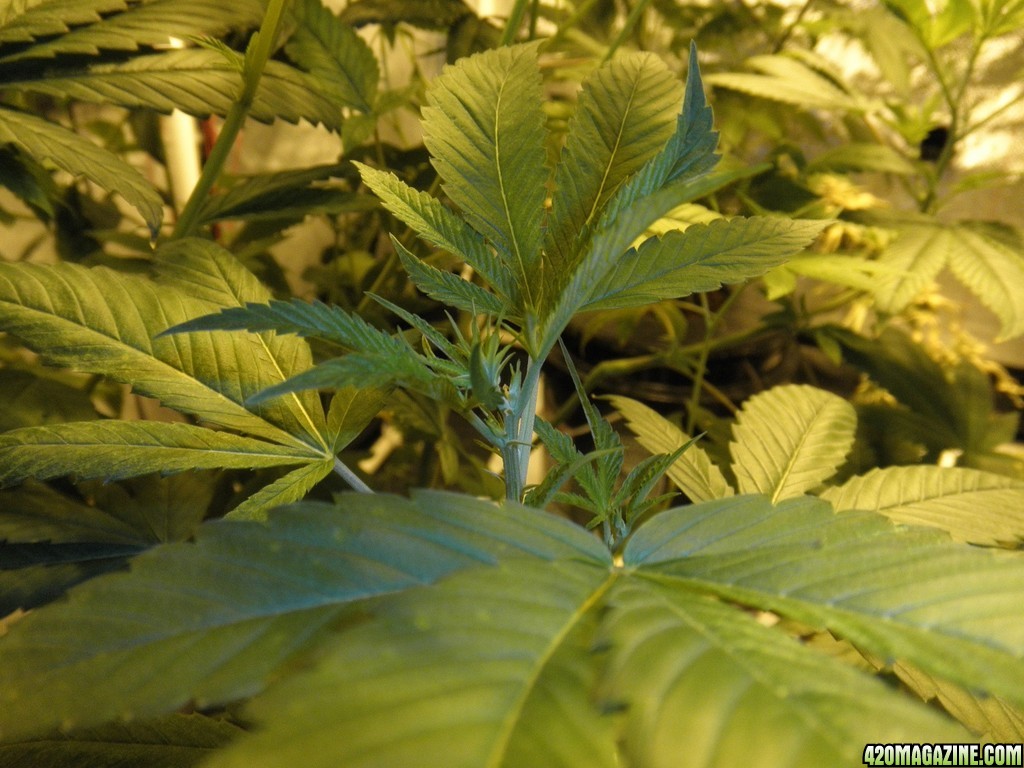 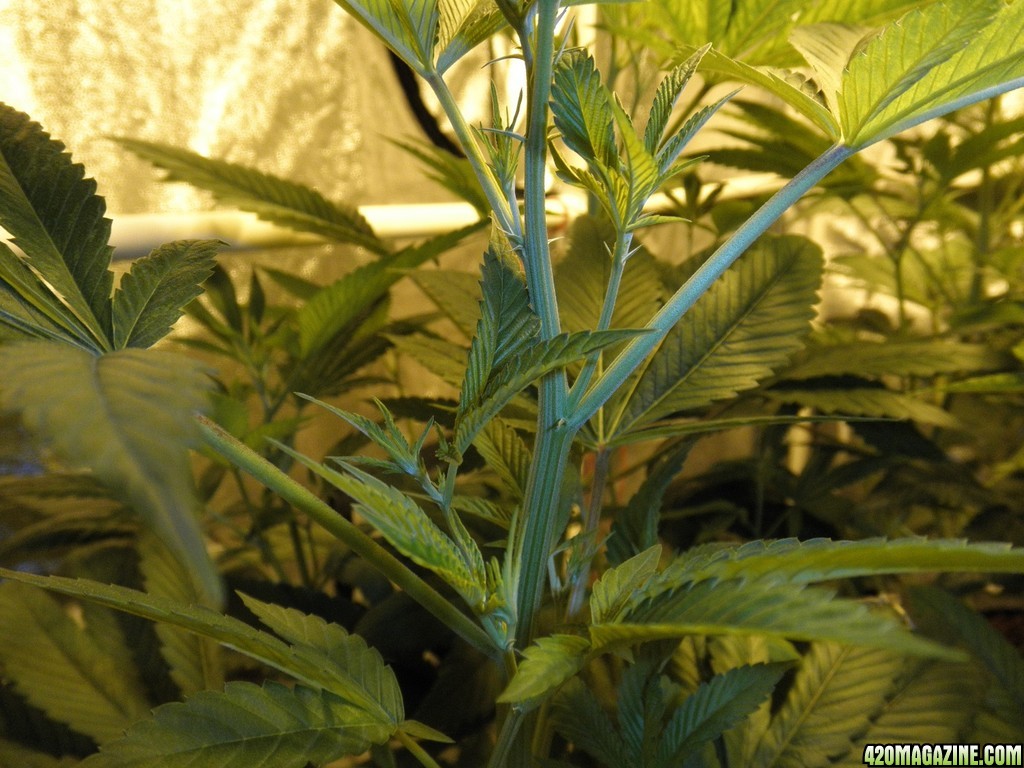 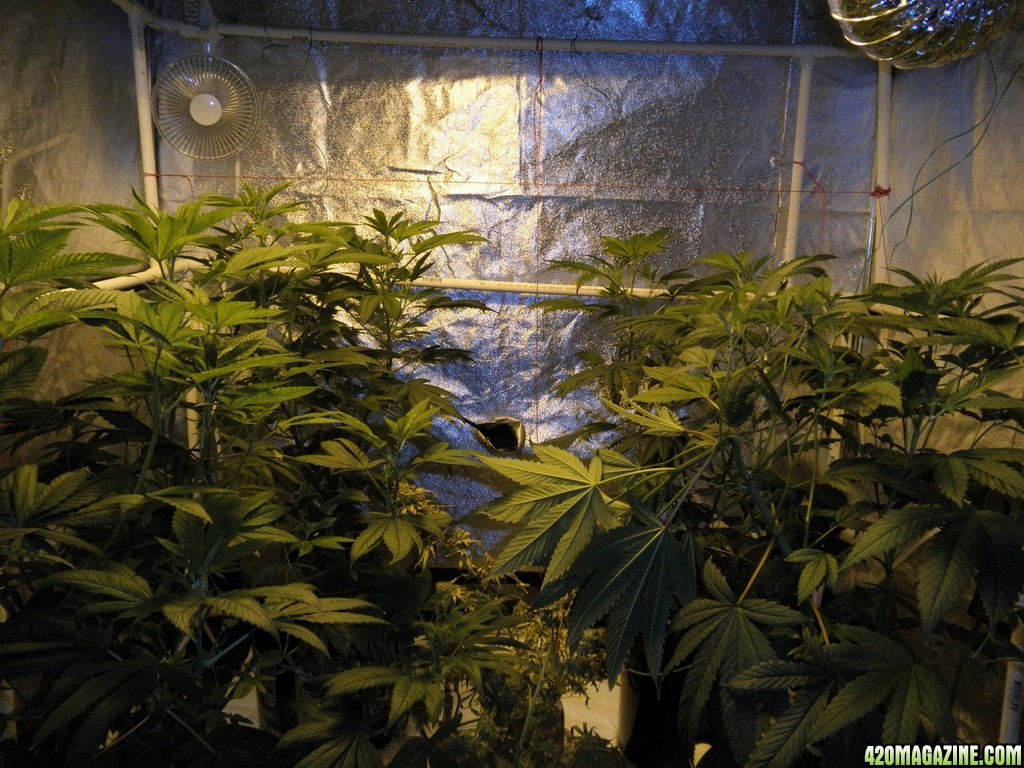 A super crop from today: 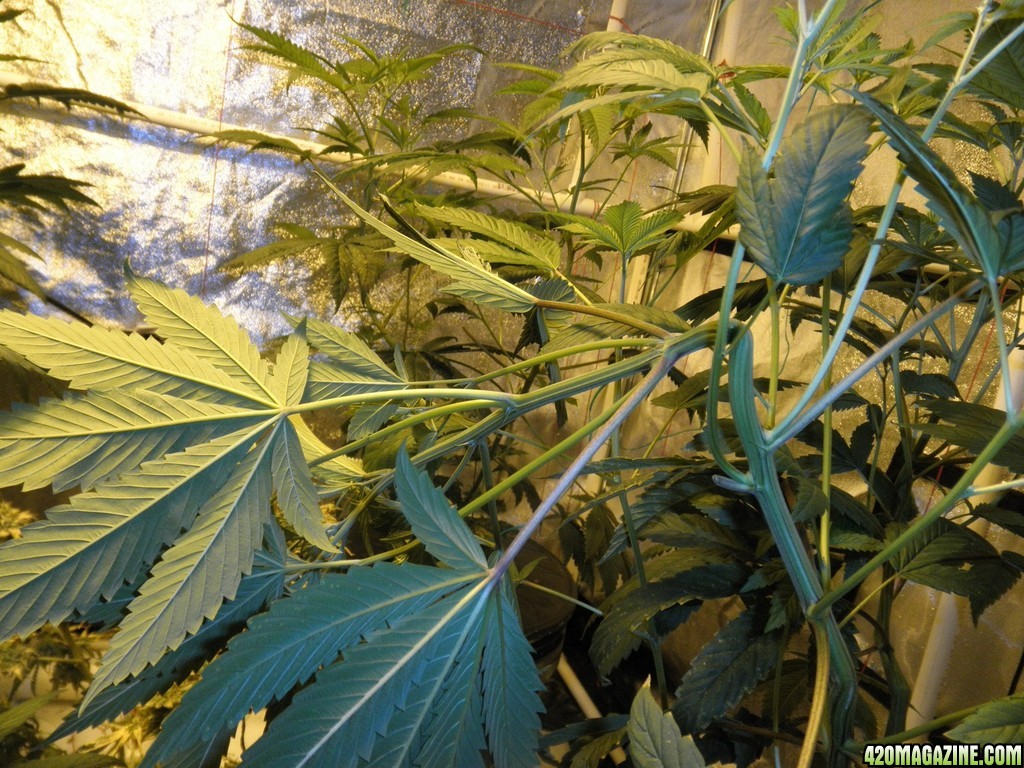 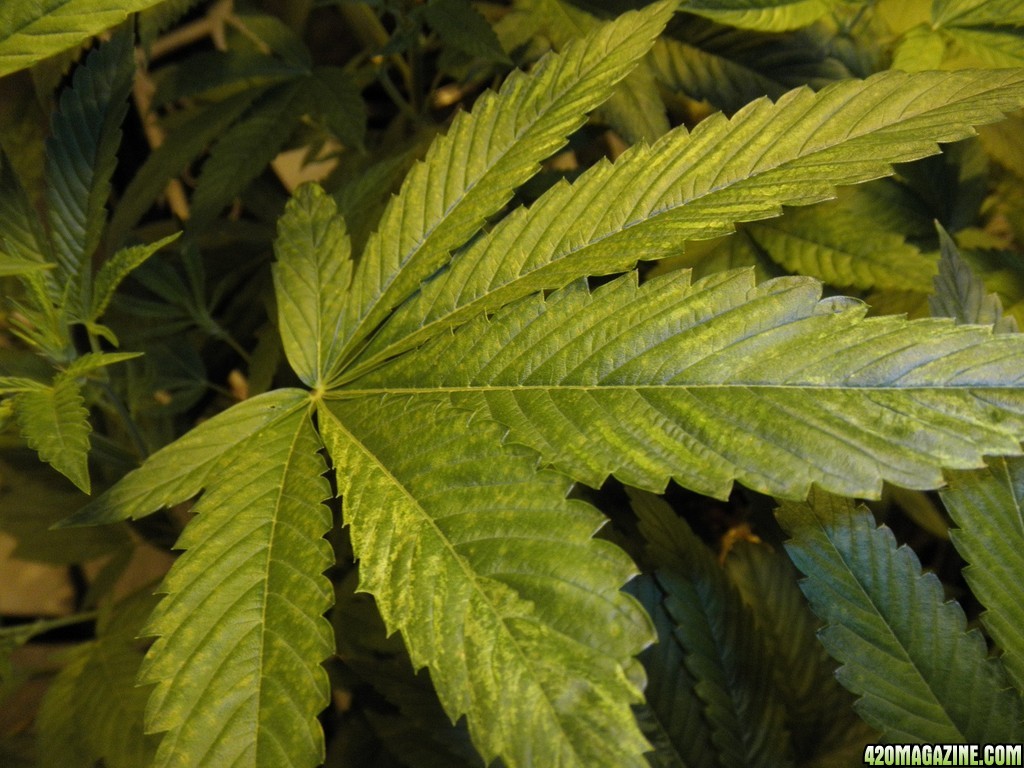 OK I think I can get a front row seat, if you don`t mind. Sticking around anyway, as long as I can get a chair. I think it`s time to medicate.
Peace & Great Growin`
YR
Yooper Rex

subbed. glad to be here from the start of your grow. plants look good as usual.
B

HighTimez said:
subbed. glad to be here from the start of your grow. plants look good as usual.
Click to expand...

Awesome start.
Check out my first ever journal. Always open to advice!
1000w Hydro Perpetual
Also have a "in progress" build thread... check it out.
Northerner hydro table build Dec.2012
"Death and darkness are rushing forward to take a bite of the wall" RIP Ronnie James!

really i made front row im in and im subbed
To be old and wise you must first be young and stupid so smoke it up
"unknown"
Check out my first ever grow journal:
Chubbz's DWC OG Kush 3000 Watt Monster Grow Diary
A

Looking good there - and very much reminds me of my Kosher Kush girls a couple weeks back!!

Subbed and cant wait to see these girls turn into beasts

Thanks for joinin in guys! I didnt even look at them today other than a peek at lights on and saw the super crop had already turned 90 degrees upwards. Busy day. Res change today or tomorrow for 2nd phase of flowering mix and off transition phase.

Bassman59 said:
Thanks for joinin in guys! I didnt even look at them today other than a peek at lights on and saw the super crop had already turned 90 degrees upwards. Busy day. Res change today or tomorrow for 2nd phase of flowering mix and off transition phase.

I can imagine just how bad the stretch is

Had to raise lights 3 times - then finally found time to defol and bent a couple of the tall branches down again! Im glad to say that after the heavy defol they are still as perky as ever and looking they love the extra light that is now bathing the entire grow room once again!
My Current Grow Journal -Resereva Privada; Kosher Kush Homebuilt RDWC
First Solo Grow - DWC Kosher Kush

Haha that sucks.
Check out my first ever journal. Always open to advice!
1000w Hydro Perpetual
Also have a "in progress" build thread... check it out.
Northerner hydro table build Dec.2012
"Death and darkness are rushing forward to take a bite of the wall" RIP Ronnie James!
B

Res changed from transition nutrients to bloom phase yesterday. Used BPN 2 part, with Liquid Blue, Vita Blue, Liquid Seaweed from BPN and Hygrozyme and 2.5ml/g of cal-mag. I've found that with 0ppm RO water a 1/2 dose of cal-mag is about right.

My res change isnt 100%. I pump all that will pump, this leaves about 2" of water in the buckets, and some in the pipes and chiller. I then literally soak up from the epicenter with a towel. My guess is it leaves about 4 gals or so in the system. I add back 15 gals to the epicenter and all the buckets are at perfect levels.

PH is around 6.2 this morning so I dropped it a tiny bit.

I am thinking about swapping positions on the plants. The back right plant is a skinny, lanky lil bastard and none of them are the normal bushes I grow because I started so late from seed and was going to main-line them and defoliate, but only topped them once and no defoliation in veg with the slow down. I really needed to get these girls into flower.

These gals will definitely not be the bushes I normally grow. But the quality should be great and the yield decent.

The lone clone I took from these is doing awesome and will be a great plant. I'm undecided right now because she is in the veg closet with three Holy Grail Kush from seed. I stared 4 HGK's, but only 3 took and my grows are normally 4 plants.I think if I took a clone from the KK now it wouldnt catch up to the HGK, and if I let her grow out with the HGK she'll out grow them. But I may top her, take a clone, and turn that clone into a mom instead.

I still have a brand new chiller, a 4x4 tent, and all the pumps, pvc, uniseals, buckets to get that next batch into flower before these are due for harvest. But truth be told I think I am still off on the timing I wanted. I also have to set up a different space for moms only. This would give me a small area for 3 mom's and her clones till transplant to buckets. Then a veg closet, until a tent is open to transfer into. But I don't think I can get the timing right without another veg space as the veg closet now only holds 4 buckets.

So with this Kosher Kush grow things look fine. I've taken less than 10 big ass fan leafs out only because they were so big and hiding new flowering nodes. I don't like to really take leaves during stretch. But in about 12 days or so I'll be hitting them hard.

Here's some pics from today: 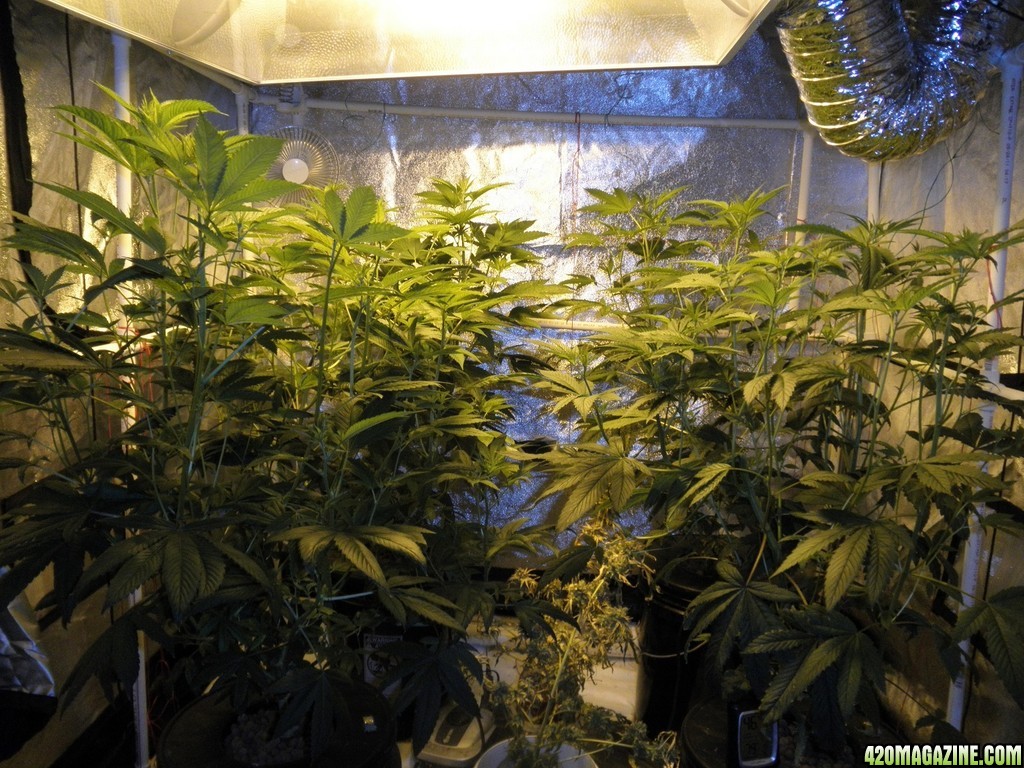 Pay no mind to the lower middle. Just 2 x 2L hempys about to get chopped. 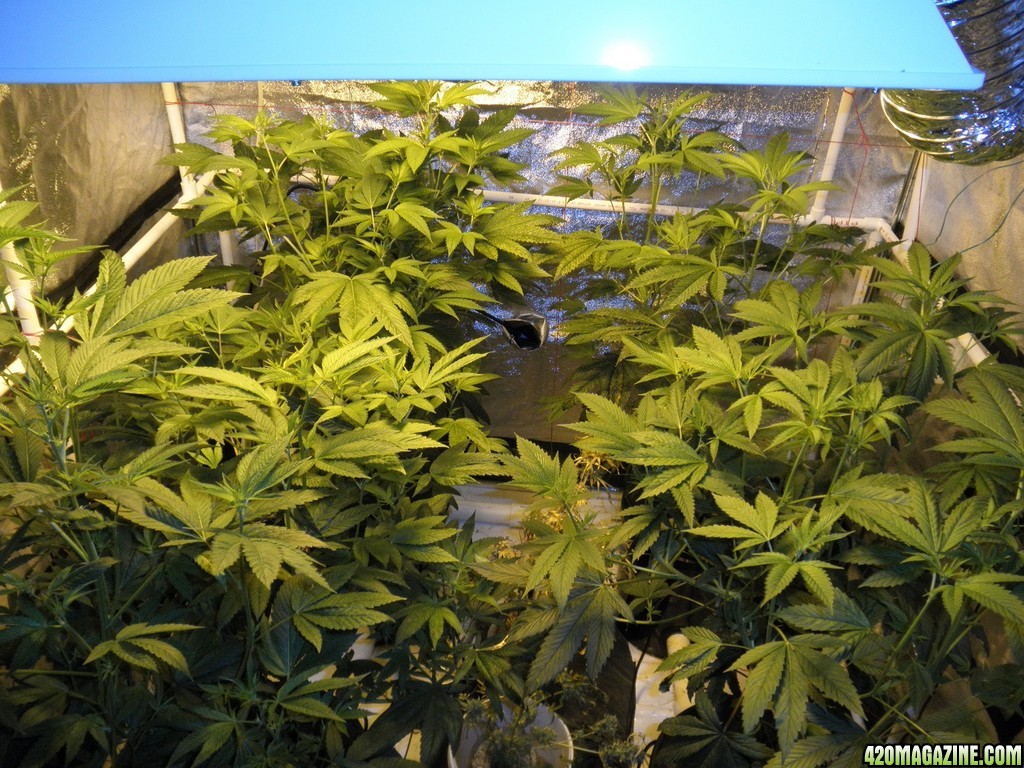 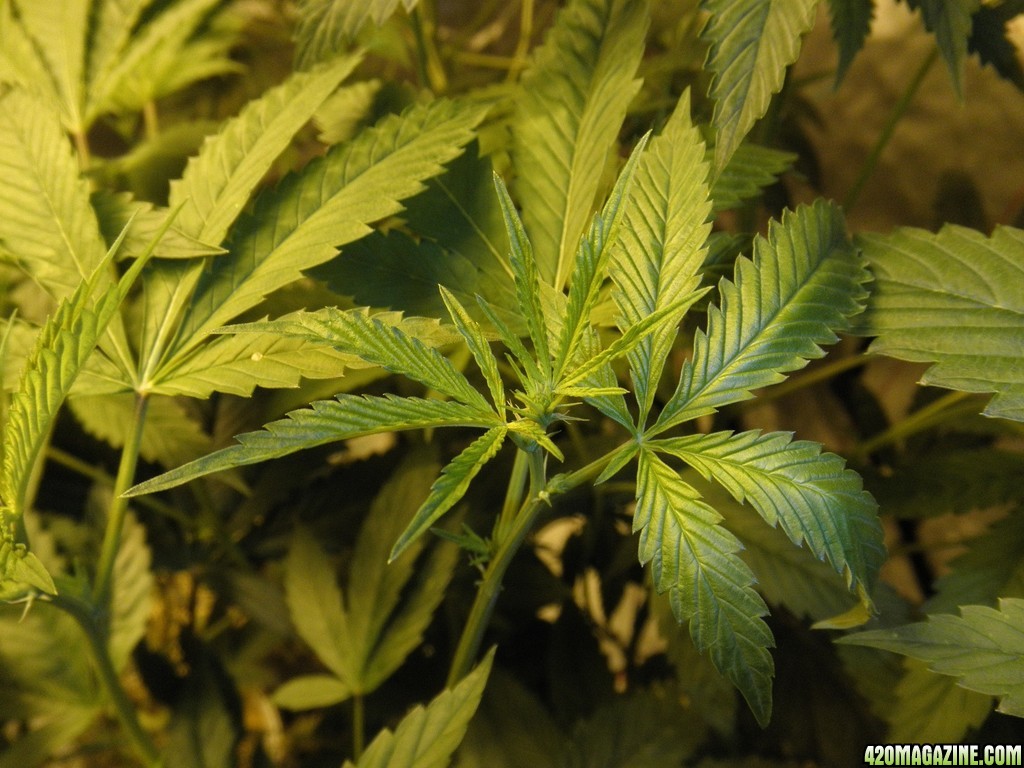 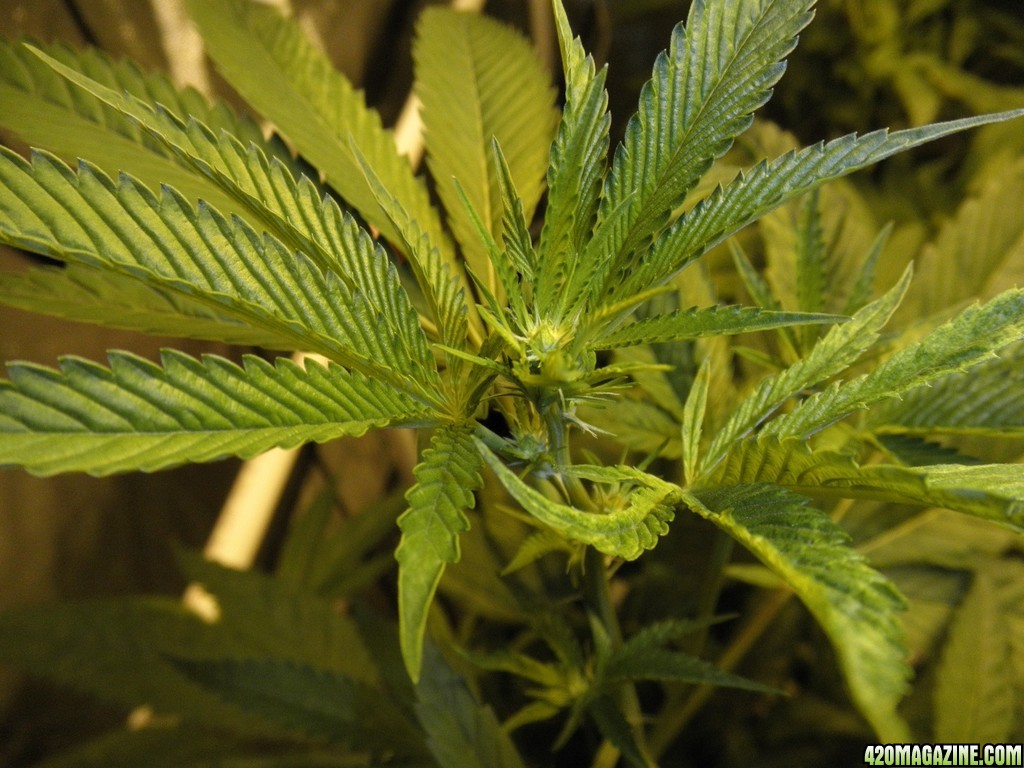 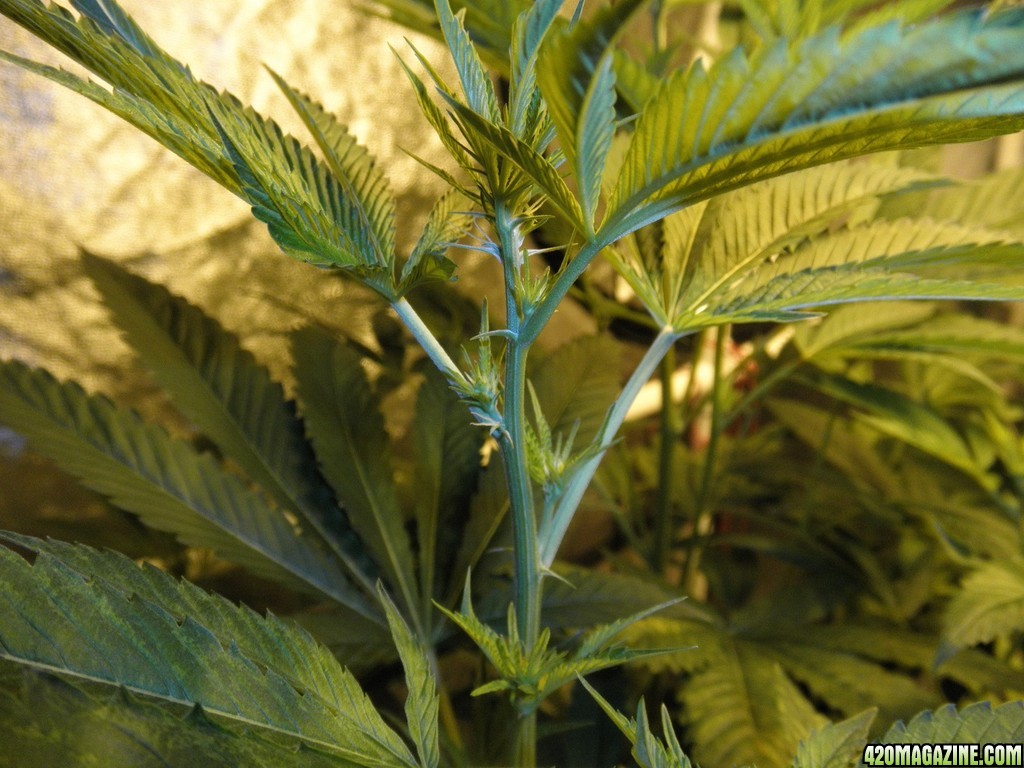 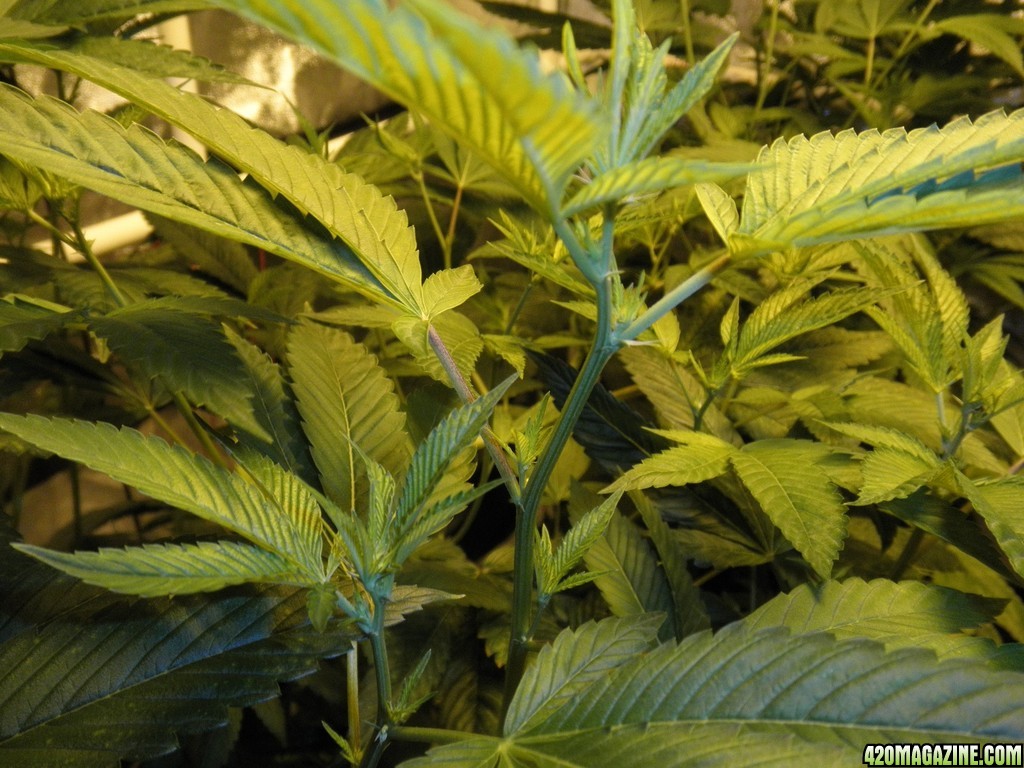 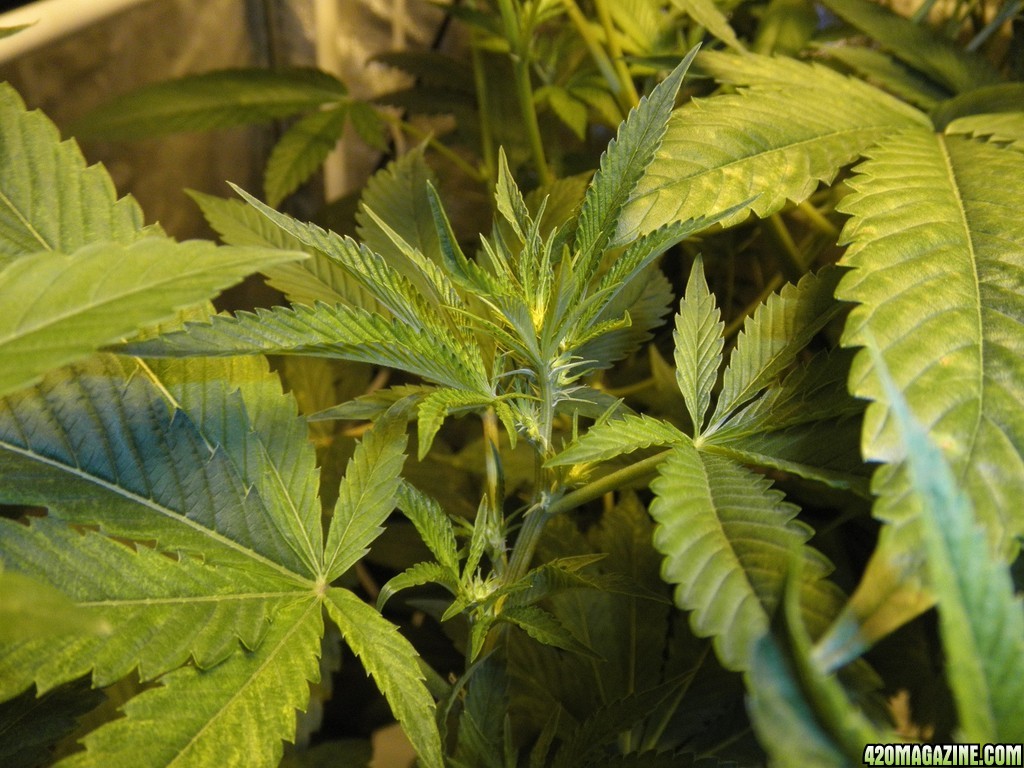 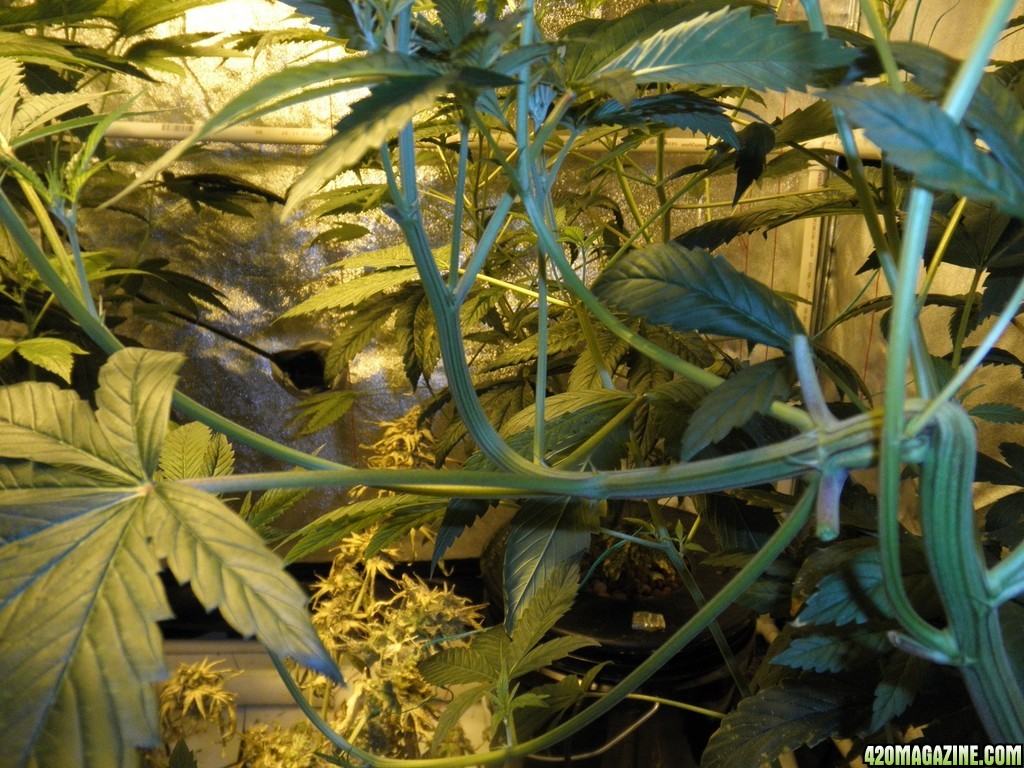