Heya folks! This is my 6th grow. Going for another Hi Yield with hopes of beating last grows' 28oz dry, yield.

Strains are two Martian Kush in back of tent, and two Master Kush in front of tent.

Martian Kush from the tude:
DNA Genetics is another high quality strain, combining two of our CUP winners - Martian Mean Green x The OG#18 Martian Mean Green crossed together with The OG#18 making this cross out of this World when it comes to strength, taste and smell the Martian Kush has it all! Martian Kush will stretch so pinching is suggested. Large Clear Resinous Trichome's will make this strain a concentrate connoisseur's delight. Expect above average yields from this instant classic.

Master Kush From Nirvana: First called High Rise, this strain of marijuana was developed in one of the tall buildings in Amsterdam's Bijlmer area. Coffeeshop owners and marijiuana lovers alike fell head over heels in love with this exclusive tetraploid cannabis strain. By popular demand, this Hindu Kush / Skunk hybrid was stabilized and marketed, and it has been a classic ever since. Master Kush Seeds develop into strong cannabis plants of medium height and bushiness. Master Kush is a heavy weed producer which thrives in soil, hydro and greenhouse growing systems. It has a pleasantly earthy, mossy smell and its smoke is smooth.

Ive grown the Master Kush twice with good results. I ran out of seeds and had no clones so I germinated two Mast Kush to join these. I have not grown different strains in the same grow because I don't want any conflicting characteristics but was kinda forced to this time.

The Martian Kush has already shown me she grows taller so they'll need some major super cropping to keep even with the Master Kush. Ideally we're looking for max height of 28-30"

They were both veged using Gas Lantern Routine, 12 hrs lights on, 5.5 hrs off, 1 hr on, 5.5 hrs off. This saves power and the 1 hr on in the middle prevents going into flower. However, this also makes them show sex early (all fem) and when flipped they begin flower faster.

In flowering period I will use a diminishing light schedule, going from 12/12 to eventually 15 hrs off and 9 hours lights on. This speeds up flowering a little and really boosts production late in flower.

These girls were stripped of nearly all fan leaves once in veg to promote more branching and tighter nodes. They got some more but not full defoliation in veg because of the ph being too low and locking out some nutrients so I didnt go hard on them. Now that everything is right I'll hit them hard after stretch. After the first stripping of fan leaves in flower I'll nearly daily remove fan leaves to provide the most light penetration possible to all the flowers top to bottom.

Goal is 2 #'s dry yield but now knowing the Martian Kush I have no idea if we can get there.

Here's some pics from today: 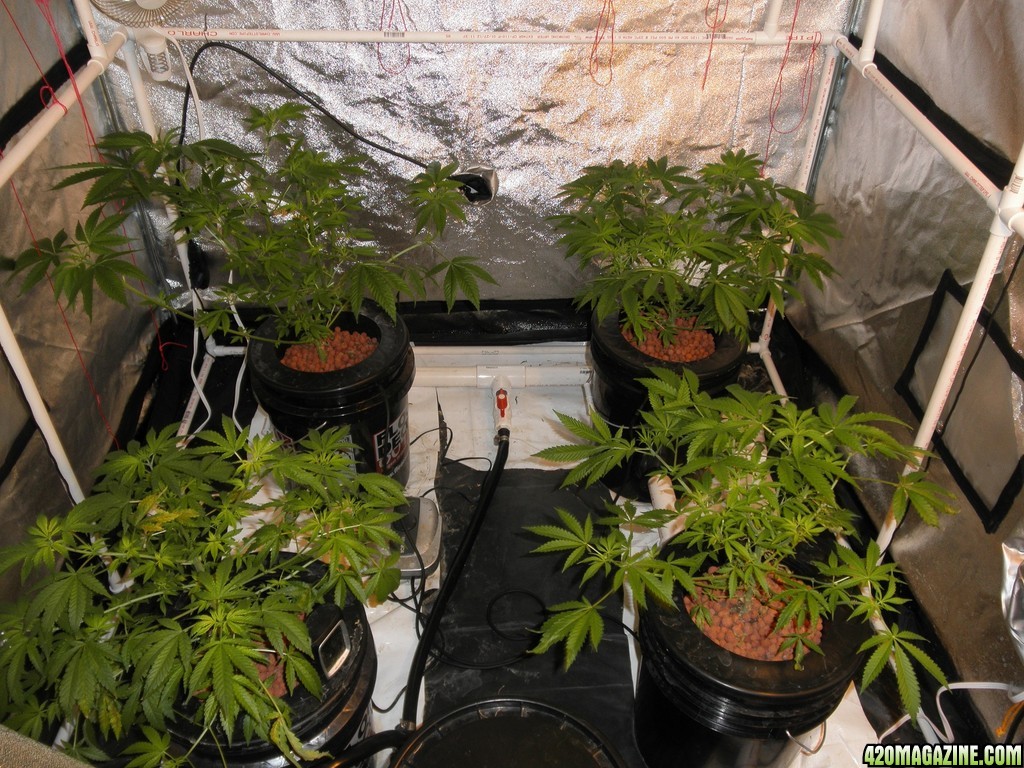 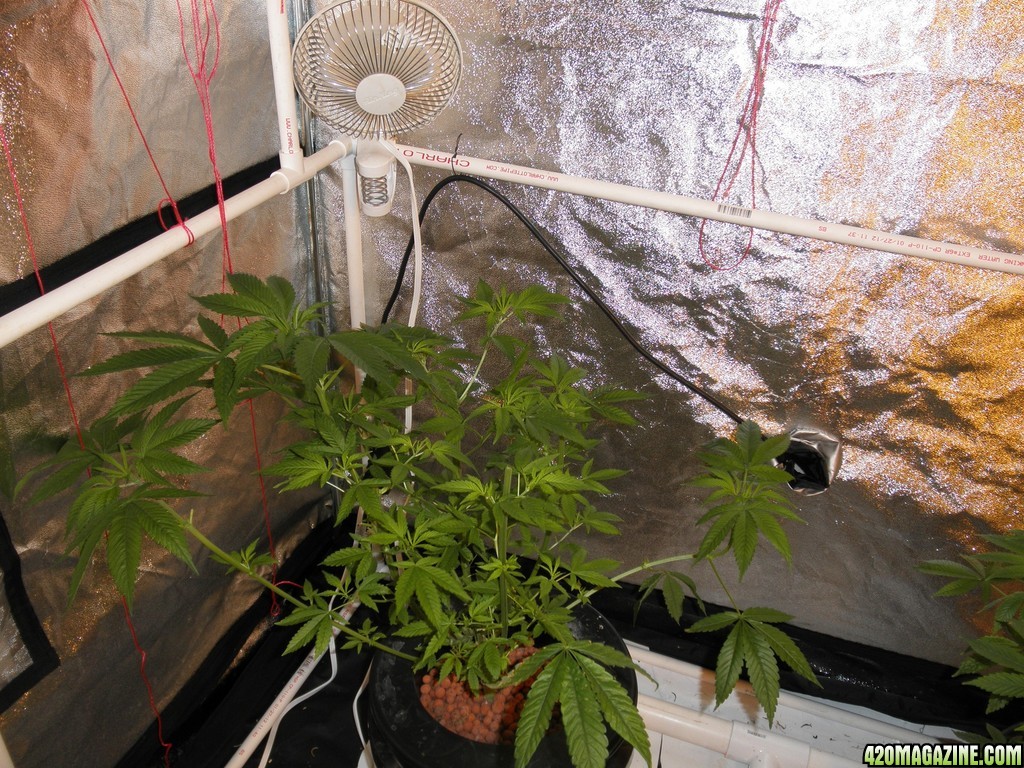 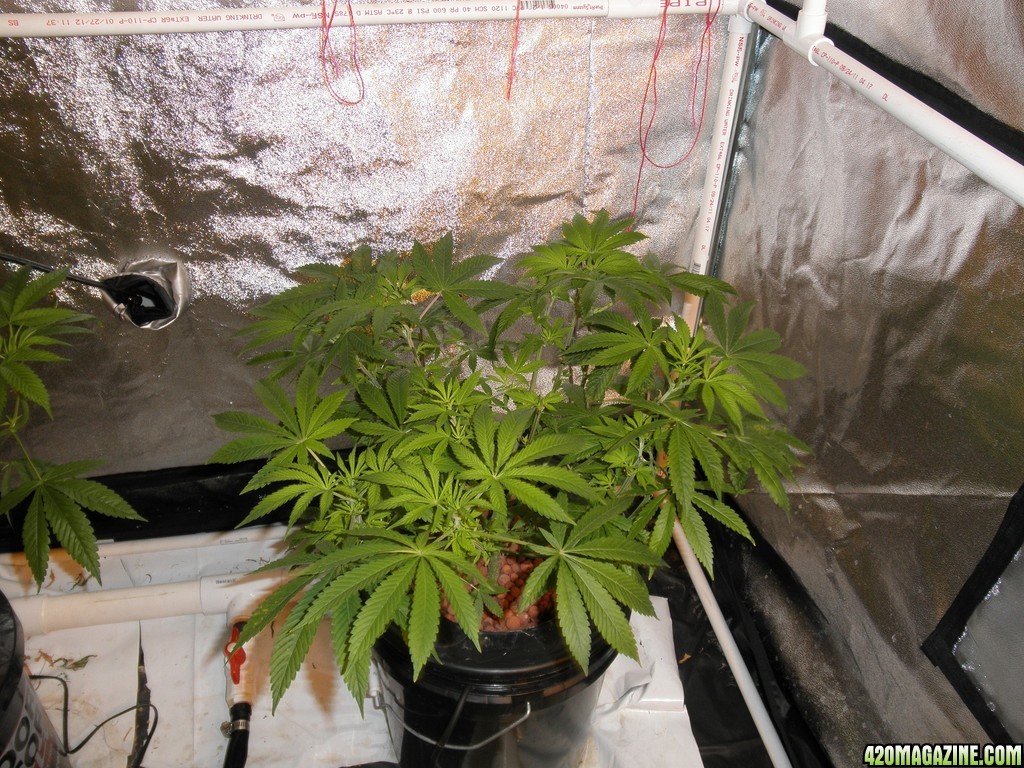 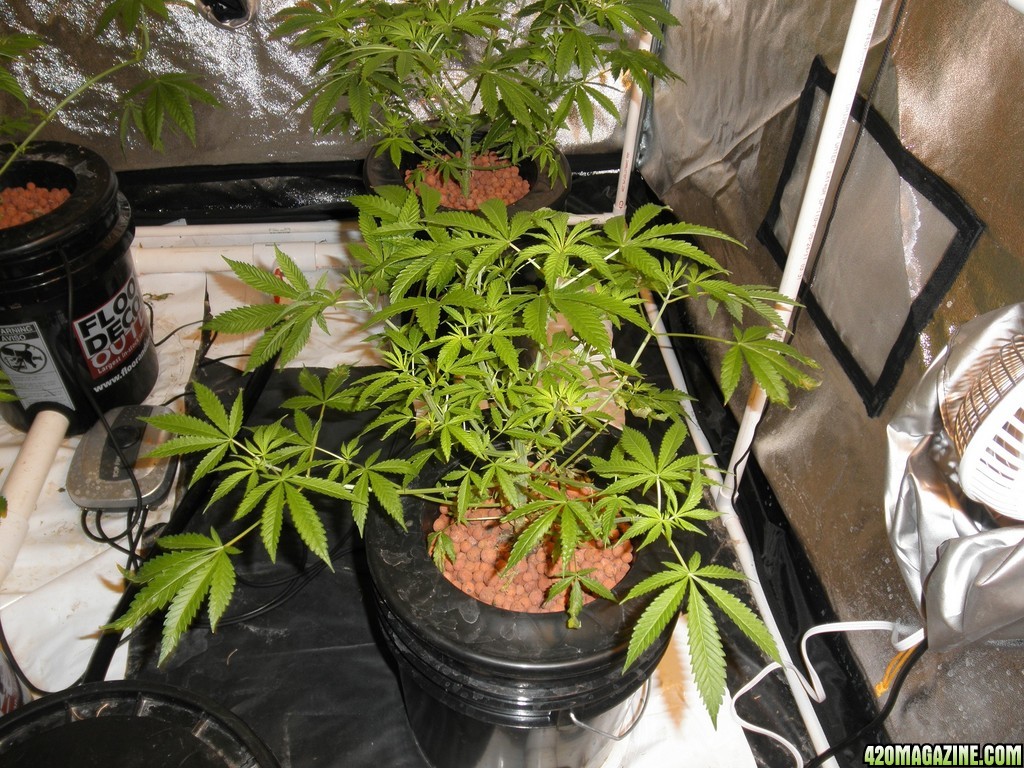 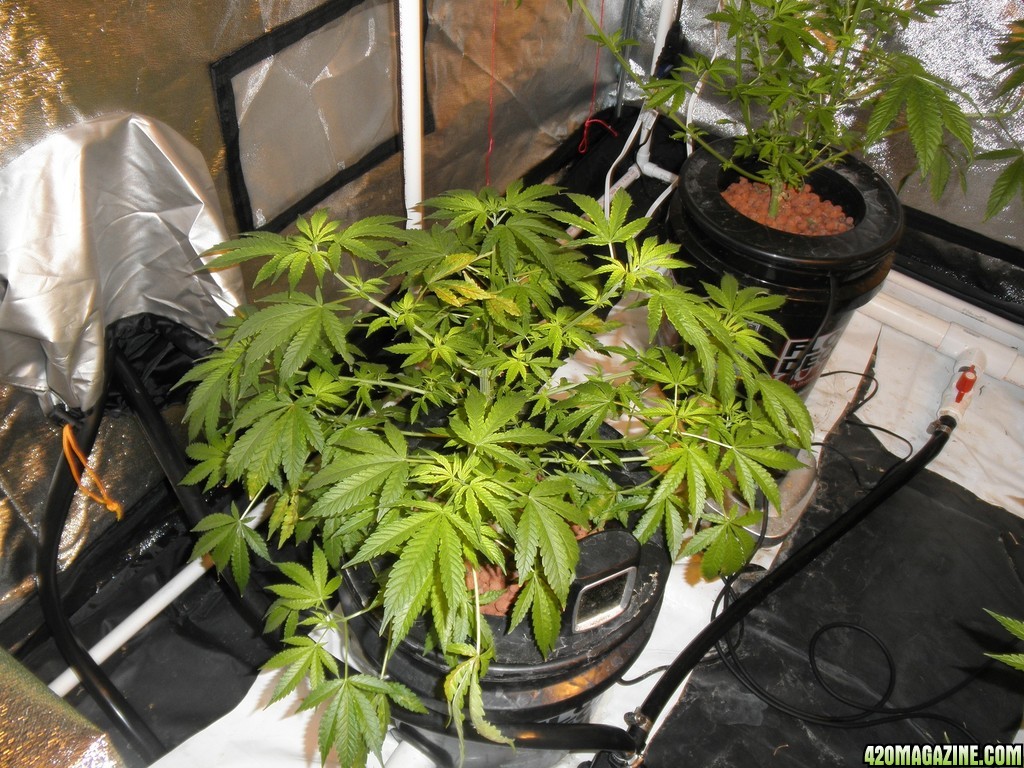 Can't wait for this one! You've been extremely helpful and have opened my eyes to a complete different style of growing which I feel is ideal for my room. Really appreciate you friend! Thanks for Sharing. One of these days (when I'm not as embarrassed of my setup compared to yours and others) I might even have my own journal to share! Thanks again.
B

Doc,
Don't be embarrassed! The best way to get some help is to start that journal! Ghetto grow or not there may be lots of great help available to your own situation if you just show it to others.

Wouldn't miss this for anything!!

I'm subbed, the martian kush sounds really nice. Bass do you know how many days you flowered the previous grow once you flipped to 12/12?
D

Hey bass what day are these girls at for you now?
D

im glued to this one, cant wait to see this Martian Kush

op:
Pt-2 Korloin Goes Hydro!![/COLOR] - In Progress
Korloin's First Journal- Drizella and K.O Kush!! Now with more Darkness!! - Completed
Useful Info!
How to Grow Marijuana - Everything You Need to Know!
The Art of Watering - DJ Short
Cannabis Plant & Pest Problem Solver - Pictorial
What you are basically, deep, deep down, far, far in, is simply the fabric and structure of existence itself. - Alan Watts
B

@DocDee, Hell, I dunno. I pay no attention to that in veg. I just plan to generally flip about 1 week after a harvest. That gives me a week to dry, clean, then take vegging girls out of closet and into tent. Going further this time because I had to with the heater issues and needing to take clones and defoliate a little. I dont want to flip right after a defoliation. So I'm giving them a few more days. My guess is 6 weeks of veg?

I'll give these girls 24 - 36 hrs of lights out then into 12/12. Probably by Sunday, maybe earlier, maybe later, all depends on how much re-leafing I get between now and then.

I've also got 16 clones to deal with and some beans on the way. I know I'll germ the Kosher Kush asap, but maybe only 1-2 to get a mother, then take her clones for a later grow. Unsure atm. I just know I'll have to spend some $$ very shortly with all the clones and make some decisions. Ideally I'd have 4 Kosher Kush ready for flower by the time this grow here harvests. Might actually be possible if I get the seeds by Mon-Tues which is highly likely. I can veg four Kosher Kush in closet under HO T5. But my 4x4 tent will only take the 16 clones into flower by going small and changing up how I grow. Since I only know dwc-rdwc, I'm open to ideas for a 16 plant grow from clones in a 4x4 area. Lighting wont be an issue. Oh and it has to be diy. I aint buying a system!
Defoliation Hi-yield advanced growing technique
Present Journal: Greensun LED Holy Grail Kush RDWC CURRENT
Kosher Kush RDWC, Grow #7 COMPLETED
Master Kush & Martian Kush, Grow 6 COMPLETED
Newest Master Kush Grow Completed
Grow #4, Kosher Kush Completed
Master Kush Hi defoliation RDWC LED Completed
Grow #2 AK48 clones Completed

Should put down a layer of plastic on the floor of the tent while the plants are still small. Run it up the walls a little to cut down on leakage. Doesn't have to be fancy to save you some headaches.
Fast, Cheap or Good.....pick two

Hi mate subbed. What did u want me to look at in particular mate? i dont see no questions?

if ur going 16 plants in a 4x4 thats pretty tight squeeze. are u looking at hydro? id be inclined to go coco.


Cultivator said:
Hi mate subbed. What did u want me to look at in particular mate? i dont see no questions?

if ur going 16 plants in a 4x4 thats pretty tight squeeze. are u looking at hydro? id be inclined to go coco.

ahhh brain storm! forget coco. a 16pot wilma system would fit in that space perfect im certain. i'll get the dimensions for u or u could build ur own. 16 6.5litre pots. clay pebbles. blue arrow drippers. feed 3-4 times per day for 15 mins and 4 times in flower. under 1000w hps, yield easy 30oz min and upwards of 40 if done well. 2 600w be better but would prob be a tight squeeze.
Click to expand...

google wilma system and check out my last journal. it ended up a disaster with rot but that was my fault. its drip irrigation recirculating. u cand get real good crops from them and are so simple to use. a 16 pot sog style suits me but u could go for a 9 pot and grow bigger plants.

The Martian Kush in the back are tallest and one in top left got it's 1st suppercropping. Going to have to really be on it to keep them in check for height. The Master Kush's in front are great.

My RH is low at 21-29%. So I took the larger fan out. As they bush up a little more the RH will climb. I'm not going to fret over it but I'll keep my eyes open and possibly add some humidity if I feel it isn't going up enough over the next few days.

Temps are high at 84f. I turned the light down to 75%. Going to keep an eye on temps for sure.

Ph was at 6.39 when pics were taken, 3 hrs or so after lights on. So I added some ph dn. This isn't unusual. Once I get it around 5.8 they'll stay in the zone most of the time and only minor adjustments will be needed.

Water temp was at 69f so I dropped the chiller set point 1 degree.

Pics are not great but here's two: 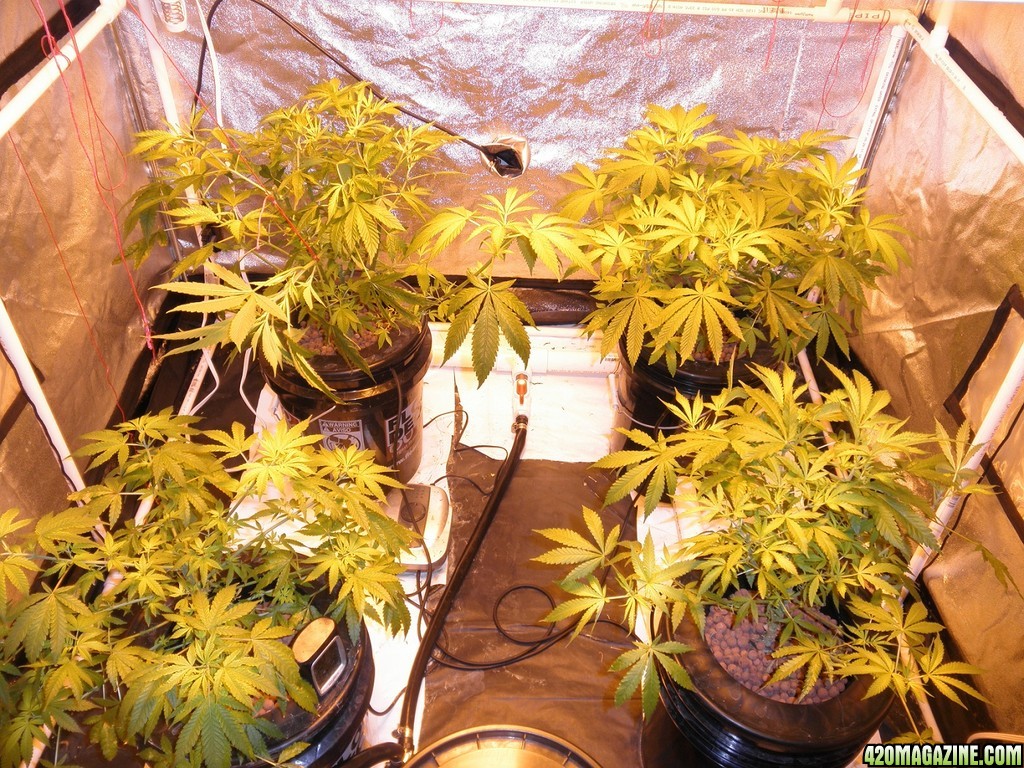 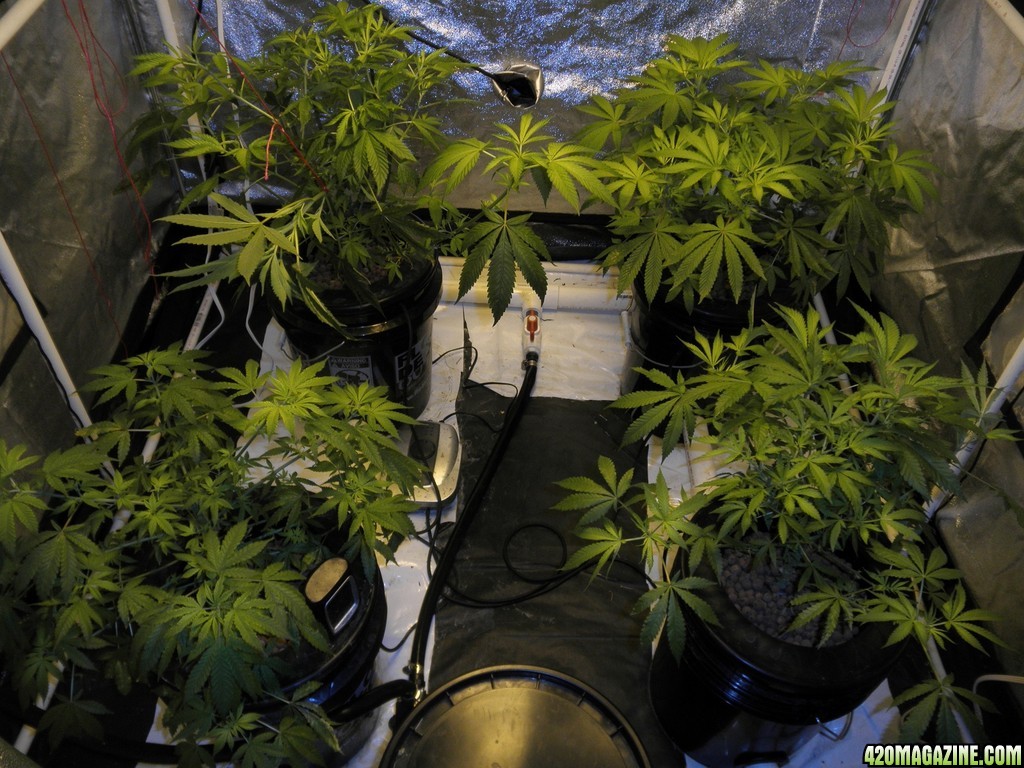 Nice looking ladies! Should fill that tent right up. I guess I'm a newb cuz I really don't know what super cropping is. Is it just bending along the side branches to open it up?
B