Haven't Killed It Yet

Hello all. I never thought this would get off the ground. Its only been 2 weeks and the poor dear has been through a lot.

I guess some background is in order. My first grow was many years ago after college...got my first place, a 'real' job and bought myself a Phototron. Add bagseed, and voila! Itsy bitsy airy buds. Fast forward a couple years and Im now in a house, with an addition to the basement with a bookshelf door. SAME phototron plant cloned into a roughly 10' x 5' space with a 1000k MH and a 1000k HPS, giant CO2 tank, and a couch to watch them grow. I ended up with a freezer full of non cured bud that I thought was the best Id ever smoked...

Now, 25 years later I thought Id try again. No longer have the awesome basement area, Im having to do with a small closet, roughly 36" x 24" x 8'. Lights are now LEDs...currently using a cheapo 45W panel.

The grow started out in an Aerogarden. 1 Seed of Auto NL by Pyramid breeders. Germinated in paper towel, then put in the aerogarden plug. Damaged the roots trying to free it from the plug during transplant...lost a good inch of tap root, but moved it to a jiffy pot. Still under the aerogarden LED panel. It continued to amaze me with its sturdiness. I have since popped it into a 5gal smart pot with a 50/50ish mix of coco and perlite. Feeding a seedling regimin of GH 3 part at 5.8 with tap water. With a touch of CalMag thrown in.

Picture is at 13 days from sprout. The smaller friend in the pot is a WW x BB I popped when I couldnt believe my first bean would ever pull through...Im hoping the abused auto fill finish before the WWxBB needs to flower.

I really need to read more 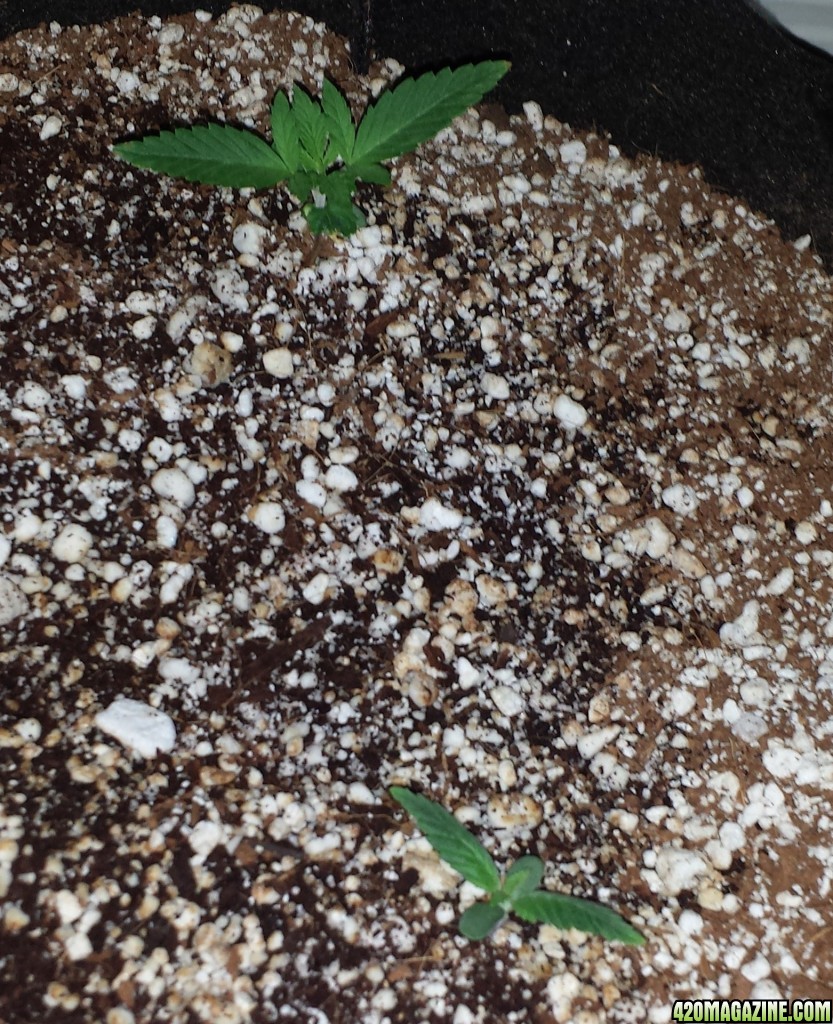 I'll pull up a seat and watch you not kill them if you don't mind.

These plants are very resilient, they'll take a beating. But then in some cases they don't at all, haha. Glad you decided to join up and start a journal for us to read along as you grow. Good luck with your rekindled grow fever, that auto will be done fairly fast, but some can take 100+days...thanks for sharing,

Thank you both for pulling up a seat

I will try not to disappoint. Lights just went out here, so I'll check on them again in a few hours. Have to say, I really am shocked the NL took the beating she has.
2018 Harlequin x Kosher Kush Build a Bear journal

Not too much to report. 2 more sets of leaves on the Auto NL, and the WWxBB is plugging along too...though her leaves seem to be keeping their cupped appearance. Keeping to minimal waterings. Will post pictures tomorrow after my son heads back to his moms house.

While waiting, I have been rummaging around in many of your journals checking out the beautiful plants.

I have also been considering Sue's LOS thread and seriously considering cooking up a batch for my next grow. I have some Dark Devil seeds coming and Im thinking this may be the way to go. The bud pics in the DD thread got me hooked.

Happy Easter everyone...collect all the rabbit berries for me please

Well it sounds like you are doing well. Keep it up! If they have reached their 4th node you can go ahead and top or FIM the WW. Possibly start some LST if you haven't. Just a little simple training will help you save some vertical space and increase yield.

The WW is only on the 2nd so far, and I have beaten on the NL so much, Im not sure I can get away with any more abuse. I think Im just going to see if I can get her to grow out successfully. The WW was really me being impatient and lacking faith. Since they are both in the same 5gal pot Im not sure how this is going to play out. I really have only room for 1 plant.

The WW is only on the 2nd so far, and I have beaten on the NL so much, Im not sure I can get away with any more abuse. I think Im just going to see if I can get her to grow out successfully. The WW was really me being impatient and lacking faith. Since they are both in the same 5gal pot Im not sure how this is going to play out. I really have only room for 1 plant.

I like a good torture movie. Hope nobody dies here tho

OK, here goes. The promised updates, if I can figure out how to get the pics from my gallery to here...the tutorial doesnt seem to match what I see on my screen, so...

I also decided to name my girls. First up is my NL Auto (Haley) 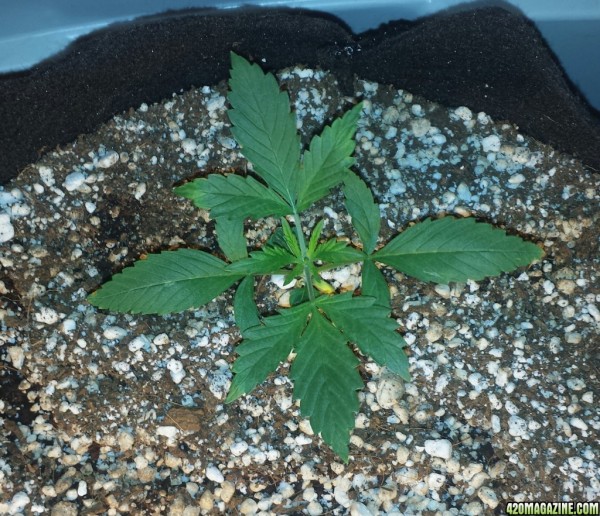 Next up is Baily, my WWxBB photo. She is slowly coming along. 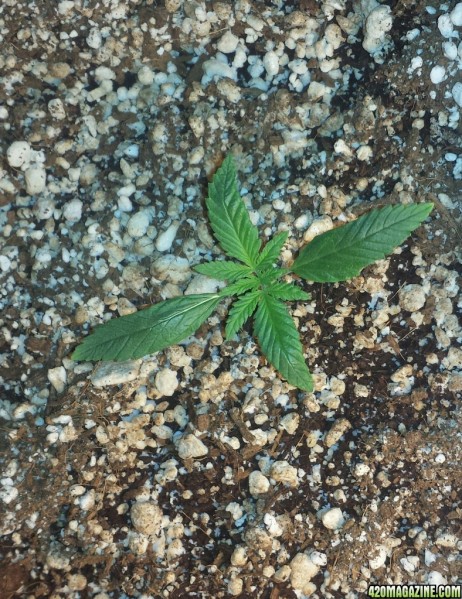 Medium still seemed to have some mouisture in it so I held off on watering.
2018 Harlequin x Kosher Kush Build a Bear journal

OK, photo shoot tomorrow when the runt leaves, but they are both looking pretty sweet...a little slow out of the gate but definately coming along. Last feed pushed nutes to ~ 600ppm.

On another note, my DDA seeds showed up today!!

Ok...the promised photos. First up is Haley at 25 days. She seems to have really liked the nute boost. May have to push the envelope and go bigger with the next feed. So far only watering once a week.:MoreNutes: 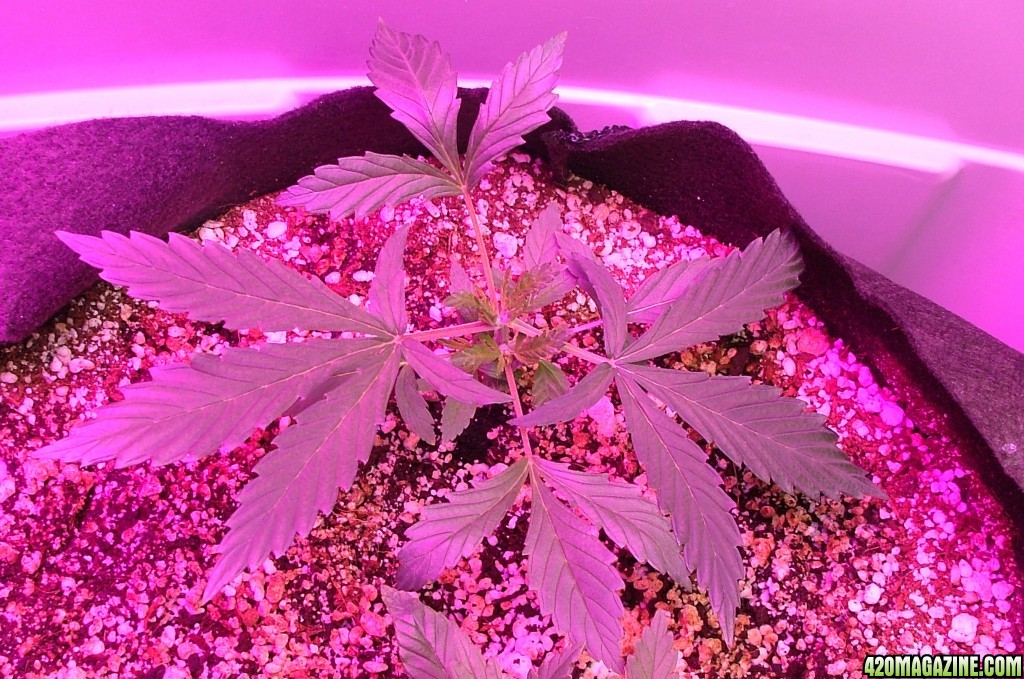 Then we have Bailey at 23 days above ground. Also lots of new growth since the nute boost. 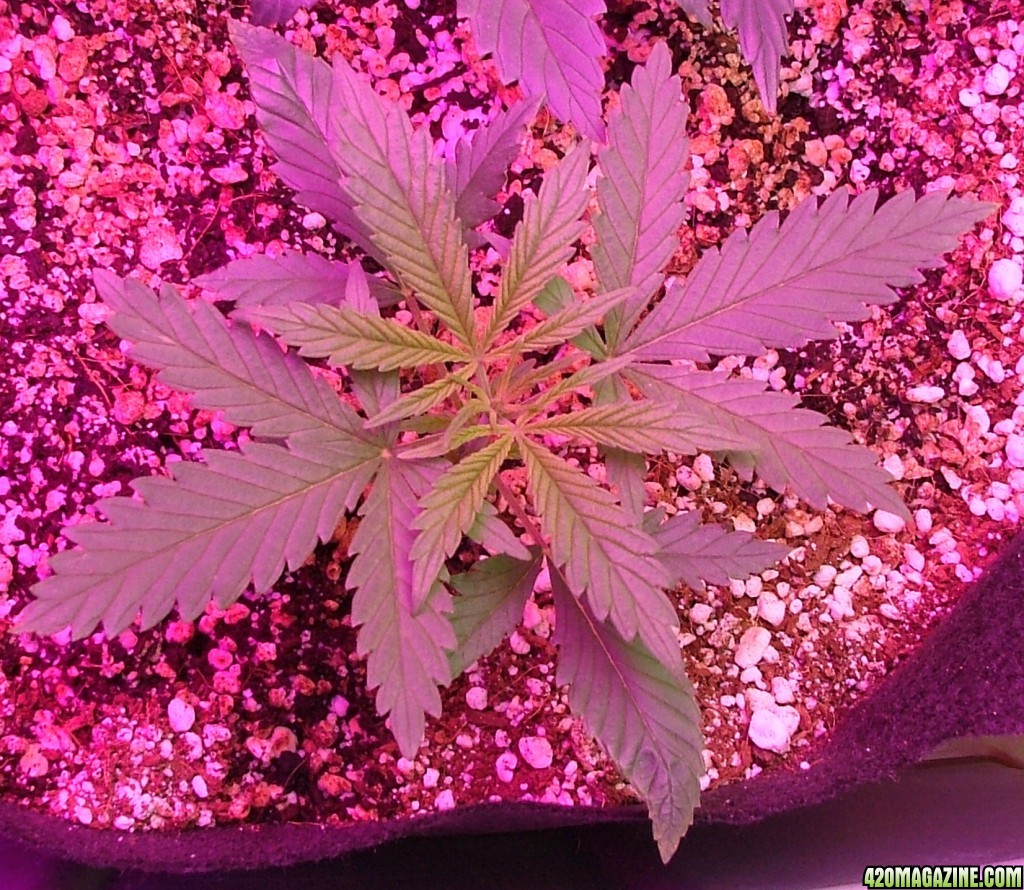 I also added a couple of tupperware bowls under the pot to get it out of the runoff, and cut the lights back to 18/6.
On another note, the Dark Devil is in a baggie of wet paper towel

As soon as the AmEx resets for the month Im going for a tent...and a new PH pen

Ive got better lighting, but Im running into heat issues. I was going to vent the closet, still may for another room, but the tent will save time. And with Prime shipping, I can have it here before I need it.
2018 Harlequin x Kosher Kush Build a Bear journal

Well, my Dark Devil germinated overnight. She's in a SOLO now waiting to greet the day. As soon as she pops up her head I'll hop onto the DD thread

Not much to report today. Bent Haley over and topped Bailey. The DD sprouted,but she looks rough...going to withold naming until Im sure she will be joining us. They are starting to emit a subtle stink and Haley is starting to get fuzzy.

Well, the wee little Devil didnt make it. Got her helmet stuck and never recovered.

Dropped another today...also let a little old lady use my AAA card when she locked her keys...and cute little poodle thing, in her car, so Im hoping Karma is on my side this time

Haley and Bailey are growing fast. Haley pulled out all her anchors while I was at work.
2018 Harlequin x Kosher Kush Build a Bear journal

Well, the boy is with his mother this weekend, so I get some more quality time with my babies. 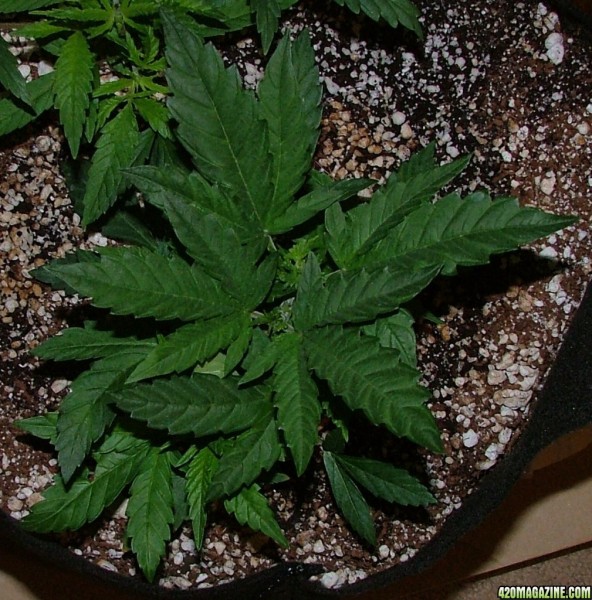 Then, post trim and pony tailing...with the help of kitty. He really loves the fan leaves. 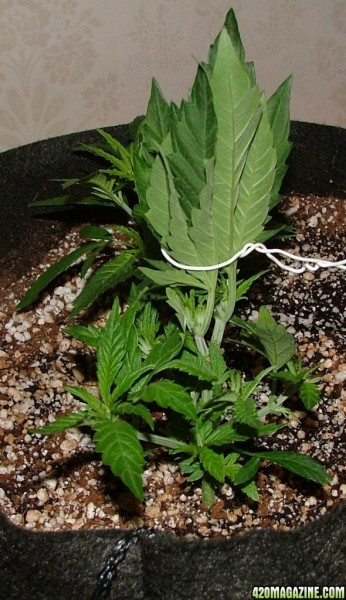 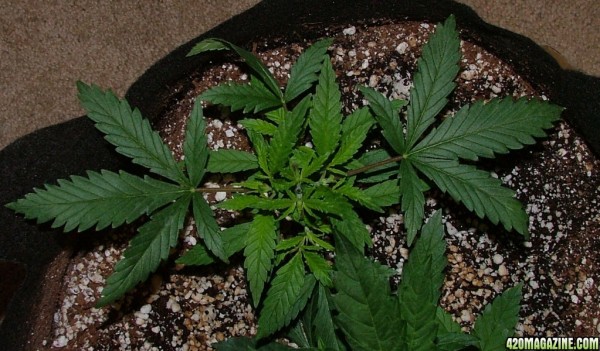 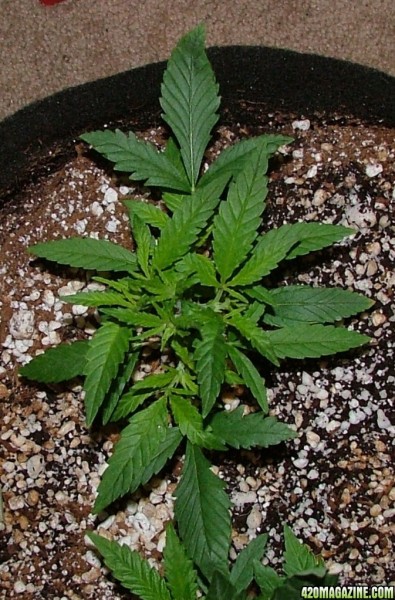 Im hoping to encourage all that under-growth to fill out a bit. Still regretting tossing both in the same pot, but I'll make it work somehow.

Still trying to get me a Dark Devil...2nd attempt has yet to surface. Put the last 2 beans in tissue on the cable box today. In the meantime, I popped a Blue Dream, and her first real leaves are out.

Got more toys arriving this weekend...2 gal smart pots, USB microscope, big bud and overdrive, and a new PH pen. Tent should be here on Monday. Still trying to figure out how to stealthify that puppy.

GrizzWald said:
Hey mouser, I'm in..Haley and Bailey looking healthy... I got daughter every weekend, gardening happens weeknights around my place, lol... Got here just in time to see the rapid growth...
Click to expand...

Not sure son would notice if I trimmed in the kitchen...plants and snippers have nothing to do with XBox controllers :/, but he is very much under the brain washing influence of the public school system. Fortunately Ive always been a sneaky bastid, and Im pretty confident I can keep things under wraps until he is ready to think for himself. Glad to have you on board

Looking good, if its ok I will take a seat and observe if you don't mind

puregreen said:
Looking good, if its ok I will take a seat and observe if you don't mind

pull up a chair, or join Sue on the floor