Sea tea - The must have foliar tonic

I have been using a sea weed tonic on my plants with phenomenal success. I am convinced it has boosted my plants and produced tastier buds. This information explains why it is so beneficial to all growers. SEA WEED TEA
A truly remarkable phenomenon is that seaweeds grow in the ocean and accumulates potassium but does not accumulate sodium.
The concentration of sodium in sea water is nearly a hundred times the concentration of potassium; yet potassium is accumulated, and sodium is excluded by the seaweed.
Liquid Seaweed is essentially an organic seaweed tea. It is sold as an extract which is diluted with water and applied to the soil, or most effectively used as a foliar spray.
Seaweed has been used by plant growers for centuries, but beneficial results has only recently been attributed to the naturally occurring growth regulators and micronutrients in the seaweed.
After years of research it has been established that seaweeds contain many naturally occurring plant growth regulators, namely cytokinins, gibberellins, and indoles.
In addition, it contains micronutrients such as iron, copper, zinc, molybdenum, boron,manganese, and cobalt.

This is the sea weed tonic I have been using. 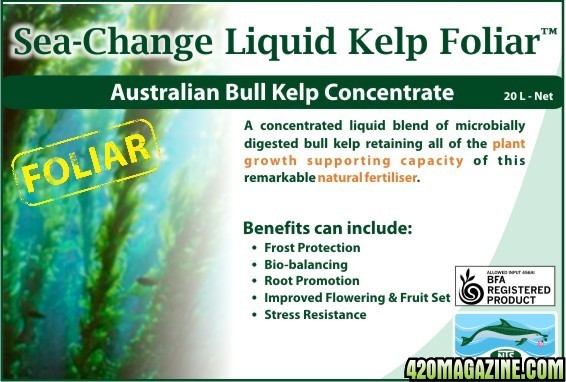 To date more than 60 different types of nutrients have been confirmed.
However seaweed in itself is not a plant food, rather it is classified as a "bio-stimulant."
Many seaweed products also contain a chelating compound known as mannitol,which chelates micronutrients into forms that are readily available for plant use.
Seaweed contains several chelating agents the most important of which is mannitol.

Seaweed contains natural plant growth regulators.
The major plant growth regulator are auxins, cytokinins, indoles and hormones.
These are in very small quantities generally measured in parts per million.
Seaweed stimulates beneficial soil microbial activity, particularly in soil around the feeder roots resulting in a substantially larger root mass where the beneficial fungi and bacteria known as "mycorrhizae" exist.
This area of the soil is known as the "rhizosphere."
The rhizosphere activity improves the plants ability to form healthier, stronger roots.
Cytokinins are hormones that promote growth by speeding up the process of cell division making seaweed extract of value in treating tissue cultures.
When they are applied to foliage the leaves rejuvenate stimulating photosynthesis.
Auxins, also hormones, occur in the roots and stems during cell division. They move to areas of cell elongation where they allow the walls of cells to stretch.
Auxins actually give fruits and vegetables a naturally longer shelf life.
This is known as delaying senescense: the deterioration of cells and tissues that results in rotting.
Gibberellins are other important plant-growth hormones; more than 50 kinds are known.
They control the elongation of stems, and they cause the germination of some grass seeds by initiating the production of enzymes that break down starch into sugars to nourish the plant embryo.

Hundreds of research reports have been written about seaweed and the micronutrients and growth regulators contained within them.
There are various methods used to identify the individual organic and inorganic compounds present in seaweed.
Without identifying individual compounds, scientists can test for responses in plant material which resemble the responses of plants to known individual compounds, such as cytokinins, auxins and gibberellins, through the use of bio-assays.
Farmers and gardeners should not become too involved in the science of why seaweed produces the results which have been demonstrated over decades of scientific research, field observations, and practical experience.
Rather, they should concentrate on the benefits and results of using seaweed products in their homes, gardens, and fields.
In recent years the results of scientific research provided evidence that seaweeds contain more than 70 microelements and is considerably higher than it is in terrestrial plants.
Plants use tiny amounts of the micronutrients often measured in parts per million.
This helps to explain why foliar spraying can be an effective way to deliver these nutrients to the plant.
Seaweeds are found in all of the oceans except for the tropical western coast of Africa and western Central America.
Last edited: Aug 4, 2007
P

I'm curious...when and how often do you feed this?

Also, if you'd be so kind, do you get your best price online?

I use my sea tea every 5 days at half strength dilution from day one. I stop using it at the end of week 4 of flowering.
If you are ordering online, check for retailers in your own country as costs of freight are expensive. You can get powdered seaweed also, but I prefer to use the liquid version. Bull kelp is in Australian waters, but as I said earlier, kelp in general grows on all coastal areas. You could of course collect your own kelp(seaweed) and liqui-compost it to make your own tea. My conversion rate is 700gms kelp per litre of water. I have to tell, you some of the kelp compost can get mighty stinky.

I think i will be using some of this on my next grow.
Grow Journal - Cinnamon - (Sativa) Jack Herer pheno in progress

I used to use Maxicrop on my garden when I lived in California. I had beautiful roses 10' tall - had to stand on a 6' step ladder to dead-head them. It's a great foliar supplement. I used to use the soluble powder. It's from Norway, you can order directly from the US distributor. (Maxicrop.com)
Marijuana, in its natural form, is one of the safest therapeutically active substances known to man.
By any measure of rational analysis marijuana can be safely used within a supervised routine of medical care.
FRANCIS L. YOUNG, DEA Administrative Law Judge​

So even if my plants are in the vegetation phase at the present time, I can give them sea weed tea?

Do you recommend I give them the seaweed tea even if I am giving them vegetation phase nutrients? And same goes for when I switch them to 12/12 and hit them up with flowering nutes.
Last edited by a moderator: Oct 17, 2008
My Grows
1st - White Widow,
2nd - White Widow, Northern Lights # 5 and Big Blue

did you foliar feed or go through the soil?
Z

gardensalive.com they have powdered and liquid kelp

in addition to the sea rich

I found the australian stuff, its called Seasol. Available @ many places I found on google....

A local product called BIO FLORAL, since it was local, it was cheaper too. And why not encourage local compagnies right? They also had one from Advanced Nutrients, but it came in a half liter format, I got a smaller bottle because I don't have that many plants to use it on. It says to add 2.5ml per liter. Since it's a 250ml bottle, I have enough for 100 liters, which seems to be plenty for the time being! And if I run out, well, I'll just get an other..!
My Grows
1st - White Widow,
2nd - White Widow, Northern Lights # 5 and Big Blue

I've been trying to get my hands on a quart of worm casting, but they do have a 20quart of wormcasting AND kelp reading this I will be looking more into the kelp than the other organics, also can the wormcasting/kelp mix be made into surf and turf tea?
"The South's Finest"
First Grow - Unknown Sativa Dom

Plants love surf and turf! The tea you can make from worm castings is as good as sea tea, but a lot more variable. Vermi-tea has nutrients, unlike the sea tea, so you have to be more careful with application.
Last edited: Oct 18, 2007
B

I wanna steal em all

sea tea is weed's wheaties :27:
In a closed society where everybody's guilty, the only crime is getting caught. In a world of thieves, the only final sin is stupidity -

I apply the sea tea from the get go, every 5 days. I use half strength dilution to foliar, and the sea tea also goes in with the flowering ferts once a week. From week 3 or 4 depending on the stage of flowering, I increase that to full strength, and continue that to within 5 days of harvest.
T

With that monster White Widow grow under its belt , sea tea is the real MIRACLE GROW
Last edited: Dec 10, 2007
In a closed society where everybody's guilty, the only crime is getting caught. In a world of thieves, the only final sin is stupidity -

I feel like Don King tonite or something :rasta:
In a closed society where everybody's guilty, the only crime is getting caught. In a world of thieves, the only final sin is stupidity -

oh shit,,,i think i will have to stock up on that stuff!
Weed never killed anyone,,,,and if it did,,,STUPIDITY was involved.