A throttled-down 6"er can move more air more quietly than a 4"er.
Too, you do understand your need for a bigger grow space, yes?

Propa Gator said:
A throttled-down 6"er can move more air more quietly than a 4"er.
Too, you do understand your need for a bigger grow space, yes?


More so I understand the need to utilize technique to efficiently use the space I have. I checked out my green flamingo legs (a.k.a. stretched out main stems) yesterday and they measured on average 2' long. SCROG for the tall ones and pruning/SOG for the short, bushy ones should help.
Space and stealth are my main obstacles, Propa Gator. Not to mention a weirded-out metabolism that manages to shake even the meanest weed buzz off in half an hour.....

Space, time, the final fronteer.
Growers must be sneaky to get what we hold dear
Snoopy jealous neighbors are the ones to fear, and
Mainstream believers are the worst, voir dire
420 Magazine®
Creating Cannabis Awareness Since 1993

I think I may update my PropaQuote with that one!
The Budcave (A man, A shovel, an underground growroom) Lucy, GDP, Wild Thai, Blueberrygum, and more..

That 6" inline fan should be here by midweek. Even leaned over a little to keep the tops a foot below the lights, I still have hairs on all the top colas that browned from the heat. I did get it down to 87 degrees F, though.
It's close to that time, so I'm going to have to magnify over the next few weeks to tell what's up; I probably won't be able to go by the hair color now. I'll probably try to quick dry a few lower buds on this Quasar, too. I'll try to refrain, but the chimp's outta weed again..... :tokin:

I mixed up a dose of Monster Bloom last night for the Quasar and Ultimate plants w/ molasses and Cal-Mag. I've got some RO water to give to the Indica-dominant Warlock, and my next grow (5 Alaskan Thunderfuck fems) just broke ground 100% germ rate. I'm adding a SLH fem to the grow, but it hasn't cracked open yet.

The Quasar likes to go a little bit longer than others IME.....But the early samples were good too, honestly...
The Budcave (A man, A shovel, an underground growroom) Lucy, GDP, Wild Thai, Blueberrygum, and more..

GodsTrichome said:
The Quasar likes to go a little bit longer than others IME.....But the early samples were good too, honestly...
Click to expand...

10 weeks is spot on.
The Budcave (A man, A shovel, an underground growroom) Lucy, GDP, Wild Thai, Blueberrygum, and more..

I gave all the plants a dose of Monster Bloom today; mostly the Quasar and a light dose for the Warlock. Now comes the never-ending last few weeks until the finish. I've been keeping them at 12/12, so I hope they don't harvest early. They don't seem to be getting any bigger except the Ultimate. I'll post more pics soon.

At this point I'm going to start checking the trichome heads with a magnifier. The Warlock is closing in on its last week or two, and I can't tell from the hair color because the increase in heat shriveled and browned a lot of them up. It's about time for the change in hair color anyway, but the heat (and being so close to the lights) caused more of it than normal. Almost all of the fan leaves got dried up on the top part of the plants, but I can see where the nutes are helping in the smaller buds about 1-1/2' below the lights.
Heat is my problem. It causes the accelerated growth in height, which leads me to have to raise the lights, and everything 2' beneath the lights doesn't grow worth a damn and has to be cut off to increase the yield of the main stems. Later I wind up needing some of the lower shade leaves I cut off because being too close to the lights fries the upper ones. And I end my grows in poor yield because I don't plan well enough.
Well, the 6" fan and speed controller are on the way, I have the new setup laid out in my mind, and my pruning, bending and trimming are going to be done not out of desperation as a means to solve a problem, but out of prearranged thinking to prevent problems. It seems to be working on my GDP grow.
I ordered all the parts for the DIY SH Mystic Cloner posted here and I'm going to give cloning a try too. This SLH hasn't broke the soil yet, but when it gets big enough I'll use it.

On a brighter note, this thing is about a foot long and still puffing out..... 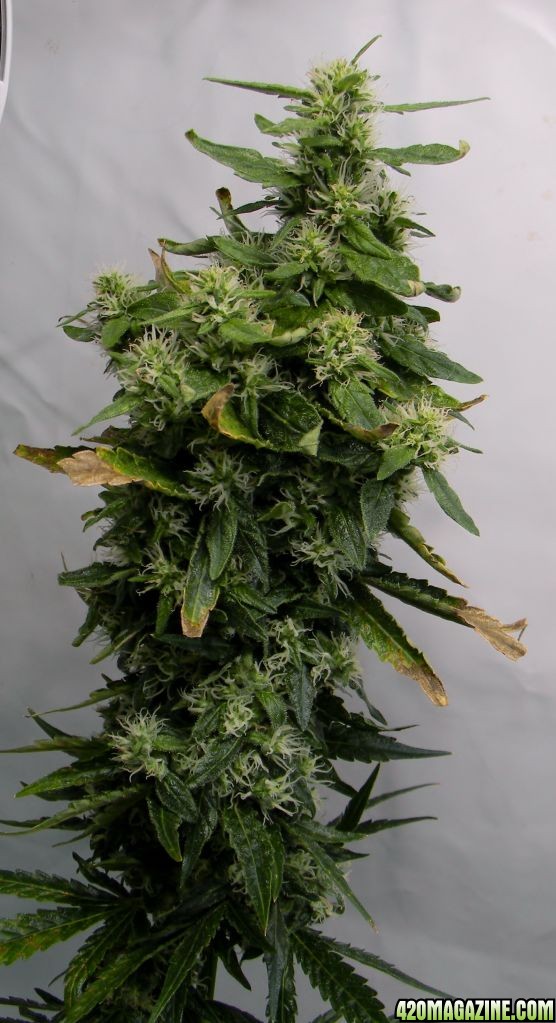 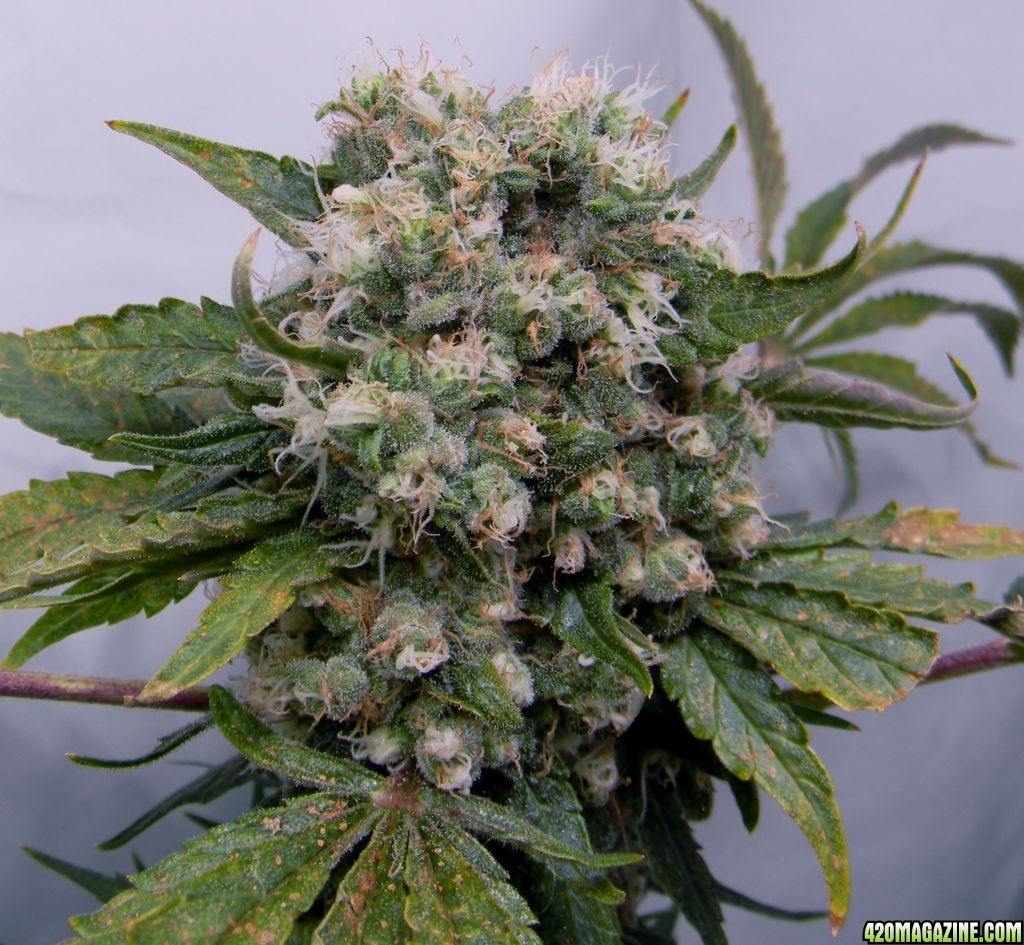 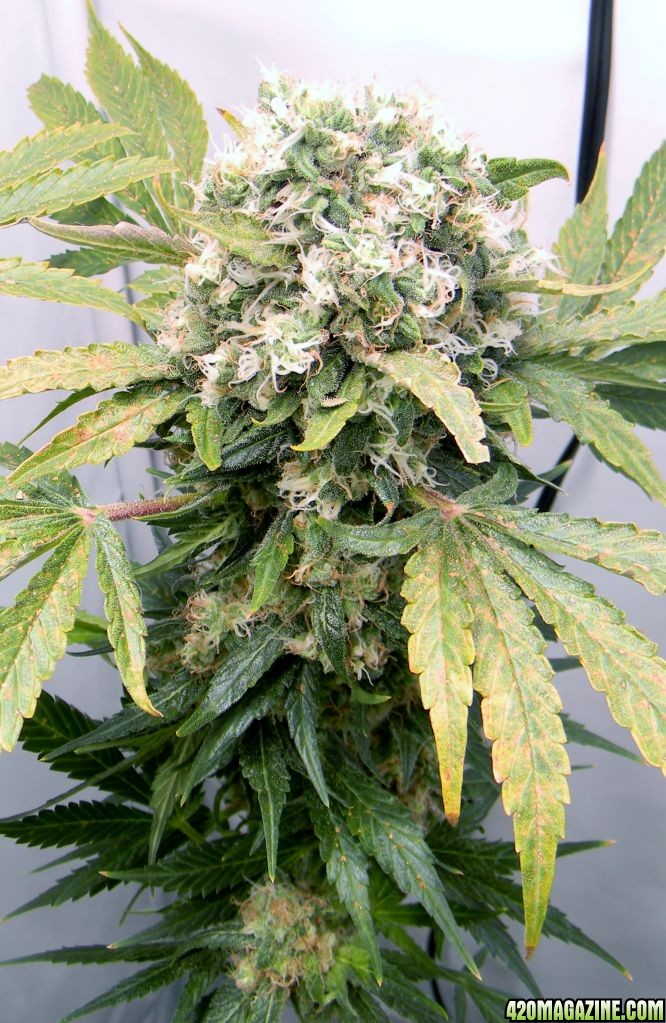 and magnifying those two colas (and the third little one I should have cut) pretty much puts me at about 50-60% opaque trichomes, 40-50% clear, all full, some heads missing and no ambers yet. So it's looking like that's it for size.
Here's the Quasar branches leaned sideways (one bent, and I laid it on the others for support so it should make it the last few weeks). 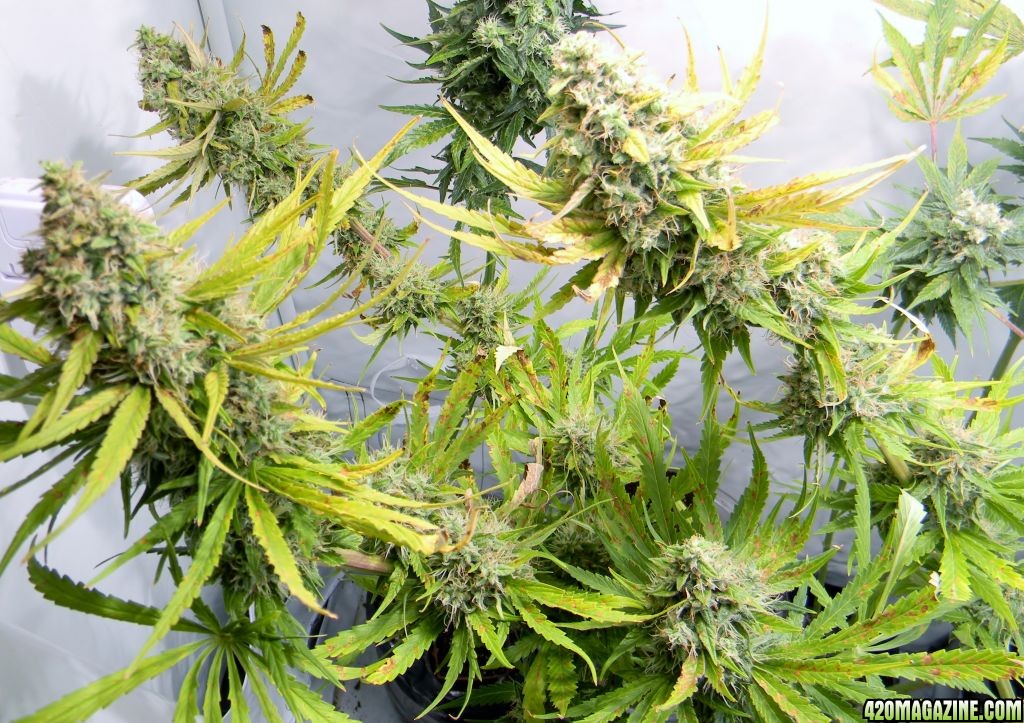 I'll be lucky to get a Q-Pee out of this mess, but then again I've been smoking on the lower buds, too..... :rasta:

If that's a mess, it's a fine Miss you're getting into, Chimp

Help when and where you can. Happy growing, Mark Green

What I am doing now:Perpetual multi-strain 2 liter SOG + BPN

Thanks, everybody. Can't wait to see that single Ultimate cola all the way developed; it'll probably weigh in at over an ounce itself. I'm thinking maybe 3/4 to 1 oz. on the Warlock, and hopefully 1 to 1-1/2 oz. on the Quasar. That won't last.....
PotChimp's Odds and Ends
PotChimp's Odds and Ends
My GDP Grow
Grand Daddy Purple - Pre '98 Bubba Kush S1

The hairs on the Ultimate still aren't turning brown, so hopefully it will keep getting bigger and maybe get rid of that Palmolive dish soap smell. Man, if I cut it off at the base and swung it at someone's face and it connected it would turn their head a little; it's got some heft to it.

The Warlock keeps getting closer looking, and I'm gonna let the Quasar go until I see foxtails (if it gets them) or the 10 weeks.
The Super Lemon Haze fem seed broke the soil, and it'll go up underneath these plants along with the 5 Alaskan Thunderfuck fems I have started for my next grow in this tent.

Killer brother, I cleaned out my closet..getting ready for the veggie and herbs. I'll start a Pakistan ryder for outdoor attempt #4.

Note : I harvested the Warlock yesterday after not finding but a few clear trichs and a few ambers starting. The Quasar is coming down tomorrow and the Ultimate hairs are browning up, but it still has a bit to go. Here's a few pics of the two harvested Warlock colas (I smoked the other one and the bottom nugs off of these two) 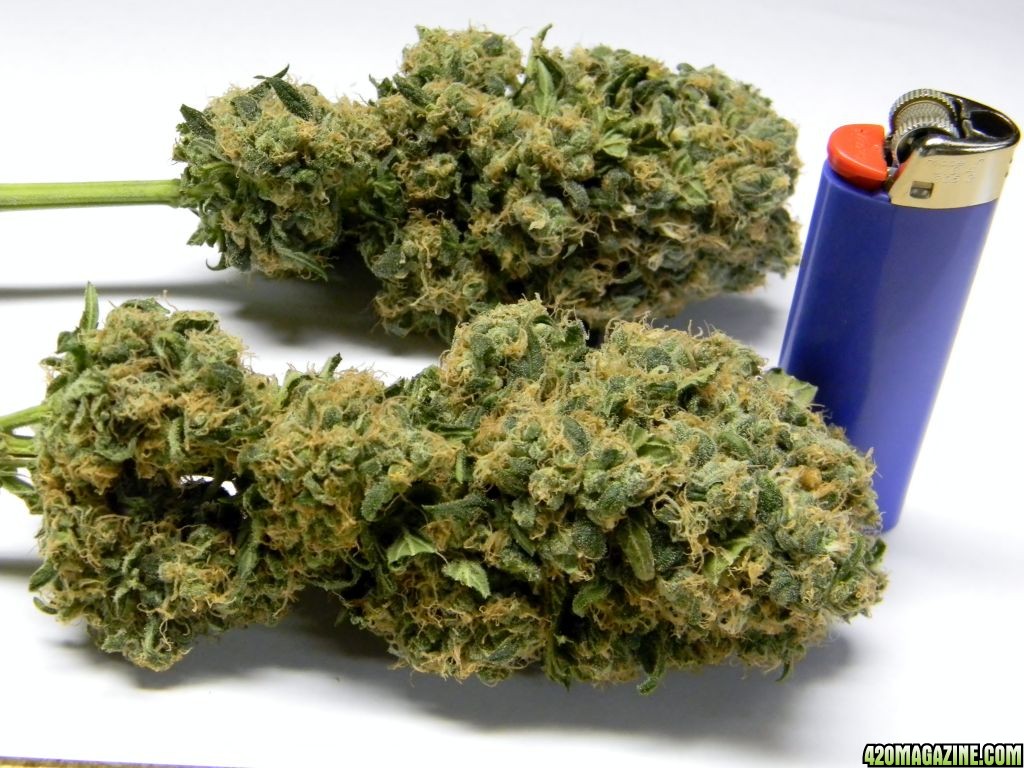 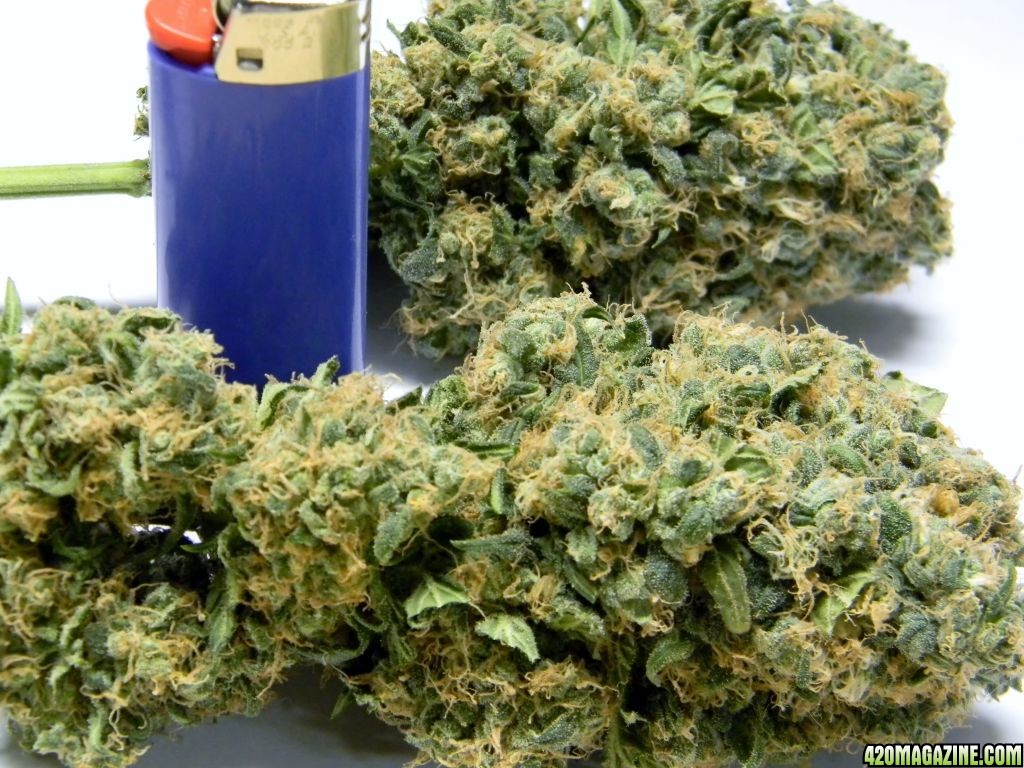 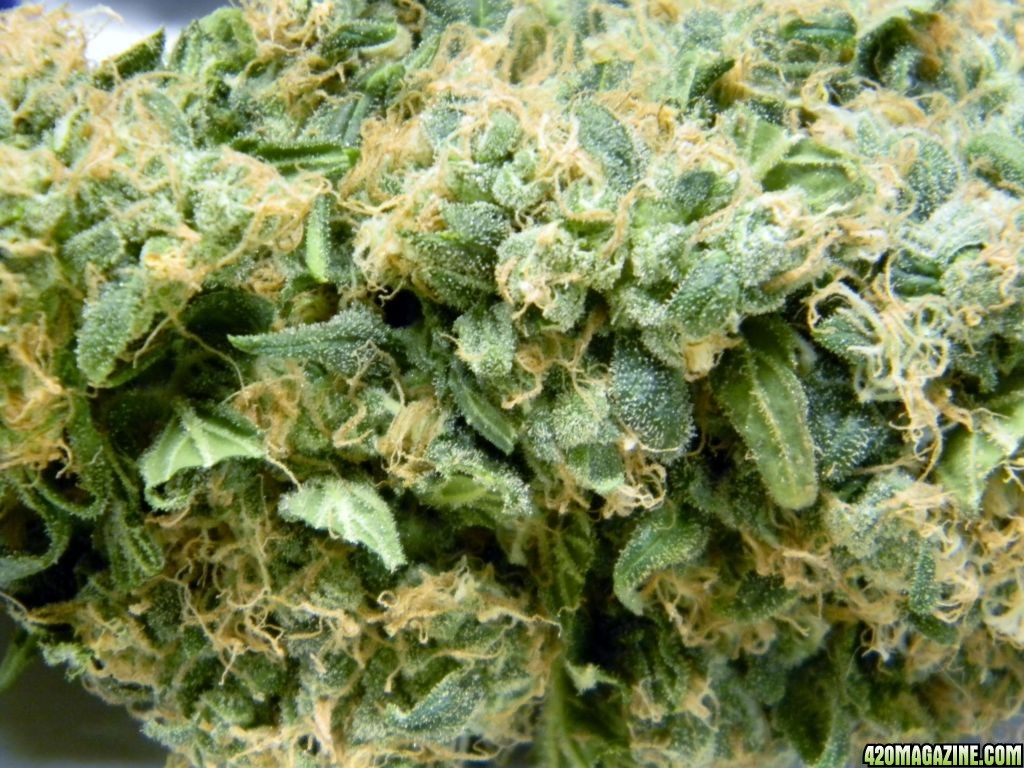