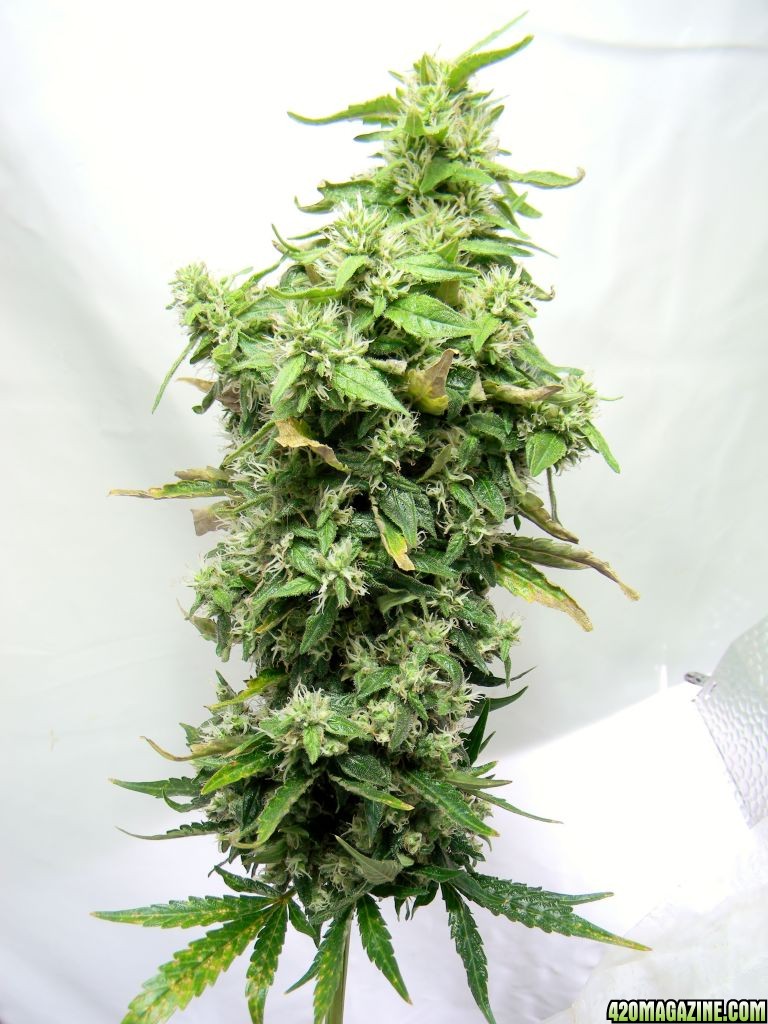 I chopped the Quasar this morning, picked the few remaining shade leaves off and hung them in my drying box. I'll trim them up tomorrow and take a few pics.

(kidding, kidding.....)
That cola from the Ultimate plant measures 10" from the intersection of the branches at the bottom to the top most green part (minus the hairs), and 4-1/4" across at the widest point. It's an airy type flowering cola, but should still weigh in at around an ounce. When I kill it off in about a week, I'll start my Ken's original Grand Daddy Purple regular seeds and an 818 Headband fem seed.
PotChimp's Odds and Ends
PotChimp's Odds and Ends
My GDP Grow
Grand Daddy Purple - Pre '98 Bubba Kush S1 Grow Journal

Quasar (after 24 hour dark period, chop, trim and smoked on a lot, just before drying) 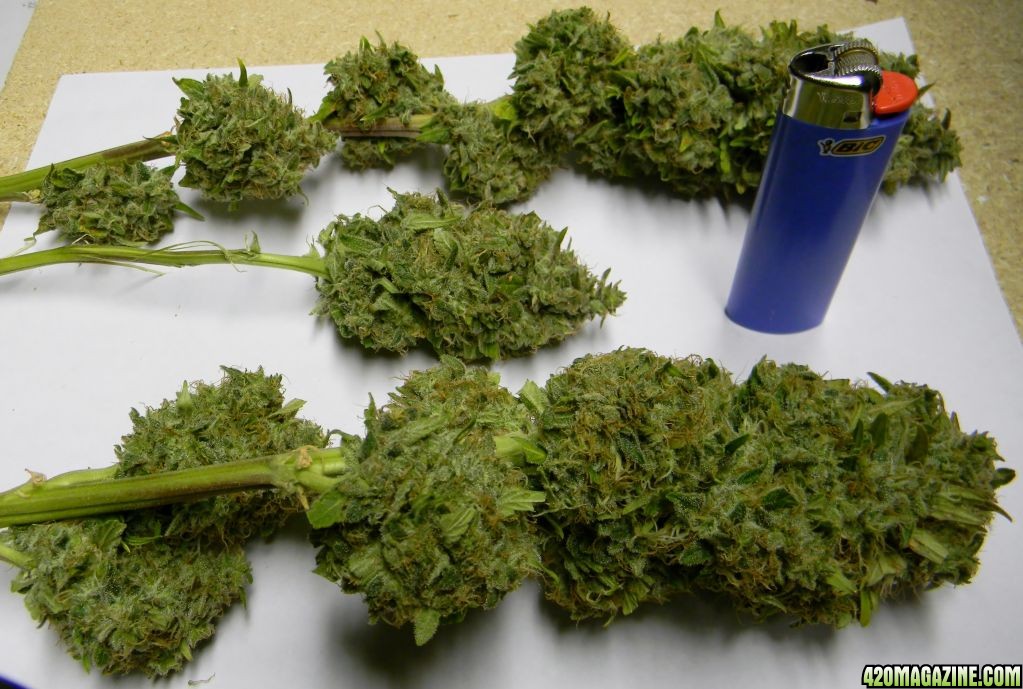 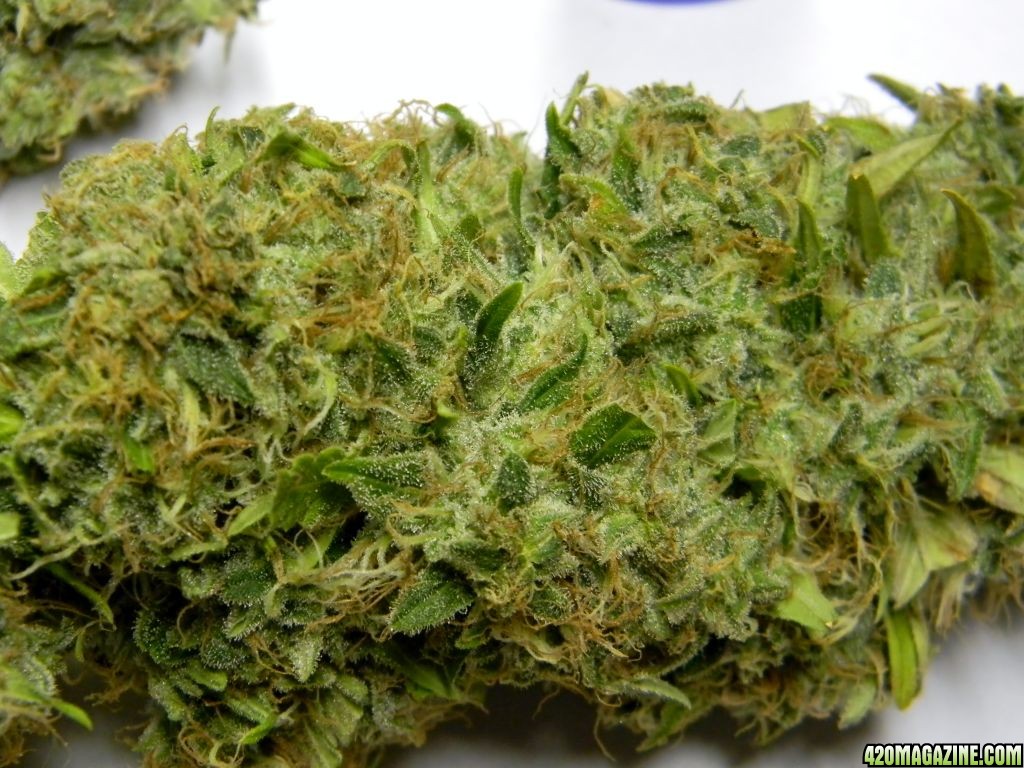 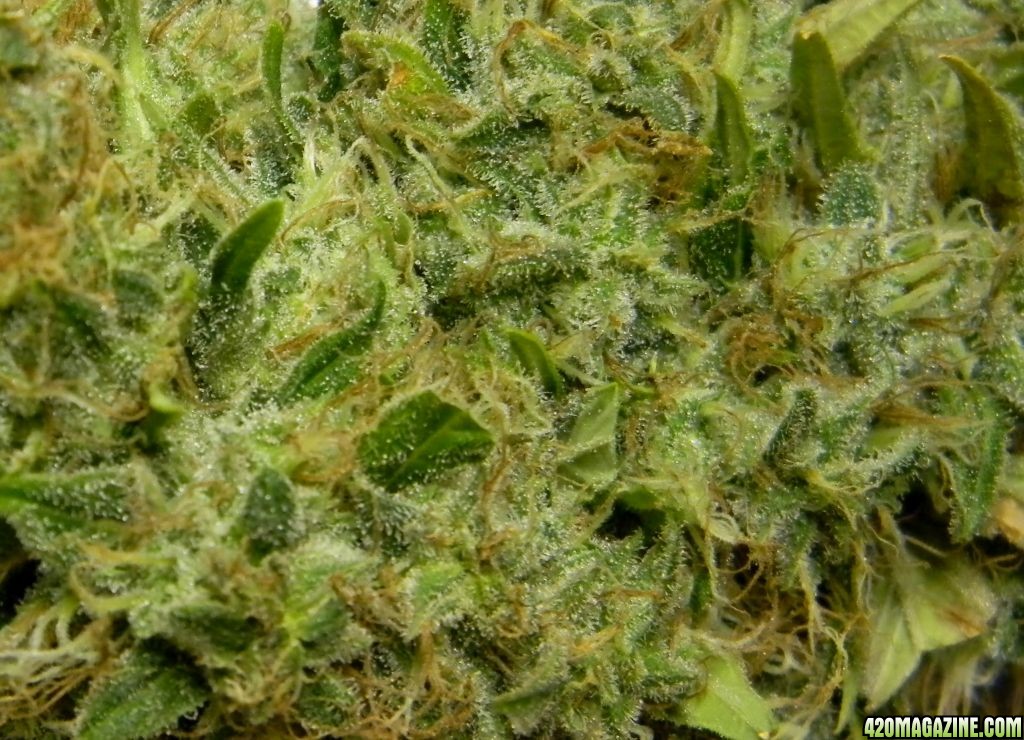 Yep, one more to go; probably this week then I'll post a summary. So far I rate the Quasar first, Warlock second, and the early bud of dish soap weed I smoked made me wonder how the Ultimate strain got on the list. Hope it smokes better at harvest.....

that quasar looks really good.
Use coupon code "420MAGAZINE" for 10% OFF all of our products.
Helping Professional Growers Succeed - Blue Planet Nutrients
blueplanetnutrients@gmail.com

Thanks BPN. Between your Farmer's Pride line of nutes and the in-between molasses additions to the waterings during flowering, they toke like candy. I've only just smoked a naturally dried bud from this grow this morning (the Warlock; tomorrow both colas will be ready for the curing jar). The Quasar still smokes a bit rough, but light ballast drying with no curing does that; it's a price a chimp pays to smoke early.

The Ultimate is starting to smoke a lot more like weed now too. It's almost all foxtails so it will be a little less in weight than I thought. Still the best cola I've grown so far. Slap somebody 'cross the lips with that thing and straighten their hair out.....

Nice!! Told ya that Quasar is a nice addition...Makes a great female breeding plant too...
The Budcave (A man, A shovel, an underground growroom) Lucy, GDP, Wild Thai, Blueberrygum, and more..

GodsTrichome said:
Nice!! Told ya that Quasar is a nice addition...Makes a great female breeding plant too...
Click to expand...

Note : Well the Warlock colas are in the jar, but left open to dry another day or two before I do the cure. The Quasar colas are going into the jars in a few days too. I'm turning the long-stemmed Ultimate cola under the 250 watt MH like a rotissery chicken until more than half the hairs are turned brown, which should be any time

I'll check it with the magnifier again today.

Of my new strains, likely all will ripen more slowly than PE.
I will be sooo impatient. I'll be pissed.

"I'll check it with the magnifier again today." "Are we there yet?"
420 Magazine®
Creating Cannabis Awareness Since 1993

Almost. Another day or two. I think I'm going to go by the % of color change in the hairs, Propa Gator. Every place I look seems to have a different amount of clear and opaque trichomes (like you said once before, information overload). I try to get a side view of the trichomes through the magnifier because if you've ever used one and noticed if you look straight down on them they ALL look opaque. Growth seems to be done, and what few hairs this whoppin' lil' cola has are about 40% shriveled and brown. Still smells like cheap dish soap, but getting more of a citrus to it. Every time I rub my hand on it and smell my fingers for some reason I think, "You know you're soaking in it, Madge....."

I'll have it burnt, inhaled and exhaled in a matter of days.

The smell of Rotisserie Buds is something to draw the crowds in...

This Farmer is beaming with Pride. Soon this Farmer's eyes will be very very red from..... well, not Pride. 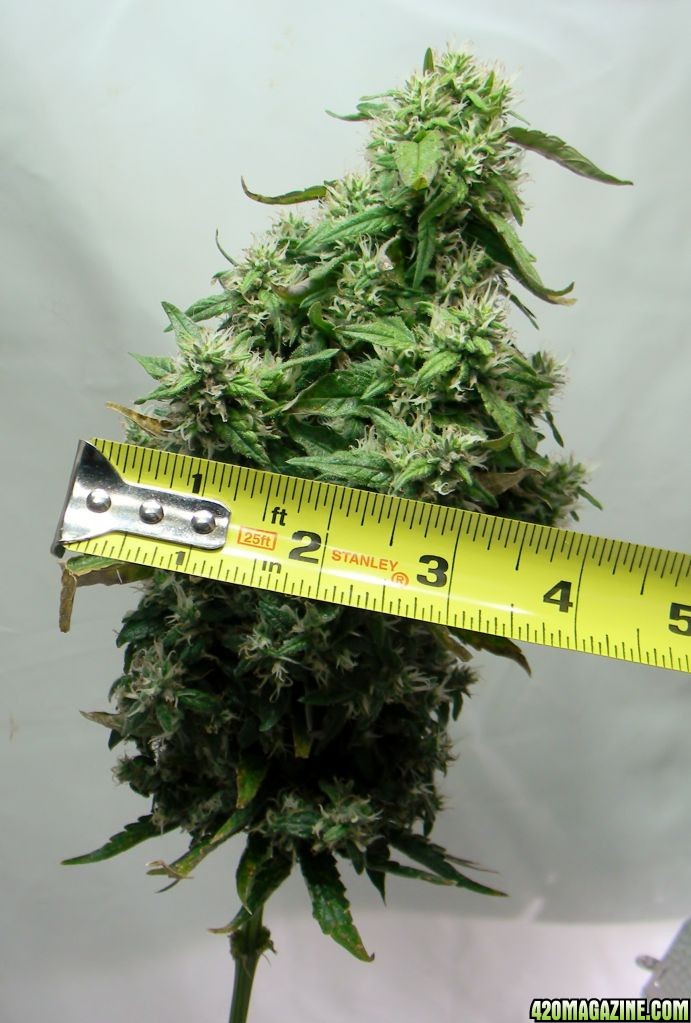 I'll take a wide side pic after I chop and trim. Ima let it go still and watch the hair color.

Well after a check with the infoverload-o-matic (a.k.a. magnifier) I'm getting a small count of amber trichomes, so I put the Ultimate plant into 0/24 and maybe I'll leave it in the dark for two days before the chop.
I just did a second check with the WeedBGone-o-matic Power System (a.k.a. my lungs and brain) and the readings are telling me that the remaining Quasar and Warlock nugs are not going to make it to full cure.....

I think for the info to be more useable to others, I'm going to document my grows at the end. A total count of the whole grow with seed to chop times, 12/12 light change to chop time, wet weight compared to dry weight, # of times fed and amount in gallons, etc.
I hate to say it, but if these are the strongest strains out there it looks like I'm going to have to move to concentrates or isomerization.

What's left of the Ultimate cola : 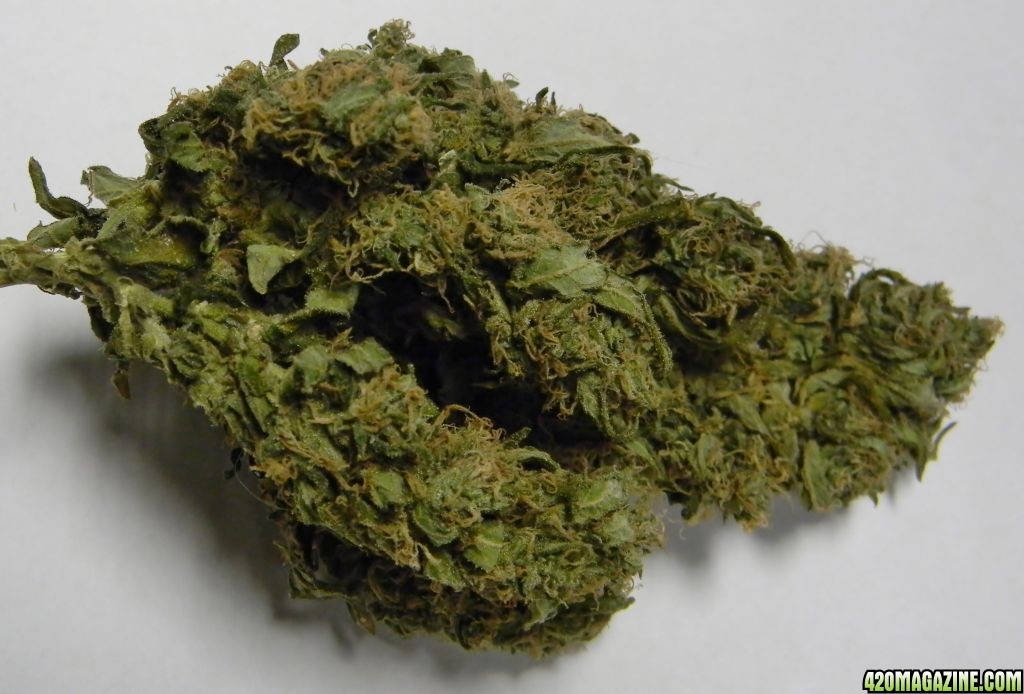 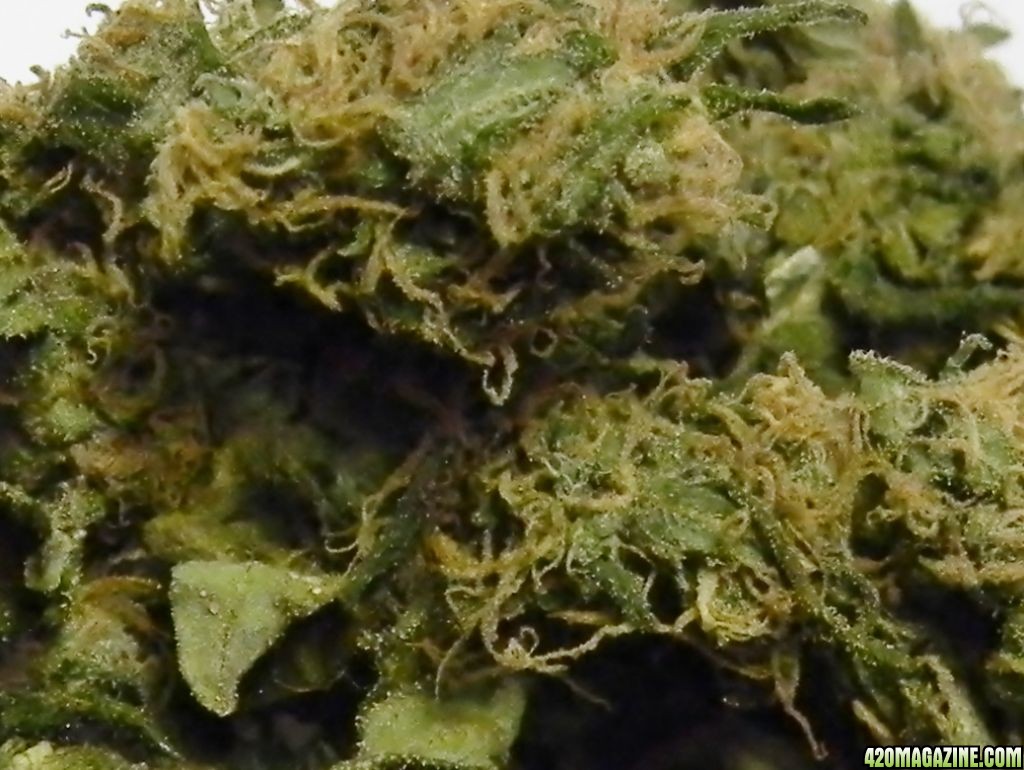 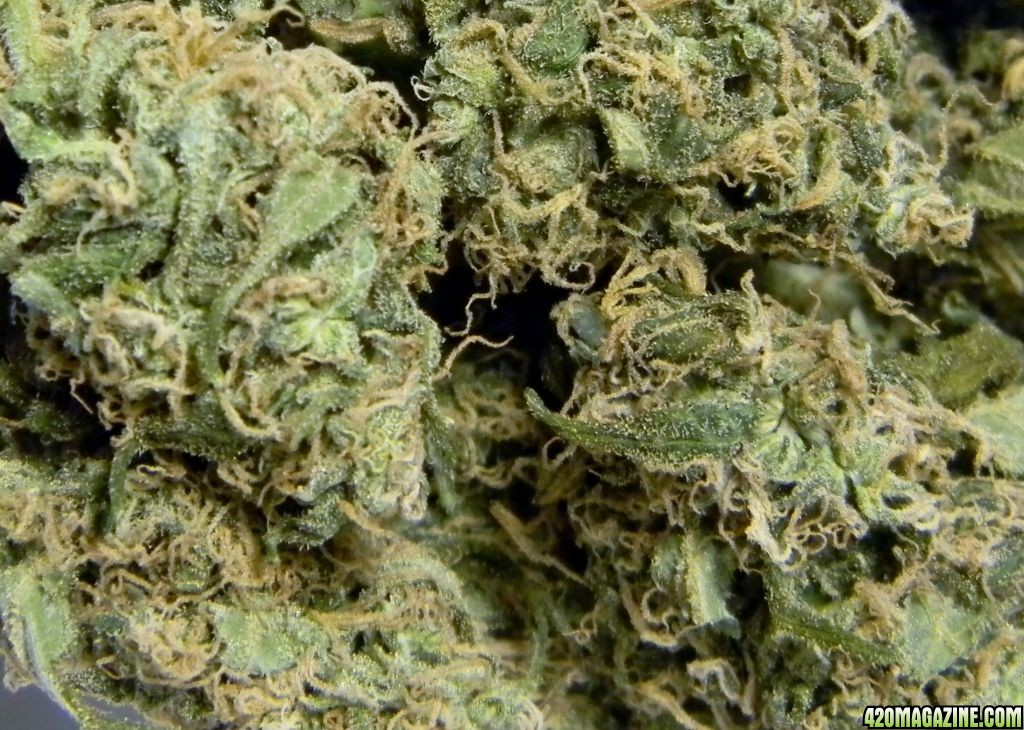 I'll summarize this grow later when I have a little more time to gather my thoughts and information.

Looks so tasty!
Help when and where you can. Happy growing, Mark Green
What I am doing now: Perpetual Multi-Strain 2 Liter SOG + BPN Grow Journal

Well, I just smoked the last joint of that Ultimate cola. The Quasar and Warlock have been gone for days. The Grandaddy Purple grow is over two weeks to chop, and another week or two to dry so life's gonna suck for a while in about fifteen minutes or so. Oh well the lungs get another unwanted break for a month.....

In summary the heat problems I had from increasing my lighting but not increasing airflow caused stretch, and with only an initial topping of all plants, no branch training, and working with Sativa dominant strains height quickly became a problem. The plants grew out of the useable zone of light and everything underneath the canopy grew too weak to justify leaving on. Then afterwards the tops of the plants grew into the unsafe zone too close to the light, and I ran out of top room to adjust for it. I probably wound up with about 4 or 5 oz., not a very respectable yield for 500 watts of light. Sucks.
The reason I called this my power grow was because of a thread on this website called "The Strongest". These were all named a few times, and just like all noobs I have the same question. Unfortunately I still do. Don't get me wrong, I got high from all of them and I particularly liked the Quasar. In my opinion they all stand a head above the average strains I've grown so far. But if we're going to talk strongest, all three of these need to grow some hair on their a$$ before they stand in that lineup.

And another for the completed journals.
Hey hey hey PotChimp say,

You need a 1k for veg and 3 1k for flower...then you'll have enough smoke for a month!

2 weeks goes by in a flash

Thanks for sharing your grow with us!

Don't forget to head over to the 420 Strain Reviews forum and post your smoke report there too!

I’m moving this to completed journals.

Love and respect from all of us here at 420 Magazine!