I'm finally getting around to posting a journal, but my ladies have been above ground for over a week now. A lot has happened in that week, but I'll get to that in a minute.

I want to make this journal as easy-to-follow as possible. I read a lot of journals before starting this one, and I appreciated the ones that explained everything the grower did. I will try to do that, too.

My set-up is fairly minimal, but I think it's well-engineered for my purposes. I started with an old dresser that my girlfriend was going to throw out. I removed all of the drawers and converted the bottom into tool storage space. The cabinet and upper drawer portions give me a total grow area of 26" x 14" x 26". Not much vertical space, so I'm going to try to keep my ladies short and stout.

I call this my Growdrobe, and I rolled it into a back closet (4' x 6') that I can moderate humidity, temperature, and light in. 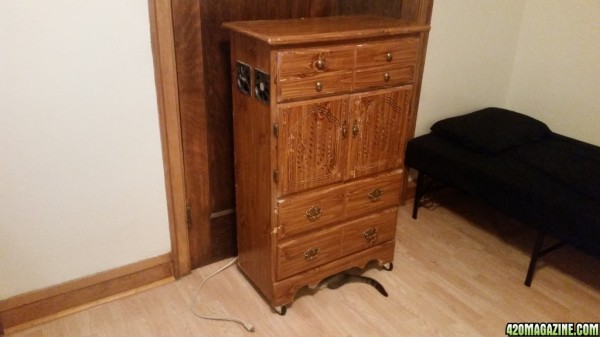 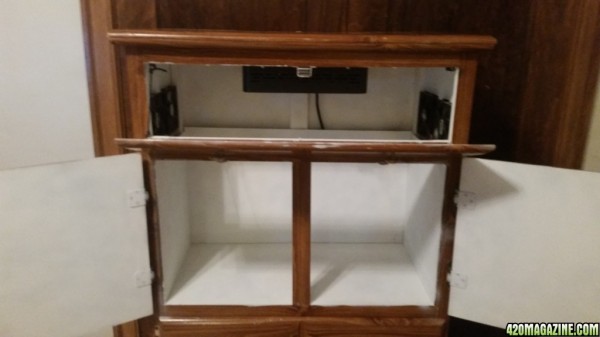 Those are four 120mm computer case fans wired into a controller in the tool storage area. Three fans draw air in, and one pushes air through an attached dryer hose into a homemade activated carbon filter. I'll show the parts to that in another post.

Here is a shot of the filter assembly before I added the carbon between the inner and outer filter elements. 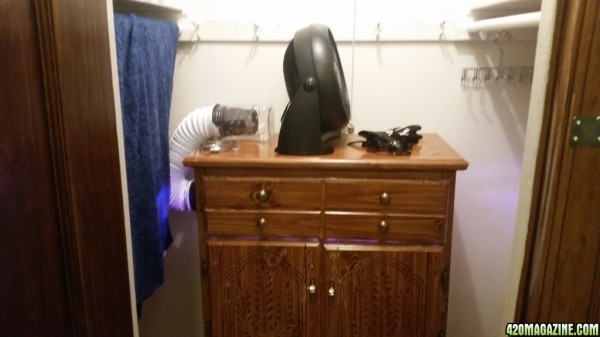 The light is a 300W LED from a manufacturer that I will not name, in accordance with the forum rules. So far I love the light, but ask me again in 3 months after I (hopefully) harvest. 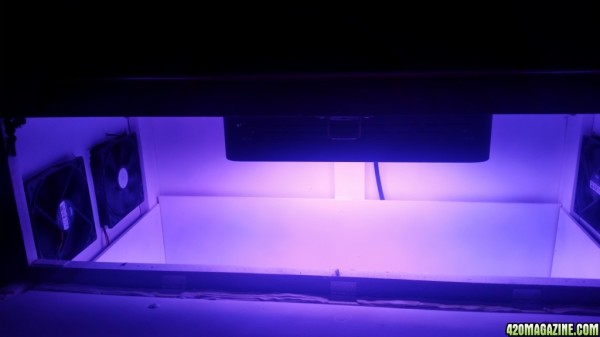 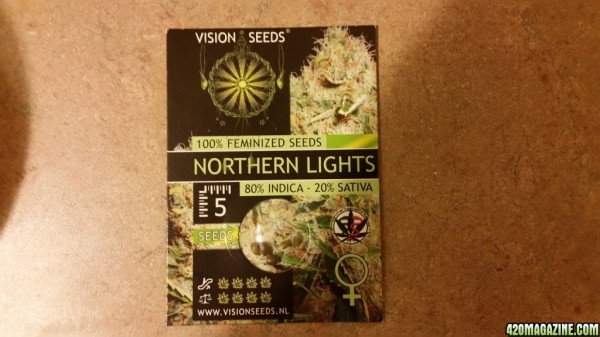 I put two of my four seeds in a bowl of water in a cabinet for twelve hours and then planted them in about a half an inch into top soil. I planned to leave them in these topsoil-only buckets for two weeks or more, but that didn't happen. More on that in a minute. 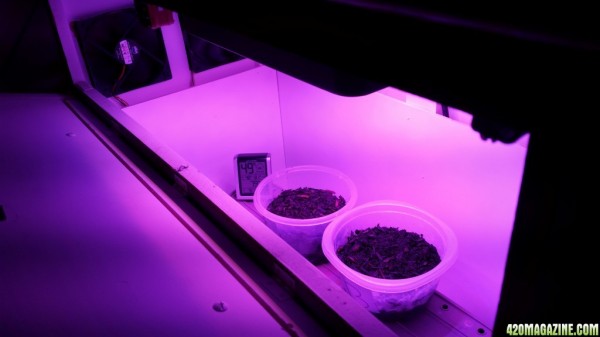 Call me superstitious, but I won't name a plant before it has broken through the surface. So for now, the buckets are labelled "A" and "B".

After three days, "B" decided to show herself, so I named her Brandy. Twelve hours later, Angie also popped up. 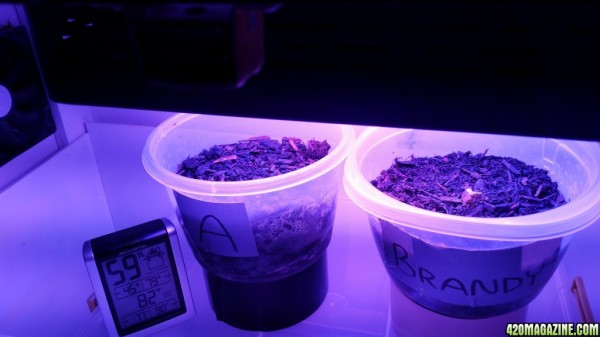 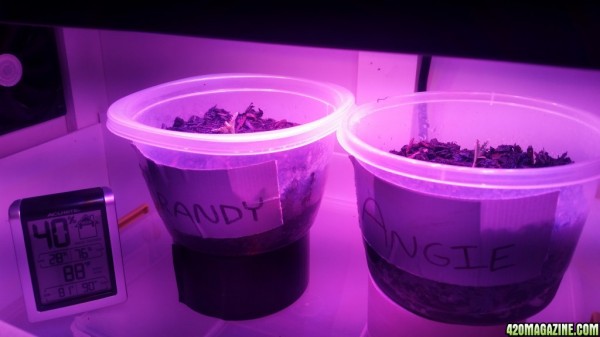 I haven't quite figured out the right white balance setting on my camera yet, so my apologies for the sometimes-pink, sometimes-blue pictures.

This was going well, but got a little carried away with the light. I tried the "more light is always better" approach and boosted my little seedlings to within 3 inches of the LED. Brandy's leaves curled up and showed obvious signs of LED burn. Oops. I moved them back to 20" from the light, and they both seem to be opening back up. I will leave them there until they are a little more established.

I figured that one traumatic experience per plant was enough, so while they were already stressed I transplanted them into their permanent garden planter with humus, peat moss, and manure soil. The ladies seem to like their new digs, but time will tell if they thrive. 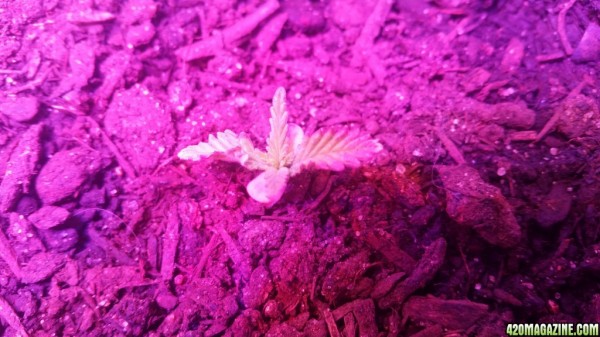 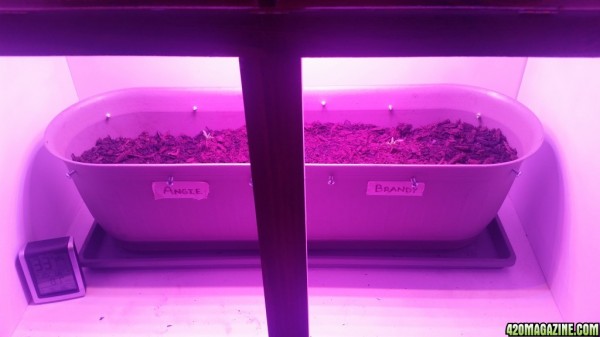 I have been battling dry weather since the start. I have a 2-gallon humidifier running at all times and a wet bath towel hung up to keep relative humidity above 35-40%. Not mention how thirsty the ladies are. I had to water them every day in the starter pots, but I'm hoping the planter and new soil retain more moisture.

I seem to be fighting a pest problem, too. I can't seem to keep this pest out of my grow room. Any suggestions? 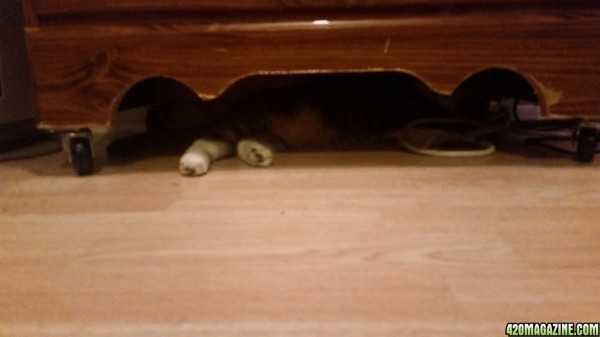 That's it for now. Thanks for reading, and feel free to throw in advice or observations!

-Rumples
â€œWrong does not cease to be wrong because the majority share in it.â€ ― Leo Tolstoy

It has been exactly three weeks since the ladies sprouted and I was beginning to worry. They haven't gained any height since I hastily transplanted them, and Brandy's biggest leaves are discolored. Then I noticed some new leaves just beginning to sprout out of both of the ladies. I guess they were just spending some energy growing their roots into the new soil. I also must admit that despite my best efforts to restrain myself, I was probably over-watering. 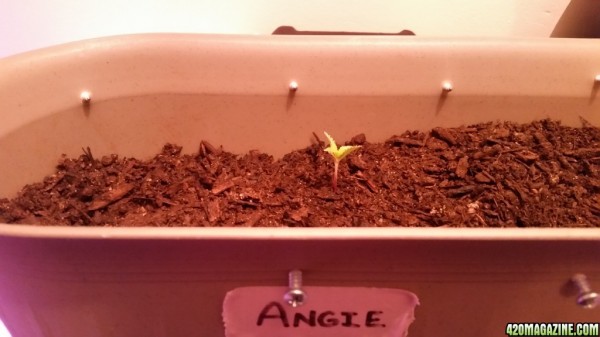 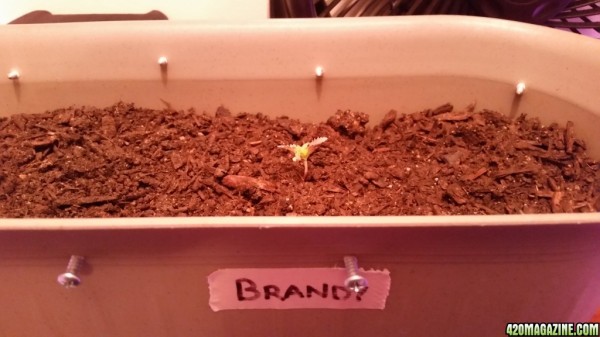 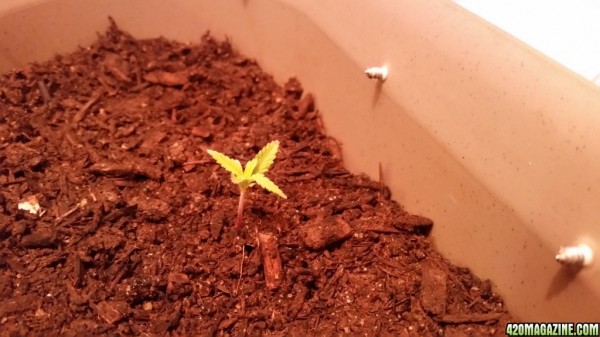 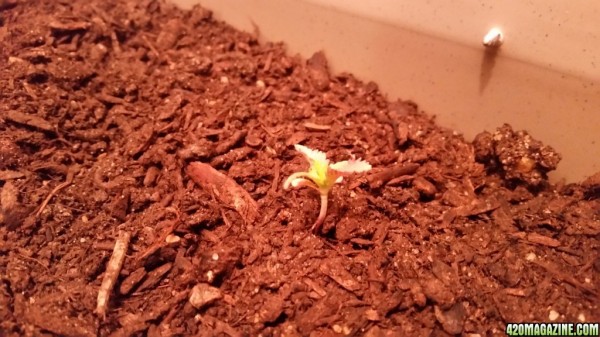 Speaking of new, I started them on one tablespoon of nutrient solution per gallon of water. I am using Fox Farms Big Bloom for now, but will add Fox Farms Tiger Bloom when we switch to the flower light cycle.

Hopefully these little ladies adapt to their new soil and nutes and start growing again. I'd hate to fail so spectacularly with all the effort I already have in.

Nice set up, I'm subbed in

nightsmokerG said:
Good luck my friend,subbed in.
Click to expand...

I got back this evening and one of Brandy's first leaves is brown and shrivelled. Angie's starting to show the purple leaf LED burn, too. I guess this 300W is just too much for them at such a young age. I will be looking into some CFL lights later today for seedlings. I just keep finding places to throw money at them!

I haven't mentioned this before, but I have the ladies on an 18 hours on, 6 hours off light schedule for vegetative growth. I'll switch to a 12/12 cycle for flowering, if that day ever comes.

nightsmokerG said:
move them furtherdown.This will fix your problem .Find the sweet spot...
Click to expand...

I wish I could, but I'm out of vertical space. The LED is as high as it will go.

So I took it out. For now, at least. I decided to raise the ladies on 300W CFL until I see fan leaves.

Here are some pictures from today: 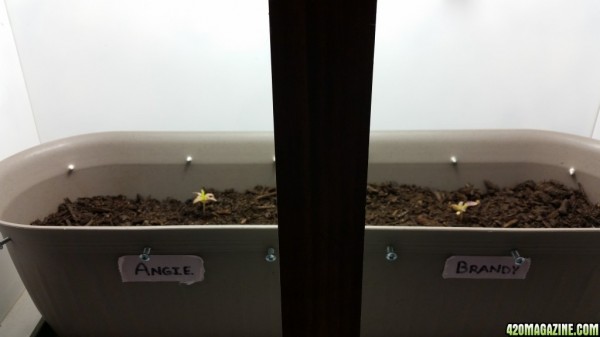 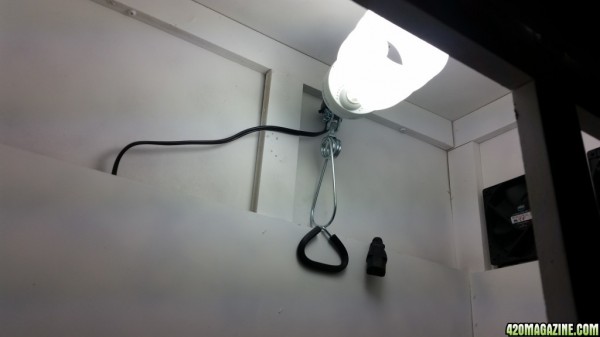 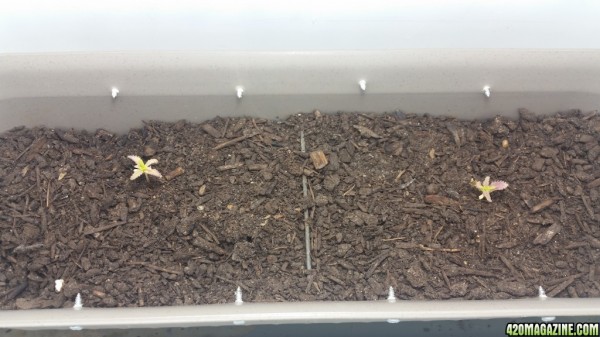 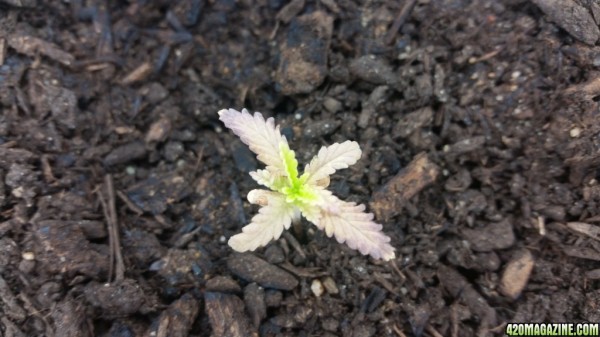 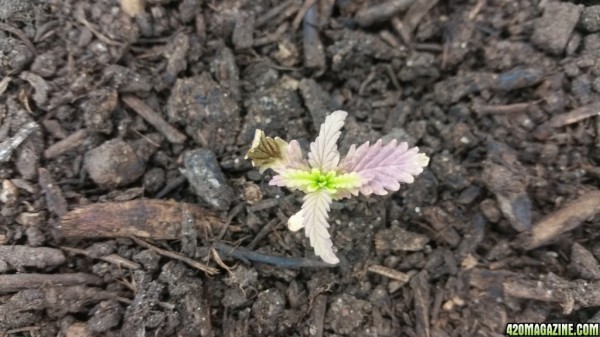 You can see how both have purple leaves from the LED burn, but you can also see the new green growth on the tops. I think Brandy's brown leaf is even perking back up under the CFL. Overall I'm happy that their growth looks to be back on track. It's been a rough first few weeks of life, but I think they're stronger for it.


“Your first 10,000 photographs are your worst.”
― Henri Cartier-Bresson

Ey man nice setup im now finishing up my grow. And am building a new multi chamber box. After its set up i will start with the same kind of NL seeds from vison seeds im subbed

What Are The Actual Dimensions Of Ut Grow Space? Just Curious As I Will Be Constructing A Stealh Grow Box Complete With Carbon Scrubbers And Would Like To Go With Led But Will Be Using Cfls To Start with
Stealth grow box and helpful info

Rampl let them dry a bit and then flash em,flashem hard.Put em to their place and leave them alone till you need to water once they dry again without nutes.Best of luck.I would germinate one more seed in case.
My ist Grow LED.10 week flower.CURRENThttps://www.420magazine.com/forums/journals-progress/260592-nightsmokerg-s-first-grow.html

Sypherz said:
What Are The Actual Dimensions Of Ut Grow Space? Just Curious As I Will Be Constructing A Stealh Grow Box Complete With Carbon Scrubbers And Would Like To Go With Led But Will Be Using Cfls To Start with
Click to expand...

Originally 26" length x 14" width x 26" height, but I just dropped the bottom out of it and added another 24" in height to get them away from the light some more. In hindsight, I should have gotten a smaller CFL to start them from seeds. This 300W is still too much light for them.

Thanks! I'll take some pictures of my filter in a bit, but I pretty much did followed this Youtube video.


nightsmokerG said:
Rampl let them dry a bit and then flash em,flashem hard.Put em to their place and leave them alone till you need to water once they dry again without nutes.Best of luck.I would germinate one more seed in case.
Click to expand...

You are so right and I should have seen this sooner. I murdered Angie. I murdered her with nutes.

I got back from a week-long business trip--right in time to water--and Angie was shriveled up and brown. Dead.

I know my mistakes now. I started with poor soil and too much light. I made the LED burn situation worse by transplanting while they were trying to heal. Even worse, I over-corrected for the poor soil by starting the nutrients too soon.

At this point, I'm just trying to keep Brandy alive to see if I can. I'm not expecting much. Maybe this is for the best, though, because I still hadn't figured out what I was going to do with the ladies while I'm out of town for two weeks in December.

I will be germinating another two seeds in January when I get home. They will be in individual pots in real growing soil, probably Fox Farms Happy Frog. They will get absolutely no nutes until I see a second node. Everything else I think I will keep the same. I have high hopes for my next attempt.

Colorado High, can I keep this thread open until then? I haven't abandoned it, I just want to continue my rightful first grow in January. Y'know, not this practice round.

â€œWrong does not cease to be wrong because the majority share in it.â€ ― Leo Tolstoy

At this point, I'm just trying to keep Brandy alive to see if I can. I'm not expecting much.

AttaBoy!:31:
You can learn alot by almost killing a plant and keeping her alive.
+reps for not giving it up, just because.
DankWolfs First: Mystre Bagseed #3 Flowering
Dragons Breath, Afghan Kush and the start of perpetual-in Veg. (Current)
~~~
The Bizzare and Obscure Wolf Den.(Current)
~~~
* New GiveAway! Gorilla Seeds! *​

David Bowman said:
Hope all is well in your world.

Angie and Brandy died. I nuted them to death after starting them in awful soil.

I think I'll start a new thread for the ladies I just planted, who are already bigger than the first two ever got.

~Rumples
â€œWrong does not cease to be wrong because the majority share in it.â€ ― Leo Tolstoy