Hello again 420 forum readers, its been a while but Im back with my 3rd grow. This is my first time running DWC and its been quite the learning experience to say the least! I purchased 3 seeds from CANUCK seeds, only one of 2 seeds germinated and I believe that was around december 17th. Shortly after I had a light tip over and burn off 7 out of 10 of her leaves! Since I only had one seed left I figured id try to salvage this grow.

A few days later she had rebounded. I was planning on topping anyway, just not this early.

After that point she seemed to stop growing. I thought it was my nutrients but it turned out to be slime on the roots. After washing the roots off and adding growzyme she started growing again. 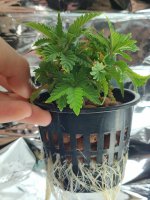 Fast forward to Jan 17th after some low stress training. I didnt realize just how much light was getting through my lid leading to a lot of algae and root rot during this time. I had just done a water change and tried to clean off my roots.
The plants in the background were some overgrow Canada seed i had laying around, so i had thrown them in some dirt and grew them off the ambient light in my growbox. 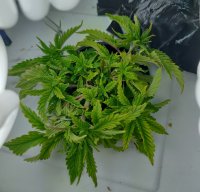 2 days later she was looking a lot better. 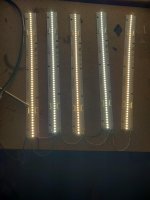 Jan.25th with a little bit of burn marks from nutes 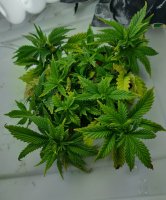 Today, Feb.1st. Added cardboard over my lid to heep the light out. 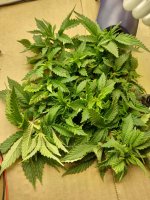 As you can see shes pushed right up against the cardboard so im going to raise the net put up about an inch for better airflow.
Any advice on when to start flowering?? Shes about 6 inches by 8 inches across and cant get too tall because those leds will burn. Also there are a crazy amount of nodes currently blocked by the top of the canopy, would it hurt to defoliate at this point or should i just wait till right before I flip to 12/12? 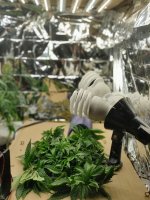 thanks! I wasnt going to let her die after spending $75 on seeds with just one more remaining xD
Critical Widow Cabinet SCROG DWC 2019
H

Raised the netpot up about an inch and a bit and removed about half a cup worth of leaves. 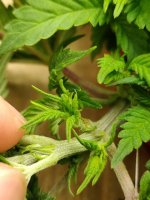 Amadeus Forzin said:
Hope all is well in your world.

Little update- she's about 16 days into flowering, little concerned about how little hairs she's got as I've seen other grows where at this point it looks like they've got actual bud forming, but hopefully shell pick up the pace soon. She basically doubled in size 48 hours after I flipped to 12/12. I haven't done much defoliating and all the stems under the net are still there. Currently contemplating doing a hardcore defoliating at week 3 but I'm not sure. Removed about half of cups worth of leaves today that were covering bud sites underneath them.
Here's some pics!

Just trimmed up about 11 stems that were under my canopy. Dipped them in rooting hormones and then into rockwool cubes that were soaking in GH floarnova one part grow@1/2 tsp per gallon and growzyme @1/2 tsp @5.5ph for 30 minutes. Going to add another net soon as some stems are getting real close to the light.

Going to put a layer of cellophane over the red solo cups and let them sit under 6x23watt CFLs.

Another picture of my girl. I guess this would be around day 40 of flowering. Apparently my lights weren't running at full power for at least a couple weeks. I'm only running 65 watts so it looks like that did some major damage to my final yeilds. The buds dont seem to be growing much at all. Maybe it's because 65 watts isn't enough for all the bud sites. Or maybe the lights are just too close. Only a few buds and leaves have been burnt and that's only when they have been directly touching the lights.
Noticed a bit of rusting on some leaves so I added in 2 tsp of Epsom salts when I topped her up.

They are very sticky and my fingers smell amazing after tucking the branches.

Should I be removing a significant amount of fan leaves that are blocking off the lower section of my scrog? Or would that just stress her out this far into the grow?

All the clones rooted except one rooted. The last one seemed to develop a fuzzy mold on the stem and shrivelled up.
Another clone might not make it, all its fan leaves fell off before this single root sprouted. I'm not giving up on her though.
I'm not sure but it looks like one has turned herm from the stress. 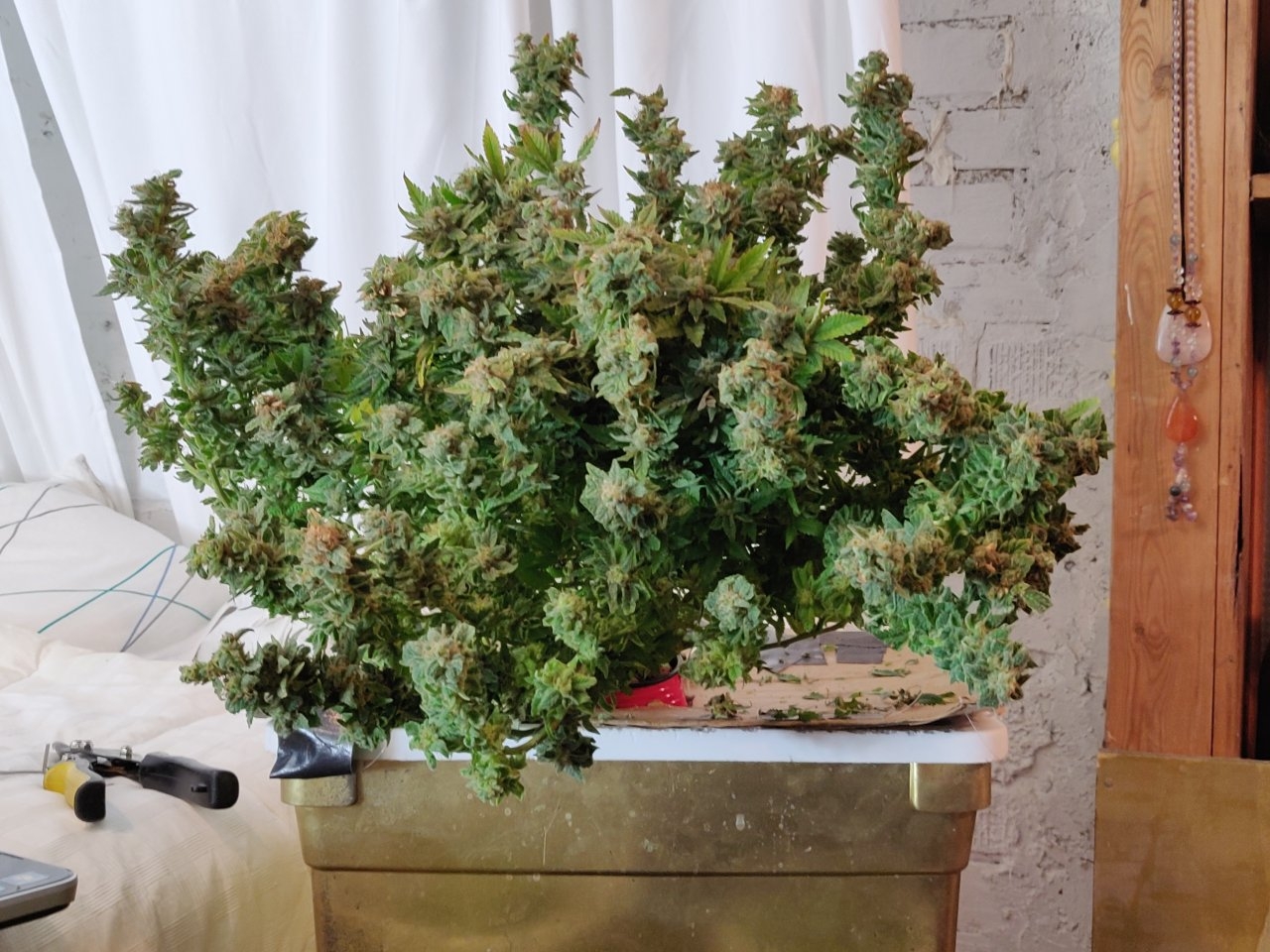 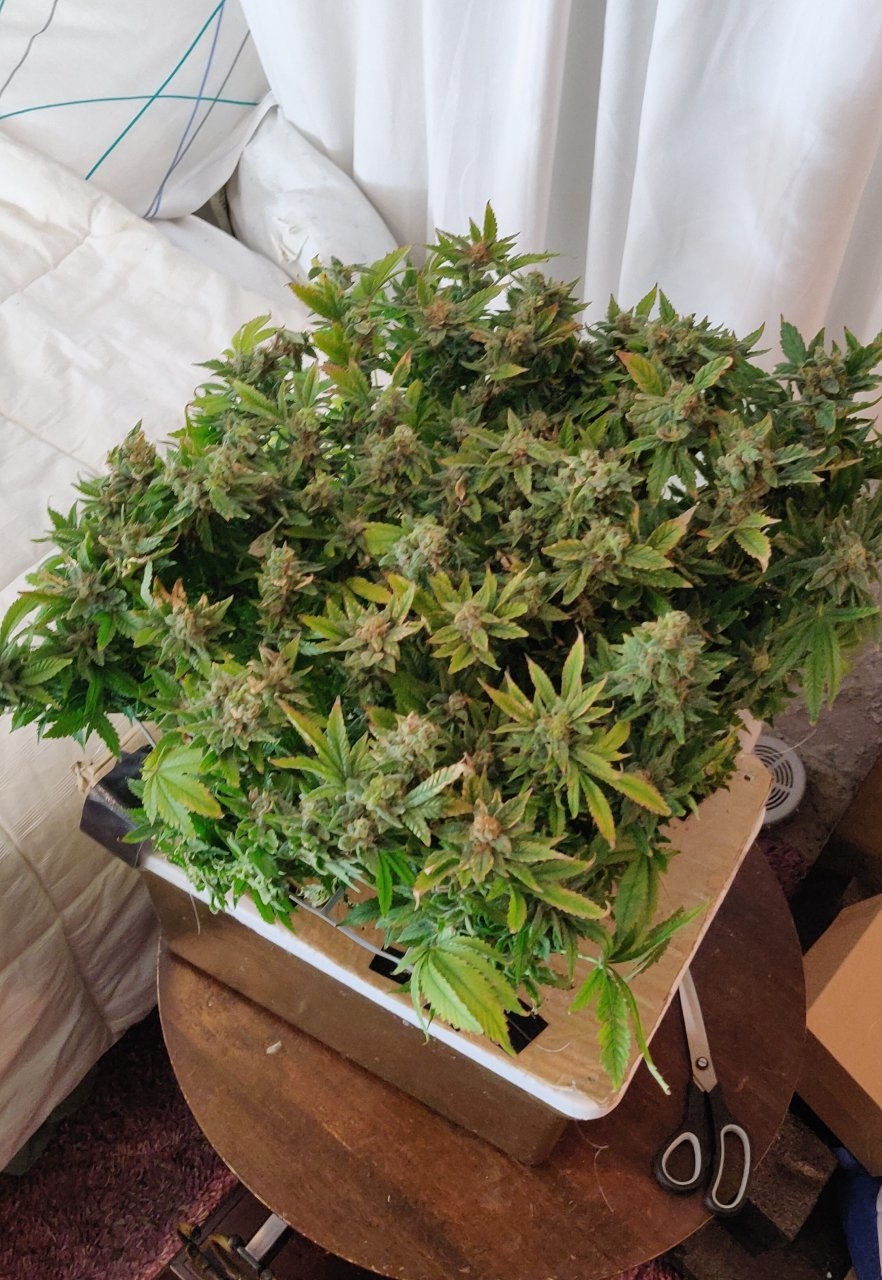 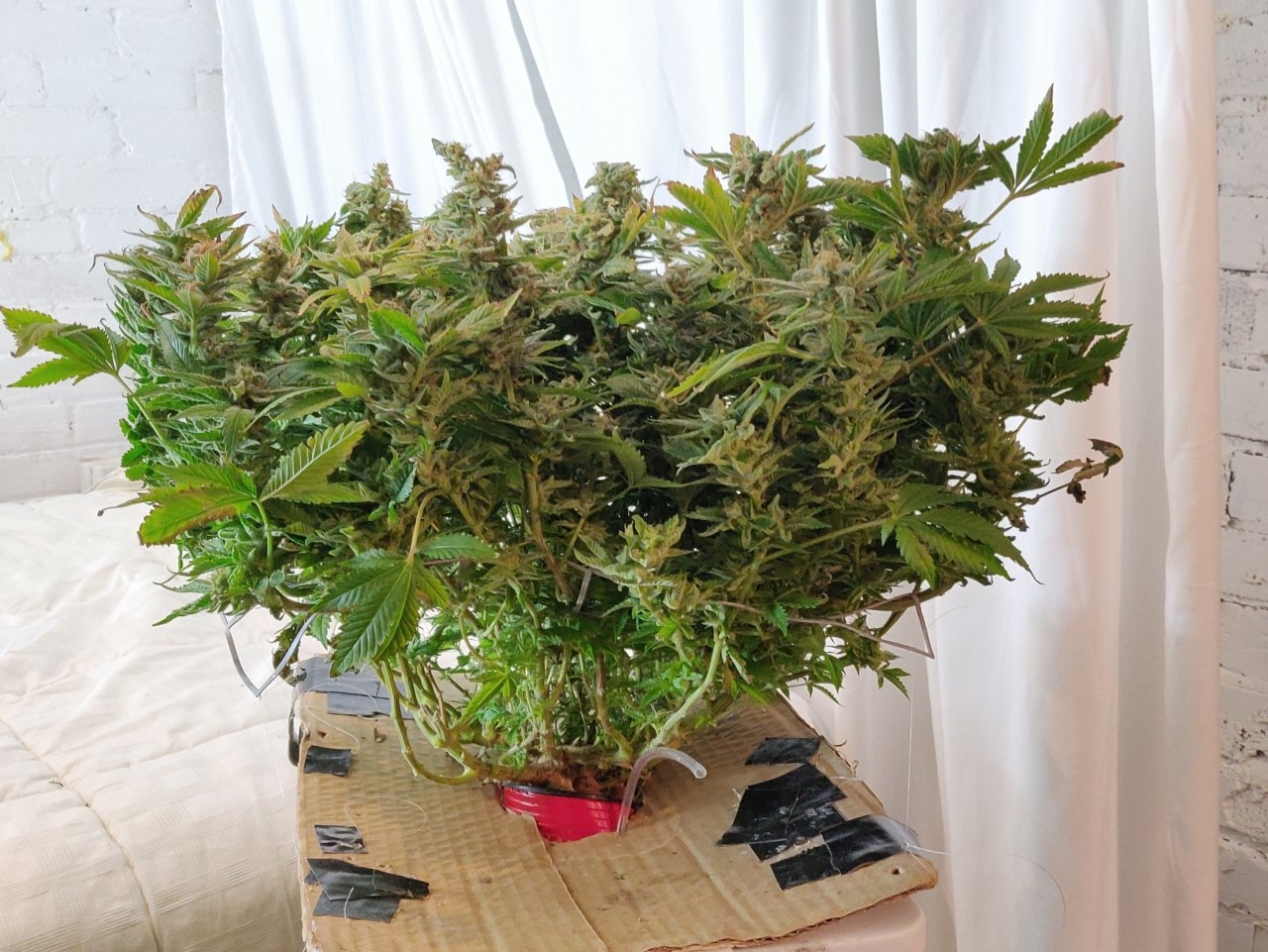 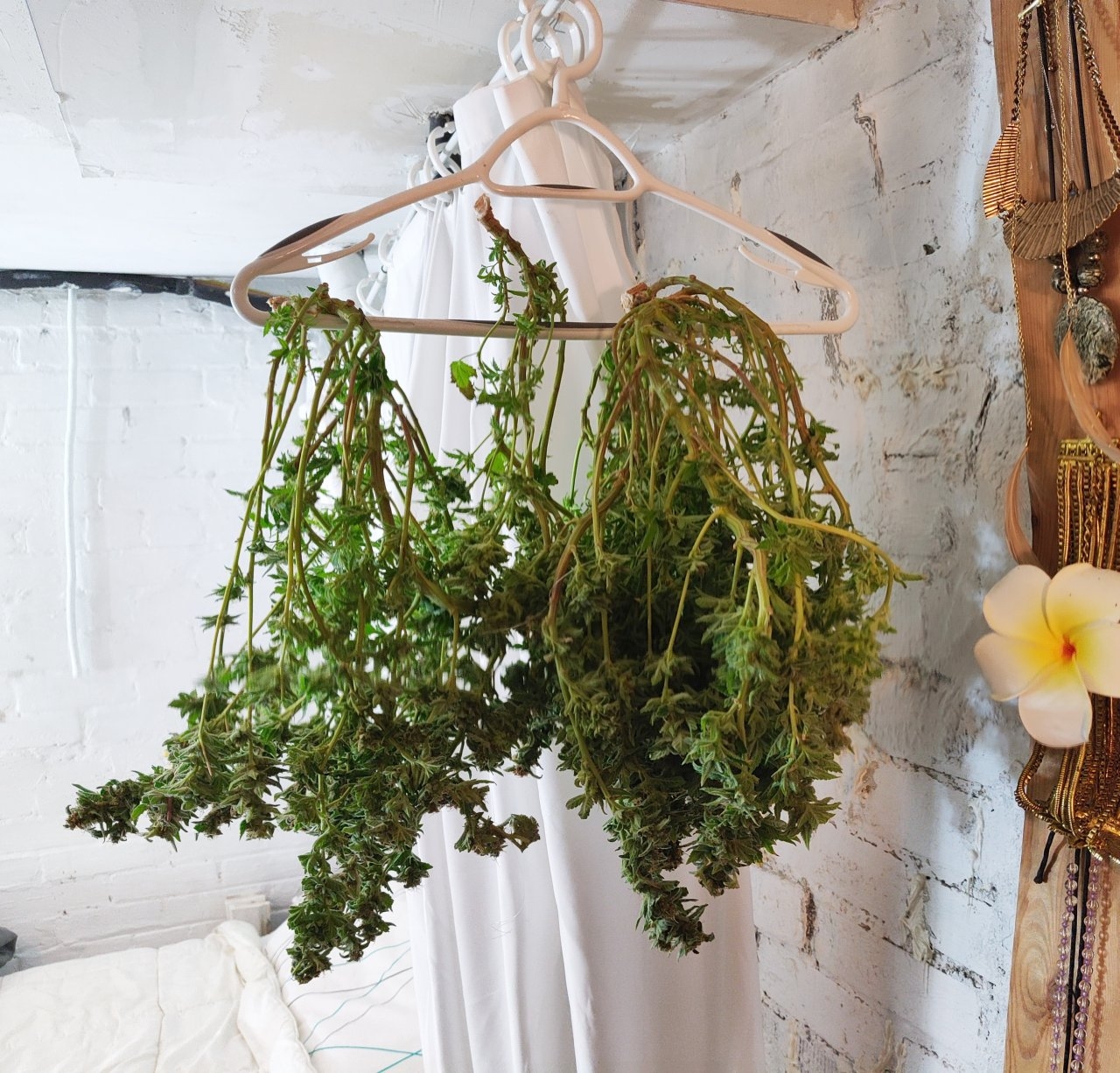