So I've been seeing lots of articles and people talking about drying and curing weed. Seen methods that take months, seen methods to microwave a fresh cut bud so it can be smoked.

Anyways, anyone got a back yard smoker and want to try drying buds over it??

Maybe it works. Have some hickory/applewood smoked dank LOL

I don't have a smoker or fresh buds to try it out with myself.

Let me know what happens if you try it out! Post some pics!

:rasta::rasta: I may have to try to do some. Love smoking meat and smoking bud soooooo..... Y not....lol
Reddog 1981 First Time Northern Lights Grow
F

Ive heard of people putting buds in jack daniels,they do it with cigars too

Interesting idea! I think you would have to worry about how quickly your buds are dried out.


On another note, I have a friend that smokes anything he can think of. He smoked a bag of flour once (Spread out on a baking pan) and then made chocolate chip cookies with it.... They were AMAZING!!! The Sweetness and Chocolate with the Smoked flavor were a perfect combination!
My 1st Grow Journal is In Progress
>>> Mystery Strain - Indoor - Soil Coco - T5 - 2016 <<<

The over drying is one thing to consider, but I also wonder if the temperatures would be high enough to degrade the THC.

It would be an interesting idea to test out.

I have to agree with TheFertilizer that the smokey flavor might not taste that good in a jay or bowl.

It would taste better if you could add some form of bud to smoked chicken or tri-tip.
Flying High on Hoops​

I'll be smoking another batch of salmon in a couple days so I'll try this out and do some experimenting. Not that I really want smoky buds, but what the heck - nobody else seem to be biting. I've had smoked flavoured rolling tobacco before that was very good.
The Green Hole - my first journal- completed
The Hexapus's Garden - my second journal -completed
Weasel Forges Ahead -current 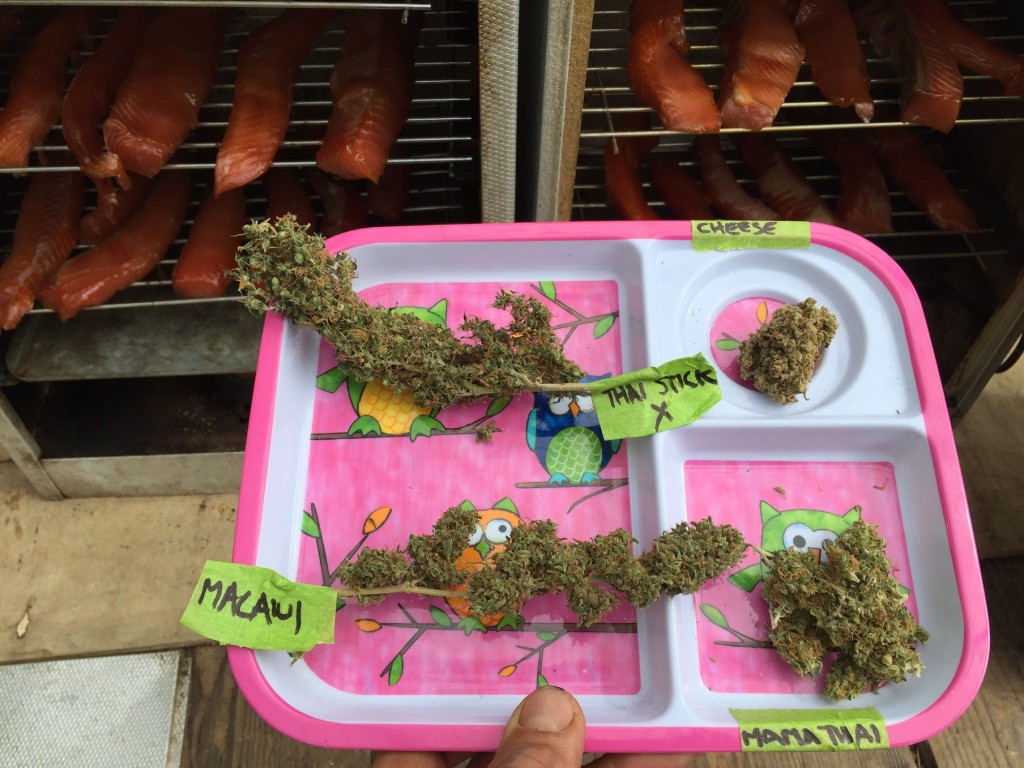 Ok in they go. I'm not going to put a big pile in here because I'm only interested in a few samples. Scraggly buds all...
The Thai Stick cross was harvested a few days ago and is half dry, which might work out well here. The other samples I will probably have to rehydrate afterwards.
I thought the sativa flavours would go well with a little smokiness, and smoked Cheese sounded too good to pass up on so I stuck a little nug of ol Cheesy the POTM winner in.
Malawi and the Cheese are about 4 months cured, Mama Thai has been around about ten months and I'm down to the dregs as you can see.
The Green Hole - my first journal- completed
The Hexapus's Garden - my second journal -completed
Weasel Forges Ahead -current

Nice! I can't wait to see how this turns out!
420 SPONSORS

After two hours of light smoke I can't discern any real smoky taste, but that's not surprising because I'm high as a kite and it's real smoky around here but I will keep on smoking and sampling and report back. Observations to date are - the bud is getting very dry, but definitely still works!

Smoke flavour doesn't stick to all things well- hence the need for brine and honey glazes and such. Also the bud dries out fast as expected . Might be an interesting way to quick-dry green bud. This particular smoker is warm- designed to smoke and cook a thinnish strip of fish in about 8 hours. A cold smoker would be better. But really to I'll have to get it back in a jar and come at it fresh another time to detect the smell better.
Will keep smoking. 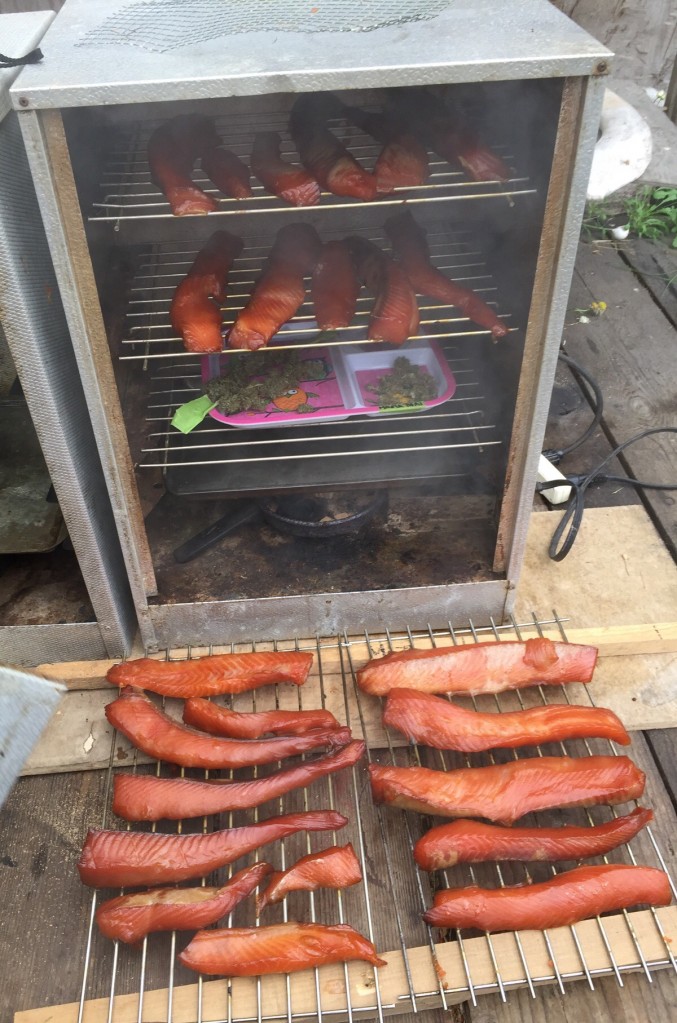 Ok- I have a few thoughts on how this went, and what to do differently next time, and I'm going to take a second try at it in a few days. The bud I smoked yesterday smells sublime.
I'm out of time again and have to run off for a few days. Will be back.
The Green Hole - my first journal- completed
The Hexapus's Garden - my second journal -completed
Weasel Forges Ahead -current

Hahaha... Just thinking outside the box is good enough for me. Love it.

Makes me dream of Masterchef in the future... Duck breast marinated in indica infused oil, smoked over a mind inspiring sativa, and served with frosted greens.

I'll see if I can do another batch tomorrow, and get a picture fwiw. I just haven't had much time. But I've been smoking my way through the smoked buds and liking them quite a lot.
I smoked that particular batch of candied salmon lightly for about four hours, along with the bud. This wasn't enough to really give the herb much smoky flavour and later I remembered a conversation I once had with a local sea-salt maker who sometimes smokes some of their salt for flavour. They said that its not nearly as delicate to smoke as salmon and doesn't pick up the smoke well. This person would smoke their sea-salt heavily for ten hours.
After the fish was out I smoked the bud another two hours quite heavily and this was much more satisfying. Bud took on more of an even light brownish colour and smoky smell.
It seemed like it got fairly hot in the smoker and I was a little worried about overcooking the bud, but apparently that didn't happen since it works well to get me high just as well as it ever did. I thought the heat might have been enough to decarb it. Probably not. Didn't have a thermometer so I'm not sure and I've never decarbed anything before so don't know about that stuff....
It did get completely dried out so I had to put it in a humid container overnight to rehydrate back to good as new.
Because they're all smoky smelling the bud samples smell more similar to each other than they used to. I can't explain the smell but it's a bit like that cooked/burnt brown sugar candy kind of smell. It definitely seems more 'baked' now. More like some sort of food. It's tempting me to eat some of it. It's definitely appealing. I wouldn't want to turn all my bud smoky, but it seems like good stuff.
This was all well cured bud, and it might be my imagination but it seems to smoke smoother now. At any rate it's completely smooth.

- Things I'll do differently next time -

Try to find an oven thermometer around this place.
- Use more smoke - smoke harder and probably faster.
- I might put a pot of water in there and see if it helps keep up the humidity level. Might be easier on the bud, and may possibly allow the smoke to cling to the herb better.
The Green Hole - my first journal- completed
The Hexapus's Garden - my second journal -completed
Weasel Forges Ahead -current

Interesting concept. It's neat to see people try something new & share it.

Tobacco is dried & smoked in barns to cure. So why not try it with cannabis

A
Liter bottle &/or tin foil

A Campus Up In Smoke