I’m relatively new to cultivation of weed. My only previous experience outdoor grow 25 years ago using bag seeds.
I live in Northern California and this grow is for medical use under my Doctor’s referral. I generally don’t smoke weed but generally convert it to a tincture.
What strain is it? Animal Cookies and Platinum OG
Is it Indica, Sativa or Hybrid? What percentages? Indica Dominate
Is it in Veg or Flower stage? Currently in Flower State Day 41 on 9/20/17
If in Veg... For how long? These plants were clones I Veged for 8 weeks
If in Flower stage... For how long? Currently at Day 41 on 9/20/17
Indoor or outdoor? Veg stage was outdoor then moved Indoor for Flower Stage
Soil or Hydro? Animal Cookie (DWC) and Platinum OG (Soil)
If soil... what is in your mix? SuperSoil
If soil... What size pot? 3 Gallon
If Hydro.. What Size Pot 5 Gallon
Size of light? 600W LED Grow Light KINGBO Dual Optical Lens-Series Full Spectrum
Is it aircooled? Yes
Temp of Room/cab? 65 - 80
RH of Room/cab? 55%
PH of media or res? 6.5
Any Pests ? Yes - Earwigs and Moths
How often are you watering? DWC about daily top up Soil
Type and strength of ferts used? Advanced Nutrition – Grow, Micro & Bloom, B-52, Bud Candy keep at about 1,000 ppm
Type Tent? IPower 36x36x72

I would like to start this journal to Thank all the contributors on 420Magazine for their great journals. I have learned so much by reading and reading and reading. I have relied on others advise and am constantly comparing my plants at different stages to photos from others.

I began my first grow with a visit to one of my local dispensary on June 14, 2017. On entering the room I saw some beautiful clones in Rockwell cubes and out of the blue decided to buy a couple. The budmaster was really helpful in deciding which to buy. We selected two Indica dominate - Animal Cookies and Platinum OG

Animal Cookies is the child of the legendary hybrid marijuana strains Girl Scout Cookies and Fire OG. This clone-only strain flowers in 9-10 weeks, and grows into dense, frosty green buds tipped with purple. True to its name, Animal Cookies has a sweet, sour aroma with heavy full-body effects that will impress any veteran consumer. This potent medicine might be overkill for mild symptoms, but its ability to obliterate severe pain and insomnia is unprecedented.

Platinum OG is just as precious as the metal it’s named after. With a THC content regularly topping 20%, this indica-dominant hybrid asserts itself as one of the “heaviest” strains around. Platinum OG is purported to stem from three strains: Master Kush, OG Kush, and a third unknown parent. Flowers are lime green and plump, with prominent orange hairs and a platinum coating thanks to the abundance of THC crystals. A brief, heady onset settles into a powerful physical sedation suitable for nighttime use and pain, stress, or anxiety relief, making this precious strain a robust healer.

As you will learn, I can be rather impulsive. I purchased these plants on an impulse buy and really hadn't prepared for their home coming. Initially I just set the cubes on a plate in front of a sliding glass door until I could acquire what they needed. I had decided I would grow one in soil and one in DWC. a 5 Gallon Buddy Air Pot was what I chose for my DWC and I selected Advance Nutrients 3part mix as my nutes. All my supplies arrived within a week and I started my grow by transplanting Animal Cookies in the Buddy Air Pot and put the Platinum OG into a 3 Gallon pot with Miracle Grow Potting Mix (It was the only thing I had around the house). I put them outside in a nice sunny location.
Completed - Troy's 2nd - Autos - DP Ultimate & Euphoria, Meph Alien v Tangle, RQS Diesel
Troy's - Freezer JuJu Tincture -
Auto Drip Irrigation for CoCo
Completed Troy's First Grow - Animal Cookies & Platinum OG Clones - DWC & Soil - 2017 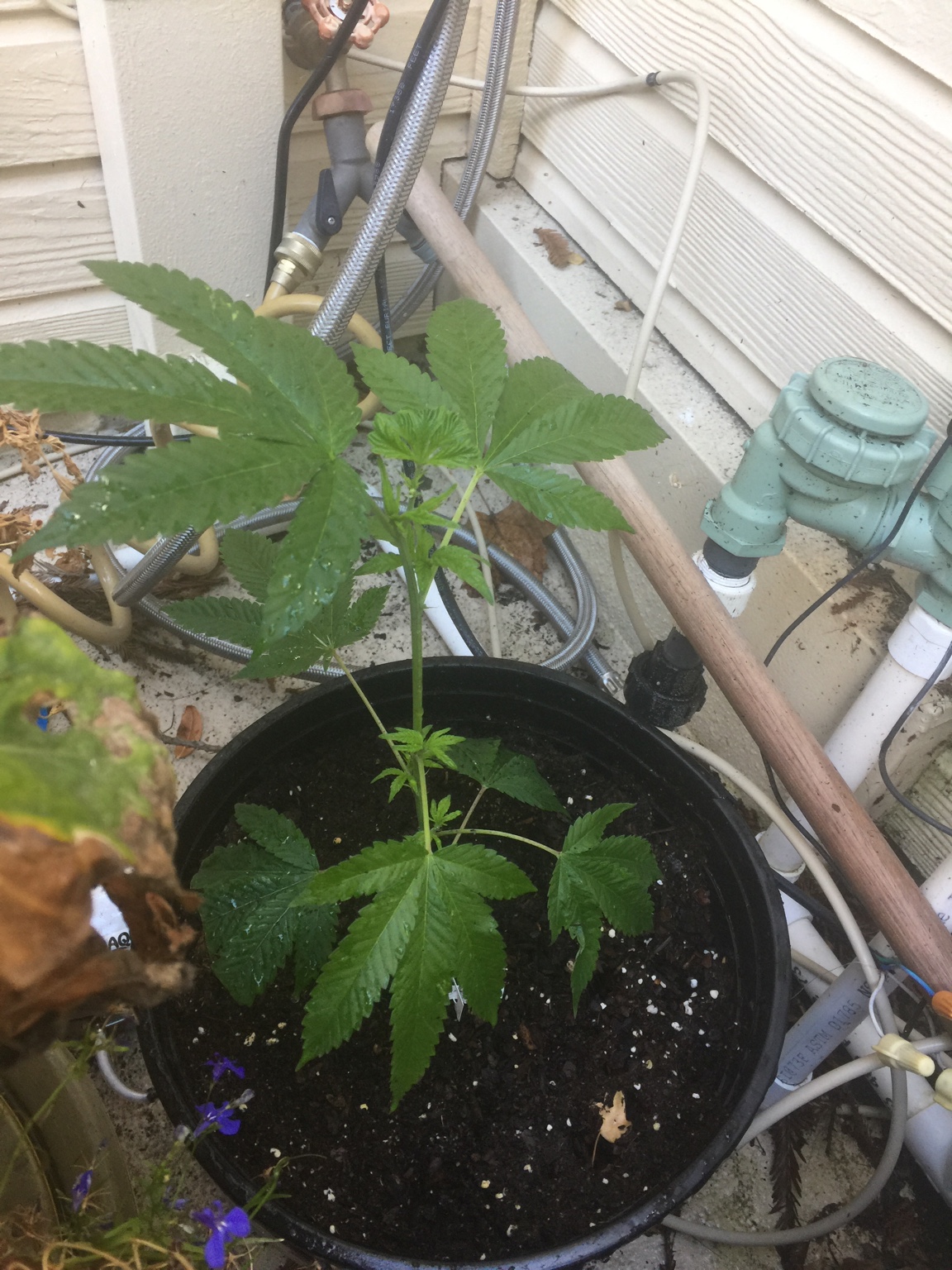 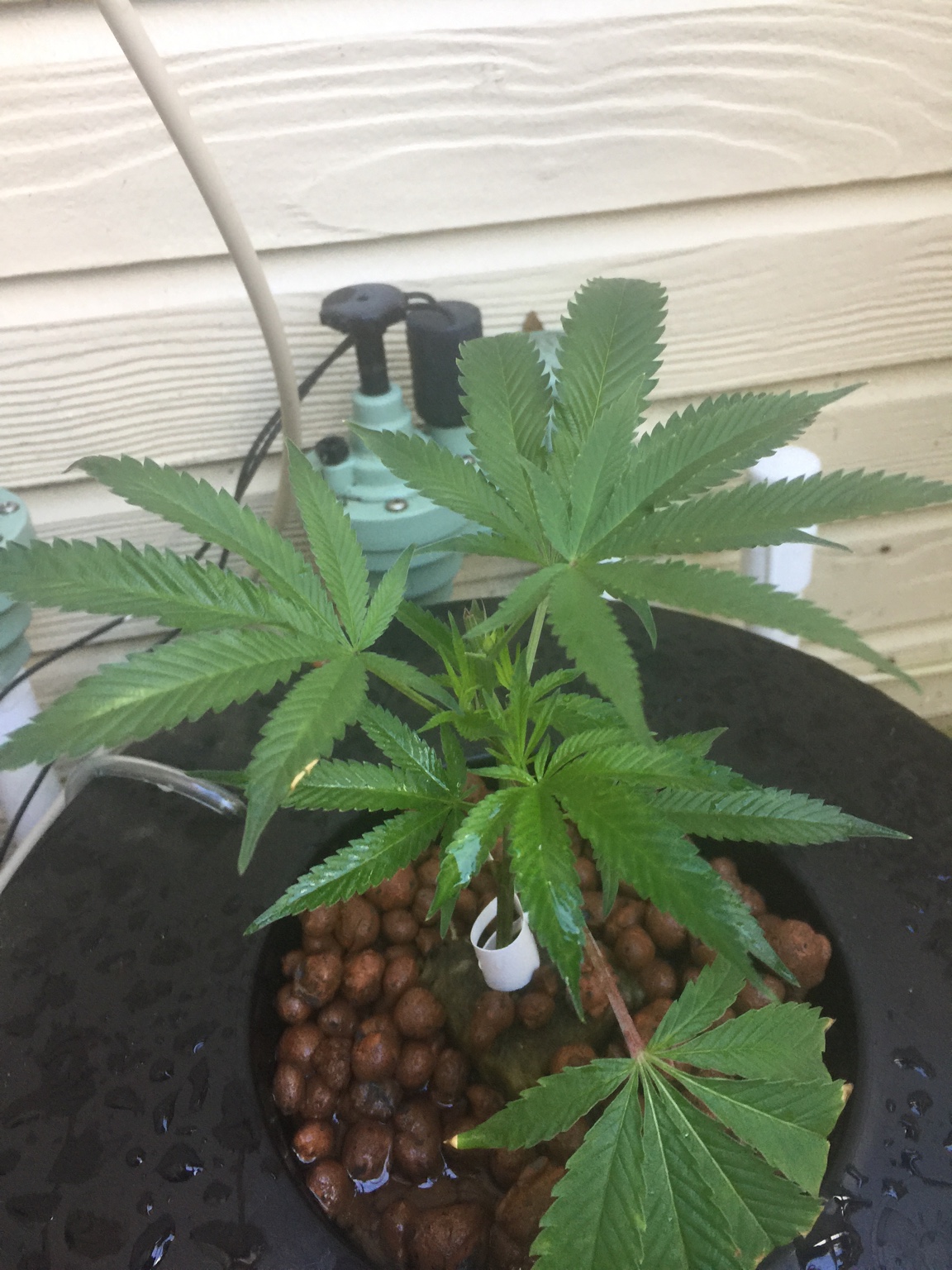 The girls really took off after putting them in their respective growing pots and were stretching about 1-2 inches a day.

I purposefully chose to grow one in soil and one in DWC as a test of the DWC system. I quickly found that it would be difficult to compare as the plants were of different strains. The Platinum was stretching much faster than the AC and I was finding myself pinching her back to keep her height under control.

While I do have a Medical Marijuana Card, my city does not allow growing outside when visible to neighbors, so this was to be a semi-stealth grow while they were outside.
Completed - Troy's 2nd - Autos - DP Ultimate & Euphoria, Meph Alien v Tangle, RQS Diesel
Troy's - Freezer JuJu Tincture -
Auto Drip Irrigation for CoCo
Completed Troy's First Grow - Animal Cookies & Platinum OG Clones - DWC & Soil - 2017

I really wasn't good at taking baby pictures of the girls as we were really busy with a remodel. 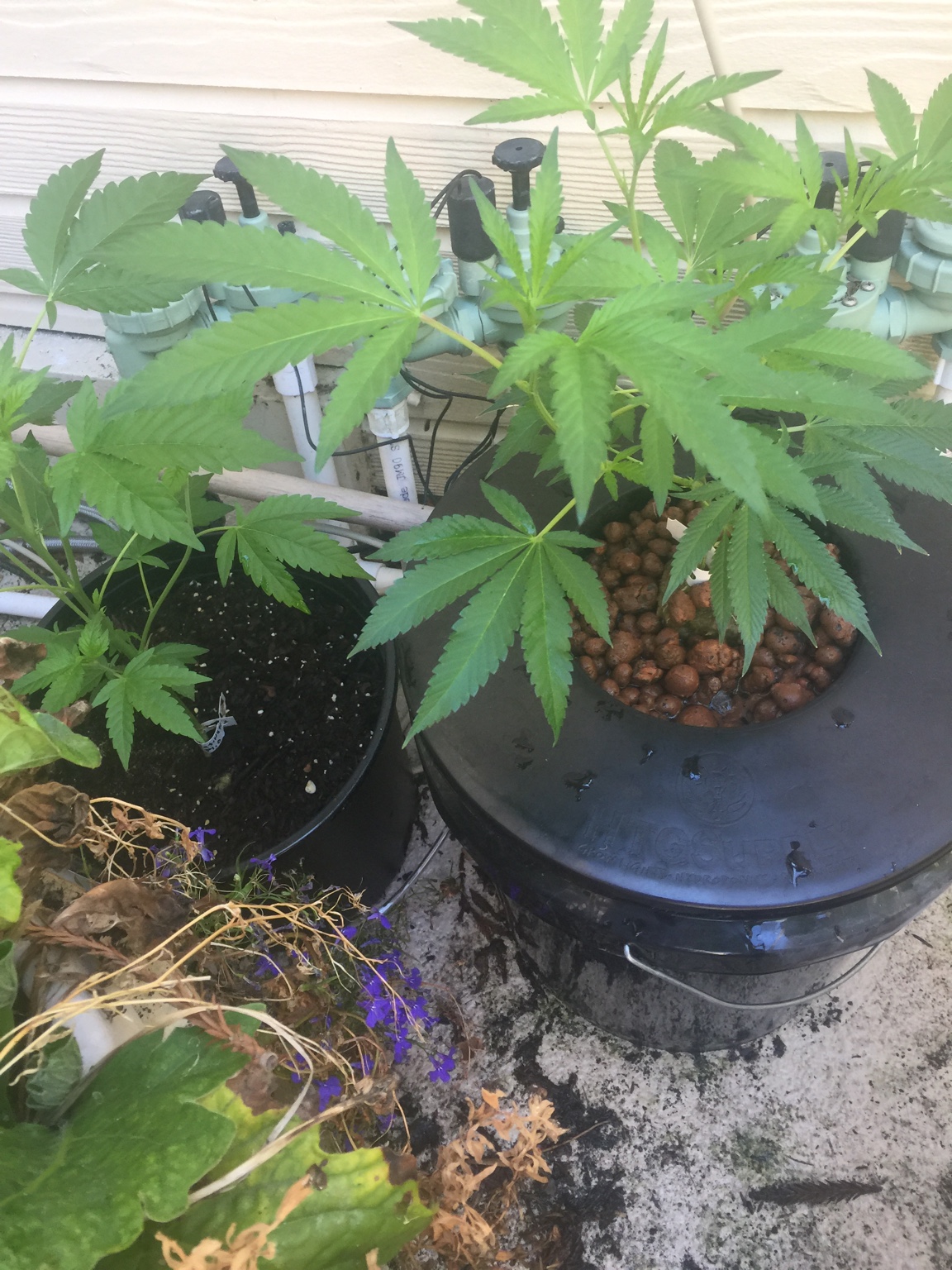 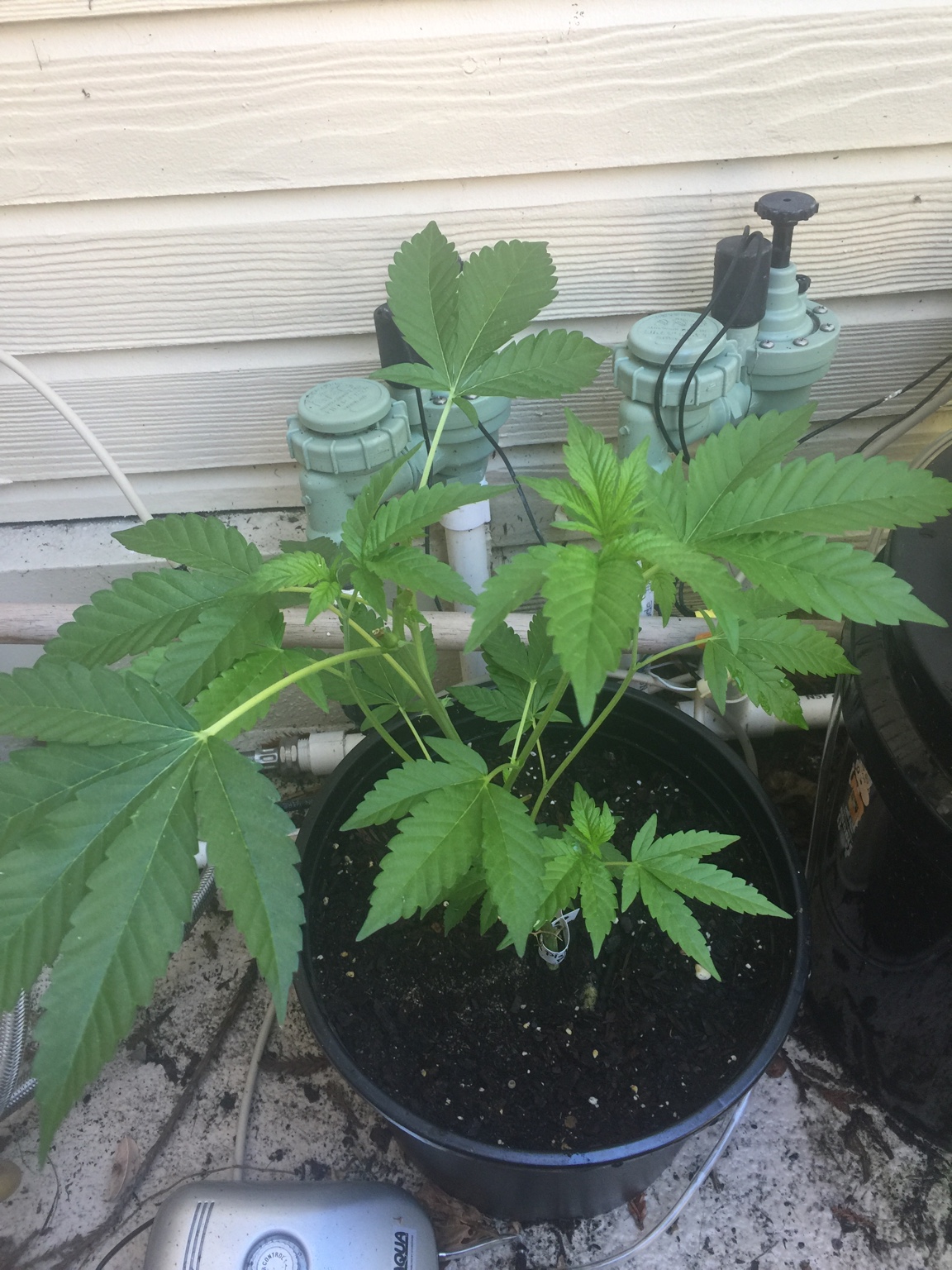 The girls doing pretty well on their own and I am enjoying just watching them grow. I read a little on pinching but hadn't yet read up on advanced pruning. Oh I have so much to learning.

In the first 8 weeks the girls have continued to grow and their stretch was getting out of control for a semi-stealth grow. I started using stakes to train branches to open up the plants. It was easy to do on my plant in soil but the DWC was difficult as I didn't have anywhere to tie her down.

Time to go shopping on Amazon for a Grow Tent and supplies to move the plants inside. Selected a Ipower 36x36x72 Grow Tent. Nice Tent but in retrospect smaller than I thought it would be. I guess we learn from our mistakes. I also bought iPower 4 Inch Air Carbon Filter, 12 Inch Length Odor Control Charcoal Filter. Initially I boughat a VivoSun 4 inch 203 CFM inline fan but returned it as I felt it was too noisy. I instead went with two TerraBloom Duct Fan 100 CFM (one pushing and one pulling air from the tent.

Thanks for joining In Velik. I read your first journal and really learned a lot from it.

I'm trying to get caught up to where I currently am on my first grow. I've learned so much from other's Grow Journals, I'm hoping to give back and share my errors and successes as I learn more. 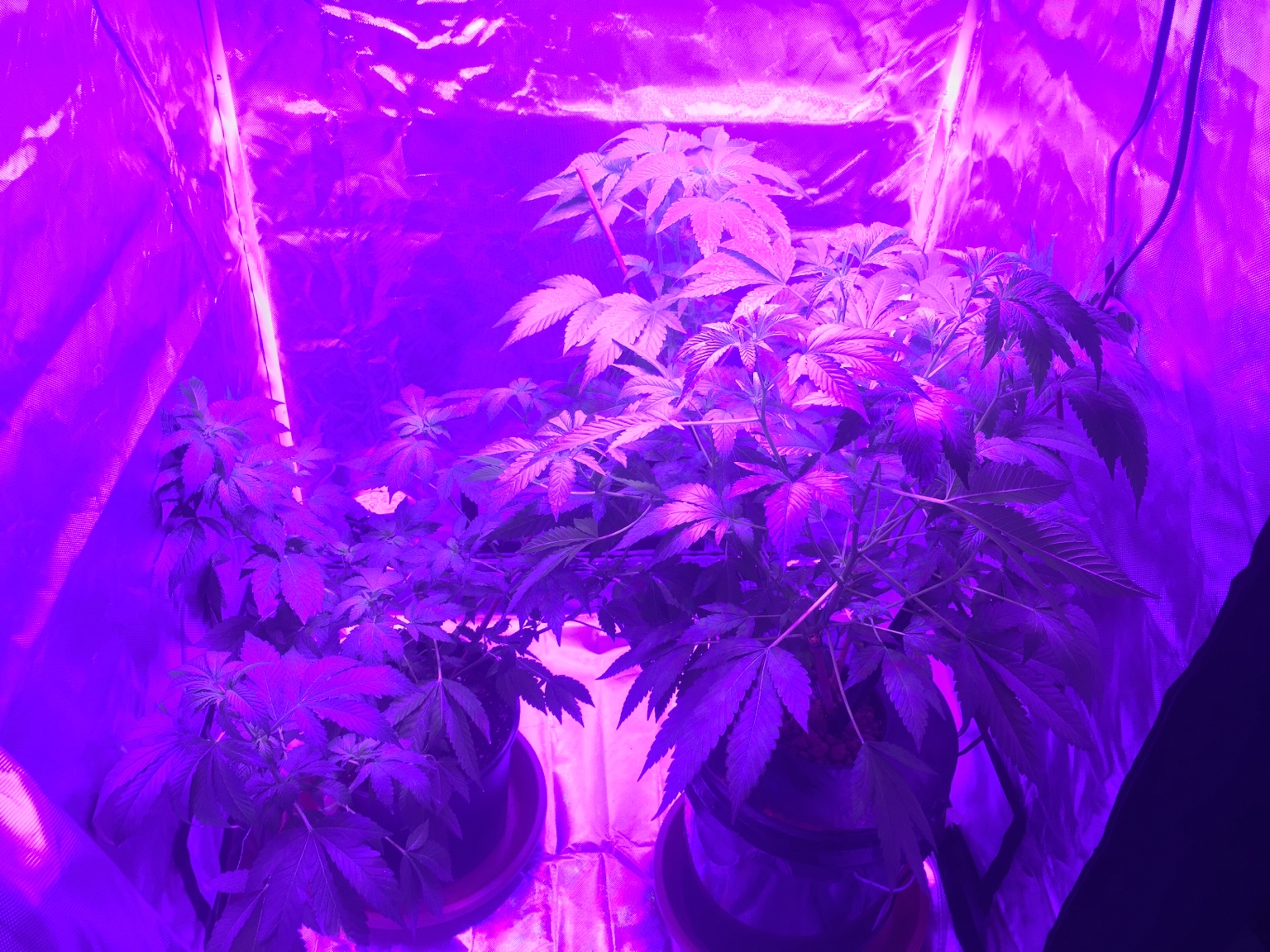 Was really surprised to see the burst in stretch. It was evident I needed a scroog. Off to the hardware store for pvc and metal fencing.

Also to my surprised the girls started shooting flowers. 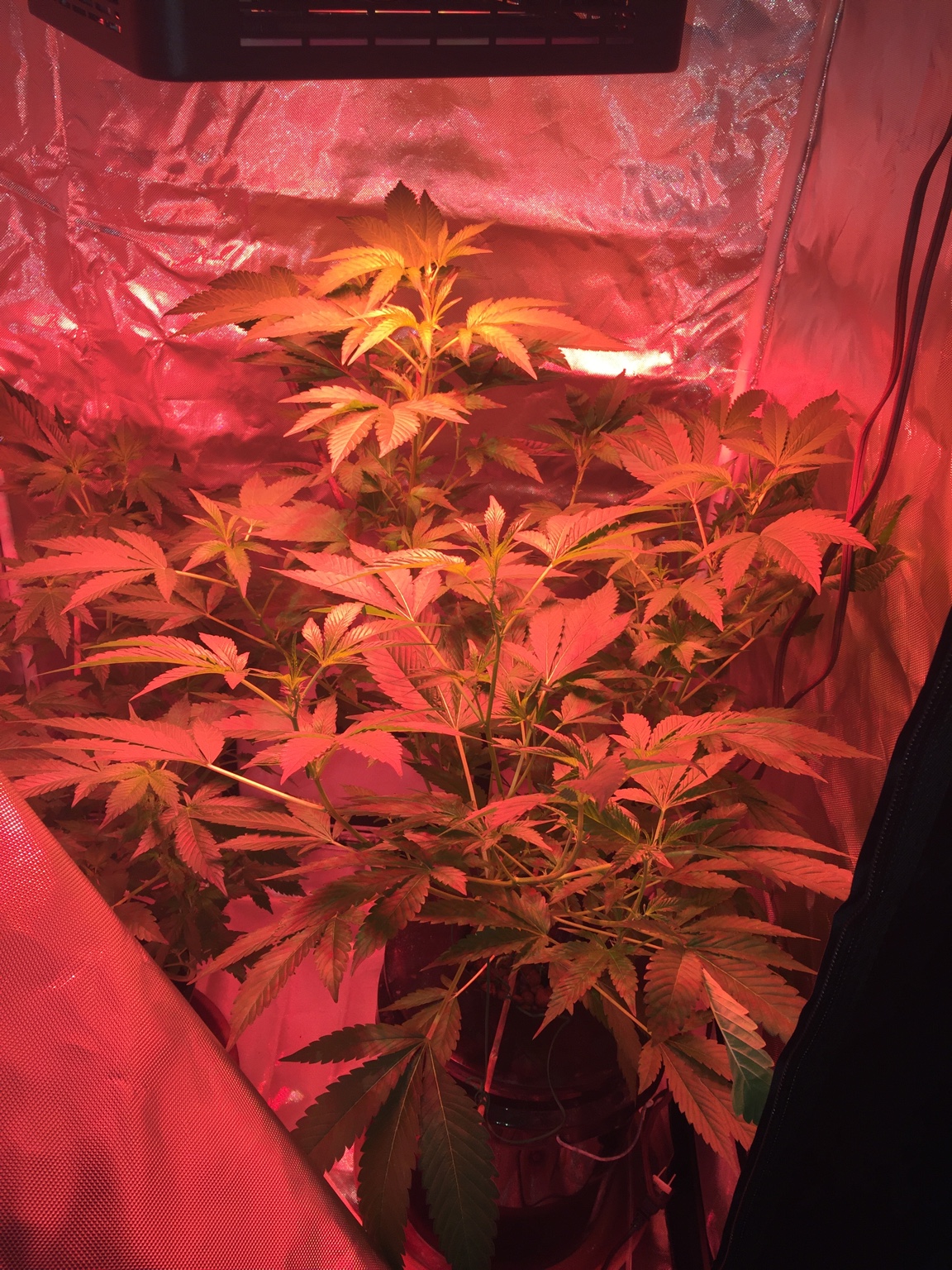 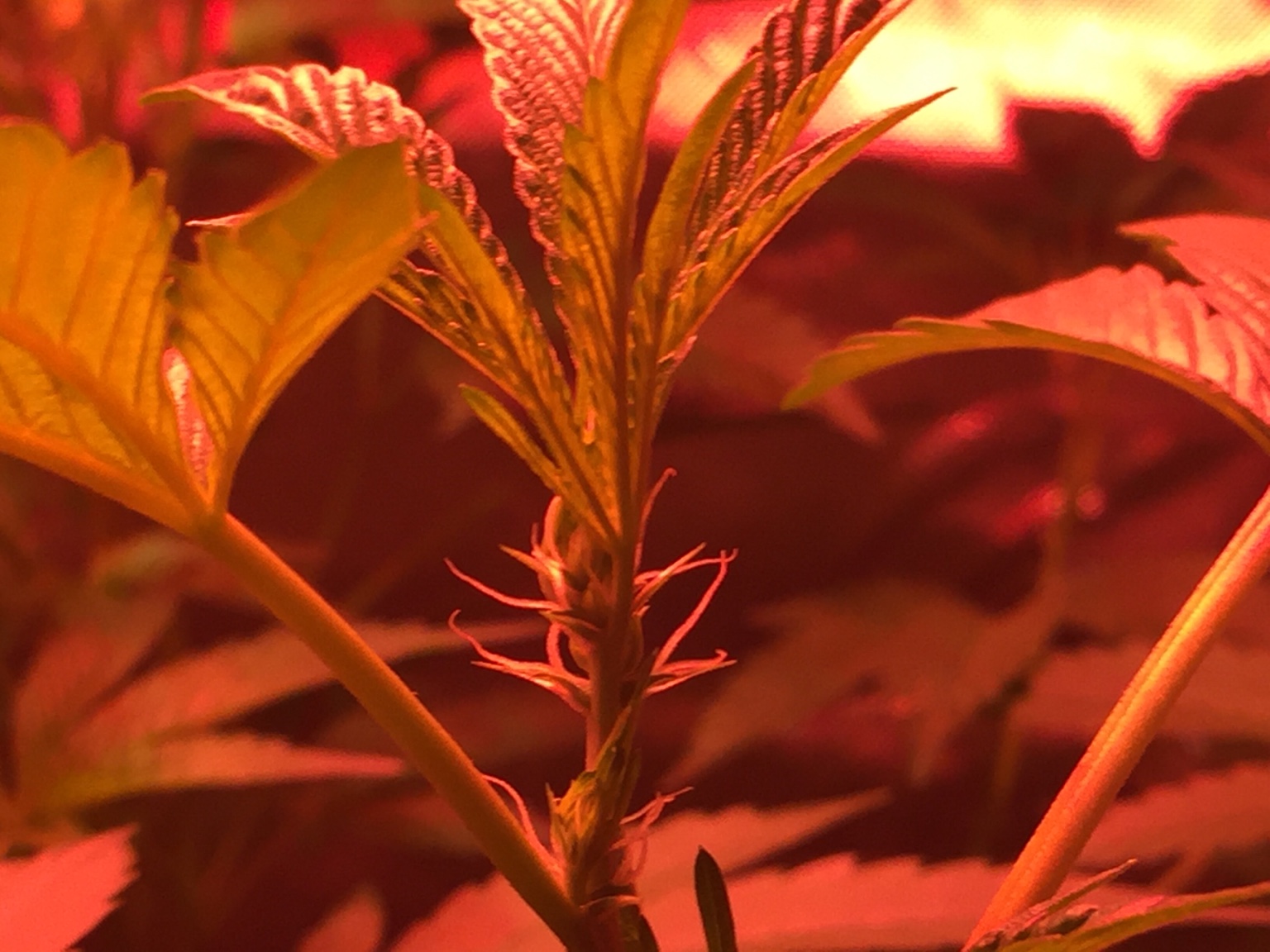 The girls must have been ready for 12/12 switch over. They are starting to flower nicely. 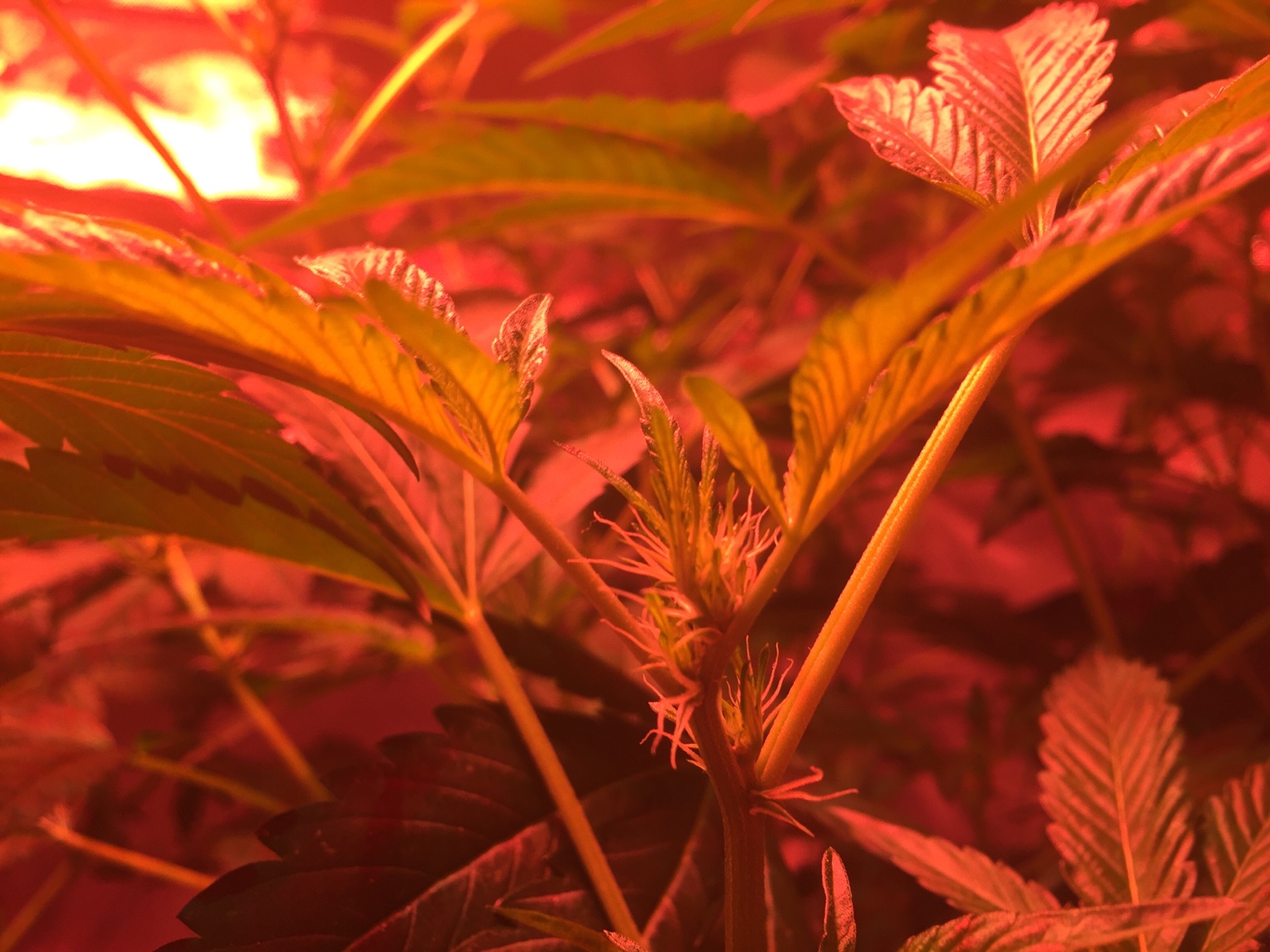 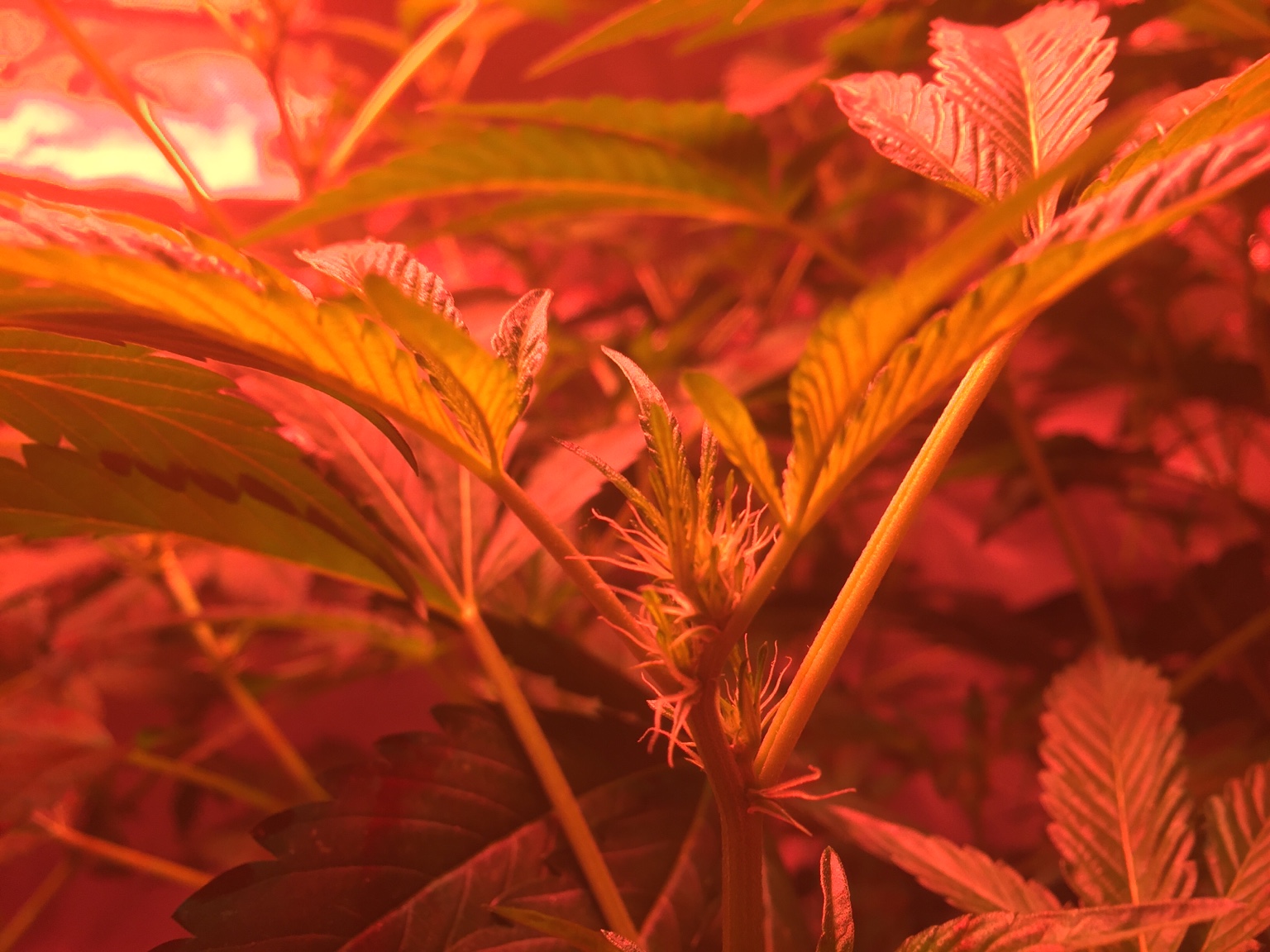 Scrogg now in place and flowers popping up. 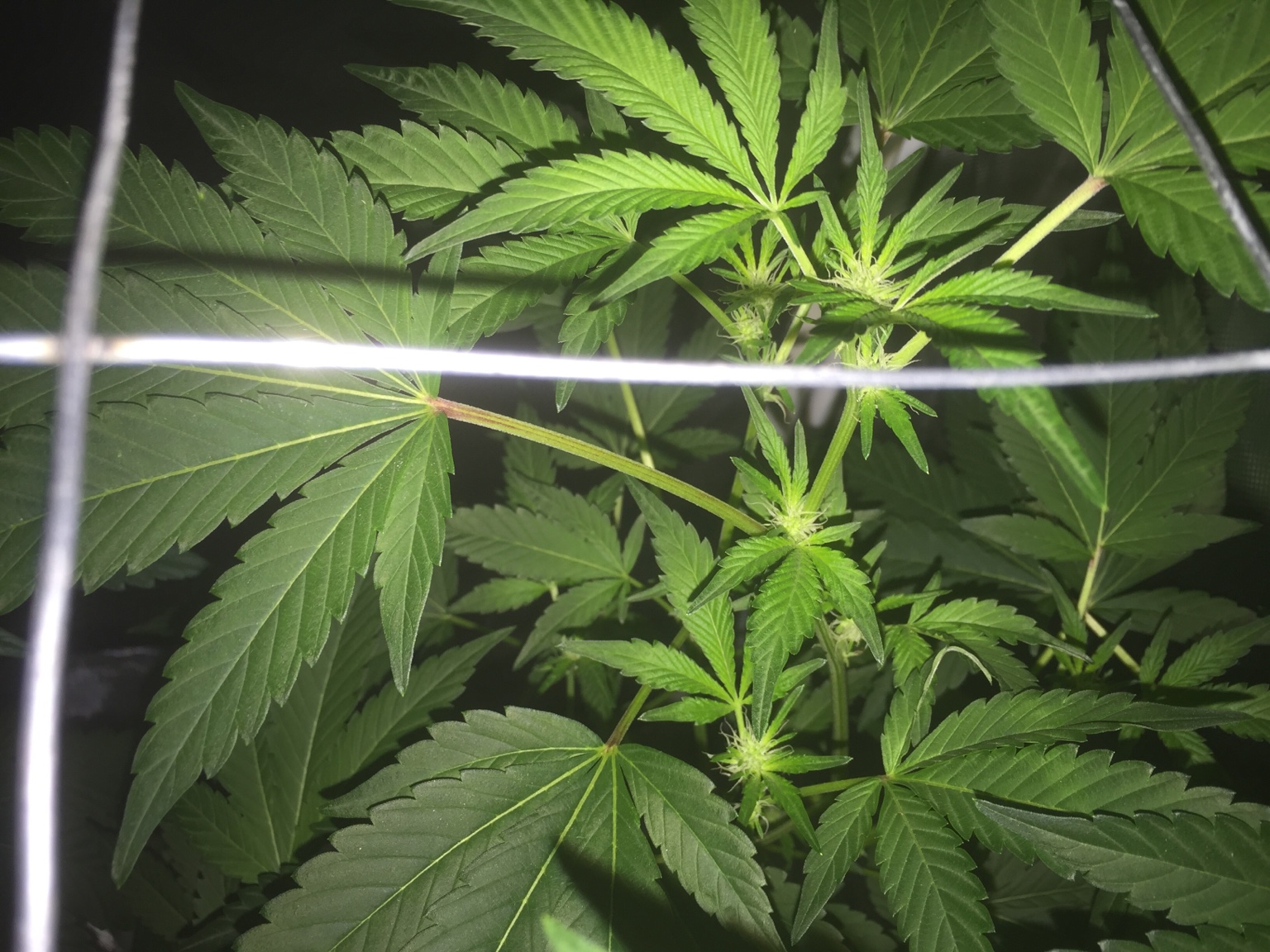 Just when I was thinking- boy this is easy, my first challenge popped up. I found damage on a couple fan leaves and was obviously some type of insect infestation.

I posted this picture and Luweegi was helpful in helping identify as earwigs.

I was able spot treat with insecticidal soap and neem oil. 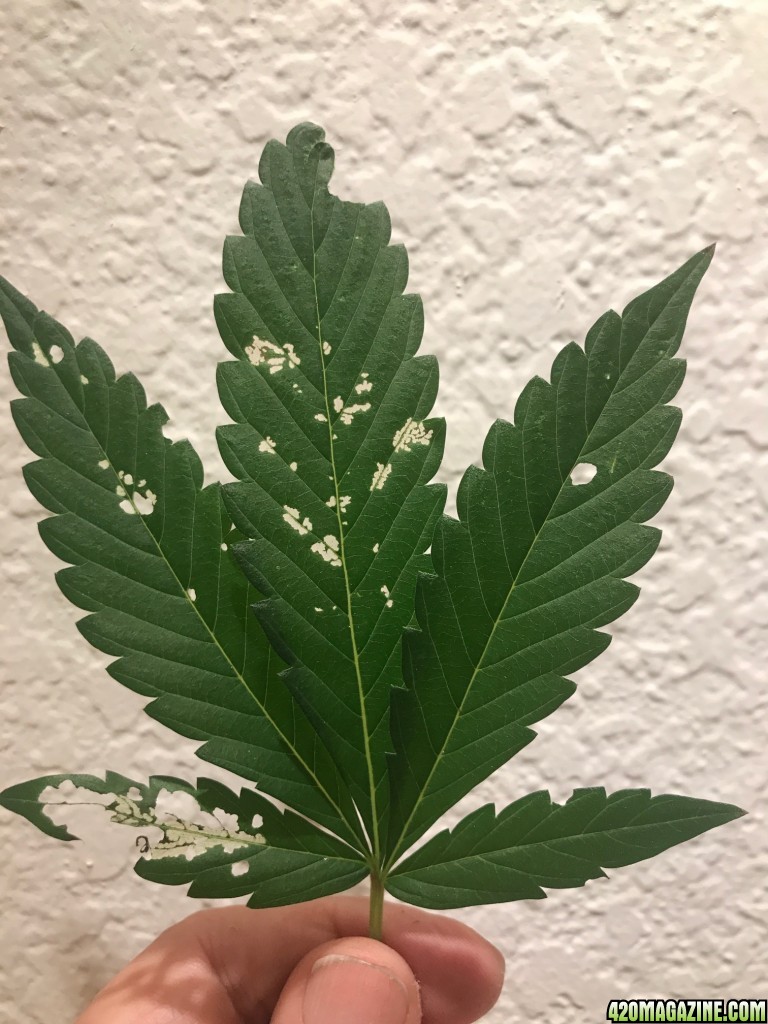 I think I finally have my bug problem under control. Today I found a gray moth flying around inside my tent. I had left the flaps of the tent open during the light cycle as we had a heat spell and my fan was not keeping the tent cool enough. Temperatures had spiked inside the tent to 95. I made a change today to my timers and will be using my lights at night time instead of daytime. I may have to swap out my fans for something more powerful. 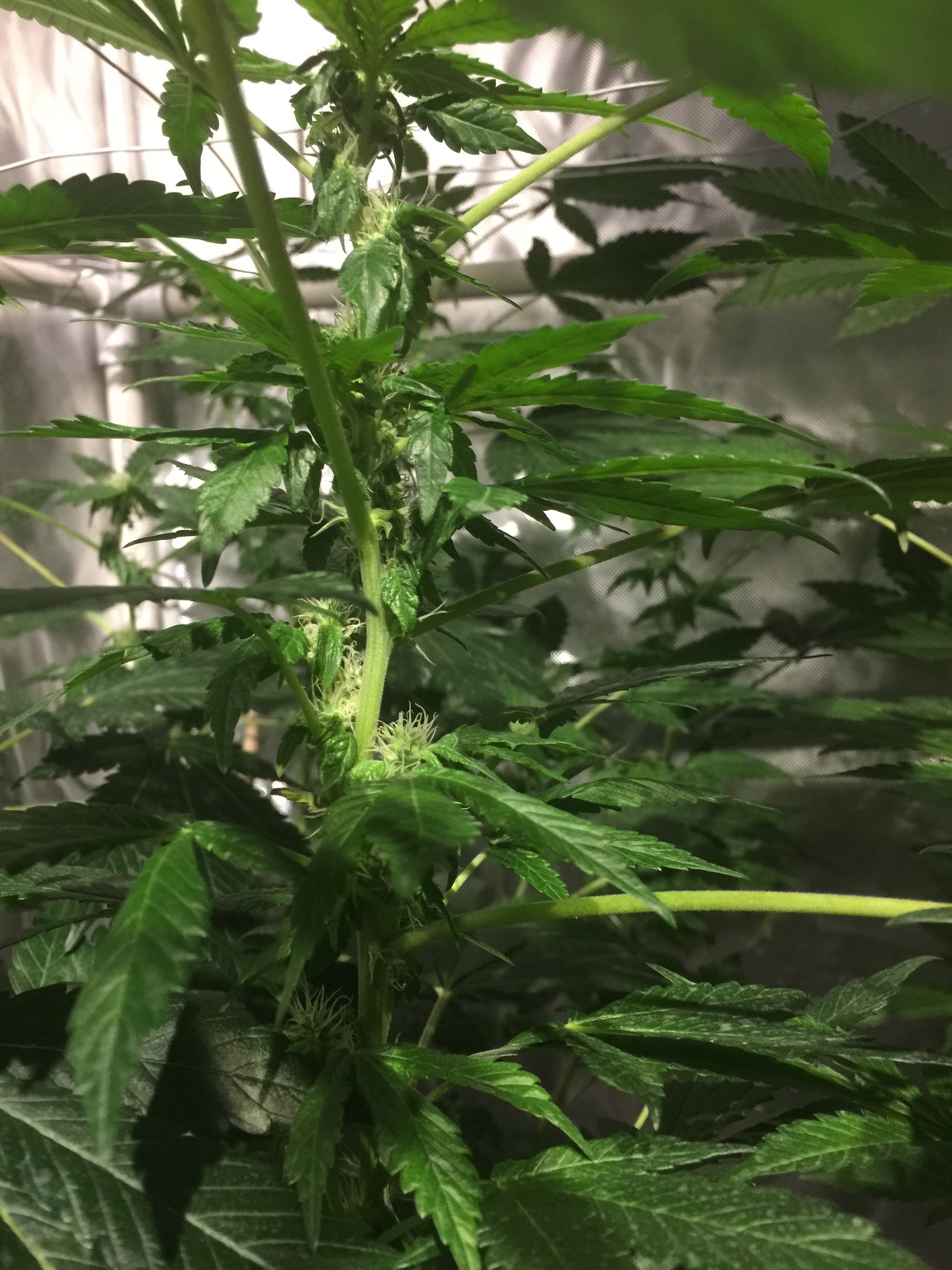 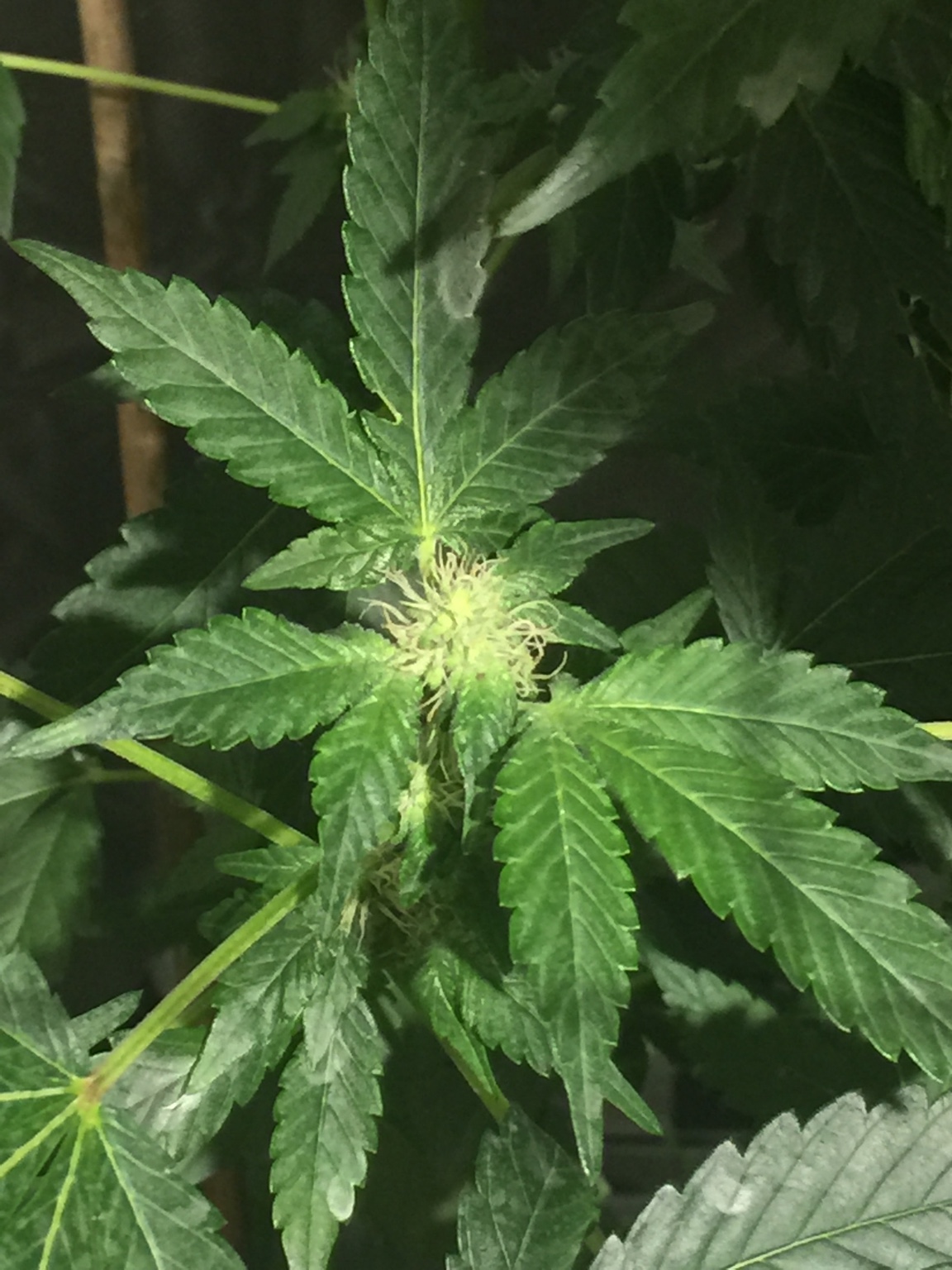 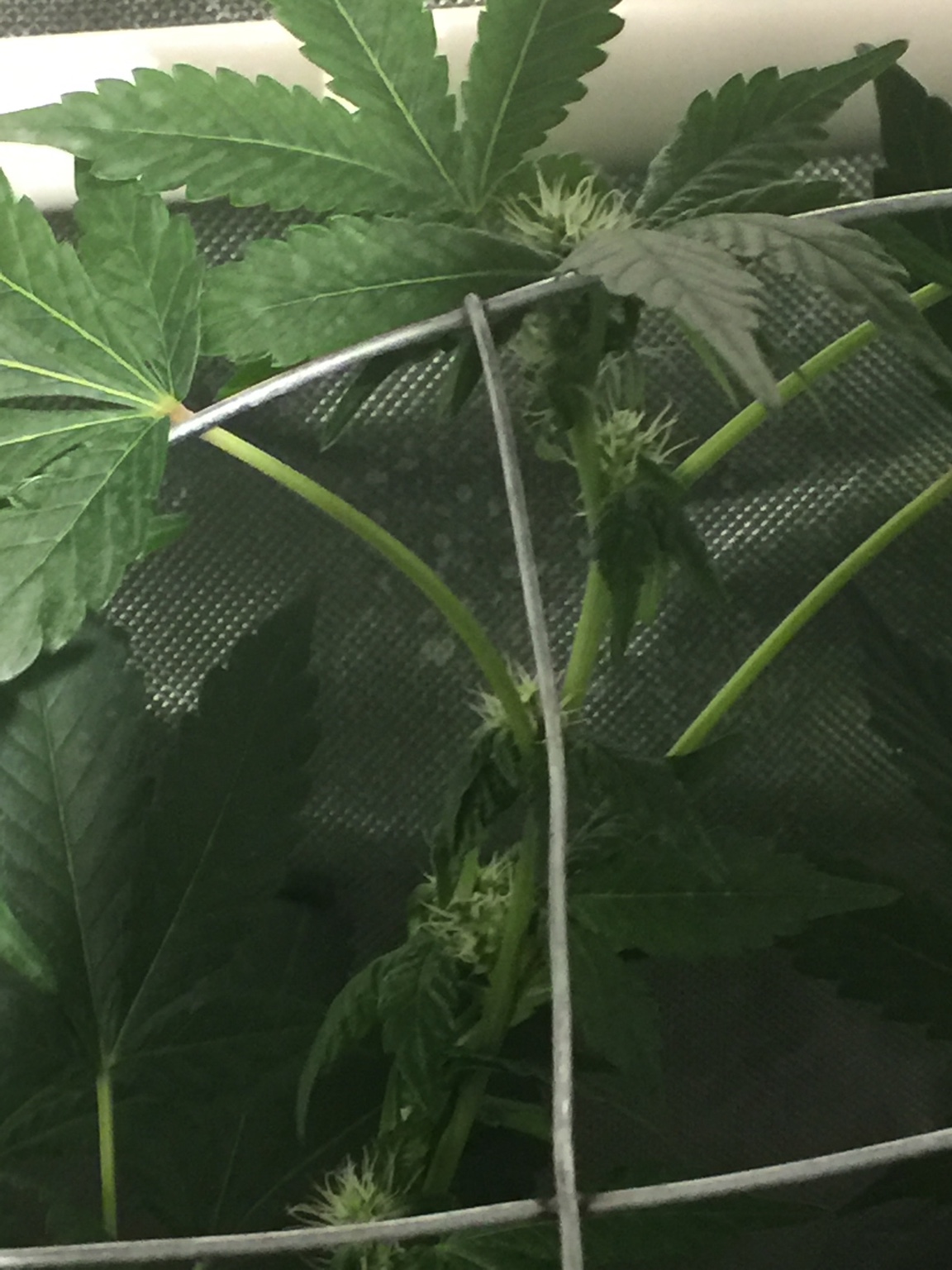 I am currently at day 41 Flower and decide to add Molasses to my DWC last weekend. Since adding I am having trouble keeping my PH at 6.0-6.5. Today it was up to 7.5 so I used PH Down to bring her back to my target range. It took me about 20 ml to get it down to range.

Sup Troy -
New here as well and following along. Wanna see how that light works out for ya in the end.
Best of luck with your grow Sir.
Repeat success, reinvent failure.


OldSchool1965 said:
Sup Troy -
New here as well and following along. Wanna see how that light works out for ya in the end.
Best of luck with your grow Sir.
Click to expand...


Thanks for following along.

I think the light is working well for a 3x3 tent. I mostly only using with the Grow switch on. I was using full spectrum but was creating too much heat. I've purchased a new fan (380 CFM) and will try her out this weekend. I'm mostly adding to help control the odor as the carbon filter isn't really working well with the 100 CFM

Things seem to continue to go well. Watering is about every 3 days in the soil and I top up daily on the DWC. The Animal Cookie in DWC seems to be very thirsty and drinks about a liter (quart) per day.

Nutrients - I have been using Advanced Nutrients 3 part base for my grow. I have been changing the nuts in the DWC about weekly but sometimes let them run for 2 weeks and keep an eye on levels. I'm using 2 ml per liter or approx. 5 Tablespoons for 5 gallons. 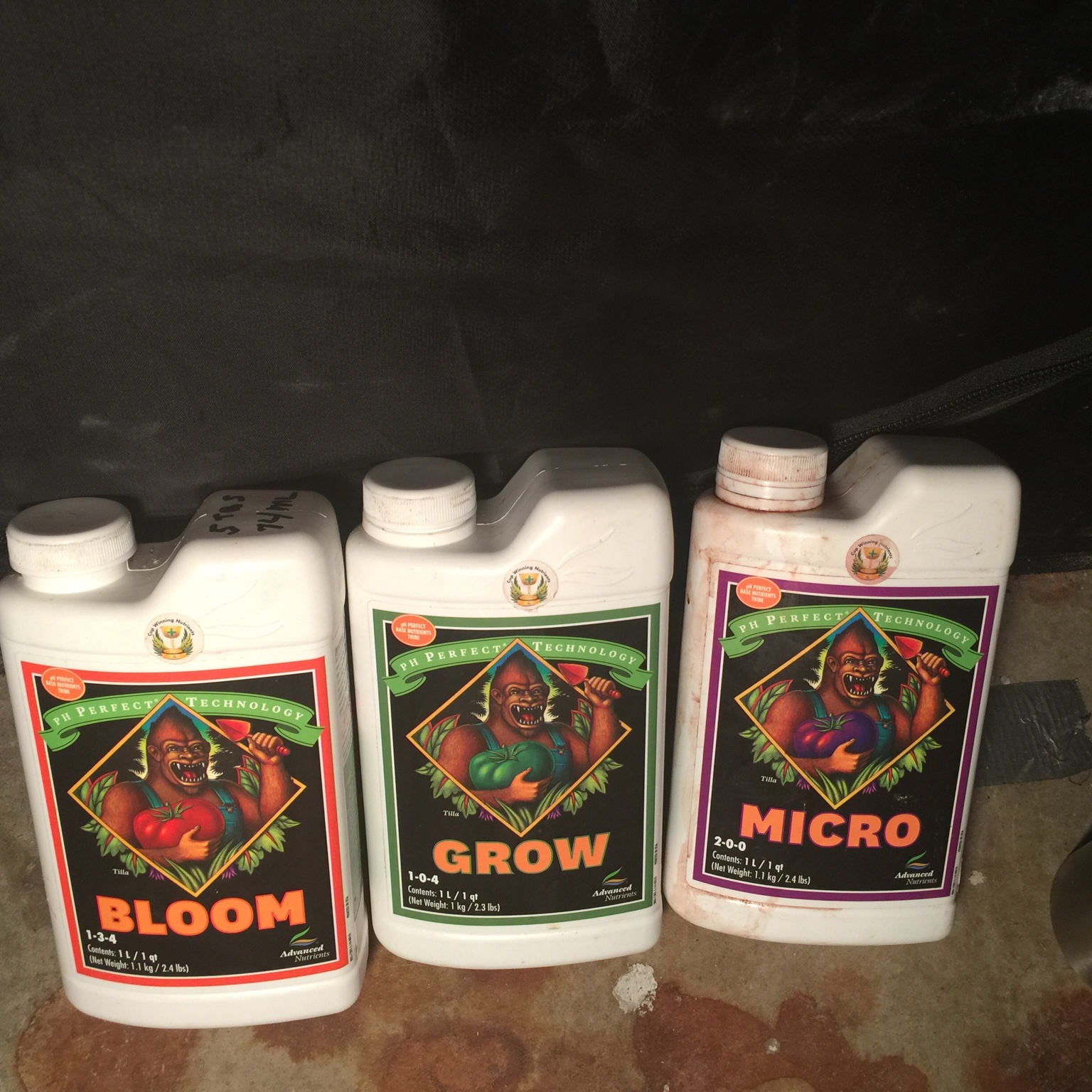 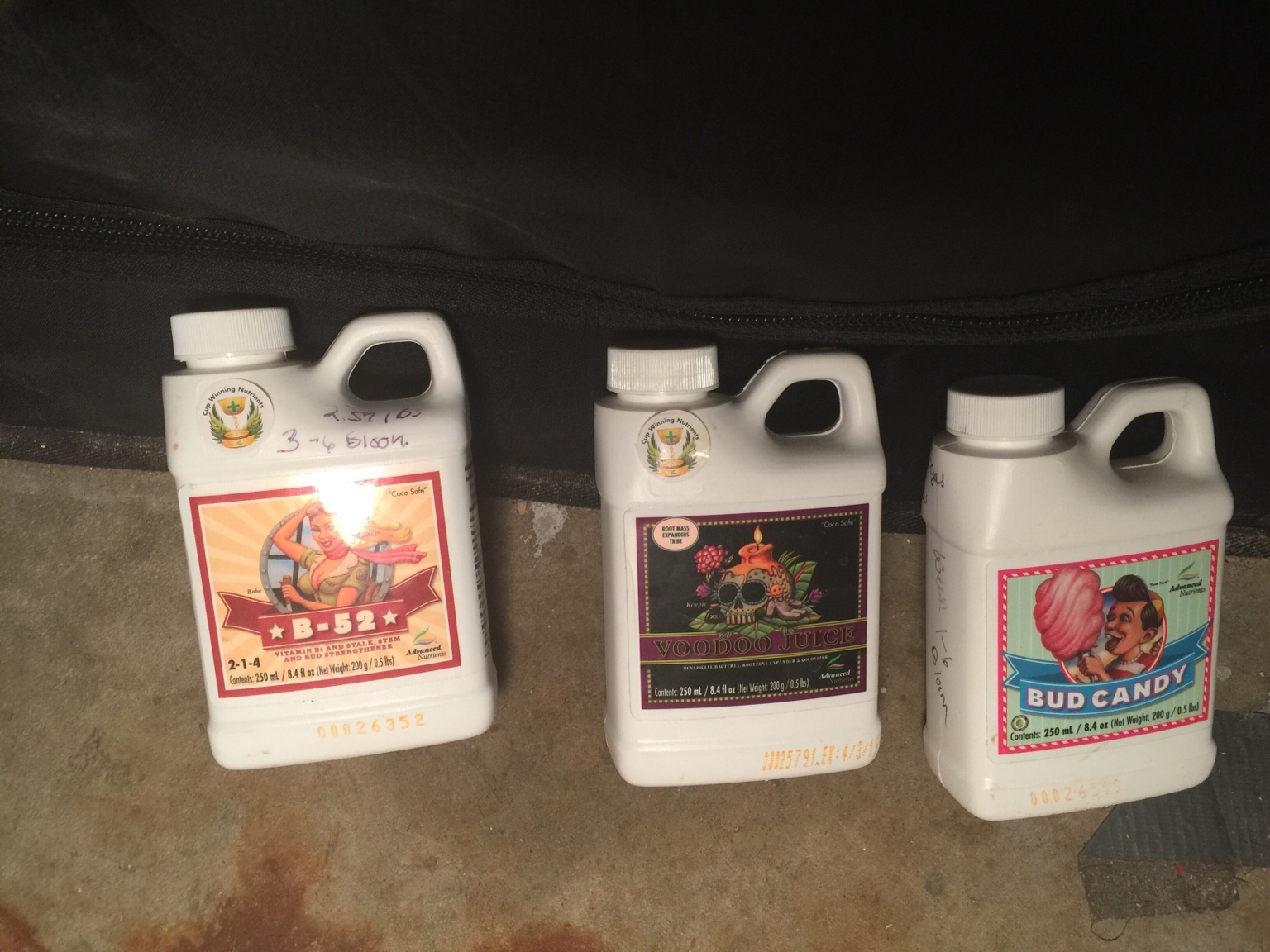