I kinda figured that the above named Golden Coast Genetics strain deserved its own place in the spotlight, and maybe a little background info on its history since I got no love when I initially asked about the BOEL. This isn't going to be cohesive and orderly because that's not how my mind works. I'll do my best to not get too far off track.

Some of you might be old enough and worldly enough to fondly remember the acid days of the 60s. One of the chief purveyors and manufacturers of LSD was the Brotherhood of Eternal Love with their "Orange Sunshine" blotter, often freely gifted to encourage "enlightenment". There's a semi-documentary movie by the same name which is the story of the Brotherhood of Eternal Love - a spiritual group of surfers and hippies in California who became the world's largest suppliers of LSD.

Skunk. Very few other words can conjure up such a strong smell association. The history of skunk weed is hotly contested in some circles. Sam "The Skunk Man" developed and christened the first Skunk #1 strains in the mid-70s, but others claim that 'Skunk' was initially a name for a strong smelling line of hybridised and acclimatised pure sativas grown in California by the Mother Earth communes in the mid to late 60s and also by the Brotherhood of Eternal Love, predominantly in Hawaii.

Regardless the truth of that bit of history it's accepted that the old BOEL skunk strain has been continuously grown in the islands since then, albeit hybridized/crossed/mutated/bastardized and otherwise altered by the vagaries of time. This Golden Coast Genetics strain utilizes a cross of BOEL Skunk, otherwise known as Brotherhood '79 Skunk.

Johnny or Johnny D, the other genetic strain in this cross, is an old-time strain that was bred in Hawaii and is a cross of Thai and Cambodian sativas. It's been an island staple for many years but it too has changed over time.

So this is supposedly a skunky Hawaiian sativa crossed with other Hawaiian-developed sativas, but given that the young leaves are short and fat as hell I'm thinking that an Afghan worked it's way into the genetics somewhere along the line. I've seen pics of this strain from growers in the islands and even though at first it looks like an Afghan the sativa kicks into high gear during flowering. It'll be fun to see how it grows out for me.
Magical Mystery Clone Tour - current
EtOH extraction with vacuum purge
Thaibodian Skunk ***** A Tale of Two Thais
Siberian ThunderCat strain ***** The Tardis​

In the beginning there were seeds. 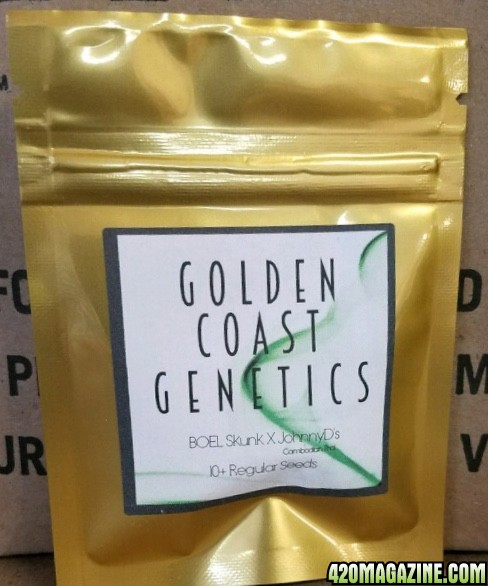 And the Rider saw that the seeds were good. Seeds and water begat seedlings. 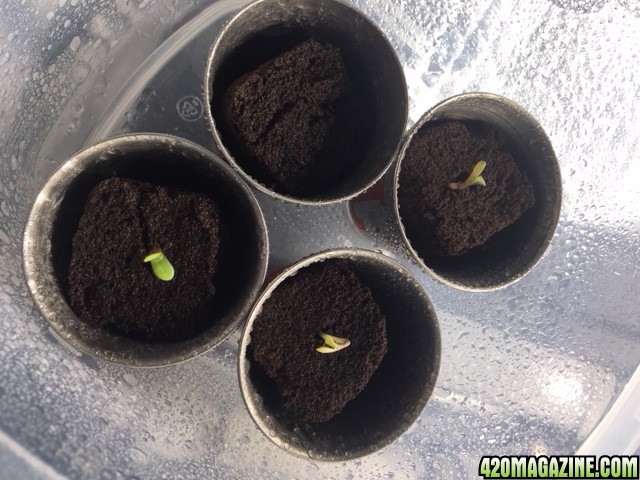 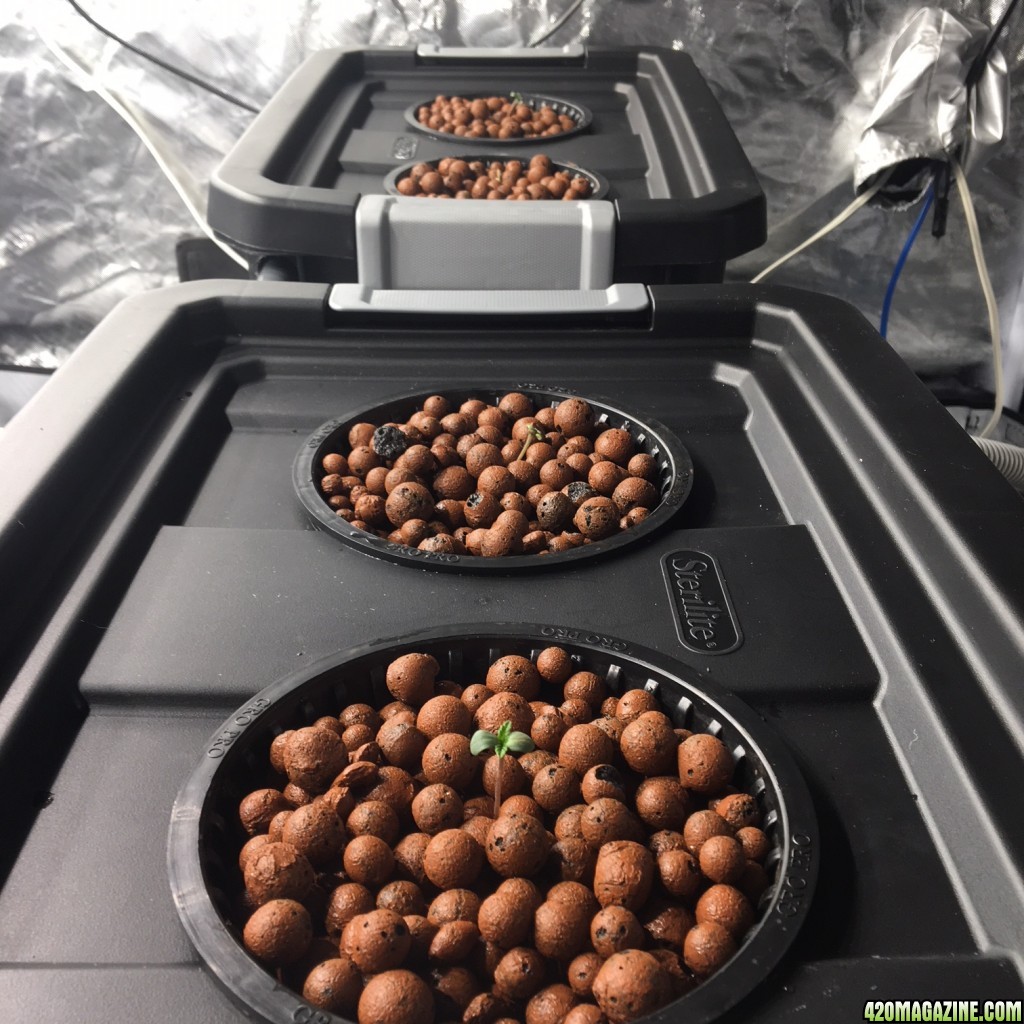 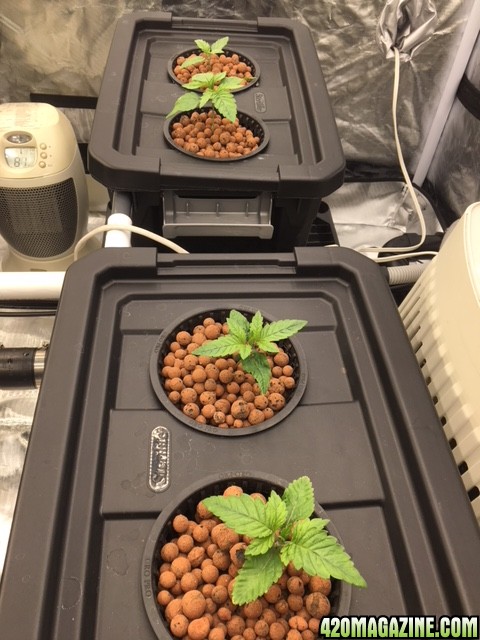 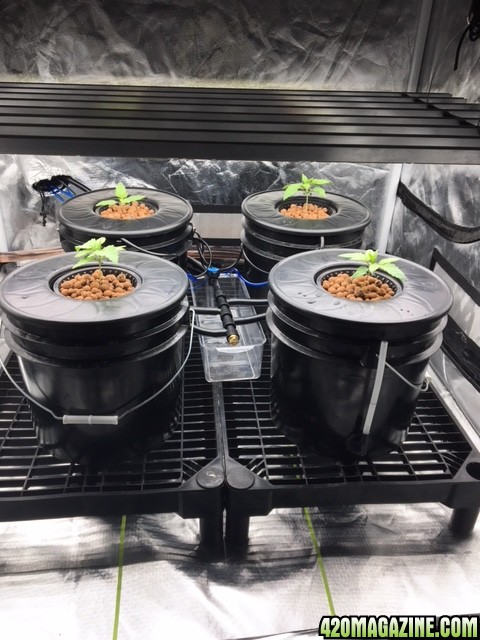 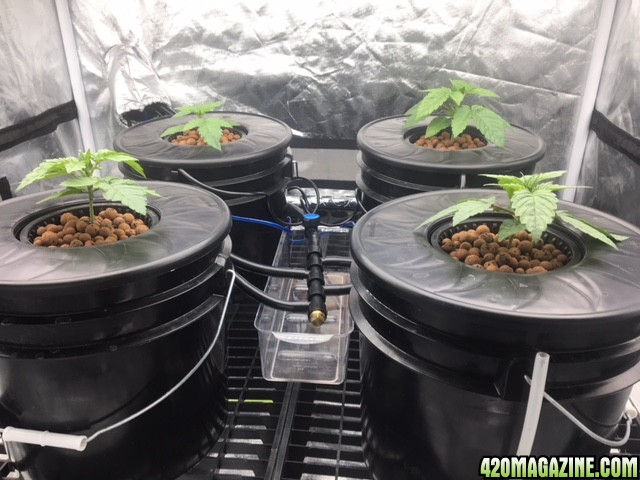 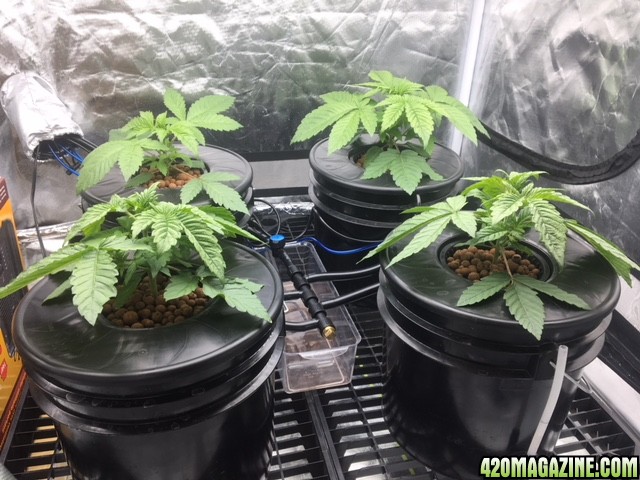 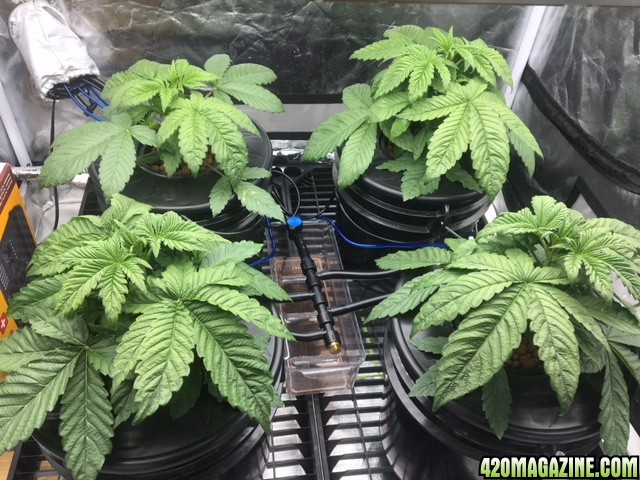 Oh hell, you know that somewhere along the way indica got into the mix. It's been 50 years! And those leaves look to be heavily influenced by an indica strain.
Magical Mystery Clone Tour - current
EtOH extraction with vacuum purge
Thaibodian Skunk ***** A Tale of Two Thais
Siberian ThunderCat strain ***** The Tardis​ 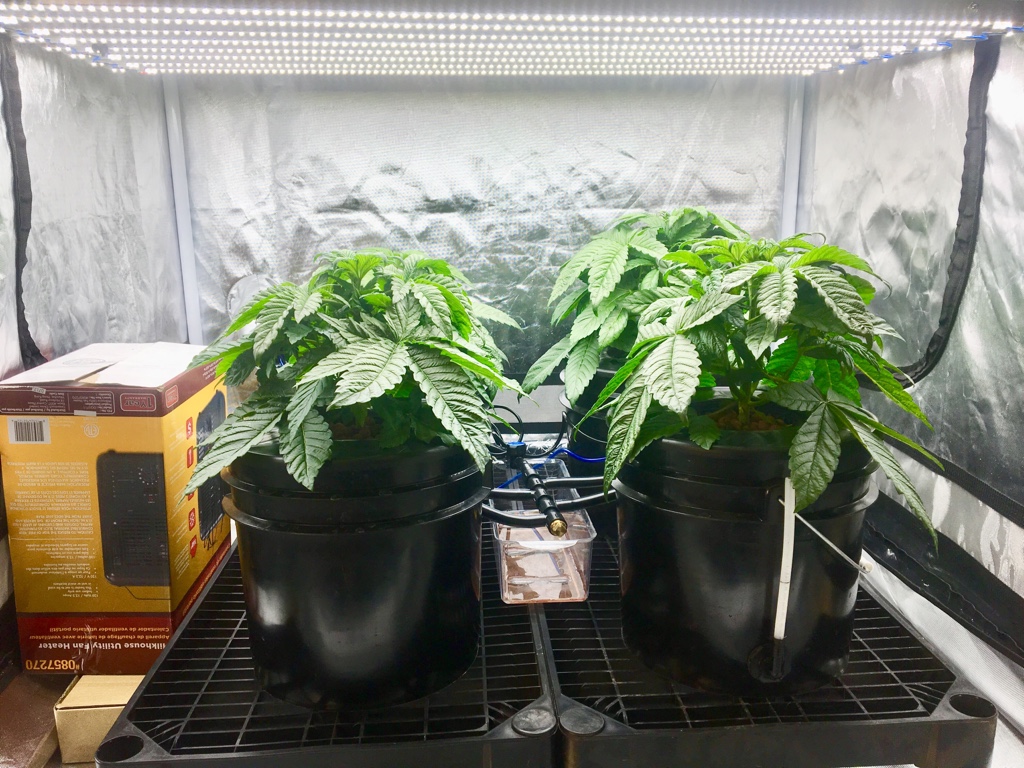 I can't speak to the quality of light but the coverage looks to be excellent.

Weird leaves for sure. For plants that are supposed to be a sativa/sativa cross they look a LOT like squatty indicas. The lights are Samsung FB22Ds in 5000K. Def a veg-only light.
Magical Mystery Clone Tour - current
EtOH extraction with vacuum purge
Thaibodian Skunk ***** A Tale of Two Thais
Siberian ThunderCat strain ***** The Tardis​

Topped them today and they got a res change to transition nutes with Flying Skull products. I'm flipping next weekend whether they like it or not. 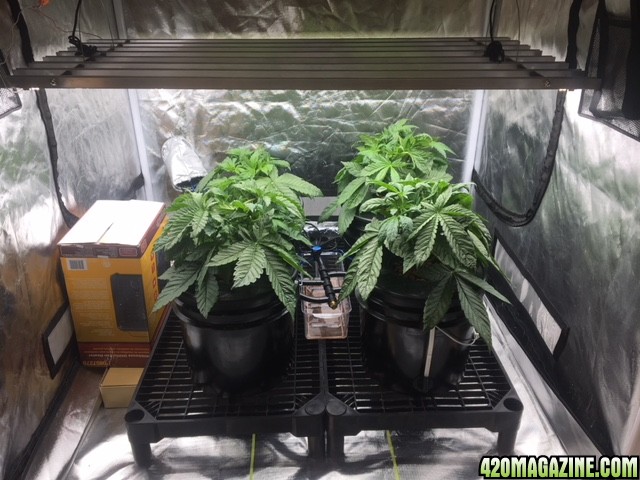 Saved the cuttings to see how well they respond in the Bubblator Clonatron 3000. 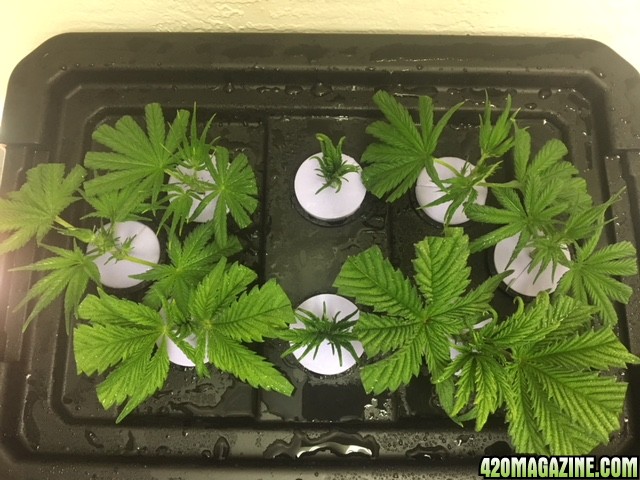 Thaibodian Skunk
Day... something. Who the hell cares. They're not dead yet despite an almost complete lack of attention. I'm going to go out on a limb and say they're all females because the thingamabobbers are crossed. But then, I've been wrong before!
I hate photos under HPS. 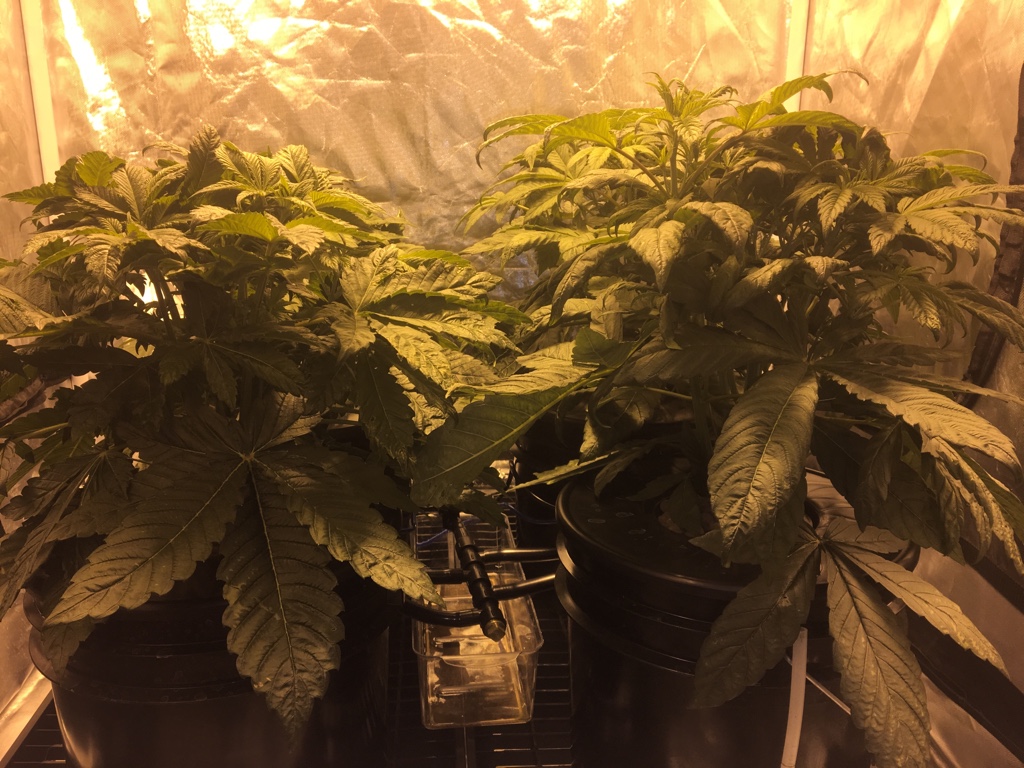 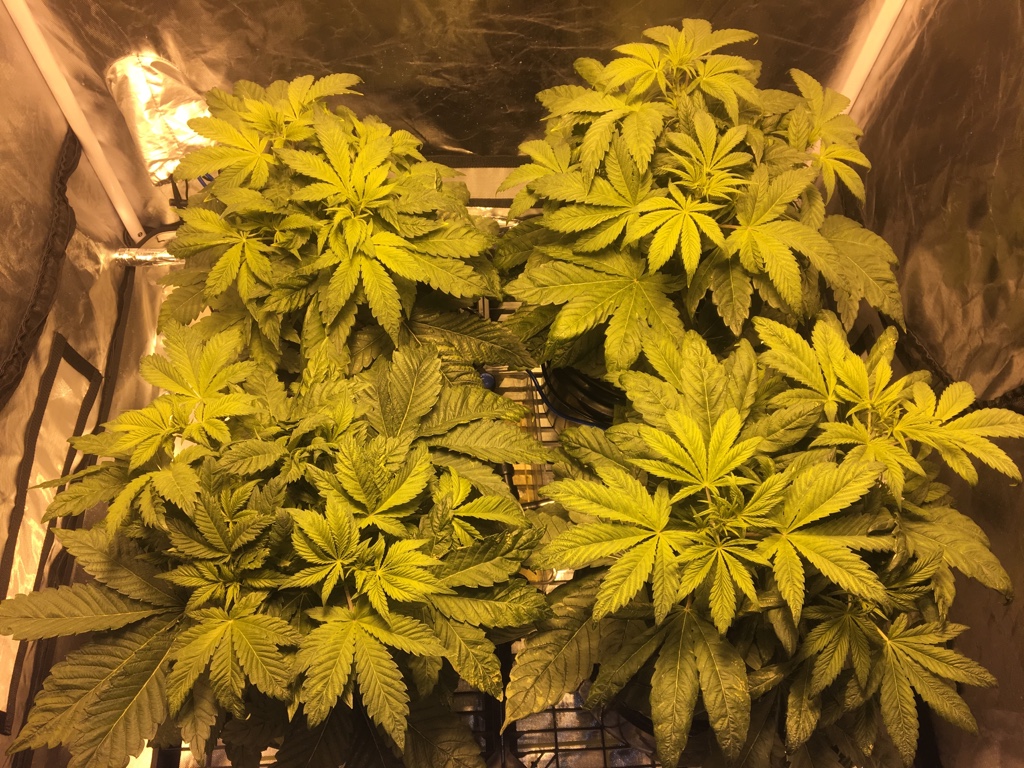 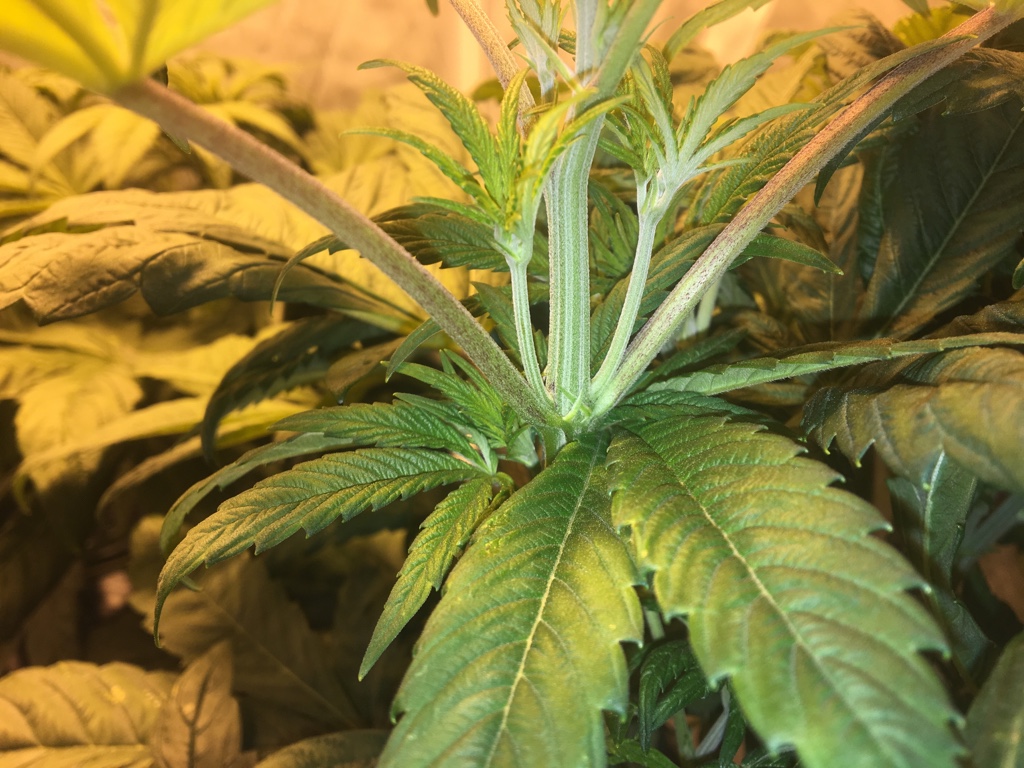 The Thaibodian side must be recessive because these babies look like a heavily Afghan cross. I wish they'd hurry up and show sex! I don't want to feed anything that I'm just going to chop. They all have crossed stipules so maybe I'll get lucky this time.
Magical Mystery Clone Tour - current
EtOH extraction with vacuum purge
Thaibodian Skunk ***** A Tale of Two Thais
Siberian ThunderCat strain ***** The Tardis​

Just a quick photo update. Nothing new happening here. I hardly give them a passing glance except to see if they're still alive! LOL 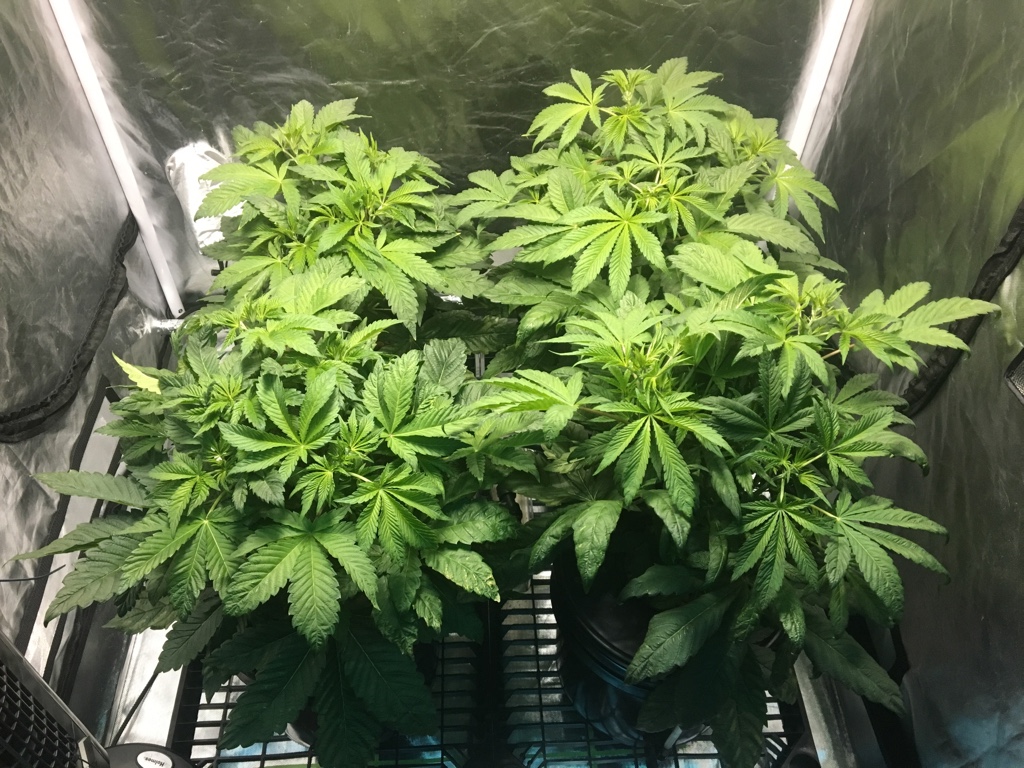 I am going to get them out of those 4gal buckets and into something a bit more roomy. As small as the plants are the roots have completely filled the available space. Some 7 1/2gal totes and a 1.5" recirc system should wake them right up. This old RDWC has to go!

I'm here my pirate friend and man I one day aspire to be.... how dare you start threads without inviting your friends 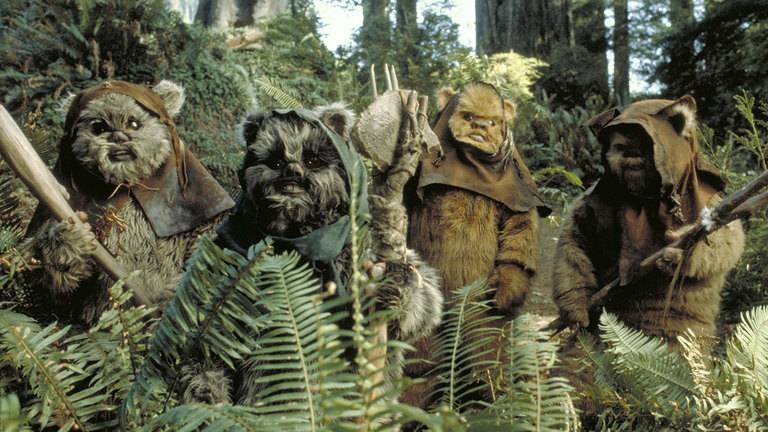 Ha! Dabber, you're killing me!

The link has been right there in my sig all along. This grow hasn't been high priority for me, as you can tell. That needs to change if I want to do these plants justice.
Magical Mystery Clone Tour - current
EtOH extraction with vacuum purge
Thaibodian Skunk ***** A Tale of Two Thais
Siberian ThunderCat strain ***** The Tardis​

There now I will slide in over in that comfy chair.
Please don't forget to vote in the contests

You must be way over feeding them, look how fat them leaves are. Hell I feel skinny looking at them.
Please don't forget to vote in the contests

These are some weird ass plants. Not at all what I expected from a triple sativa cross. Much indica in this one I sense.
Magical Mystery Clone Tour - current
EtOH extraction with vacuum purge
Thaibodian Skunk ***** A Tale of Two Thais
Siberian ThunderCat strain ***** The Tardis​

Welcome to my madness, Dabber and JustMeds. This should be called the "hope they don't die" grow since they get almost no attention. I make sure their res is full and that's about the extent of it. If they make it to the end it's only because they're tough little mutant weirdo fat-leaved pseudo-sativa indica freaks.
Magical Mystery Clone Tour - current
EtOH extraction with vacuum purge
Thaibodian Skunk ***** A Tale of Two Thais
Siberian ThunderCat strain ***** The Tardis​

Just wanted to wish you a happy holidays as well Mr rider. Sending 420 love to you and all yours this weekend [emoji319]
Current grow and breeding project:
The Quest For Midnight Sunshine - Dabber Begins Breeding Bodacious Botanicals