But yes in my opinion a green cfl will work. Lower the watts the better with cfls just to be safe
Check out my Journal!

Looking forward to the Chop pics!!

i just ordered me x10 Papaya seeds from Nirvana!! should give me a good idea what it will turn out like!
Journals:

Come check out my Blog!
How to trim your buds for Drying
How to Prepare Rockwool Grow cubes for use
How to Set up a "Capn-Style" Flowering Machine
GreenThumb J's Modified Heisenberg Tea
A

Show us what you got, man

Let me just say this. This grow has been one of the funnest, most interesting hobbies I have done. I have learned so much before and during my grow from this awesome community. I have researched pretty much everyday on SOMETHING during my grow. Thanks for all the help that you guys and this site has given me.

So moving on! So the chop was yesterday evening/night... I had a small chop party to celebrate haha! Grilled out cooked some good food and enjoyed some spirits and cannabis!

The chop went very well. She was in darkness for 48 hours. I went in the tent and started cutting! I trimmed the fan leaves off as i was hanging them up. Everything went very well! This process took me around 3 hours for everything. So as i was getting to the end of the chop i look down and the bottom of my feet were covered in fan leaves LOL... They all were sticking to my feet as I was chopping and hanging. I know she still had at least 50 fan leaves... I thought i had cut most of them off but especially in the back where I couldn't reach. I believe I was getting high from the smell. It was so strong and smelled soooo good. I enjoyed every minute of the 3 hour "work"...


Smoke REPORT!
Also, Last night after all was cut and hanging to dry i forgot about the main stalk with popcorn buds on the bottom! So i cut the small handful and set the out on cardboard to dry. I didnt have anything to smoke so i took about 5 of the small buds.... I put them in the microwave on a paper towel and put my microwave on "defrost" mode. I heated about 10 seconds and checked them. The paper towel was wet where the buds were! (taking the moisture out) So i moved them to another spot and heated for about 15 more seconds. To my surprise the small buds were dry and smokable! I put them in my ice bong and took the first hit..... WOW!!! Never imagined the aroma and flavor from a 30 second microwave dry. Im so excited for a month cure! So i passed the bong around. Each of us took 2 good hits... Since they were lower buds i was kinda expecting a head high like the sample i took from papaya around day 60. Around 5 mins later I looked around and WOWWW It hit me. I could fill it run from my head all the way to my feet. I was stoned off my ass. I have smoked a lot of cannabis in my life but I dont believe i have ever been so stoned.. especially off 2 hits from my bong. I look around and everyone is staring at the cards on the table (we were playing poker). For the next 3 hours it was hard to move. No one mentioned taking another hit or smoking any more for the rest of the night LOL.... I was satisfied and everyone else was as well. We enjoyed the rest of the night. It was awesome. I dont believe papaya is going to be a "go out in public" smoke lol.... So that was my experience last night. I wanted to post pics and report so bad last night but after smoking i just couldn't do it. I was to relaxed and medicated.

Im going to do a smoke report in a few weeks and keep updating on the process of papaya. I will also try and get a dry weight for everyone. Once they are dry i will take a lot more pics and cut them up and put in jars so you can get a better idea of that they look like. Hopefully you will be able to see the quantity and quality of this awesome strain! I am more than happy with this strain. 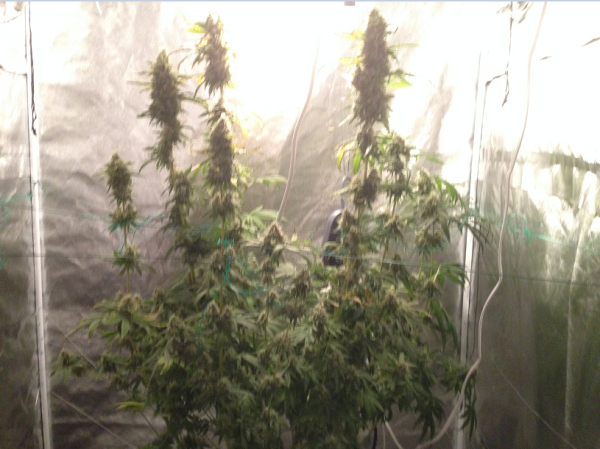 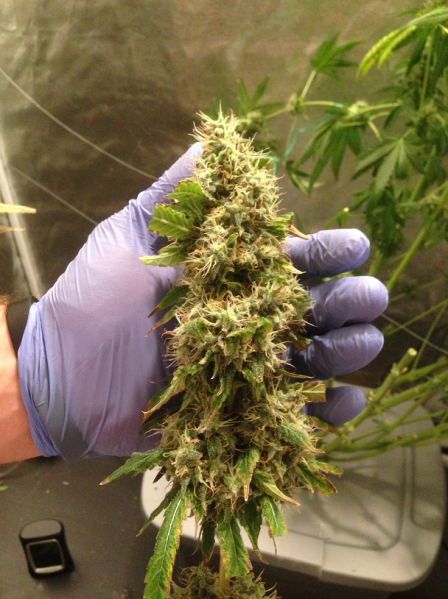 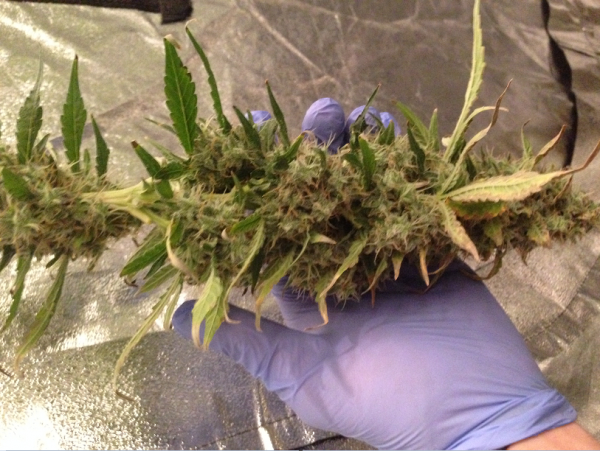 Half way done!!! Alot is hanging on the sides out of the picture! 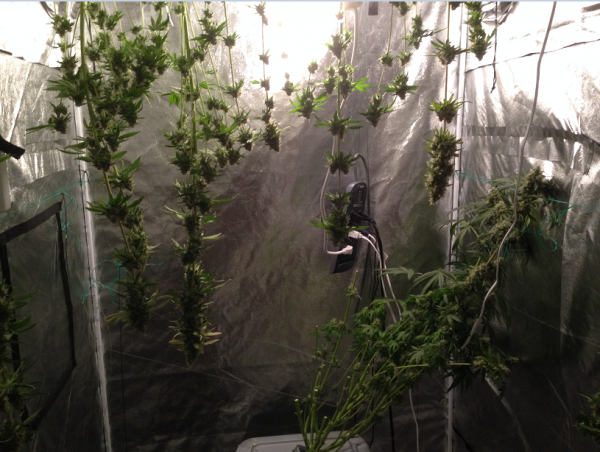 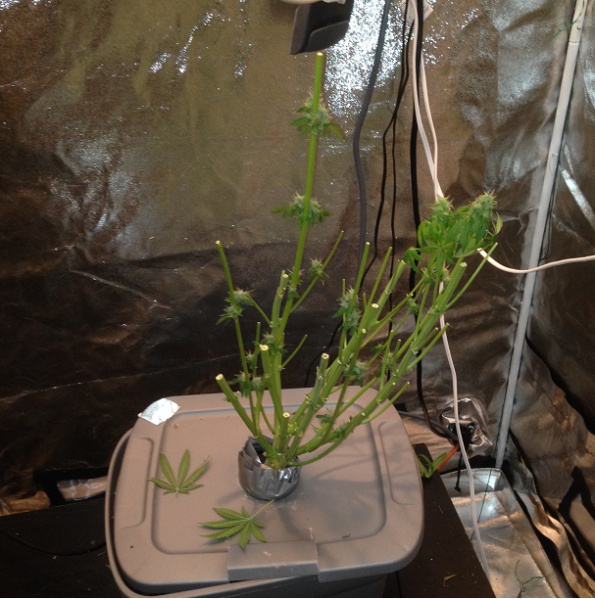 Had to make a X at the top of the tent I ran out of room on the one straight across. This is all of it! 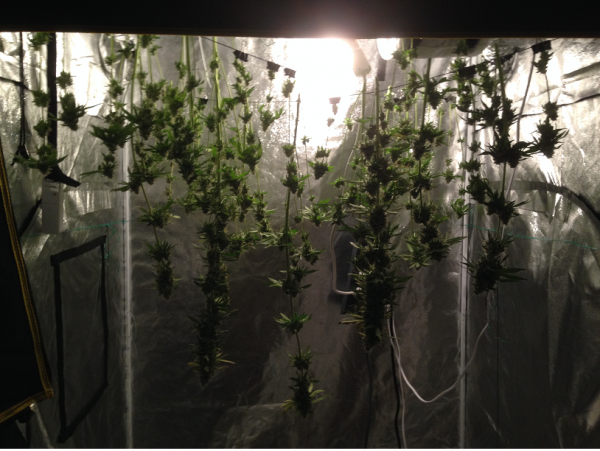 Left side of tent! 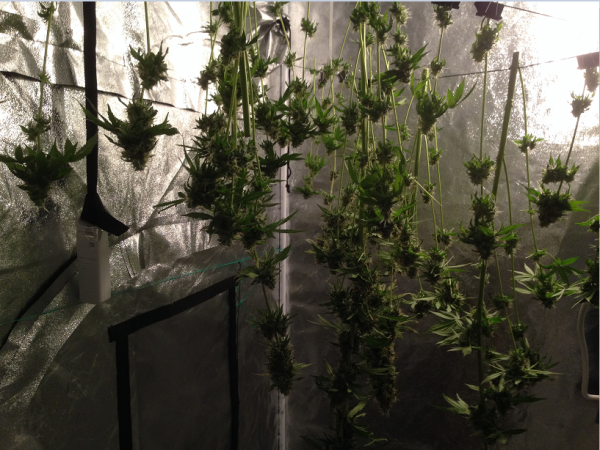 Right side of tent! 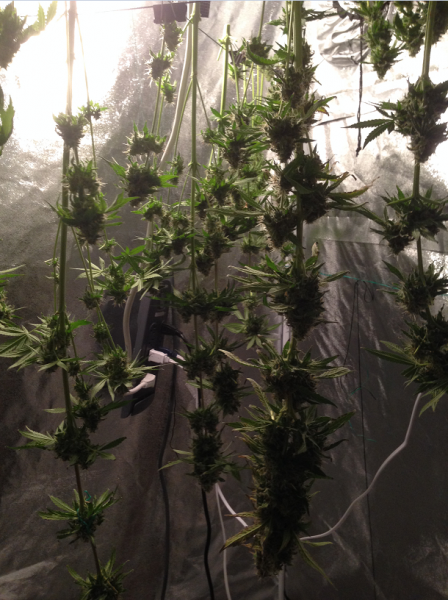 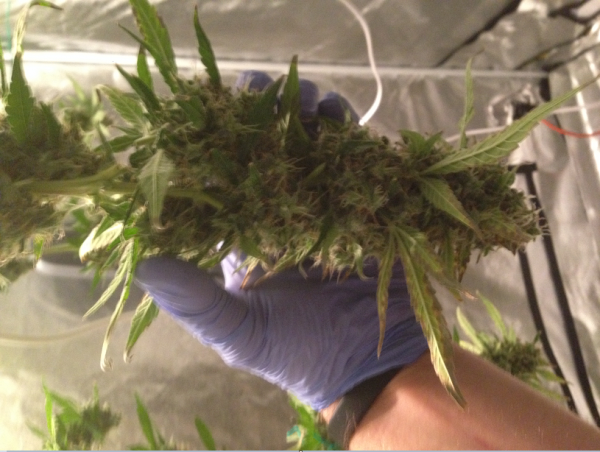 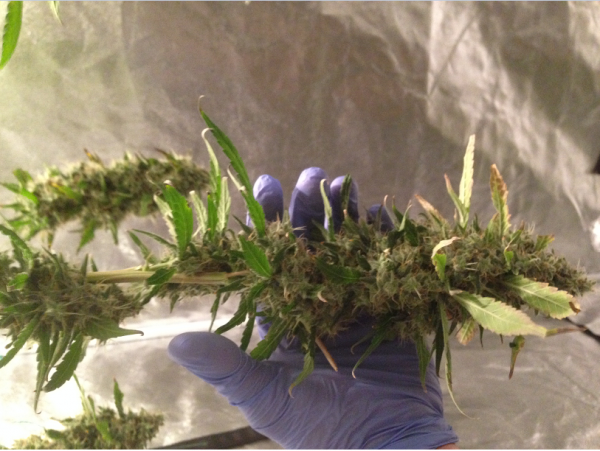 WOW! This cola is HUGE! Look at the buds under the main top cola! They are huge! This thing is 2 feet long! 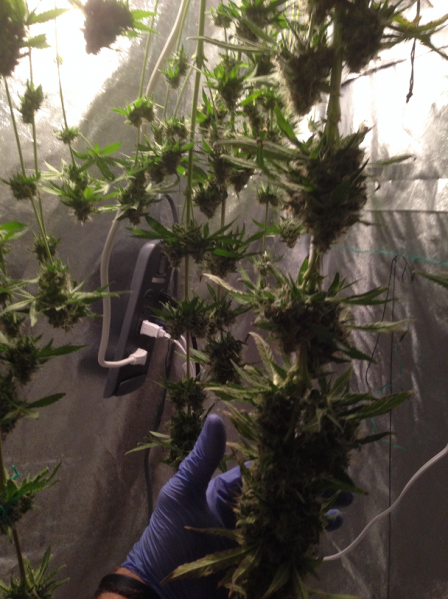 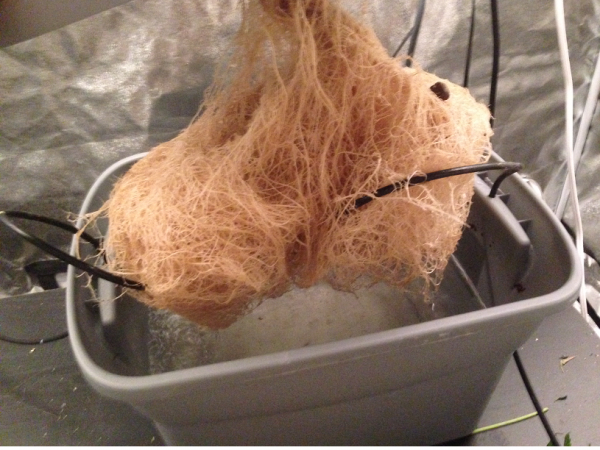 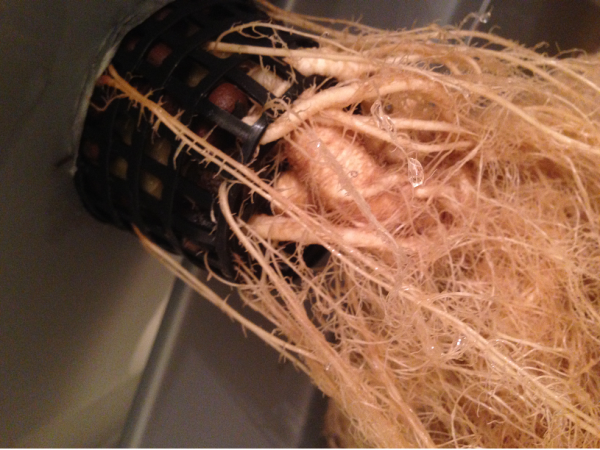 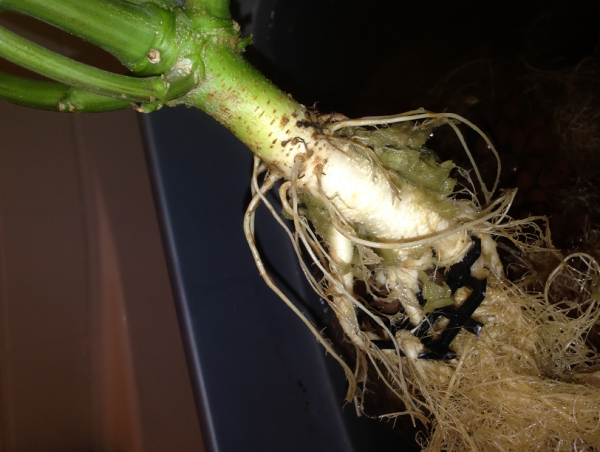 Congrats on your good harvest, man! Have a good smoke of your good stuff for me too!

Check out my Journal!

Congrats! Very impressive first harvest!!! I want to pick your brain soon on your DWC.

/Obi
Your body has cannabinoid receptors for a reason. It is up to you to unlock their secrets and realize their full potential.

Congratulations! Thick nice roots you had up there.

Everything went good! My buds did dry a little faster than i wanted... They were hanging for 4 days. I had a fan inside the tent blowing down to the ground not on the buds but the air was hitting the wall and bouncing back on buds to much. Its ok though. They are not to dry for the cure! They are in perfect curing range.

It was so much work trimming each of those buds... I took me hours to complete all of them! The smaller buds were the hardest. I did get tired of trimming even how much i love the whole process haha...

A little over 5 ounces! Ill take that for my first grow and with CFL's!!! Thats without a lot of popcorn buds the really small ones... I got tired of trimming and just threw them in the bag for making butter (cooking right now)! I for sure could have made another ounce with the popcorn buds.

Thanks for all the compliments everyone!! This grow has been so fun! I will post a smoke report in 2 weeks after a good cure. Right now the smoke is awesome but a little harsh and makes you want to cough if you take a big rip. Hopefully the cure will take that away! The buds at the beginning of harvest were good but not that potent... But by the DAY they are getting stronger and stronger. It amazes me the different feelings from stages of the grow! 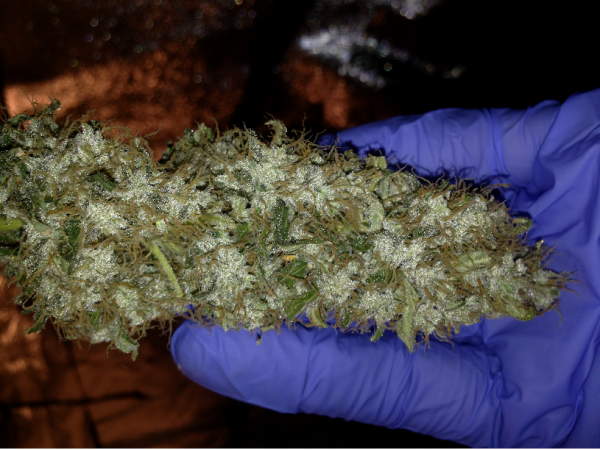 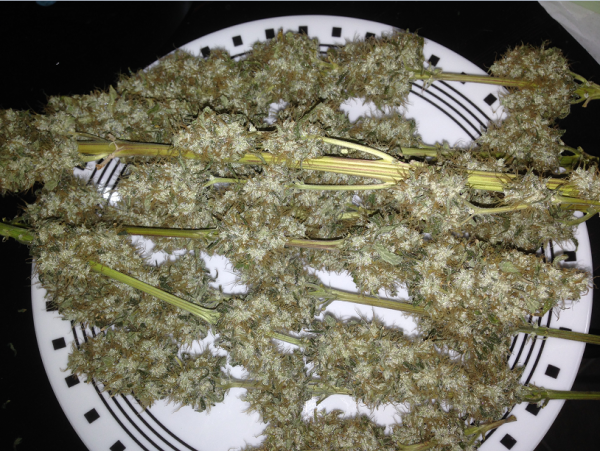 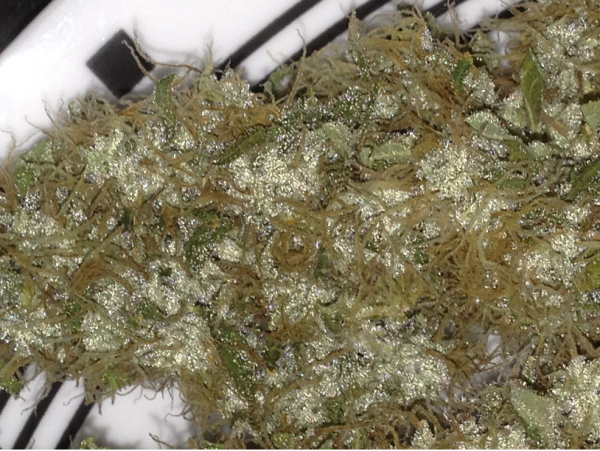 WOW! I wished you could see these buds in person they are completely covered in trichomes! They are all so sparkly!! 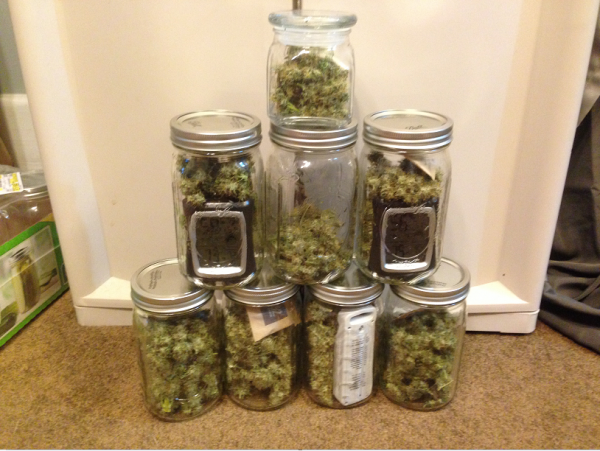 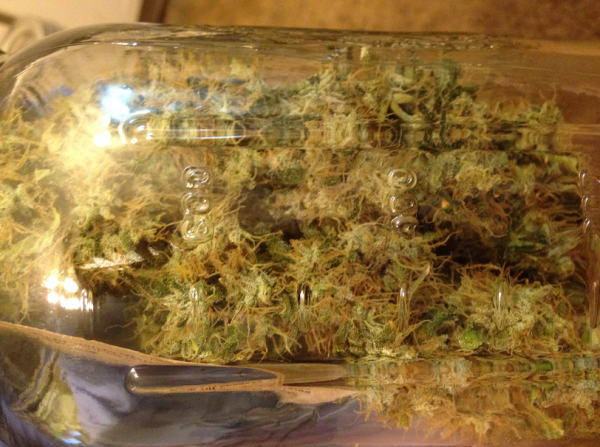 VERY impressive harvest for your first grow! Impressive for a one plant cfl period in my book! + Reps!

Check out my Journal!

mcnasty, Yea I sure hope that the cure takes care of that and it turns into a smooth great smoke! The outside was dry yesterday but today after jarring the RH is around 68-70 percent. So i have left the lid off for a hour or so and now continuing. I will do this every day until it brings it down to the 62% for curing. When i first jarred them the rh was around 56% and i started to get a little scared that they dried to quickly. But after a few hours they raised over the 62%. I will keeping checking and burping them daily!

How long does it usually take for the bud to get super smooth?

Looks beautiful. Hope I can get equivalent results with my grow.

All comments and Pictures are for the enjoyment of the DEA and NSA but any relation to reality is purely coincidental. So if your snooping on me and belong to the establishment please go get bent. :wood:

mcnasty, Yea I sure hope that the cure takes care of that and it turns into a smooth great smoke! The outside was dry yesterday but today after jarring the RH is around 68-70 percent. So i have left the lid off for a hour or so and now continuing. I will do this every day until it brings it down to the 62% for curing. When i first jarred them the rh was around 56% and i started to get a little scared that they dried to quickly. But after a few hours they raised over the 62%. I will keeping checking and burping them daily!

How long does it usually take for the bud to get super smooth?
Click to expand...


a couple of weeks in the jars, vented everyday, will smooth the smoke.
a month to a month and a half will really enhance the flavour of the smoke too and turn em a nice goldy colour