and welcome to my first journal! 4/20 seems like the perfect day to get started.
This is sort of a magic day for me. It will be 86 degrees and it is an absolutely beautiful spring day.

Viewer discretion is advised as my Native American name is “Runs With Scissors”, of the "Black Thumb" Nation. I hope you find these pages entertaining and informative. I’m sure I will be asking plenty of questions in hopes of not turning my garden into a “killing field”. Any and all ideas/support is welcome and greatly appreciated.

This will be my first soil grow ever, and only my second grow in more than 40 years (yes, I am that old).
Thanks to 420 for the knowledge I’ve gained and the help I’ve received so far. Several members enabled me salvage a disastrous first grow (soilless), while others have inspired me to try again in soil. I won’t list members. I hope you know who you are.

Soils: I decided to use Doc’s kit. I ordered it on Feb. 11th and received it on Feb 13th (Thanks!). I mixed the soil the following day and it “cooked” indoors until April 14th. I’m growing one of each strain in Doc’s kit. Alongside these two, I’m growing one of each in organic soil as well. This organic soil is a mix of peat moss, pumice, composted sawdust and sandy loam with amendments. The amendments include: feather, kelp, alfalfa, soy bean and bone meals, worm castings, rock dust, potash, BSM, liquid kelp, sea salt, azomite, humic acid, oyster flour, and myco. I am concerned with my soil mix above (not Doc’s HB). It is my first time running it and I think I mixed it w/o enough aeration and the PH may be on the low side. 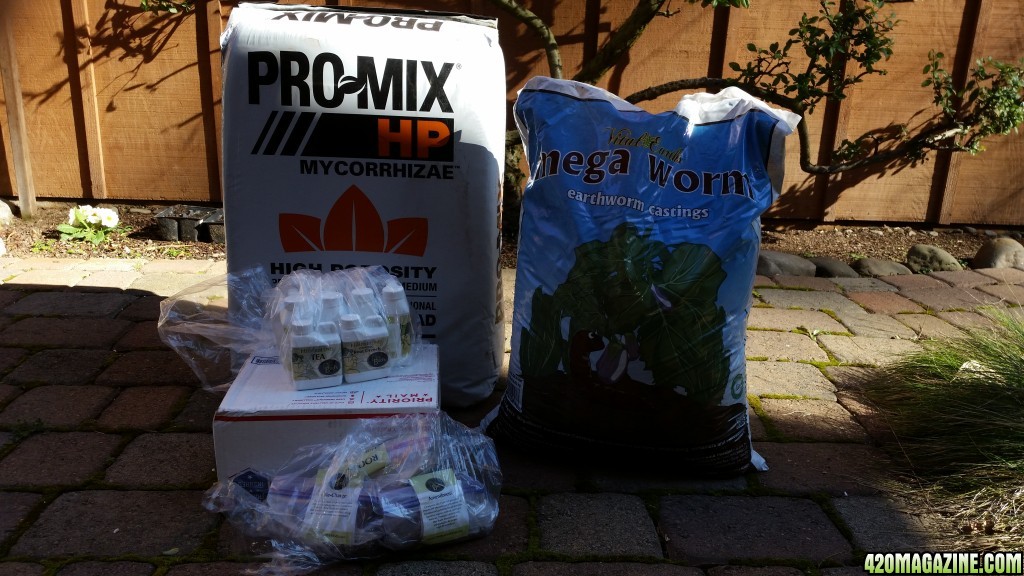 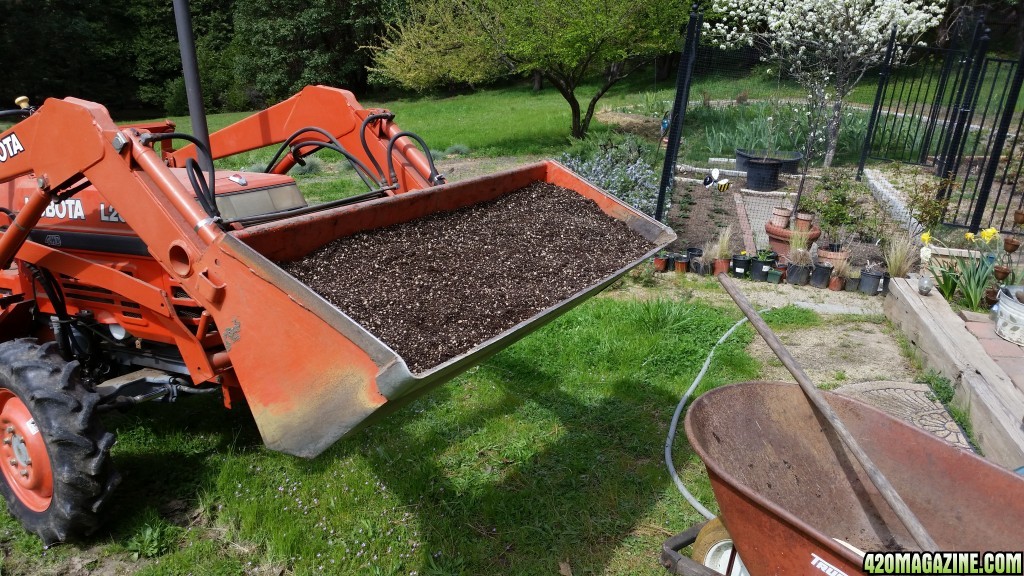 Strains: Indica dominant – nothing too special. A big problem I have is selection. I have no local connections, no seeds available, and a limited choice of clones. I plan on running Ace of Spades (AoS) and Pitbull (PB). Actually, I’m looking forward to this one.

AoS - is creation from TGA Subcool Seeds that takes advantage of the popular sweet and sour combination that never goes out of style. A crossbreed of Black Cherry Soda and Jack the Ripper, this strain has an earthy berry and citrus smell that carries over into the taste with distinctly lemony flavors. Ace of Spades plants grow fast and need a lot of space because they will get both bushy and tall. Flowering occurs at 8 weeks and they are generally large and heavy. These buds are pretty to look at with a range of colors that can include purples, blues, and pinks all coated in orange hairs.

PB - was bred in the early 2000s by U.S. seed company Stoney Girl Gardens as a cross between P-91 and their own award-winning Sugar Plum. This mostly indica strain has an extremely quick flowering time at 6-7 weeks. Just like the dog breed it’s named after, this plant is tenacious, making it a versatile grower indoors or out that produces high yields. Buds will be light green and fragrant, smelling of tropical fruit with earthy, skunky notes. Pitbull’s taste is also fruity and its indica buzz hits fast and hard.

Both strains started as cuttings. The Ace of Spades cuttings were taken from a plant in my first grow (in rockwool mini-cubes). I culled the plant because it looked so bad, but after a few weeks of TLC, it made a turn-around. 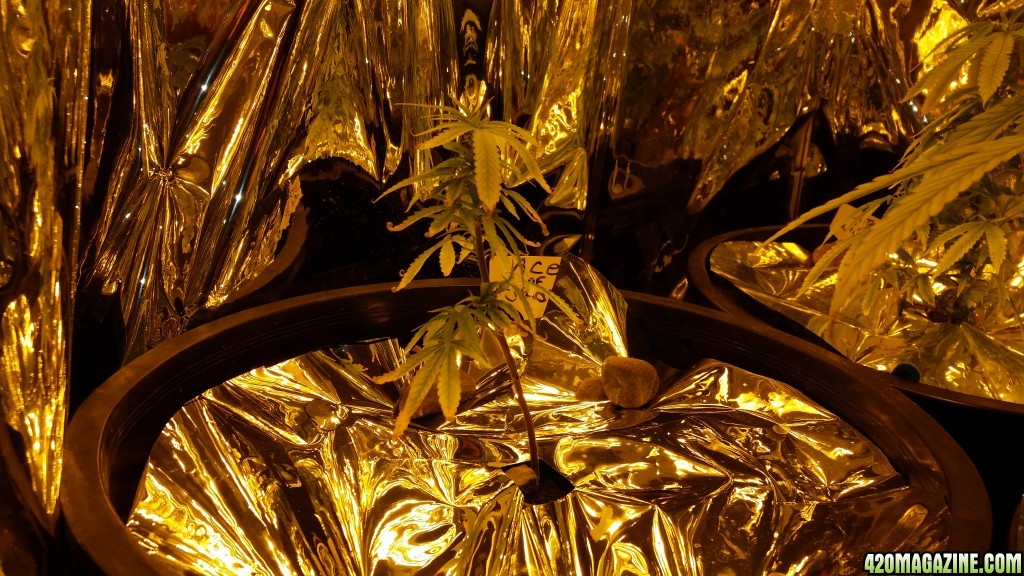 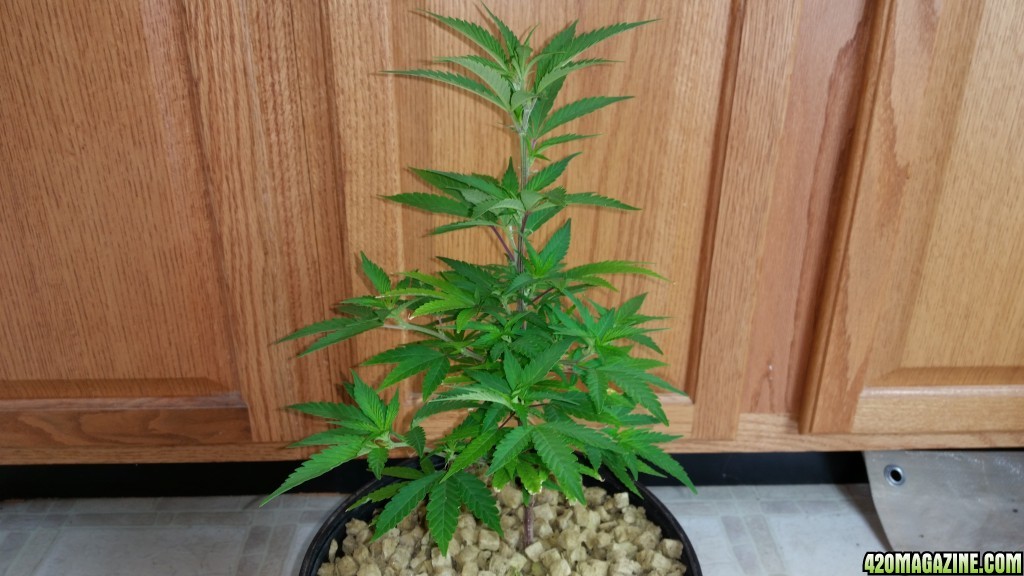 I built a DIY bubble cloner (total out of pocket cost = $1.24), took four cuttings and had 100% rooting success. The best two will join in the fun. 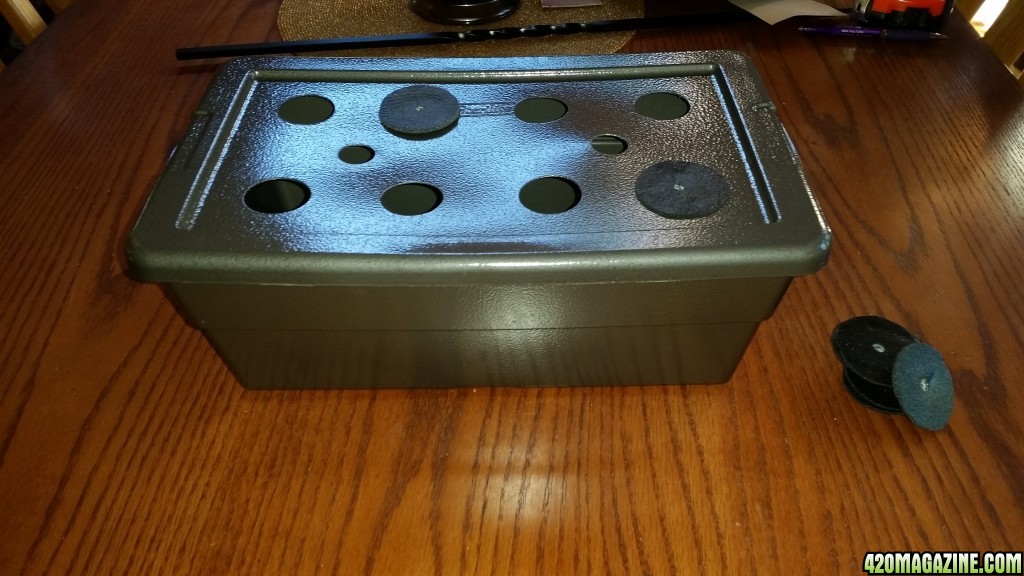 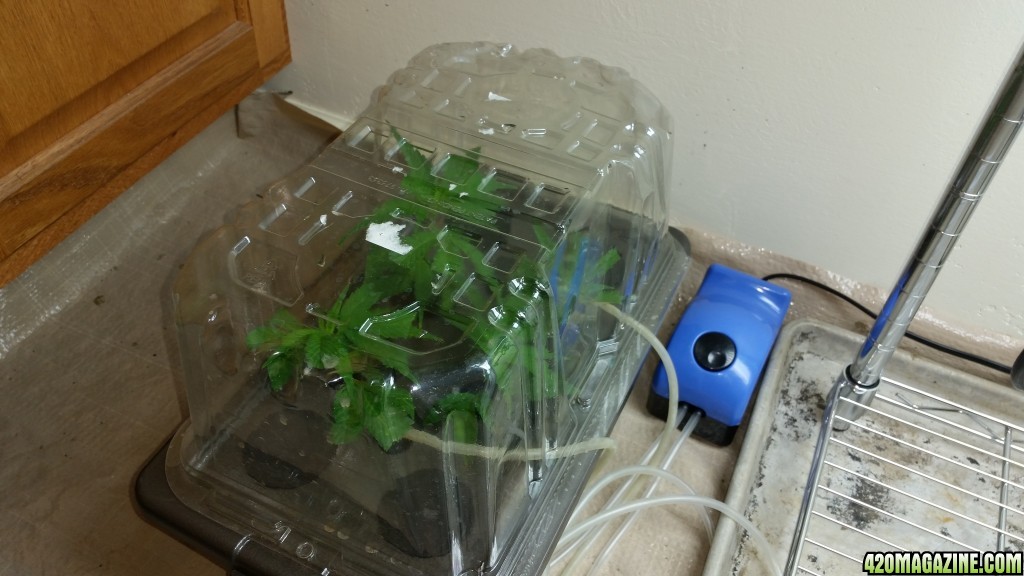 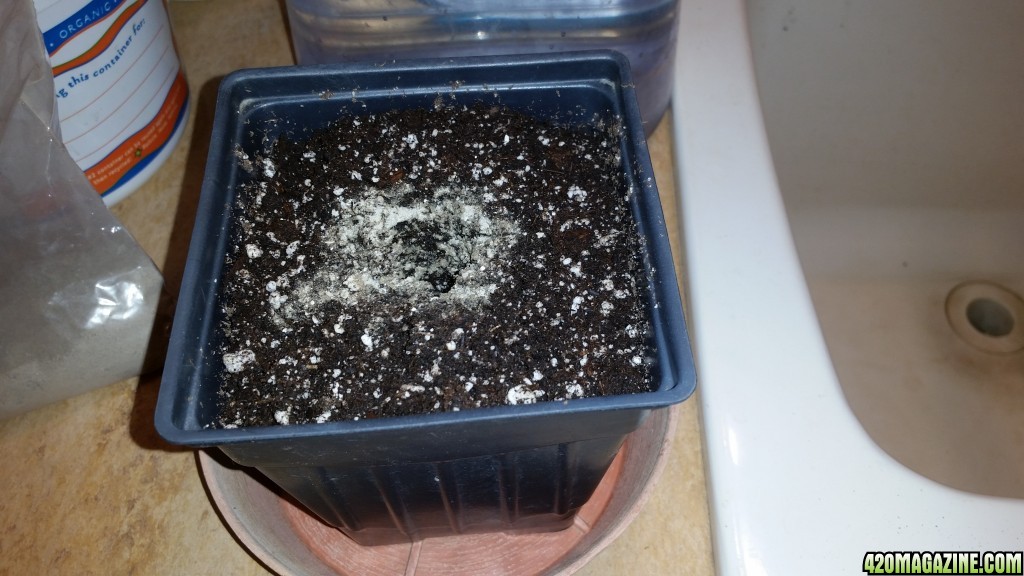 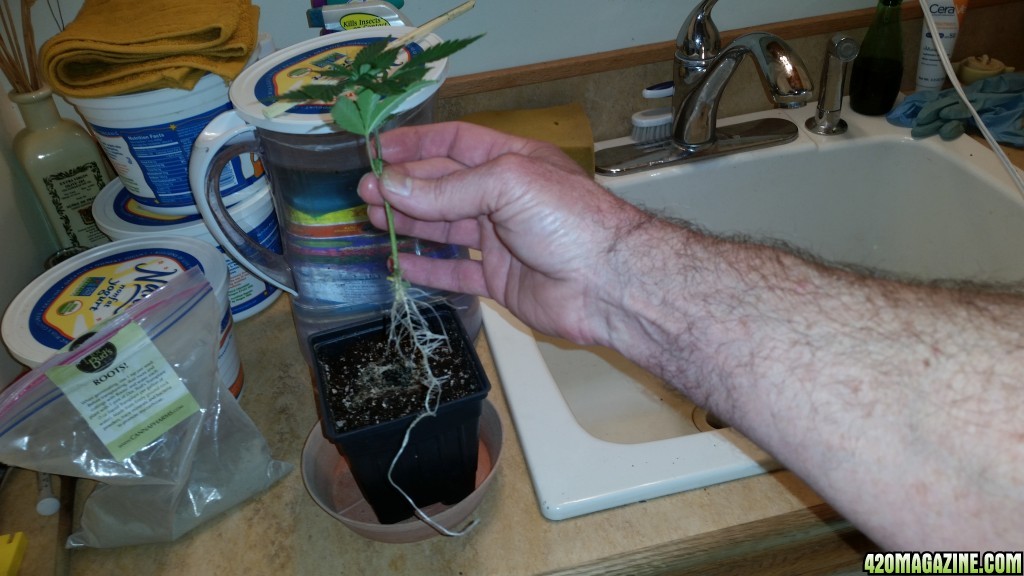 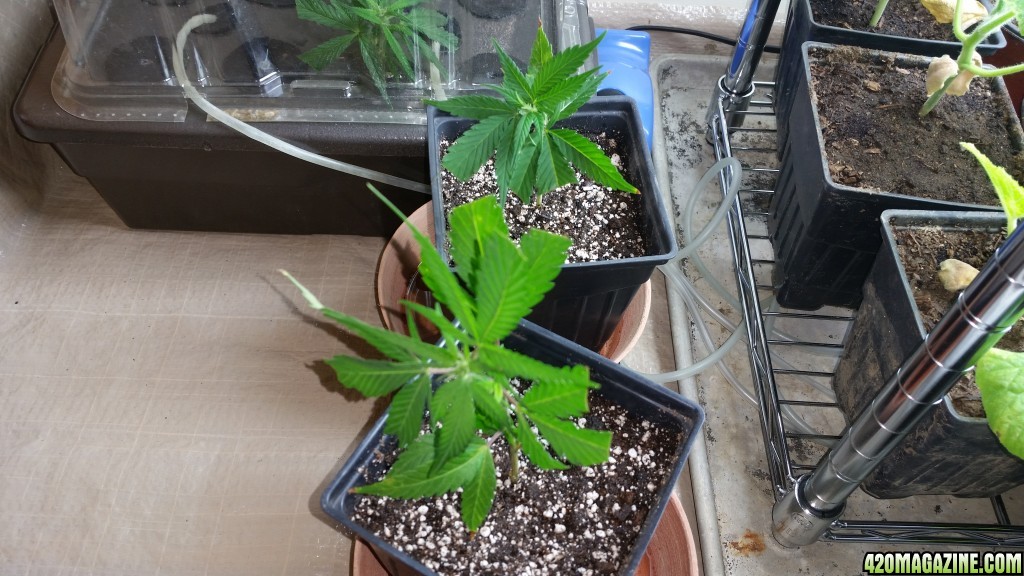 The PB’s were purchased from a local dispensary. PB’s were up-canned to 1 gal. pots on April 14th. Ultimate destination for all is into 25 gal. softpots (already buried in the soil outside). They will go here along the right side: 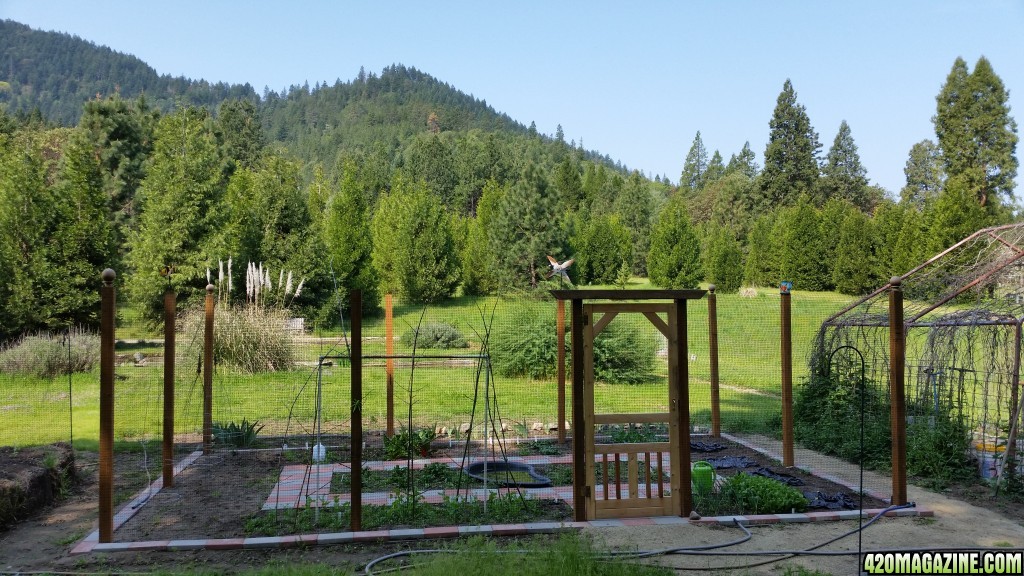 Indoor or outdoor: Yes.
All plants currently in at night. AoS plants to stay under T5’s for a while still. They are several weeks behind the Pitbulls, being moved from cloner to soil only April 15th. PB’s go outside during the day. All plants get the same photo period which is equal to sunrise/sunset on June 1st. About 16/8. 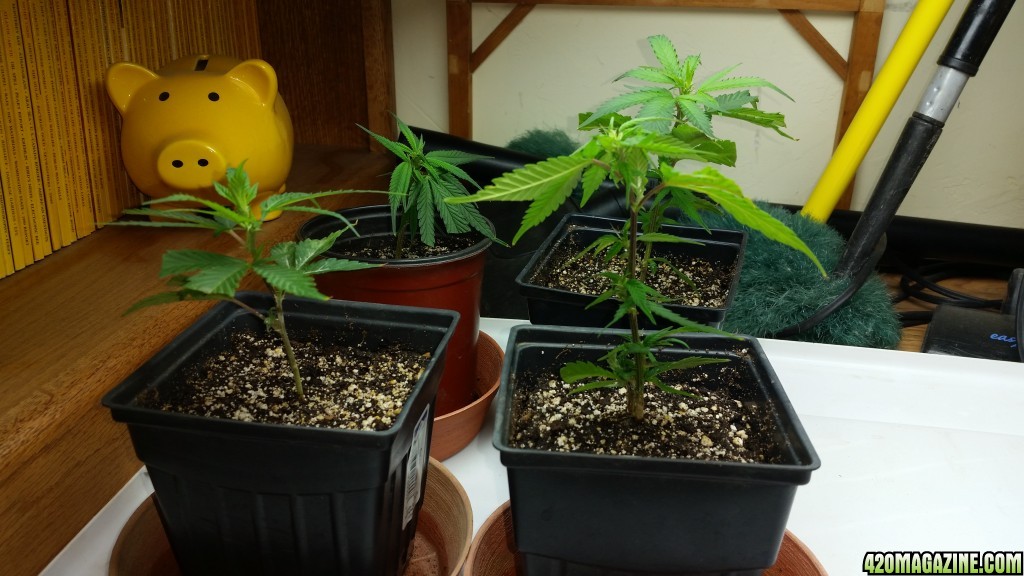 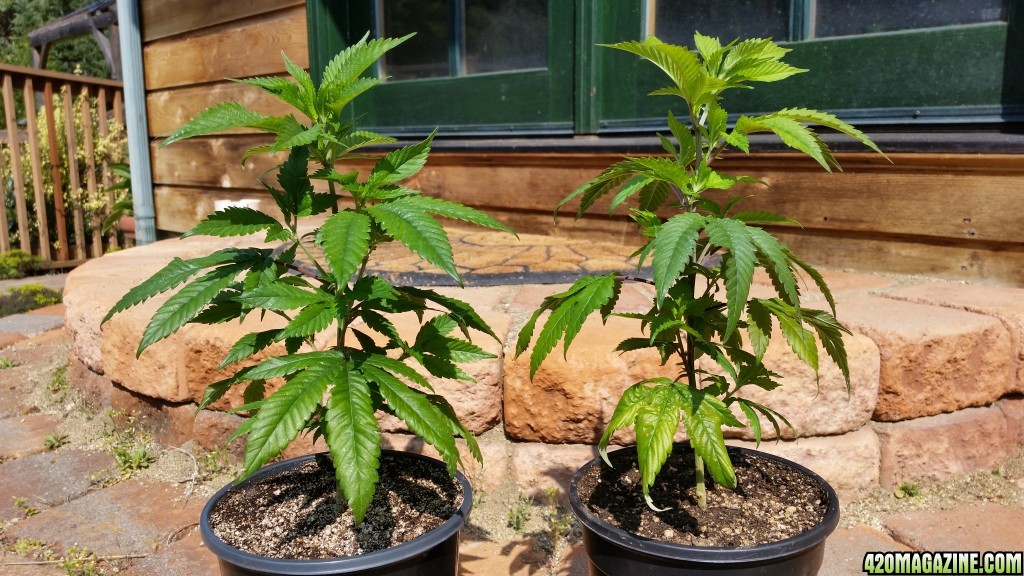 Temperature and humidity: Outside – currently anywhere from 65 to 87 days with nights about 72 (inside). This could get interesting since day temps here often exceed 100 degrees and in the fall we see thunderstorms with heavy rain and hail.

Nutrients: The nutrients are Doc’s kit for the HB gals and just water for the other two. I do have more organic amendment which can be side-dressed or made into a tea. Also EWC and compost for future teas and/or dressing.

I think that covers most of background, so let’s get started!…but where to start? BTW, I’ve never journaled before. From here on I plan to keep my grow updates concise with plenty of pic’s. I am open to any conversations that might arise so long as they remain positive and friendly. I hope you will join me in this innaugral journey.

Hey Major....good start brotha! Glad to have you aboard our H.B. group. Also glad you chose Doc's gear to try your first soil grow....you are sooo lucky you found it....cuz your first grow will blow you away,you'le see. BTW i'm 55 ,soon to be 56 so your not the only old one around here. Oh...and btw i love your backyard....ever nice . I envy you doing plants outside....another lucky one.

If it's ok with you ,i'de like to follow along.....and remember this....luck has absolutely nothing to do with using Doc's. "kit" Top of the day to ya Major...cheers eh.....Duggs.

Lucky indeed!
I am truly honored to have such amazing growers here with me. With 420 at my side, I think this is going to work!

subbed! I'll be lurking around daily.

FWIW, expect a period of stalling and adjustment when you take those hydro roots and try to convert them to soil roots. I recommend spraying every other day with 1/2 strength DeStress until they "hook up." You'll know when they do!

Look to the new growth coming out properly, not the old growth healing up.
D


THE BEST WEED HAS YET TO BE GROWN​
iWeed!​


Major PITA said:
Very cool - the Docs (from B to Z) are here! WOOT!
I've been dutiful in giving De-Stress to the younguns, but only scheduled for 2X/week. I'll change that to alternate days.
Click to expand...

Only until the roots hook up with the soil! Hydro roots are quite different.


Doc Bud said:
<snip>...FWIW, expect a period of stalling and adjustment when you take those hydro roots and try to convert them to soil roots...<snip>
Click to expand...


Major PITA said:
I don't know if this is common or how much difference it will make, but all my cuttings started showing pistils while in the cloner - almost like they thought it was their last chance to reproduce. I know a re-veg takes a while, so I'm hoping this doesn't set them back a bunch.
Click to expand...

Low pH will cause that. What was the pH of your water in the cloner?


Doc Bud said:
Low pH will cause that. What was the pH of your water in the cloner?
Click to expand...

You didn't add anything?


Major PITA said:
No - nothing. Just water.
They all seem happy, with the possible exception of the cutting taken from the apical meristem. Since that's where the bulk of the growth happens, I assumed it would root faster and grow more easily. It was exactly the opposite. The lower branch cuttings rooted much faster and completely. They also look a little stronger in the soil.
Thanks for the input.
Click to expand...

always choose the lowest woody branches to clone. Make sure they have at least 5 bladed leaves.


Doc Bud said:
always choose the lowest woody branches to clone. Make sure they have at least 5 bladed leaves.
Click to expand...

Subbed, what a great day to start your journal.
1st Journal On My High Brix Journey
S


Major PITA said:
Lucky indeed!
I am truly honored to have such amazing growers here with me. With 420 at my side, I think this is going to work!

too bad you don't have a nice back yard

Sounds like potential for a large quantity of tasty danky delight. I wish you wonderful results.
United we stand divided we fall.