Let's get the introduction and preliminaries out of the way. If you followed my previous journal, most of this is redundant. Feel free to skip ahead. Here's the windup, and the pitch...

STRAINS FOR THIS GROW
Returning champions for this season include: Pitbull, Ace of Spades, Grape Ape x Sensi Star, and Golden Tiger(+). New to the roster are: Liberty Haze, Gorilla Glue #4, and Zamaldelica(+). A total of 7 plants. I have complete strain descriptions for each but I figure you know most of them and I don't want to clog this up with too many details. Following is the Readers' Digest condensed version:

GT = Golden Tiger(+)
GT+ was started from seed in late November, '15. It was sexed and moved into a 1 gal. pot mid-January. It was topped a few times and held until March 27 when I moved it into its current 7 gal. pot.

ZD = Zamaldelica(+)
ZD+ was also started from seed but not until early February. It was slow to show sex — not until late March under 12/12. Re-veg has also been slow. She is still in a 1 gal. pot.

LH = Liberty Haze
LH started from a clone I picked up in early February. It was up-potted to 1 gal early March then into 7 gal on March 27.

GG4 = Gorilla Glue #4
GG4 is another clone, but came late to the party (March 27) after my Panama seeds were males. She was up-canned to 1 gal immediately and is still there.

AS = Ace of Spades
AS is a cutting from a cutting of one of my outdoor plants last year. I kept her in a 1 gal pot all winter, up potting to 7 gal. with the others on March 27.

PB = Pitbull
PB is the evil twin to AS. She is another cutting from last summer held all winter in a 1 gal pot and moved to 5 gal. March 27. This is my current favorite strain I've grown. In my last grow it was fast, easy, a good yielder, purple, with a wonderful complex fuel smell, and she packs a punch. A real joy to grow. This time around it has become my problem child and is going to get some special attention. PB got the brunt of our recent storms. I had to remove a couple of broken branches. In addition, I'm convinced she has a root problem. I will be exploring what to do today. Both PB and AS will have their hem lines raised and some internal defol' before going in the ground.

GASS = Grape Ape x Sensi Star
GASS was also started from seed in late November '15, sexed and held in a 1 gal pot throughout my previous grow. An unstable F2 hybrid, she was another up-can on March 27. I grew these in my previous grow but they were never given a chance to shine (almost no veg time). I want to see what it can really do.

Each pots was made from a piece of 2' x 8' metal lath with a second piece cut and wired to the bottom to create gopher cages. They are buried about Â¾ down into the surrounding sandy soil and each holds 10 cu-ft (75 gallons) of the soil mix. I've already found my mix a little too porous. That should be easy to fix in future runs with additional amending. I have five of these pots ready. Because they are so much younger and smaller, two plants will be in smaller pots and in a different location. GG4 will go into a 25 gal. softpot with Promix and organic nute's, while ZD+ will be hanging out in her own 25 gal. softpot of DBHBB.

PESTS
The usual culprits for me: White flies and spider mites without a doubt. Potential pests include: deer, squirrels, gophers, bears, turkeys, moths/caterpillars, and people.

WATERING
Water as needed. It varies a lot. Some plants need it every day (they are ready to up-pot), most about every 4 days currently, The LH went for two weeks and looks very happy.

FERT'S USED
TBD for the 5 big pots. Nothing at first. Trial and error tests along the way. I am trying to stay organic. Fish fert's likely. I can also top dress with more EWC and amendment. Expect experiments on various plants with possible (unintentional) negative consequences. Because of its soil and smaller pot, GG4 will get feedings w/ Earth Juice. ZD will get the usual DBHBB drenches and foliars.

Here are thumbnails (click for larger versions) of where I left off and where we begin:

This is PB. Photo was taken a few days ago. She looks much worse today. She has acted differently than all the other plants since being moved into the bigger pot. PB usually looks over-watered - yet keeps wilting more often than any of the others. Now leaves are drying, necrotic, twisting. FUGLY! I'm not sure what the deal is unless I didn't do a thorough job of mixing my soil (possible). We'll see if she makes it. 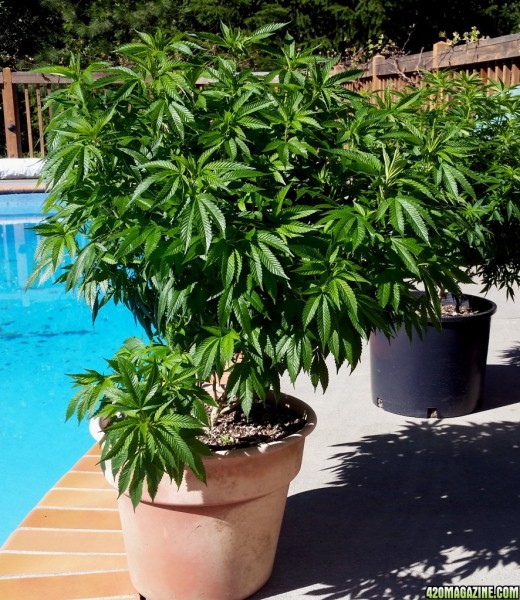 AS She has a bit of a list to starboard from the wind. 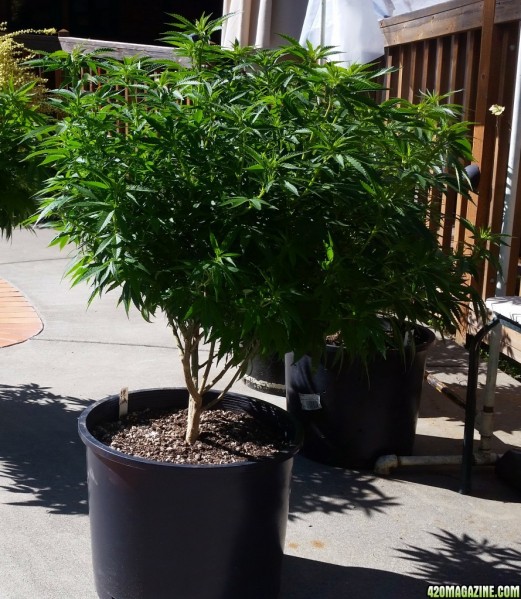 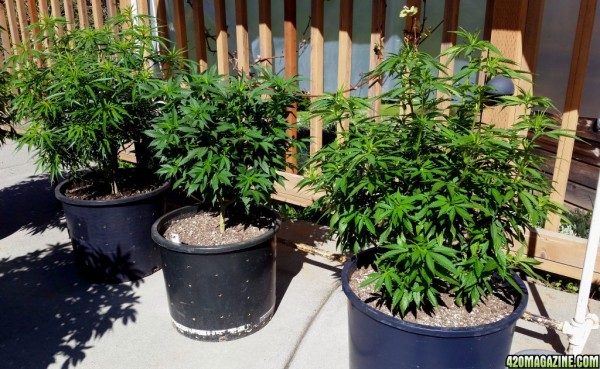 ZD (left) and GG4 (right) still in their 1 gal pots. They are ready for bigger pots - I just need more room. 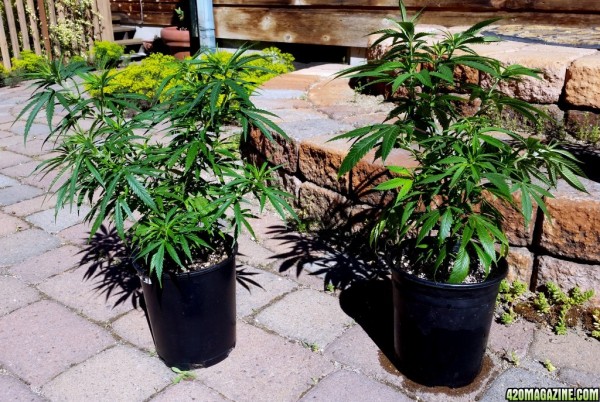 This is the future home for the girls getting the larger pots. 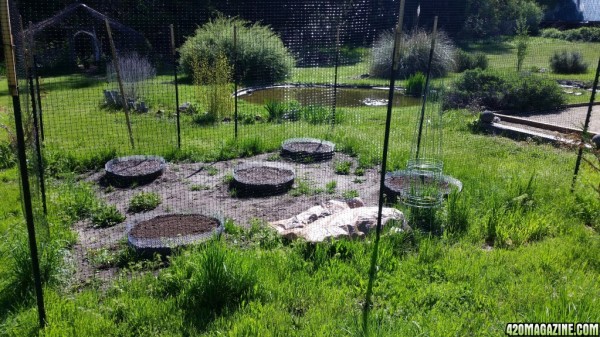 Since days are still relatively short, I am keeping all under lights to make sure they don't flip early. The big pots get a couple of hours in the middle of the night, ala GLR. The small pots go inside for a total of 16 hours of light. I hope to hold them this way until mid-May, but IDK if I will be able to at the rate they are growing.

4-20 is a bittersweet start to this outdoor journal - only because my personal fav' strain that was doing great, is now off to a very bad start. Job #1 is to see if I can find the problem and if you all can help me turn her around. I'll try to document what I see...

Put me in coach, I'm ready to play! I'll ride the bench on this one and watch a pro at work.


nismo12 said:
Put me in coach, I'm ready to play! I'll ride the bench on this one and watch a pro at work.

Awesome and WELCOME! Looks like you are first up to bat!
After you see Pitbull and what I do to her, you may be running for the outfield.


Major PITA said:
Awesome and WELCOME! Looks like you are first up to bat!
After you see Pitbull and what I do to her, you may be running for the outfield.

I'll make sure I get on. Being the leadoff and all

I'll be the kid in the outfield twirling in circles.
420 SPONSORS


Canna Montana said:
I'll be the kid in the outfield twirling in circles.
Click to expand...

Chasing butterflies and picking up dandelions?

And the random violet or 4 leaf clover.
420 SPONSORS


Canna Montana said:
I'll be the kid in the outfield twirling in circles.
Click to expand...

I promised some experiments but this was unexpected. It also happened to my favorite plant. Pitbull has not been happy in its 7 gal pot for some time. I decided to try top dressing with some extra amendment, but apparently went way too heavy with it. I wondered if there might be a problem with the roots since this plant took longer to hook up with the extra soil and was very badly root bound in its 1 gal pot.

I decided to knock it out of its pot and take a look. At least the roots look OK. I repotted in a slightly larger pot after removing as much of the top soil as possible. I am now in the process of flushing it really well to try and leach out some of the remaining amendment. I still don't fully understand why she has been acting differently than all the others in the same soil and the same size pots. Time will tell how successful it will be. Stay tuned... 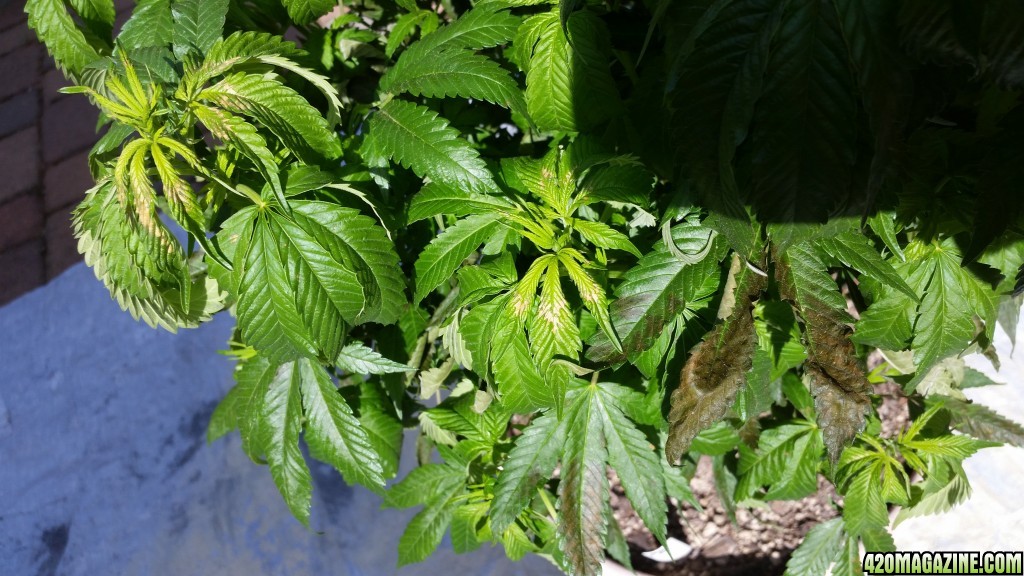 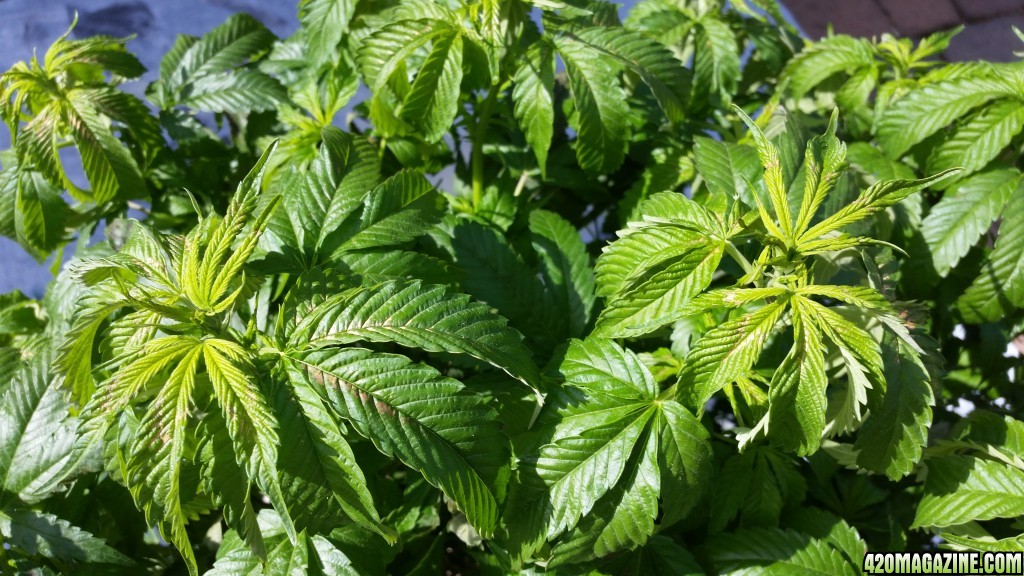 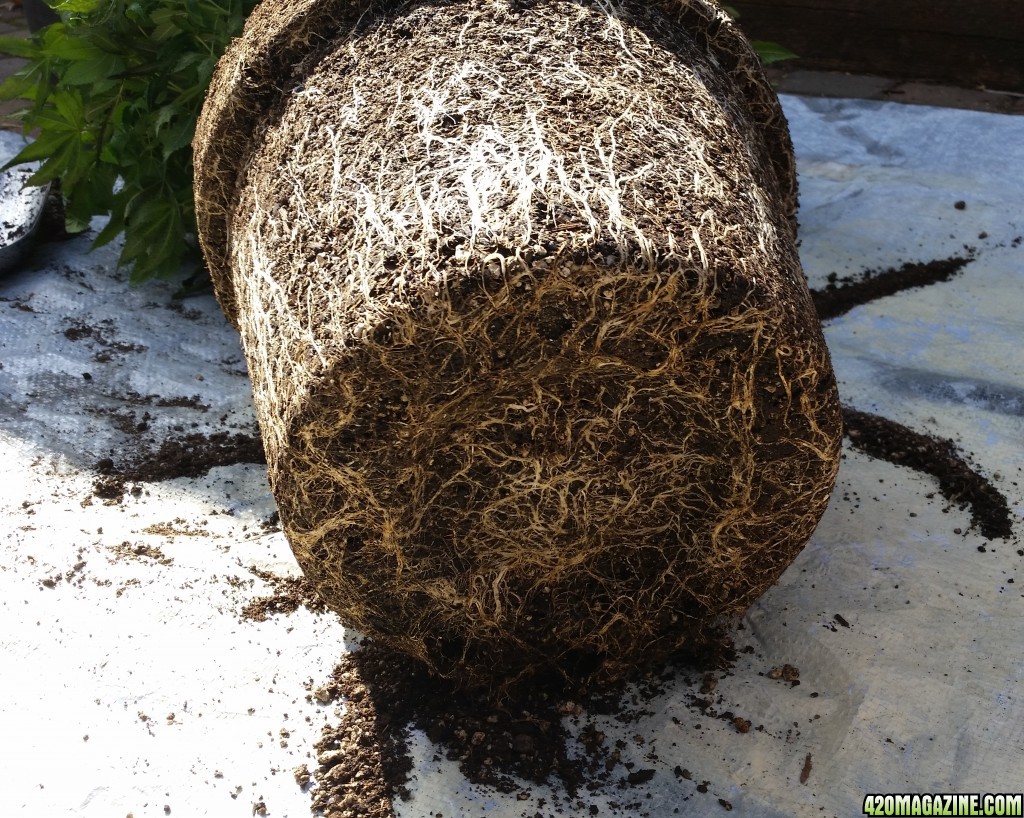 Good day major sir. Present and correct for the long haul. I don't think I've followed one of yours before.
Pitbull looks sad but a man with your experience should pull her round in no time.


Mr Am4zin said:
Good day major sir. Present and correct for the long haul. I don't think I've followed one of yours before.
Pitbull looks sad but a man with your experience should pull her round in no time.
Click to expand...

Thanks again for letting me know!

Lesson learned major, it happens to us all at some point. I refer to them as stoner errors never to be repeated. I remember feeding a 14 day old plant a feed meant for one in week 6 of flower. Sure she looked close to dead for a while but it was best yielding plant at the end. She will come good under your watch.

^^^ I just said the same thing duggan! Well Major Im here!! Lovin the fact that outdoor season is finally upon us "East Coasters"

Stihl Logger Is Back With That Shiny Box Full Of Autos!
Stihl Logger's Shiney Space Box Full Of Randoms - In Dirt Under CFLs
Roll On Up To Our 420 Contest Page! Vote For All Of Your Faves!
Puff On Over & Show Some Support To All Of Our Great 420 Sponsors!

Welcome, Chief! No worries. It is all on me. I didn't announce it or tell anyone.

I wasn't sure if the "gang" would be interested. It looks like this will NOT be a high brix grow. Originally I thought at least one plant would be growing in DBHBB since I had only 4 plants in my last grow and have cooked soil on-hand. But the GT(+)'s are still around and they will be in bloom at least 16 weeks (!). I'm running out of GE, Tea, etc. I don't want to buy more now since it will be a longgg time before it gets used.

Also, I started it on 4-20 and everyone was busy partying while I was busy killing my favorite plant, Pitbull (stupid mistake). Weather this week has not helped at all. The rest of the girls look to be doing well, so it is not a total loss.
I'm glad you found me and I hope you enjoy the ride.

I'm pulling up a chair in the cheap seats Major!

Fish Cake's Tunes & Yours Too, If You Want To Join In

"Without music, life would be a mistake." ~Friedrich Nietzsche~
"Karma moves in two directions. If we act virtuously, the seed we plant will result in happiness. If we act non-virtuously, suffering results." ~Sakyong Mipham~
"When you smoke the herb, it reveals you to yourself." ~Bob Marley~
"It's not whether you win or lose, it's how you play the game." ~Grantland Rice~
"There are none so blind as those who will not see." ~John Heywood~
"No one is truly free, they are a slave to wealth, fortune, the law, or other people restraining them from acting according to their will." ~Euripides~

V
2022 Jelly Rancher Strain From Seed - Soil In Containers: One Indoors & One Outside