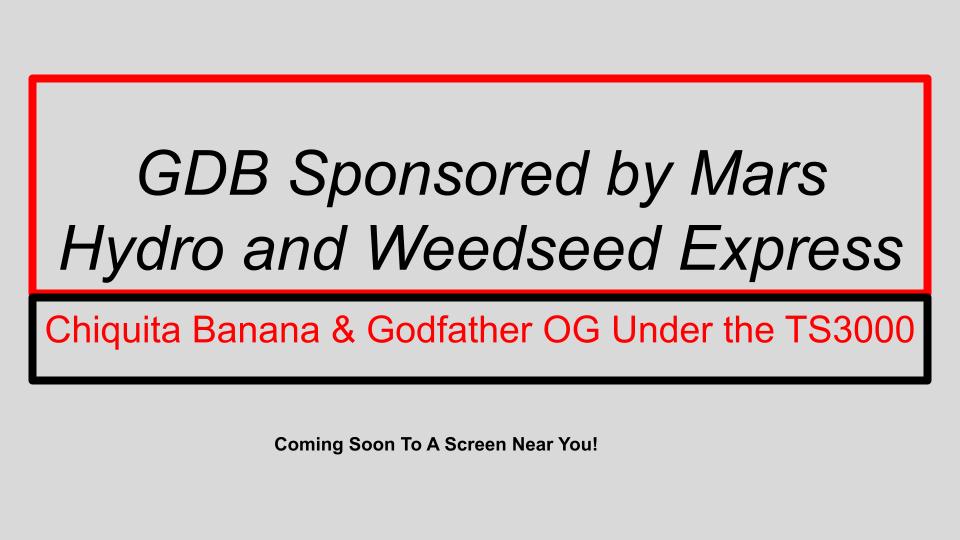 Hydro Bible
The Proper Way To Water A Potted Plant
How I perform LST, low stress training, on my Autoflowers: lots of pics!
How to feed a reservoir: Non recirculating

You're the first in! How do you like the grow so far?

You're the first in! How do you like the grow so far?

It’s great! There is something missing though but I can’t quite put my finger on it lol.
N420s First Grow Journal White Cookies Green Crack (Complete)

Hydro Bible
The Proper Way To Water A Potted Plant
How I perform LST, low stress training, on my Autoflowers: lots of pics!
How to feed a reservoir: Non recirculating

So here's what's going on.

@Mars Hydro sent me a TS-3000 to work with and I'm filled with gratitude for that.

@Weed Seeds Express sent me some beans to grow and I'm giddy about that!

I'll be growing these plants in my 4x4 tent. It has two 6-inch inline fans, one intake and the other out. These are older fans that just won't quit. No speed controllers or any other features, they just blow air. I have 2 9-inch circulation fans hanging in the rear corners of the tent and their heights can be adjusted. I have another combination fan/heater on the floor, the heater function of which I've never had to use, but the fans runs all the time for air circulation down low.

I'm sixty-something years of age and love weed. I've been growing for nearly 3 years. I'm in good health and agile, but I'm lazy as hell when it comes to anything other than playing golf. So while I really enjoy growing this wonderful plant, I'm always seeking the easiest way to do it while still getting quality bud. The less work the better. I repeat, the less work the better.

And so the stuff I use to grow comes in bags or bottles with directions on how to apply it. I don't do an soil-making, tea brewing, composting, etc. And I don't do worms.

Okay, I've been using Mega Crop for the past year or so and I really like it. It has produced some nice plants with little work required. However, at times using it requires some attention to signals from the plant and then the appropriate response from the grower. Not really asking a lot, sort of. Unless you miss a signal or enact an inappropriate response you should do well. But, some of the signals you'll get are due to not using the MC at the proper level. And, some strains requite different amounts of MC. But who's to know which like a lot and which like a little? This might not be a major issue when growing photos (lots of time to correct), but it can make growing autos a real crap shoot.

So those are my issues with MC. Using it got easier over time, and I've gotten somewhat confident in it's use. But I realize you can never be sure about the dosage, especially with autos.

That being said, my current grow consists of 6 photo plants. I've got one plant on @GeoFlora Nutrients with all the rest on Mega Crop. The GF plant only needs to be fed nutrients once every 2 weeks. The amount of the feed is determined by the size of your pot (per their instructions), so once they're in their final home the amount doesn't need to be adjusted. You don't have to measure and dissolve the nutes in water (over and over), you just pour it on the soil and then water it.

The GF plant is just as healthy and happy as the MC plants and appears headed for a nice finish.

So I'm thinking this is a big deal for a lazy, old guy!

Okay, with all of that out of the way...

I'll be growing 2 Chiquita Bananas and 2 Godfather OGs from @Weed Seeds Express. I of each will be grown using Mega Crop and one of each will be raised on GeoFlora. Both will be grow in 4 gallon fabric pots and, of course, they'll be looking up to the @Mars Hydro TS3000.

The WSE seeds arrived today and that's what prompted me to start this thread. I'll be dropping them soon. They will veg for a while in my 2x2 tent under a another @Mars Hydro, the TS1000.

When the 4x4 tent is clear (currently occupied by autos), they'll go in there under the TS3000.

So with this grow, I aim to figure out my standard go-to nutrient.

BTW, @Weed Seeds Express has some of the slickest stealth packaging I've ever seen!

Peace.
Live and Learn (in that order)

I came here to support the GDB inovation team as they invent/create new gadgets. To watch a grow aswell...bonus.

Carcass said:
I'm in!
You're (going to be) killin' it over here,GDB!
Click to expand...

Coming from @Carcass, the Oracle, that means a lot!

Listersmeghead said:
I came here to support the GDB inovatio n team as they invent/create new gadgets. To watch a grow aswell...bonus.

I can guarantee at least one of those things will happen. The R&D unit is kind of...undependable.

Either shout or eat popcorn. You're spitting kernels all over the place!

Strange way of writing 'world leaders in their field'...but ok.

I’m in my friend!

Either shout or eat popcorn. You're spitting kernels all over the place!

Sorry I got excited. I'll sweep up.

congratulations GDB Love the write up, really well written.
I'm along for this one..
Can I sit next to vetsmoke and listersmeghead please
Last edited: Mar 2, 2021
GROWING PAINS, testing and reviewing the Sylstar Gl-4000a also killing growing multiple strains

You want to sit next to Vet? You do know he's a slob, right?

You want to sit next to Vet? You do know he's a slob, right?

I know he is . He didn't even iron his new tent before he showed it off.

But I don't mind, as I will eat all the pop corn he drops.
GROWING PAINS, testing and reviewing the Sylstar Gl-4000a also killing growing multiple strains

Will actually read later!
You cannot flush nutrients from your buds! Click the two links below for the science:
#noflushclub link 1 • #noflushclub link 2
PERPETUAL...Red Dragon, Tin Can Kush, Candidas, Chiquita Banana, Jack Herer, Sour G. Come for the banter!
Do we need to pH adjust our nutrient solutions?
Low Stress Training (LST) - a tutorial
Supercropping - The Hows and Whys
Aeroponic cloning bucket - The Cloninator - build your own!
Rice Balls to Quickly Lower RH in Jars
Great macro pics for under $10

Patient Puffer said:
Superb intro for your sponsored grow. As mentioned, very well written! I can't seem to use emojis, so just know I am ecstatic for you! (Jumping & spitting kernels)
Click to expand...

I'll have to request that both you and @vetsmoke keep your face-masks on while you're here.

Oldhippie59 said:
I’m in my friend!
Click to expand...

Welcome, @Oldhippie59! It's a pleasure to have you.

Today at 7:57 AM
Grand Daddy Black